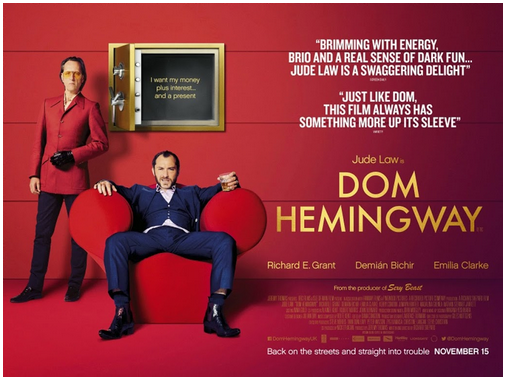 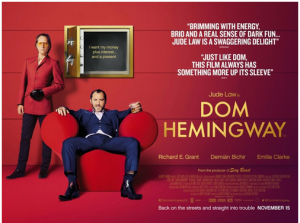 Written and directed by Richard Shepard

I had to take a look at Shepard’s IMDB page to remind myself what else he’s done, and the title that jumped out at me was The Matador. It had a plum role for Pierce Brosnan as a hit man, which served as a nice reinvention immediately following his stint as 007. In some ways, Dom Hemingway skates along very similar ice, a comedy that isn’t so much funny as awkward and unpredictable, a rambling piece, with one big performance right in its centre. I’m not sure that Jude Law’s career needs the reinventing, mind you, but there you go.

He’s the title character, a British safecracker who went away for 12 years and is finally getting out. He never ratted out his comrades, not Dickie Black (the wonderfully droll Richard E. Grant, so great to see him in this and recently in HBO’s Girls ) nor Mr Fontaine (Demian Bichir), so accordingly he expects to be rewarded for his trouble. Off he and Dickie go to France to get their money, but given Dom’s serious rage issues and inability to take any responsibility for his decisions, it’s no surprise that things continue to go badly for him. His ill-gotten wad of cash doesn’t stay long in his hands. Worse, like a much less discrete Terrence Stamp from The Limey, he marches into a garage to beat the crap out of the man who married his wife after he went to jail, further alienating his now grown-up daughter (Game of Thrones‘ Daenerys Targaryen, Emilia Clarke).

Law has clearly been encouraged to go big here, and so he does. The film is a collection of his foul-mouthed screeds, while the other characters (and the audience) stand dumbly about as he rants about the injustice of the world and his long collection of bad breaks. The film opens with a monologue, an ode to his penis, the thing he seems to love the most. Naturally, at one point, someone threatens to remove it.

The problem is Law’s performance dwarfs everything around it, including the film itself. Law goes so big, he’s almost a cartoon. It’s difficult to feel much for him at all.

If this was a Guy Ritchie picture, the ensemble would have carried the thing, along with a machine gun wit Dom is missing. Or if this was more like Jonathan Glazer’s Sexy Beast, Dom would have been more frightening, channeling the existential dread at the heart of every good British crime picture. Unfortunately, Dom Hemingway falls somewhere in between those genre milestones.

That’s not to say I wasn’t impressed with how far Law is willing to go, and I certainly enjoyed the other performances and incidental elements—the London locations are wonderful—but somewhere in this script is a more grounded character drama, or a more gritty crime picture, or a more thrilling and fun heist movie. Too bad it doesn’t quite manage to be any of those.

Dom doesn’t even get the best line in the movie. Dickie gets that, and it’s about his shoes.