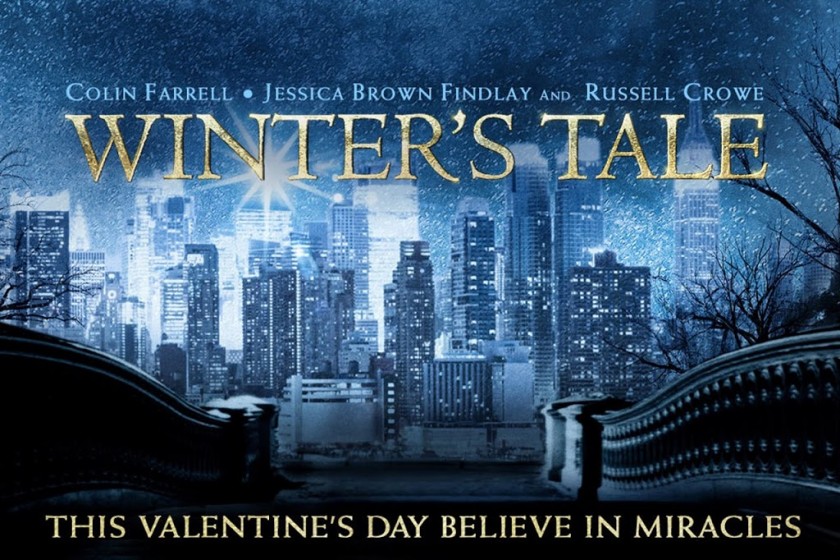 Written by Goldsman, adapting the novel by Mark Helprin

When I saw the trailer for Winter’s Tale back in January, I was not impressed. It looked like the cover of a Harlequin Romance come to life. The advance buzz wasn’t terribly promising, either. It didn’t help that Goldsman, mostly known as a writer-producer, has been responsible for some of the most unduly appreciated  middlebrow entertainment out of Hollywood in the past couple decades.

Then Neil Gaiman recommended the film. That shocked me. And it was enough to get me into a screening of this Valentine’s Day release.

And y’know, it has a lot more going on with it than I expected. As Neil argues, it’s isn’t just about “love between two attractive people who want to do kissing.” It’s a messy movie about magic.

The story follows orphan Peter Lake (Colin Farrell, typically authentic and emotional) who rises in the ranks of the thievery class of early 20th Century New York City. Though he’s never lived in Ireland, he has a pretty distinct Irish inflection, which presumably he got from his mentor, the deeply evil Pearly Soames (Russell Crowe). When we find Pete, he’s really ticked Pearly off something fierce, and needs to get out of town. Fortunately he finds a magical flying horse to aid him in his getaway. He’s almost home free when the horse points him to the abode of a wealthy young woman, Beverly (Jessica Brown Findlay), stricken with consumption. And though his intent is to add to his personal wealth with her belongings, he finds himself beguiled by this brave but infirm lady.

Even as I’m explaining these plot details I’m well aware it sounds ridiculous. Winter’s Tale is really a film you have to surrender yourself to if you’re going to enjoy it. It’s a fairy tale and accordingly offers a magical realist world—scenes of love, magic, immortality, and destiny. Oh, and time travel. It isn’t long before Pete finds himself in present day New York City, and crosses paths with Virginia (Jennifer Connelly) and her daughter Abby (Ripley Sobo).

And there’s a trip up the Hudson to a rural estate that appears to be entirely encased in icing sugar. Oh, that’s supposed to be snow? Riiight.

What Winter’s Tale does is commit. Even in the places where the score is syrupy, where the in-studio cinematography is painfully obvious, where it makes nearly no sense at all, the movie never fails to entertain. It’s whacked, but it’s true to its own universe. And I have some time for that.

Perhaps the biggest reason to see it is to witness Will Smith as Lucifer. I mean, this wholesome dude has made a career playing heroes, and now someone thinks of him as the fallen angel? It’s so perverse it’s actually kind of an event when he shows up on screen and gives a deeply unscary and uncertain performance opposite Crowe.

Russell Crowe is having more fun here than I’ve seen in ages. People may forget Crowe started in Hollywood as a villain, and I think it’s what he’s still best at, being threatening.

There are other pleasures with and without the silliness. New York through the ages is huge and impressive, a character itself. Brown Findlay has a sweet charm that sparks with Farrell. I enjoyed her hypnotic, husky voice. People tell me she was once on Downton Abbey. I need to catch up on that.

To conclude, while I recognize how wrong some of this is, and I did try to resist getting swept up in it, I can’t deny I enjoyed much of it. So, I’m with Neil. And maybe you will be, too.