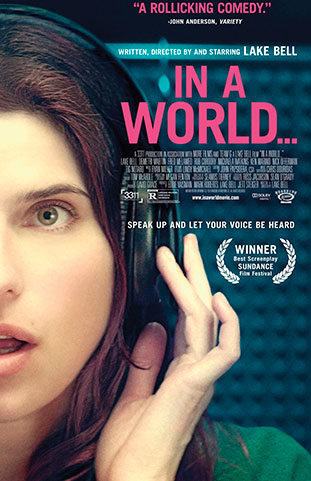 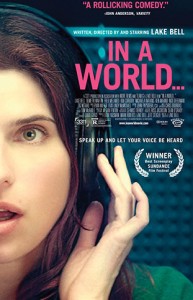 Written and directed by Lake Bell

A lovely indie from writer/director/actor Lake Bell, In A World… manages to make a few very coherent and political points about women in Hollywood while telling a feather-light story set in the moribund romantic comedy genre. When you think about it, achieving all that is kind of a wonder.

Bell is Carol, a voice coach working in Los Angeles, instructing actors like Eva Longoria (gamely appearing as herself) how to speak in cockney accents. Carol doesn’t have a whole lot of self-esteem, which is at least partly her father’s fault: he’s Sam Sotto, (Fred Melamed), a titan in the Hollywood trailer biz, a guy who’s never given his daughters much credit for anything. Carol lives at home with him, but when he invites his much-younger girlfriend to move in, Carol goes to live with her sister, Dani (Michaela Watkins), who works as a hotel concierge and is married to the slobby Moe (Rob Corddry).

The romantic comedy component of the tale arrives when in a moment of weakness, Carol hooks up with another voice-over hotshot, the scuzzy Gustav (Ken Marino), even though she’s really attracted to studio engineer Louis, (Demitri Martin). I can’t really figure out the appeal of that guy: he looks like he’s about 13. But anyway, in the second act nice-guy Louis helps Carol put together an audition for her big opportunity: a voice-over gig for the trailer on a major fantasy movie franchise.

The romcom tropes are fairly predictable, but Bell plays the frequently befuddled but always charming Carol a little like Annie Hall. She’s adorable, and in a world (see what I did there?) so hermetically sealed by a community of men—there are no women’s voices in movie trailer voice-overs—we get a good look at just a few of the challenges women face in these tinseltown old boys clubs, without being bashed over the head by political screed. The sharpest point, made by a cameoing Geena Davis—in real life a campaigner for women in Hollywood—will hopefully resonate after the credits roll.

Did I wish Sam wasn’t such a cartoon? Uh-huh. Did I want Dani and Moe to exhibit just a bit more complexity while they wrestled with their marital problems? Yup. Did my eyeballs chafe at how flat and dull the movie looked in general? Sure did. But did I love the inside look at a quirky part of the movie biz, the laugh-out-loud gags and Lake Bell’s winning script and performance? Totally.