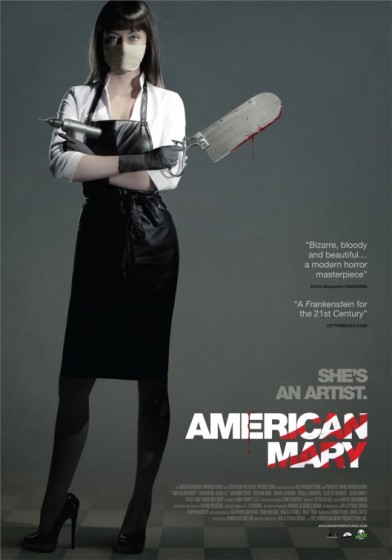 Written and Directed by Jen and Sylvia Soska

So great to see a homegrown horror with some new ideas. And especially good to see Ginger Snaps‘ Katherine Isabelle again on the big screen. The new ideas in the Soska twins’ film are front-loaded. We start with Mary, a medical student who seems to really know her stuff, but still gets a lot of grief from a fascistic professor, Dr Grant (David Lovgren). She’s in need of money, so goes to the local peeler bar to audition for the talent wrangler, Billy (Antonio Cupo). As it happens, he’s into heavier shit than just running the establishment, and when he sees Mary’s in school to be a surgeon, has her come downstairs from the bar to sew up the face of a guy with serious lacerations, which she does—no questions asked—for five grand. Before long she’s learning about the body modification community, and how there’s more money to make.

The film is deliciously dark and slick, very much rainy, grey Vancouver, both indoors and out. Isabelle is magnetic as ever, and when the film takes a turn into revenge thriller territory, she convincingly delivers pain, violation and numbness, as well as some discomfiting moments where we see the intensity of her vengeance. I was disappointed the transition she makes from victim to avenger is a bit rushed. This is a picture that splashes around, never quite finding its pace or focus. The second act is probably the most interesting as Mary drops out of school to provide unique surgical procedures for people looking for that kind of thing. The film’s writer-directors show up in a delightful cameo as sisters wanting something extra special. Unfortunately, everything falls apart in the homestretch. An unexpected romantic liaison between Mary and Billy is badly botched; it’s not clear how either character really feels for the other or why they behave the way they do. And an act of violence comes out of nowhere to end the thing too suddenly and without any real emotional payoff.

But the Soskas are working with some interesting material here. They’re certainly body horror disciples of David Cronenberg. With that in mind, I’ll be excited to see what’s next from them.