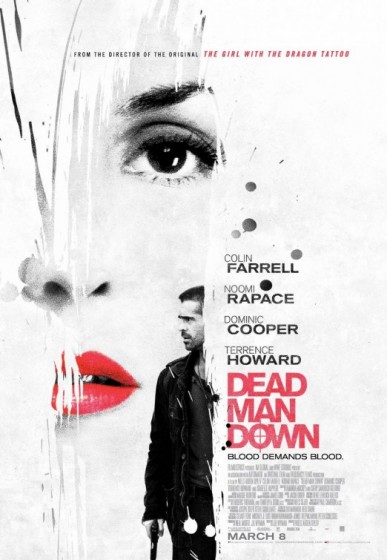 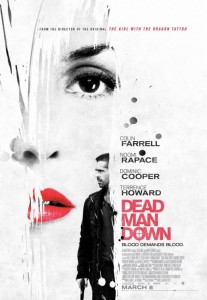 There were a few things that drew me to this relatively unheralded release in the wasteland of Hollywood’s March schedule. Oplev is the director of the first adaptation of The Girl With The Dragon Tattoo, the Swedish edition. The trailer had a promising sheen to it. And I don’t think Colin Farrell’s leading man qualities get enough credit.

What I discovered since is that writer Wyman penned the unloved Brad Pitt/Julia Roberts vehicle The Mexican, as well as some episodes of recent scifi drama Fringe. And amongst the producers of the film is the WWE. Yes, the wrestling entertainment people are getting into movies, and this one doesn’t even star The Rock. (Sorry, Dwayne Johnson.)

So what do we get from this unholy alliance, the first US film from a European genre director who’s shown some talent? A film that reflects its peculiar conglomeration in the creative staff, providing a healthy physique of entertainment value in a neo-noir gown.

Beatrice (Noomi Rapace) is a former beautician living in an unglamorous New York highrise with her mother (Isabelle Huppert—great as always, though the lens gets a strange vaseline sheen in her close-ups). Beatrice was in a car accident that disfigured her face (though quite lightly, local kids’ taunts notwithstanding) and is looking for revenge against the drunk driver who got away with it with barely a slap on the wrist. In a Rear Window-esque plot twist, she sees her neighbour Victor (Farrell) murder a dude, and proceeds to blackmail him. Victor has his own vindictive mission, to make life difficult for his crimeboss associate Alphonse (Terrence Howard), who is responsible for the death of Victor’s wife and child.

From the beginning, you’re better off knowing that the convolutions of the plot—the unnecessarily dense plan Victor is putting together, for example—is the stuff of thriller conjugation and totally unrelated to anything approaching realism. However, what keeps you engaged are those unlikely permutations. He’s deeply embedded in Alphonse’s organization, to the point where he actually goes out of his way to save his life in a shootout with a drug baron. Why does he do it? And why he’s taking so long to exact his vengeance? Is it all about timing? Or could it be, as his arms connection/uncle-in-law F. Murray Abraham suggests, a reluctance to let go of the hate?

And though the first act sets up this dual (duel?) revenge drama, the date Victor and Beatrice go on early in the running where they sniff each other out is the peak of her femme fatale power, a power that diminishes as the film spends more time on his plans than hers, unfortunately setting her up as a pawn.
That’s not to say there’s a more effective thriller hidden in this one, just an alternative one where she has more to do.

The incidental pleasures of Dead Man Down—a terrible title, really—include the cast, especially a great cameo from eternal tough guy Armand Assante as a crime lord, and a solid supporting role for Dominic Cooper as a suspender-sporting, low-rung thug with keen detective skills and ambitions beyond his station.

With the sterling cast carrying the plot, Oplev has plenty of confidence with camera and tone. His European touch, bringing with it a dollop of melodrama, is deadly serious, but it holds together the universe of the film almost to the end. Even more important is the editing and pace: it doesn’t slow down long enough to really examine. A seemingly pointless Manhattan sniper assault is buttressed by a solid chase sequence, and then a guy is eaten alive by rats in the hold of an old yacht. Don’t ask, just go with it.

Those plot threads, fraying but still cohesive, do unravel in the final act. I couldn’t help scratching my head on how the mystery number 719 applies if the date in question is the 19th of June. Maybe that was a key piece of information I missed. And a concluding shootout, while a little less bloody, is as grandiose and ridiculous as the one at the end of Django Unchained, and sends the picture entirely off it’s slick, noirish rails.

Still, fun getting there.