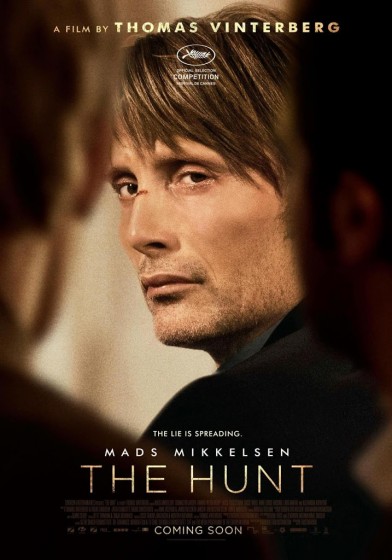 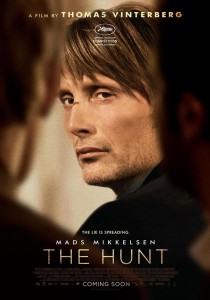 It’s not very often I walk out of a screening room totally wrung out, where I white-knuckled right through a movie. I remember it happened during Match Point. Happened again last night at The Hunt. It’s another of the collection of excellent Danish films showing at this year’s AFF.

Mads Mikkelsen has had a great career in his home country. He’s been on my radar since he played Le Chiffre in Casino Royale, and I thought he was great in Nicolas Winding Refn’s Valhalla Rising. Here he’s Lucas, a man who works in a kindergarten in a small Danish town, where the somewhat-imaginative daughter of one of his best friends says he exposed himself to her. Busybody adults take her comments very seriously, and word spreads fast through the community. Lucas finds himself ostracized by almost everyone, including most of his buddies. He loses his job, his girlfriend and the chance to be reconciled with his son who is living with his ex-wife.

The movie, directed by Thomas Vinterberg of The Celebration fame, channels much of that film’s queasy realism here. You’d have to be made of stone not to feel Lucas’ outrage at the injustice being perpetrated, where well-meaning concern for a child’s safety rapidly turns into a witch hunt, and the more he tries to make sense of it the more his life falls apart. Mikkelsen’s Lucas is a proud man and justifiably angry. It’s a great performance.

The suspense and emotional impact of the film pinned me in my seat. I hope The Hunt gets a local release because more people need to see it.

Incidentally, I ran into a few people who were at Fat Kid Rules The World last night and they reported a fun, charming time at the movies. Tonight the AFF wraps up with Mikkelsen in another Danish movie, the fine A Royal Affair. I aim to see Rust & Bone, and if I didn’t have to work on Friday morning I’d be at the midnight screening of The ABCs of Death.