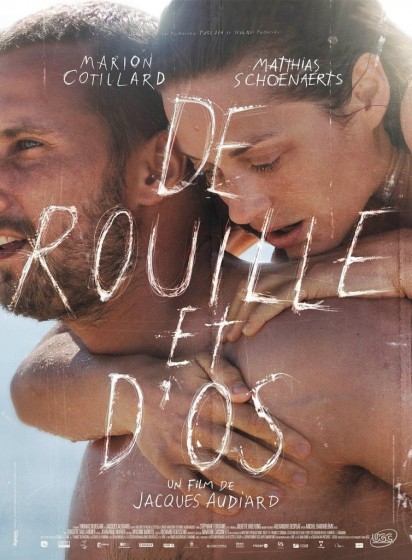 A week flies by when you’re at the movies every night. And though there were plenty of films I would have liked to have seen, I’m very happy with what I managed to take in this year. Highlights for me included Sarah Polley’s startlingly intimate Stories We Tell, Michael Haneke’s Love (Amour) and Thomas Vinterberg’s The Hunt, as well as local features Blackbird and The Disappeared. Feel free to scroll back through my week of posts for more more detailed thoughts on these films and others.

I want to say thanks again to the staff and volunteers at the AFF for their hard work, and to the programmers for choosing a selection of such interesting films. And congratulations to the winners of the AFF awards handed out yesterday evening, especially Blackbird‘s Marc Almon and Jason Buxton, When We Sleep‘s Ashley McKenzie,  the gifted cinematographer Jeff Wheaton, and my friend Wanda Nolan, who won development financing for her script The Magic of Boxer Connor. For a full list of AFF award winners, click here.

I want to say, also, how much I enjoy watching movies with a festival audience. With the odd exception of people forgetting to switch off their phones, the crowds have been super-considerate and interested in the films. I like it when I meet people in passing who want to discuss the movies, and I like it when I catch up with filmmakers who have found time in their schedules to see movies other than their own. At the AFF they can do that. I’m sure they love it. 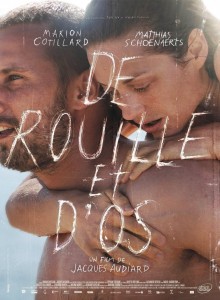 The last film I saw was Rust & Bone. The buzz around this picture has been loud, and the line-up for Park Lane’s Cinema 8 snaked around the lobby.

Rust & Bone is from writer-director Jacques Audiard (A Prophet), and is a serious examination of how two people’s identities are defined by their physicality. It’s not really a romance, not the way I thought it would be. In fact, the love story, such as it is, isn’t particularly compelling. But it’s very much worth seeing as a character study, and for the astonishing work of Academy Award-winning Marion Cotillard.

She’s Stéphanie, who works with Orcas at a marine park in the south of France, until an accident ends all that. Some time before, she met a bouncer at a local club, Ali (Matthias Schoenaerts), a guy who lives something of an itinerant lifestyle with his young son, Sam (Armand Verdure). They stay with Ali’s sister while Ali starts to get into unlicensed mixed martial arts to supplement his bouncer/security gigs.

Why she calls him after her accident is a bit of a mystery. What happened to her boyfriend? What was it about Ali that interested her? Some of the withholding of detail here is OK, and some of it frustrated me.

I very much believed Schoenaerts as Ali. He’s a bit of a pit bull, all reactions and single-mindedness, muscles and aggression, with a simple, selfish code. He certainly cares for his son, but he doesn’t have much patience in the role of father. For Stéphanie, her looks and work with the whales was a gift she took for granted, and she is plausibly shattered when she loses her legs.

The film’s most profound work is provided by Cotillard, and how her face reflects the changes she goes through, redefining her strengths. I think that’s the best part of what Rust & Bone does, how we observe a character dealing with a sudden disability. When she eventually becomes Ali’s fight manager—and sometime lover—you get to see how her working with “beasts” is a transferrable skill. Her arc is fascinating, and I should add that full marks go to the CGI FX people. She quite convincingly is missing her lower limbs.

I didn’t love Ali. Not to say the performance isn’t strong, but as a character I found him to be abrasive and unlikeable. Most of time he’s just a meathead, ignorant and thoughtless. And while I sort of understood why his simplicity and occasional, casual kindness appealed to Stéphanie, and he definitely softens towards the end, I found myself reacting to him in a really negative way, which compromised my appreciation of the film.

Like I said, I believed him. I just didn’t particularly empathize with him.