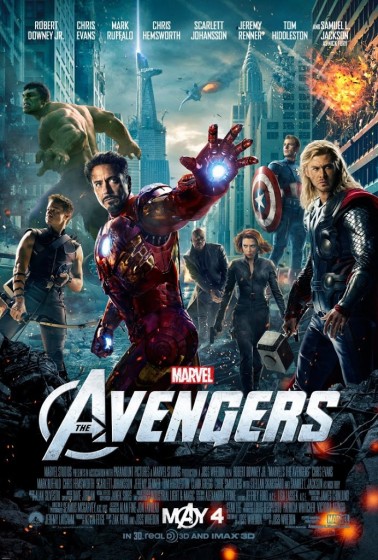 I’m at a bit of a loss to describe the scale of this thing, this Avengers movie. It’s been in the works for some time, going back to Iron Man and Hulk in 2008. With the success of those films, Marvel Studios—now a subsidiary of that gigamega-entertainer Disney—mapped out an interlocking series of pictures starring their stable of superhero characters.

Though Iron Man himself was something of a b-rated hero in terms of his mainstream visibility, his movie was a blast, helped enormously by a clever script, dynamite effects and the ace-in-the-hole casting: Robert Downey Jr as an unlikely, very funny, very flawed hero.

There was a (somewhat lesser) Iron Man sequel, then movies about Thor (Chris Hemsworth), the Norse God of Thunder, and WWII super-soldier Captain America (Chris Evans). All did well, setting the stage for this culmination, this teaming up of these super-powered folks, including a couple highly skilled agents of SHIELD, international spies—Black Widow/Natasha Romanov (Scarlett Johansson) and Hawkeye/Clint Barton (Jeremy Renner)—and its grande fromage, Nick Fury (Samuel L. Jackson).

What makes this bubbly brew of tights and muscles even more exciting is that its meister is Joss Whedon, the king of fantasy in pop culture, a guy who had a hand in everything from Buffy The Vampire Slayer, Alien: Resurrection, Toy Story to a great run of X-Men comics.

And you know what? Having spent $220 million dollars to bring it to us, the spectacle actually works. It’s one phenomenal—and enormous—superhero movie.

It does start a bit on the rocky side. We’re up in deep, dark space somewhere: Thor’s troubled bro Loki (Tom Hiddleston) is plotting evilly with craggy aliens. If you saw Thor you know the poor guy really got the shitty end of the stick growing up with that hammer-wielding, attention-hog brother of his, with his parents keeping the secret of his blue, frosty origins to themselves. But since then he’s fallen off the rainbow bridge and ended up a whole lot more singleminded than he was.

His plan: raid one of SHIELD’s bases, steal a cube of magic whatsis called The Tesseract—very Cosmic Cube-esque, for you Fantastic Four comic fans—that can open up a space gate and allow the alien beasties to come to earth and burn us to a cinder. Or some such. Sure, every superhero movie needs a maniacal villain with world-conquering plans and this will do, though I can’t say it makes a whole lot of sense. (How, exactly, did Loki hook up with these aliens, anyway? )

Fortunately, Loki is both charming and nutty, so his plans don’t have to bother with logic. Hiddleston really seems to be having fun this time out and steals a slew of the scenes he’s in. While I missed some of his more sympathetic character traits from Thor, one can enjoy how he’s become an amok deity rock star, with his Bono-circa-Joshua Tree locks and General Zod attitude. He succeeds in grabbing the cube and brainwashing Selvig (Stellan Skarsgaard), the Nordic scientist hold-over from Thor, and Hawkeye, to do his bidding for the first half of the movie.

This imminent threat to earth means Fury has to go talk to his superiors, a cabinet of poorly lit World Security talking heads speaking down at him from screens on his office wall. Among their number are genre veterans Powers Boothe (Sin City) and Jenny Agutter (Logan’s Run), so you know they’re important. Fury wants to activate these superheroes, they’re against the idea. You get the feeling that, before long, someone’s going to fly and someone else is getting punched.

And, believe it or not, SHIELD has a Helicarrier. While super-cool in the comics, this massively impractical airship actually has jet fighters parked on its surface. They never really explain how the planes land and take off while it’s at 30,000 feet.

I know. None of this matters. What you want to know is, does The Avengers deliver on the promise of those earlier movies? Does Nick Fury finally get to kick some ass? Do Thor and Iron Man and Captain America fight each other? Yes, on all accounts.

The movie really kicks into gear when the mismatched heroes are all gathered together in one room. One of Whedon’s gifts is a deftness with a one-liner, and The Avengers is stuffed full of laughs. As much as the action sequences rock, it’s the enormous egos bumping up against each other provide the best moments in the film. Their natural suspicion of each other, and especially of SHIELD, is gold. I want to see it again just so I can listen for the lines I missed because I was laughing at the ones directly preceding.

Whedon is also a real democrat in paring out chunks of the screen. Each member of the team, as well as supporting cast such as Agent Coulson (Clark Gregg), gets plenty of time to shine.

The biggest surprise is the casting of indie stalwart Mark Ruffalo as Bruce Banner AKA The Hulk. Once you see it, it makes all kinds of sense—Ruffalo has a certain brooding method menace to him, but I didn’t expect what a thrill it was to see Ruffalo underplay so successfully and the Hulk, of course, gets eventually unleashed. In the years since the Edward Norton Hulk movie, they’ve done a good job cleaning up the CGI. The computer-generated monster really works here: He has weight, and in a few scenes, is genuinely frightening.

The finale in New York City, teased at in the trailer, is the single most impressive superhero battle sequence I’ve ever seen in the movies. Unlike much of the massive battle scenes in the Transformers movies that manage a similar scale but at about half the coherency, you always know where you are in the action in this movie. If you know New York, you might even recognize a few of the buildings getting trashed. Park Avenue South, the former home of the Marvel Comics offices, comes out particularly poorly.

I am still left with a few questions. For instance, how long has Thor been back on earth? At the end of his movie, you get the sense he might be stuck in Asgard for awhile. But in conversations with Loki here, it sounds as though he might have been back and adopted our blue marble, taking on the role of protector.

However, this is a brilliant popcorn movie and a great commencement of the summer season. (It even has a cameo by legendary character Harry Dean Stanton. How cool is that?)

I read this week that Ruffalo has signed onto a six-picture deal. That’s a lot more Hulk, a lot more Avengers, to come. It’s Marvel’s world now. Bring on the giant green rage monster!