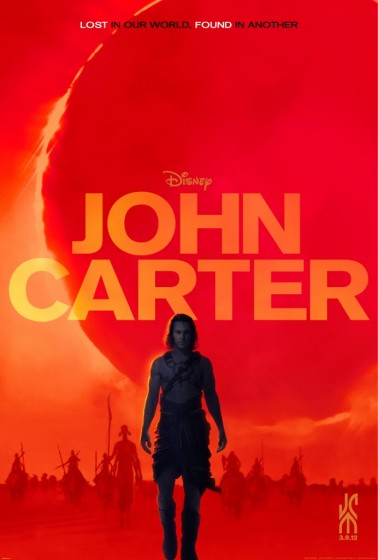 Directed by Andrew Stanton
Written by Stanton, Mark Andrews and Michael Chabon, based
on the Edgar Rice Burroughs book, A Princess of Mars

In a TED Talk, director Andrew Stanton said that the biggest thing a story needs to do is “make you care.” I really wanted to care about John Carter. At times I did. And other times it just didn’t connect.

The story is about a Civil War veteran, the titular John Carter (Taylor Kitsch), who becomes a hunter of gold leading him through science fiction means to the planet Mars. But this isn’t the Mars we know with the carbon dioxide atmosphere and the average -55 degrees Celsius temperatures. It’s one author Burroughs imagined, a desert planet with great chasms, fresh water and warring, alien communities. Carter immediately discovers that in the lower gravity, he’s able to jump great distances. And he’s apparently almost invulnerable to harm when he makes those jumps, because he always lands unhurt. But, best to take a lot on faith here, after all. (Please see Mars with breathable atmosphere, indigenous peoples, etc.)

The locals call their planet Barsoom. There are human-like groups, notably the red-tattooed denizens of Helium and their enemies, the Zodanga, who live in a walking city. (Not sure why it walks or where it’s walking to.) The prince of Zodanga is Sab Than (Dominic West), who has a crazy blue energy weapon given to him by mythical-but-quite-real Therns, who like to stir up the shit on Barsoom. With this weapon Sab Than is crushing all his foes, and Helium is in big trouble. The princess there, Dejah (Lynn Collins), is a capable sort, a scientist, and resistant to the idea of marrying Sab Than in order to spare her city. It takes a little while for Carter to meet her, the presumptuous romantic interest, as he’s first captured by the aggressive, four-armed green alien Tharks and picks up a toady, dog-like creature Woola, who, along with being remarkably quick, is very loyal.

There’s a lot of plot to wade through here, and this is where John Carter goes wrong. George Lucas was a fan of the original Burroughs books and used them as inspiration for the original Star Wars. He was able to tell his sprawling story in such a way as to provide amazing moments for all the characters as well as give the audience a clear understanding of what was at stake in the larger universe. Unfortunately, John Carter is much more reminiscent of the Star Wars prequels, with too much widescreen CGI spectacle and not enough intimate character work.

On second thought, that might be a touch too damning. I liked John Carter a lot more than the first two prequels, at least. There’s a lot of great visual ideas and moments where I was carried away by all the stuff that’s going on. I really liked the framing device in the film, for example, and the action sequences do deliver.

But it could use just a bit more camp and zazz. This material is contemporary to Burroughs’ Tarzan, to Conan and Flash Gordon. The film could have been like the 1980s adaptation of Flash Gordon with 20 times the budget. But no, because while epic, it’s not quite as much fun.

And to belabour the Star Wars comparison, Carter himself could be a bit more Han Solo and a bit less Luke Skywalker. That is, less sulky. Not to say Kitsch isn’t a solid physical presence with the brooding good looks and what-have-you, and he has a decent character arc, but he simply isn’t very memorable. In the end you might think he’s cool, but are you excited by the possibility of a sequel following his further adventures? Unlikely.

Maybe his best moment is when wading into another nasty, homicidal tribe of Barsoom, we cut from the intense battle to his memories of finding his wife and daughter dead, burying them, like a scene out of The Outlaw Josey Wales. That was perhaps the most moving moment of the film, but it’s fleeting.

So, either not moving enough or not fun enough, right? All this out there, I’m going to wrap up by telling you that John Carter is actually better than most of the critics are saying. For some, fans of grand fantasy, it might be even better than the previous few paragraphs are saying. Certainly better than the bad buzz that preceded the film. I think it deserves at least a passing grade on Rotten Tomatoes, which, at this writing, it doesn’t have. For all its faults, you can tell it is a passion project for Stanton, with a lot of energy. I’m glad to have seen it, and I think it deserves a chance to find an audience.

It just didn’t make me care quite like I think it should have, Mr Stanton.