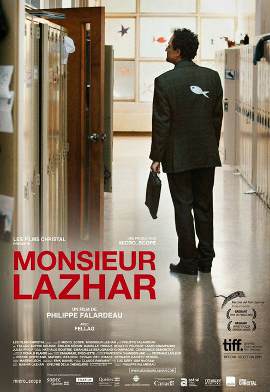 It’s a Thursday night in March, and I was watching the Genies earlier this evening. For those of you reading this from outside Canada—hell, for a lot of Canadians, too—let me tell you what that is: It’s the award show for Canadian film.

This year was the 32nd edition of the show. The televised portion runs for an hour and besides the awards it still manages to fit in three musical performances and some interpretive ice dancing. That’s one thing it’s got over the Oscars, concision. What’s amazing is how little anyone cares about these awards in Canada. I work in this industry and I barely care about them. Maybe it’s because we lack a star system or any kind of glamour in the film industry, something we need in order to feel connected to these kinds of events. Maybe it’s because, despite the best efforts of Telefilm Canada, so few Canadian movies get shown in cinemas in a country where Hollywood has the distribution system in a vice grip, and for most Canadian audiences that’s just fine. They vote with their entertainment dollar for Hollywood every year more than 95 percent of the time. It’s sadly indicative that Andrea Martin, who was to have hosted the show with George Stroumboulopoulos, pulled out at the last minute due to a scheduling conflict with a something she’s working on in LA.

In the Globe & Mail today, Canadian director Patricia Rozema and other industry heavyweights offered their two cents on what the Canadian film industry needs right now, with suggestions that should be familiar to anyone who knows about the business: money, courage, exhibition quotas, changing tax laws, eyeballs, and so on. Cameron Bailey is onto something when he said we should follow the inspiration of Quebec cinema. Justifiably, Monsieur Lazhar, Café de Flore and Starbuck won multiple awards tonight at the Genies, and congratulations to all of the filmmakers. I’m fortunate enough to have seen all three of these films, even though only one, Monsieur Lazhar, got screened at the local multiplex. And that’s because it was nominated for a Best Foreign Language Academy Award, not because it was up for a few Genies. Anyway, I don’t want to bash the Canadian movie biz, nor the awards show that does its best to promote an industry that struggles to be recognized by a largely indifferent public. What I find curious, and want to get into, is how Monsieur Lazhar has won over the critical consensus as the Canadian film of the year, sealed with its Genie wins for Best Picture and Best Director tonight. I’m not entirely on board.

Don’t get me wrong, it’s a fine film. Philippe Falardeau’s story of a Algerian refugee who finds work in a Montreal elementary school is well-told and affecting, illuminating both the challenges of working in the Canadian public school system as well as the immigrant experience in this country. Most of all, it’s about loss, and what we do, adults and children, to deal with it. I liked the unfussy script and direction and, in the lead, Mohamed Fellag was totally compelling.

But, in the end, it didn’t have me leaving the cinema asking questions or thinking much about what I’d seen. In its grit and straightforwardness, if I compared the two films—which is a bit of apples and oranges, I grant you, but that’s what happens at award shows like the Genies, and it’s what us film bloggers do once in awhile, so there you go—I preferred the sheer cinematic verve of Café de Flore.

Ambition isn’t everything, mind you. If you’ve seen my list of the best movies of 2011, you know Café de Flore sits at its top, over films that have an even wider scope, like The Tree of Life. What I liked about Jean-Marc Vallée’s film is that I felt his reach didn’t exceed his grasp. I’m still thinking about his film now, still mulling it over, looking forward to when I can see it for a third time. Its images, sensuality, humanity, all these things grabbed me. When last I saw it, it polarized the audience I was in: One person said they hated the lead character and that spoiled a lot of it for him. Someone else said they felt the filmmaker had written a story that forgave its male character any responsibility for his role in his relationship with the female leads. I didn’t agree with either of them, but I loved that they were as passionate as I was about their take on what the film was saying. I guess that explains why it wasn’t embraced by the criteratti as was Monsieur Lazhar. That’s a more respectable, a little less inflammatory film to get behind. For me, Café de Flore does what great art should do: it challenges. It gets under your skin.

For the record, I’ll just say I’m proud to live in a country that can produce a film as amazing as Café de Flore. And I’ll leave it there.