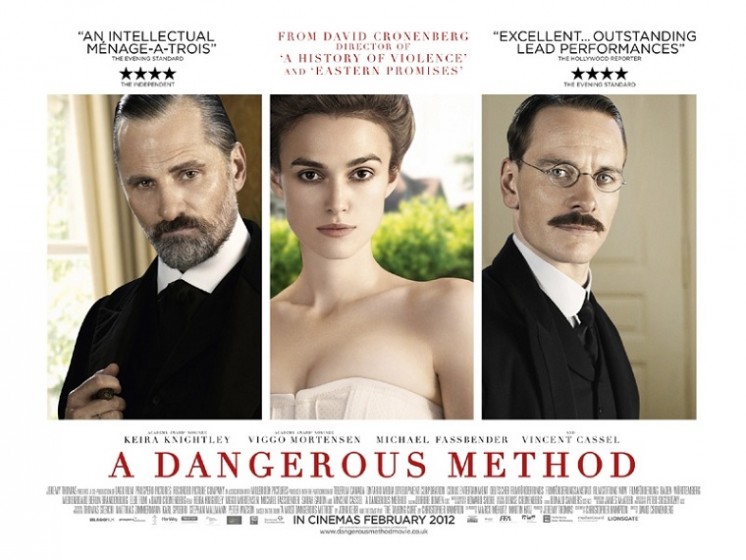 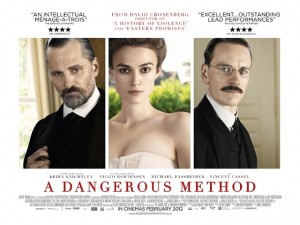 Directed by David Cronenberg
Written by Christopher Hampton, from his play A Talking Cure, which was adapted from the book A Most Dangerous Method by John Kerr.

I have really been enjoying the Viggo Mortensen era of David Cronenberg’s work. Mortensen has starred in the past three movies Cronenberg has made, A History of Violence, Eastern Promises and now A Dangerous Method.

This time Mortensen takes a supporting role. He’s Sigmund Freud, the renowned father of psychoanalysis and father-figure to Carl Jung, played by Michael Fassbender. (Could they have chosen two more wiry, hollow-cheeked actors to share the screen?) Though the film is ostensibly about Jung and his relationship with Sabina Spielrein (Keira Knightley), one of his patients, I don’t think I’m out of line to suggest the key relationship is between the two bewhiskered men. It’s a love affair of a kind, their first conversation upon meeting lasting 13 hours. That seems unusual.

The story starts with Jung taking Spielrein into his care. She’s a “hysteric,” institutionalized by her father. Jung attempts his talking cure, the theory that she can use her intellect to talk her way to health. It really seems to work with her, and she starts to believe that she, too, could become a psychoanalyst.

The physical attraction between the two is strong, though Jung enters into a sexual relationship with Spielrein only after another patient, Otto Gross (Vincent Cassel), encourages him to divest himself of his repressed desires, even though Jung is so devoted to his wife, Emma (Sarah Gadon), if not entirely interested in the sacrifices of fatherhood.

We don’t get much sense of the societal impact their work was having, but there must have been much discussion and resistance, even in the academic circles of early century Vienna and Zurich, people who were appalled by Freud and Jung’s ideas. No, the story told here is in a beautiful bubble of well-appointed rooms, the sunny Swiss countryside and in boats, floating on calm lakes. Lots of water in the film, representing how we skate on our subconscious, hiding the darkness below? On the surface, Jung and Spielrein get entangled, then Jung and Freud’s relationship is tested by Jung’s professional transgression, as well as by their philosophical differences.

What’s fascinating about the film and relationships is that with so much said, so much explored in the psyches of the characters, right down to dream analysis, it’s what remains unsaid that is so compelling. As Jung, Fassbender is incredibly restrained, driven by his intellectual curiosity, and even when he does finally give in to emotion, it seems a bit rehearsed. Mortensen is typically powerful in the smaller role, though his Freud is a victim of his own prejudices, the perceived differences between himself as a Jew and Jung an Aryan, not to mention his class-conscious concerns: Jung is well-off as a result of his wife’s money, whereas Freud has six children and speaks of the struggle to accomplish his work while tending to a large family. The split that comes between these great thinkers is as inevitable and sad as the one that has Spielrein and Jung together, separate, together again and then finally apart.

I very much enjoyed A Dangerous Method for its intellectual rigour, even when it seemed so austere, especially by comparison with Cronenberg’s other work. The physicality in his last two films, both in scenes of violence and sex, a theme of visceral intensity that goes back to his body-conscious early films, brains exploding in Scanners or videotape guts in Videodrome. So little of that is evident here. I think I missed it. With scenes of Spielrein is coming to terms with her enjoyment of a rougher kind of sex, I thought the film would be a little more shocking and transgressive as a result.

But lots of credit needs to go to Keira Knightley. I’ve read a few reviews that say she goes a bit OTT in the film, but I don’t agree at all. Her physicality in the role is startling, especially when compared to Fassbender and Mortensen’s reserve, but it seems perfectly suited to the part. The arc of her character is so important, and in her, at least, we see the most vital thread to Cronenberg’s oeuvre.

(In case you were wondering, would this 2011 film have troubled my Best of list? It may have unseated one of the runners-up to the Top 10.)