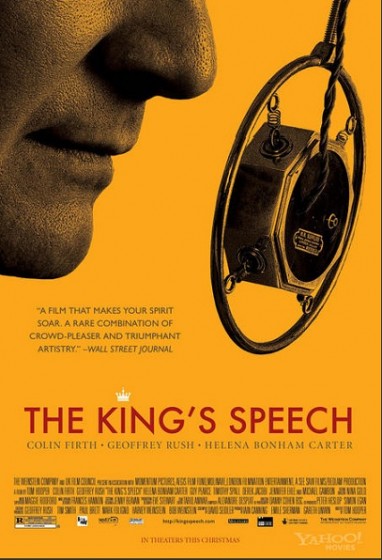 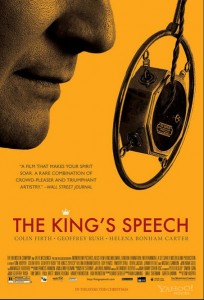 Well, isn’t this a good time at the movies. It’s been rare enough this year to have a good story well told, but when the beats hit the mark so flawlessly, well, I’m prone to hyperbole, I have to admit.

Shockingly, The King’s Speech is a biopic I really liked. There are so few of them, but this one tricked me by being, at its core, a relationship movie, undercutting the elements of predictability, especially for those who know the history. That it happened to be the telling of actual events becomes more important later in the running, but only after the key emotional connections have been made.

Colin Firth stars as Albert, “Bertie,” The Duke of York, the father of Queen Elizabeth II, who in 1936 became King of England when his brother David, known as King Edward VIII, abdicated to be with Wallace Simpson, a divorcee the Church of England wouldn’t endorse as queen.

That’s the broader historical context, but the human drama contained therein has to do with Bertie’s speech impediment, a stammer he’s had since childhood. For help, with the encouragement of his wife Elizabeth (Helena Bonham Carter)—who we’ve known more recently as the Queen Mum—Bertie finds a therapist by the name of Lionel Logue (Geoffery Rush). The Australian Logue’s treatment is a bit unorthodox for the late 30s, incorporating more than a little psychoanalysis amongst his more mechanical tongue-twisting exercises. And the chasm of class has to be crossed. Things don’t go well at first.

Hooper and cinematographer Danny Cohen smartly set much of the first act with closeups, stalking camera moves and lenses providing a bit of a fish-eye, setting the stage for Bertie’s feelings of claustrophobia and insecurity. Both the interiors and exteriors have a cold, diffuse light to them, offset by perfect set design and odd framing, artful but not distracting. Even more smart is how as the story progresses, the filmmakers let the performers faces carry more of the guts of the thing, where directorial flourishes back off to allow for a collection of great performances, further supported by swirling classical soundtrack.

Firth is ideally cast as a man with a core of strength but hobbled by his fear and a life living in the shadow of others, his father and brother. You do feel the pressure he’s under. Bonham Carter adds her typical grace to her part, while Rush has just the right amount of flint and confidence in his technique to appear eccentric, but not radical. That his character aspires to Shakespeare but can’t quite manage it humanizes him even more, as do a few key scenes with his family. His wife Myrtle, played by Jennifer Ehle with her uncanny young-Streep looks, is lovely and has a great reactive scene in the third act. The supporting cast is excellent, especially Guy Pearce as the shallow, distracted David. The only slight disappointment is Timothy Spall as Churchill, who seems to be impersonating more than inhabiting.

The joy in the piece comes from Bertie’s progress, triggering a few hilarious moments as he practices strong language, delivered with considerable volume. Also, Rush delivers an ideal line at an ideal time: “Knighthood?” Its relevance and perfection will be made clear when you see the film.

While fans of the monarchy will find plenty to enjoy here—I’d compare The King’s Speech favourably to Stephen Frears’ The Queen in its verisimilitude—there are plenty of other rich subtexts. I especially liked how broadcast changed the world as depicted here. Radio and newsreels required more of public figures from the 1920s than in the past—Michael Gambon as King George V points out that once upon a time a regent needed only look good in a uniform and not fall off his horse. It may be quaint viewed from where we stand, but its fascinating considering how the the cult of personality prevails today, in politics and celebrity.

The only serious mark against The King’s Speech that I can raise is that it’s living, breathing, be-crowned Oscar bait. It has everything the Academy adores: history, repression, a character overcoming physical handicap and class struggle. It has actors that will be showered with award nominations in the very near future. That’s really not the film’s fault, but I imagine the hype that’s already surrounding the thing is liable to grow in the weeks to come, which could be stifling.

The fact of it is, this picture works so well because inside the context and the big events, it’s an intimate story of friendship between two men. It’s not stuffy, self-conscious or broad, it’s delicate and well-observed. And classy, yes.