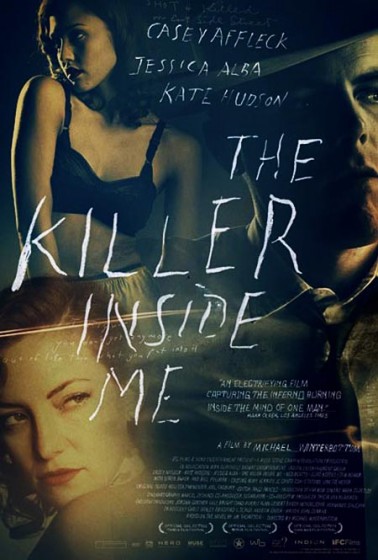 Coming out of Sundance this year, The Killer Inside Me caused quite a commotion. An audience member called out director Michael Winterbottom, calling the film “just horrible” for its depiction of brutal violence, especially towards the two lead female characters in the picture.

Director Winterbottom is one of the most versatile and interesting filmmakers working today. He frequently takes big risks with his projects. I’ve enjoyed many of his films—Code 46 and A Mighty Heart are my favourites. He also directed 9 Songs for which he had his leads, professional actors, have sex in front of the camera. He doesn’t shy away from a little controversy.

The Killer Inside Me is adapted from a Jim Thompson novel published in 1952, a gritty Texan noir, scripted by John Curran, who directed The Painted Veil and will soon have out the Edward Norton/Robert DeNiro/Milla Jovovich drama Stone. Thompson’s work has been made into films before, in The Grifters, After Dark, My Sweet and The Getaway, and even an earlier version of The Killer Inside Me starring Stacey Keach. He writes crime dramas about desperate, sweaty people willing to do anything for terrible love.

Here Casey Affleck plays Lou Ford, an amiable, well-mannered deputy in a small West Texas town. He narrates the tale so we get to know him. He has a girlfriend Amy (Kate Hudson) as well as a girl on the side, Joyce (Jessica Alba), a prostitute who lives on the edge of town. He hatches a plan to get revenge on a local tycoon by murdering the tycoon’s son and Joyce, making it look like they’re killed each other. A host of local characters are on his trail, including Elias Koteas’ union man and Simon Baker’s investigator. Lou spends most of the movie trying to cover up his crime, all the while we’re on his pocket. Lou isn’t mean-spirited or unkind, though he does enjoy rough sex, and we see in flashback a few moments of Freudian weirdness that we are to assume messed him up. He’s really just bad at the core. There’s no excuse for him or his behavior. He kills people, even those he loves, and sometimes even feels a bit of regret about it. But he continues to do it.

It’s not the mundane nature of evil that shocks here. I’m sure when the book was released, spending time with someone like Lou was a jolt to a reader. But these days, there are plenty of murder narratives for anyone looking to climb into that psychology, both fictional and the true crime sort.
This isn’t a far cry from Henry: Portrait of a Serial Killer, to name but one.

What shocks is the time spent with the violence. We see and hear Lou’s assaults with gruesome detail.  It’s startling in a way a 100 action movies can’t replicate. To make matters worse, the female characters on the receiving end of this treatment, their affection for Lou doesn’t seem to waver. That’s what’s so hard to take, and that’s probably what’s offending people the most, the women seem to welcome the brutal behavior. And by having Lou tell the story, we’re forced to participate. It is uncomfortably close to exploitation.

I read that Winterbottom stayed as true to the novel as he could, lifting chunks of dialogue right off it.  This is hard boiled storytelling, nothing is softened. Me, I can respect his efforts to be true to the world Thompson created. The women from Thompson’s novels are caricatures as much as Lou is. The paroxysm of flame that envelopes everything at the end, it didn’t feel real to me… it felt like opera. That’s how I understood it.

But even opera and exaggeration doesn’t exist in a vacuum. The world The Coen Brothers created in Blood Simple isn’t a far cry from this one. The commonality of the murder is the same, the choice of depiction is different… we saw less of the violence, and certainly not towards women. Realistic violence in a story without a moral centre is very hard to watch, and I certainly understand those who think this is irredeemably ugly. But it’s just too damn well-made for me to dismiss it out of hand. It chilled me and made me cringe, but I stayed with it.