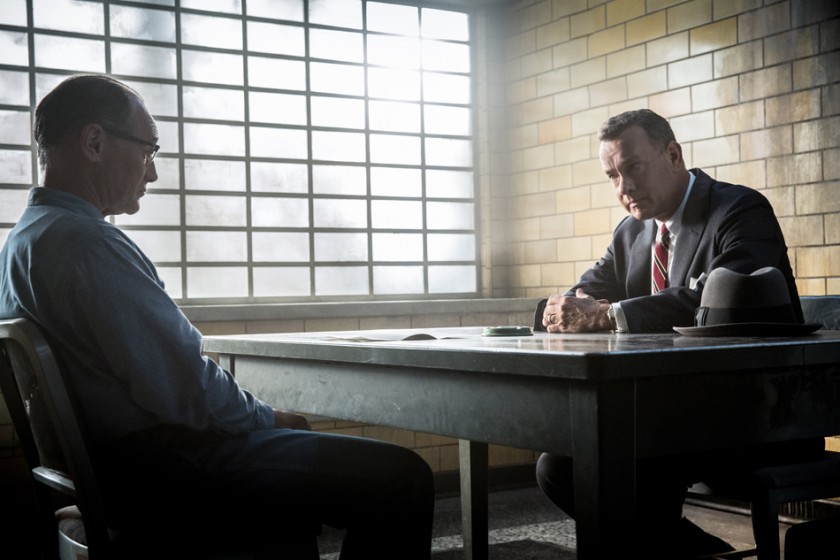 Yes, Bridge Of Spies is set in the late 1950s and early ’60s, based on a true story, and yes, it’s set in the intelligence community of the United States, the Soviet Union, and East Germany. But this is not really a spy thriller, more a morality tale. And for swaths of its running time it’s absent the suspense a self-respecting spy movie requires to earn its genre stripes. 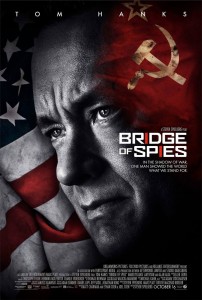 There’s no denying its prestige credentials, however: Spielberg’s picture starts as a New York 1950s courtroom drama, far away from the icy front lines of the cold war. G-Men arrest suspected Russian spy Rudolf Abel (Mark Rylance, sensational in his ease). Insurance lawyer James B. Donovan (Tom Hanks, staunch) is asked to defend him, and he and Abel become friendly while Donovan’s family (including wife Amy Ryan and daughter Eve Hewson) have their lives threatened by random Commie-hatin’ folks.

Does having his home pierced by bullets discourage Donovan at all? He’s too much the old-fashioned Jimmy Stewart hero to entertain the possibility of deviating from his mission. In fact, everything about this feels either vintage or superannuated, from Alan Alda to Janusz Kaminski’s soft, glowy lighting to the staginess of so many wood-lined interiors. 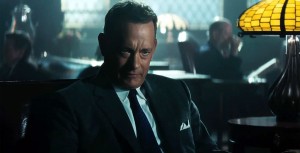 Meanwhile, Gary Powers (Austin Stowell), an American spy plane pilot, is shot down by the Soviets. Donovan is sent to Germany to negotiate the handover of Abel for Powers, triggering the second half of the film—Donovan comes into his own on a semi-comic intelligence operation. It’s a big improvement over the somewhat tedious first half,  with the arrival of characters like Sebastian Koch’s Vogel and his sexy Volvo. It feels more in line with the work of the Coen Brothers, who play script massagers here.

Spielberg has said he’s a fan of classic espionage movies—there’s evidence of that interest in his recreation of the end of The Spy Who Came In From The Cold from the window of a passing U-Bahn. But Bridge of Spies wouldn’t have been fashionable even 50 years ago when Martin Ritt’s film was released, with its white-hatted American everyman hero beating the enemy spymasters at their own game. It might be cynical to say so, but the story of a heroic lawyer fighting for the rights of an enemy combatant in the era of Guantanamo doesn’t seem terribly relevant. And Spielberg still hasn’t outgrown the sentiment of swelling strings telling us how to feel.

Given the top-notch talent at hand, and Spielberg’s experience in this milieu having made the electrifying Munich a decade ago, Bridge Of Spies is a passable drama but disappointing spy movie.