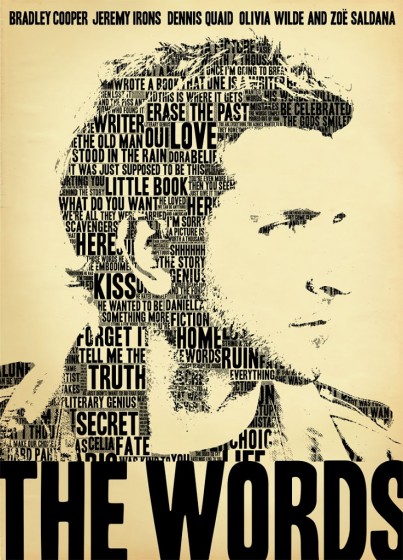 Written and Directed by Brian Klugman and Lee Sternthal

It’s not very often I get to see a movie that fails as spectacularly as this one. And not in the usual way, from laziness or the factory-tooled mediocrity of many Hollywood movies. This doesn’t fail by being safe. I’ll credit The Words for no lack of ambition, which makes it almost likeable, if at least not boring. I know that sounds like pretty faint praise, but I certainly appreciate a filmmaker who swings for the fences and strikes out than a dull, formula film that no one behind the camera really cared about. But it’s still a fiasco, a result of sheer badness in the script.

Then, the question is, how did it get made? I gather executive producer and star Bradley Cooper is old friends with the directors. He’s the reason. He’s a big star now, so he can shoulder the responsibility for this ill-advised work.

He plays Rory Jansen, a young writer struggling to get his first novel published while living the New York-chic-industrial-loft-life with his wife, Dora (Zoe Saldana). Getting a job in publishing, he helps sustain them while shopping his manuscript around, but gets no takers. Frustrated with the chasm between who he thinks he should be and the the hard reality of his limitations, he gets desperate. He finds an old manuscript in a satchel he purchases in Paris and shows it around as his follow-up story. He gets it published and his world changes. He’s the toast of the New York literary scene. But there’s an unnamed Old Man (Jeremy Irons, unconvincingly feeble in bad make-up) shadowing the lovely couple. Could he be the original author of the book…?

So far, so good. This set-up is clumsy but pregnant with possibility, and the cast and the literary thriller milieu is pretty compelling. But from there everything goes wrong.

I neglected to mention there’s a framing device. Famed author Clay Hammond (Dennis Quaid) is giving reading of an excerpt from his book, The Words, in which exists the story of Rory and Dora and the Old Man. So, a story within a story. There are many positive things about Quaid’s screen presence, but the kind of intellectual heaviness the character requires eludes him. I don’t buy him as a novelist, and his voice-over is intrusive. Hammond is being hit on by an attractive grad student, Daniella (Olivia Wilde), which is fine, though the point of this entire segment escapes me. It’s an irritating distraction from the main story. And it isn’t the only parallel thread going on here.

When Rory and the Old Man do finally connect, we get the tale that inspired the stolen novel. It’s a sad love story set mostly in post-war Paris, and in it we get some of the best acting in the film (from Ben Barnes and Nora Amezeder), but in a dewy, sepia-toned, sub-Nicholas Sparks melodrama of a young couple who lose their baby, leading to the frenzied birth of a novel—as these movies often portray, a great book simply requires bottomless grief, alcohol and two-weeks of sleeplessness.

The film could have taken us somewhere else, to a place, say, where we get to examine Rory and Dora’s relationship through the prism of his lies, or even to a more thriller-esque deal where maybe The Old Man wants to blackmail Rory for money or revenge or something. That might have worked, and we’d better understand Rory. Then he might have been forced to make a hard decision to protect his house of cards and we’re into the “What would we have done in his circumstances?” sitch. But no, none of that.

The running time is fluffed out with this soft-focus backstory, relentless cliches about writers—including, ironically, some particularly poor dialogue—an annoying score and a singular lack of forward momentum. This is a movie about writing where it seems like the screenwriters don’t know anything about that key subject. Not a far reach, given how bad their movie is.

Finally, we get an ambiguous ending that tells us very little about what went on before, nor does it provide any satisfaction. “Bullshit,” one character calls on another. Audiences will be saying the same thing, I’d wager.