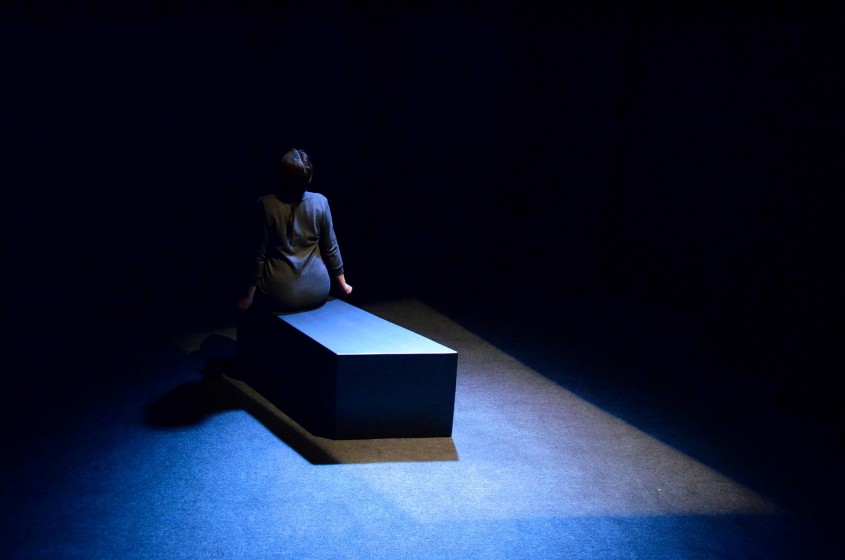 Directed by Emmy Alcorn, Glory is inspired by the true story of Moncton’s Ashley Smith. Since the age of fifteen, she was shuffled between numerous detention centres and prison facilities across Canada.  At 18 years old, Smith committed suicide after countless days in solitary confinement —  just three days after requesting transfer to a psychiatric facility.  Instead she was put on suicide watch, and four guards witnessed her death via surveillance cameras in 2007.  With mesmerizing yet harrowing light and sound design by Ingrid Risk and Steven Naylor, Mulgrave’s production streamlines a rapid and riotous story.

Stephanie MacDonald gives a demanding performance as three women: Gail, a Corrections Officer at Grand Valley Women’s Institution; Glory, a slightly-fictionalized Smith; and Glory’s mother Rosellen.  Normally I’m weary of one-person shows but it’s a significant choice in a play that explores the degrading nature of isolation and MacDonald certainly makes it work.  Forgive the sweeping statement but — MacDonald is the best actor in the city.  I feel silly to even try to describe her plural performances.  Her distinction between characters is subtle artistry, perfectly crafted and sincere.  She is so easy to watch and nothing short of stunning.  It’s not just the precision between roles that is captivating, but how honestly and instantly MacDonald apparates from one woman’s deep emotional state to the next.  I occasionally needed a moment longer between transformations to keep up with the emotional momentum, and wished for a bit more silence and space between characters.

Watching Glory Die tells an important story.  Not only because it’s an actual news item about a mistreated young girl, kept from any form of behavioral rehabilitation.  Not only because it highlights how lack of access to psychiatric treatment allows mental illness to engulf a person…but because there are still many on-going stories like Smith’s happening today, inside and out of the prison system.

Our country and in particular our Atlantic provinces often lump together youth with mental illnesses and those with behavioral issues, two very different things.  At Halifax’s IWK Hospital, you can find pre-teen boys with violent tendencies in rooms next door to teenage girls with anorexia, children in need of short-term crisis stabilization alongside long-term psychiatric cases.  Such mixed-bag facilities, plus controversial solitary confinement, are breeding grounds for mental unwellness in adults but especially in youth, whose brains haven’t even fully developed yet.

It’s an empowering feeling to leave the theatre craving change.  Unlike many Judith Thompson plays, Watching Glory Die doesn’t portray desolate characters for the sake of their drama.  It is politically charged and some of Thompson’s best story-telling (despite some clunky and reaching metaphors in the mother’s monologues, which at times sound more like a Thompson impression than authentic Thompson speech).  I left the show wanting to know how many more stories like Smith’s there are currently, and what if anything I can do to make change.  There have been 104 recommendations to put a limit on solitary confinement and the government has rejected all of them, choosing instead to pussy-foot around the definition of confinement and categorizing different “types” of segregation — which seems about as useful as a bunch of men deciding there are different “kinds” of rape.

Four years ago The UN has called for a limitation of 15 days for solitary confinement, warning that it causes “severe mental pain [that] can amount to torture or cruel, inhuman or degrading treatment … when used as a punishment, during pre-trial detention, indefinitely or for a prolonged period, for persons with mental disabilities or juveniles.”  It’s not enough just to have watched the play and been educated, I’m now wondering what the next step to evoking change is after awareness is raised?

Watching Glory Die is powerful theatre, delivered by one of the most masterful performers in the city.  Don’t miss the chance to witness MacDonald’s powerhouse portrayal of three hauntingly rousing women.