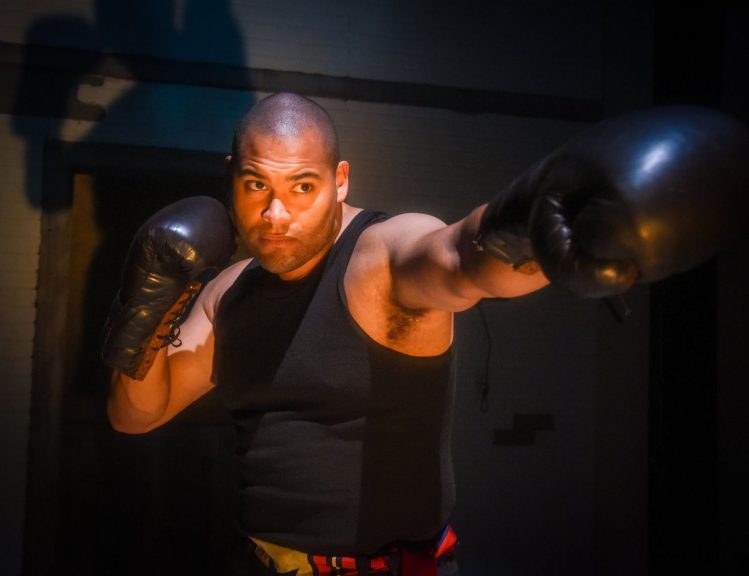 Chasing Champions “takes you on the journey of Sam Langford’s boxing career. It also uses flash back and a flexible timeline to explore the fighter’s life as a child growing up in Nova Scotia and what forged him into one of the greatest fighters who ever lived.”

Here’s five reasons why you need to get down to Neptune’s Scotiabank Stage April 30th at 2pm.

5. The Ensemble Work is Astonishing.
Sampson (who won two Theatre NS Merritts for his writing and performance), Marty Burt (who also won), Micha Cromwell (who was nominated), and Zach Faye (the lankiest boxer you ever did see) are an incredible team. They sell their various roles with attention to detail and effortless transitions between the multitude of people Sam Langford met travelling across the boxing gyms of the world. Cromwell is a particular stand out: as hilarious and spritely as Langford’s sparring partner John “Liver” Davis as she is powerful and heartbreaking as Langford’s wife Martha.

4. East Coast Story, Hold The Bag Pipes
Sam Langford was known as the Boston Terror to some, but us Scotians may prefer his “Weymouth Wizard” title. Langford is an extraordinary athlete hailing from Digby County, who traveled the world fighting all the best fighters, scoring more knockouts than George Foreman and Mike Tyson combined. As Sampson said on CBC radio last week, “Nova Scotia is rich with a lot of untold stories,” and it’s refreshing to see this one told. It’s time we combat the history books’ erasure of important stories from the BIPOC community in Atlantic Canada.

3. Biography On Stage
While the dramaturgical argument could be made that there are several plays inside Champions that could be told, Sampson has clearly and purposely chosen to write an entire life story. Sure, there are prominent aspects of Langford’s life that could be isolated and made into an enticing script themselves. But I love a good biography and Sampson handles the scope of an amazing history with grace, wisdom and skill.

2. Director Ron Jenkins and the Ship’s Design Team
Living in Halifax can feel theatrically isolating at times. Like, often. What a treat and privilege it is to see an exciting new script in the hands of mastermind Ron Jenkins, originally from Cape Breton but stationed more westward as a professional theatre artist. He is the king of spectacle, the theatre’s equivalent of a stick-and-move boxer: light on his feet as he moves the cast from location to location, character to character, time period to time period. Any aspiring, or steadily working, director in town needs to buy their ticket NOW and witness the work of such a prominent, meticulous artist.

ALSO, Garrett Barker and Corwin Ferguson designed a boxing ring!!! For the theatre!!! I love it!!! And with extremely well executed projections earning them a Merritt award for their vision. Leigh Ann Vardy won the Leigh Ann Vardy award — I mean lighting design award, for her work on Champions. Plus, Cathleen McCormack’s simple costume design and Joe Micallef’s intoxicating sound design make the expansive story a breeze to digest and follow along.

1. It’s Way Too Relevant.
The hardships Langford faced as a talented, determined black man at the turn of the century are all too translatable to our culture of systematic and environmental racism, President You-Know-Who, and the ever-problematic segregation issues of our city and province. Sampson’s exploration of Langford’s life celebrates the perseverance and fortitude the boxer faced, all the while teaching a history lesson of where today’s systematic racism stems from (maybe our chief of police should check the show out?) . We also meet a beautiful man, witness his growth, his relationships, his joy and victory. We see humanity’s worst and best over the course of two hours. And we leave the theatre as a community, moved. Please don’t miss this brilliant show.