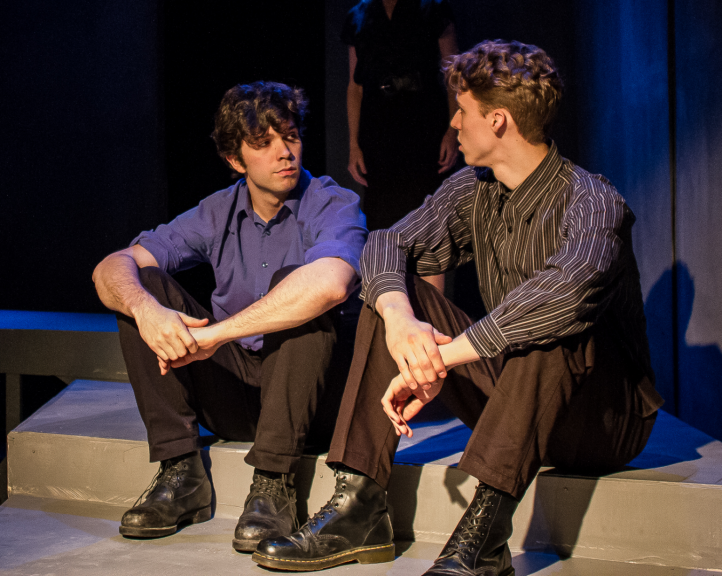 Peter Fechter: 59 Minutes is Jordan Tannahill’s award-winning one-act that chronicles the last hour of teenage Fechter’s life as he lies in the Death Strip, shot while attempting to cross the Berlin Wall in ‘62. The lives of “family, friends, and strangers unfold in the city around him,” as Fechter unpacks just why he would risk his life to cross. Presented by Matchstick Theatre at the Bus Stop Theatre Co-oop and directed by Alison Crosby, this relatively new company is continuing its exciting mission to resuscitate modern established Canadian plays here in Halifax.

Sarty is a warm, confident performer responsible for an onslaught of descriptive monologues. There is very little pause between narration and dialogue, at times so breakneck I found myself missing points. I wanted to sit in emotional, electric moments longer than they lasted onstage. Sarty is strongest in the too-few moments he gets to breathe with his fellow actors, especially Gielis. The chemistry between these two men is natural and lovely, but all too rushed. I wonder if Crosby’s goal was to stick to a 59 minute running time, but think the play’s poetry, relationships and queer undertones are far more compelling than the theatrical artifice of a countdown.

Tannahill is a huge name in the Canadian theatre scene, most notably as a playwright and curator of queer art in Toronto’s late, great videofag. According to Matchstick, “Tannahill expertly … explores what could possibly have motivated Peter to risk his life to cross the wall. What can matter to us so much that we risk everything for it?” In a Tannahill play starring two young male performers, I assumed Love, and the text supports this glean. Unfortunately, the pacing of Crosby’s production steam rolls through moments of connection between the performers. Fechter’s unexamined feelings for his friend have little room to breathe in the subtle way the script’s queerness depends on.

A solid foundation and raison d’etre are needed to successfully re-contextualize a one-person show with multiple performers, and examining the chemistry and connection between men in a queer story seems compelling enough a mission. Unfortunately the queerness seem more like an afterthought plot-twist than the tender actual underbelly of just why Fechter follows his friend to the Wall.

Narrative and emotional rhythms invite the audience into the play’s reality, and pace is how you hold them within the characters’ world. It’s the cardiovascular system that pumps stakes through the story to capture the audience’s investment. Directors can suspend time and let the magic of micromoments expand; pace is how we surprise the audience, rattle them, and the right timing of a reveal or reversal of rules can take their breath away. When a show stays in one tempo the entire time, the audience will start checking out, no matter how strong the script. And without stillness, how can the moments land? And if they don’t land, how much can the audience truly invest?

I am really hyped that Matchstick is here in Halifax and dedicated to the work of Canadian playwrights. It is also comprised of many recent grads who are emerging into the professional world and they are dreaming big and bold and that’s what the indie theatre scene needs. I’ll be at their next show with an open heart and great excitement!