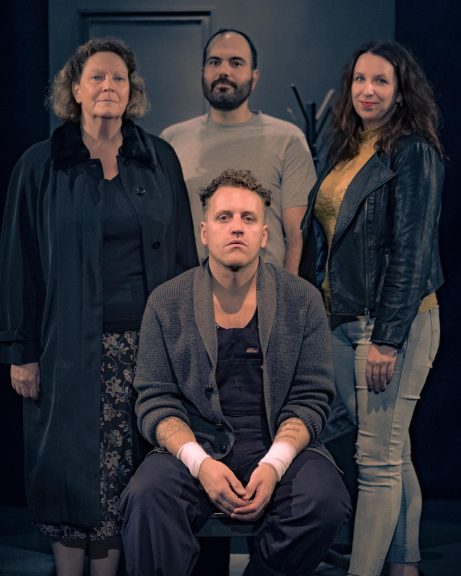 Tom at The Farm, by playwright Michel Marc Bouchard and produced by Workshirt Opera, has two shows left today, November 11th. Through direct address, searing dialogue, poetry, violence, and biting humour, TOM weaves the twisted story of secret boyfriend Tom, disturbed older brother Francis, and semi-senile mother Agatha, all mourning a beloved recently deceased Montreal advertising agent. Tom is in such a state of shock and fractured grief he cannot set boundaries, and spirals into an addiction to the strange and brutal farmlife Francis and Agatha perpetrate.

Innovative workshirt AD Michael Lake, known for his grand scope collaborative projects and intimate, playful theatrical experiences, directs this dark and muscular production with precision and confidence. The show is perfect for this post-samhain Scorpio season, an unstoppable flood of death, birth, transformation, darkness, violence, sex, and secrets that shift and alter the characters within.

Bouchard’s poetry deftly moves the narrative forward, and the performers exhibit a reverence for the wordplay while never over-luxuriating in the language. The inner-experience of obsessive thinking is presented in a Post-MacIvor, Moscovitch-adjacent direct address that Lake and his cast execute with compelling detail. The entire team beautifully LIVE, rarely “perform,” the experience of communication breakdowns and mental fragmentation caused by grief and trauma. As the family’s tragic past and complicated dynamics are revealed, the play unravels their lifetime of violence, gaslighting, secrets, and fear.

Grief and trauma can fuck us up. Our bodies and mind attach to pain and patterns. We re-live ~those~ moments over and over, trying to make some kind of sense. On a cellular level we are actually stuck in the moment of trauma, as the memory is physically stored in bundles throughout our body. The past therefore has direct access to our faculties and at any given triggering moment it can strike, making the Inciting Incident feel like the Direct and Present Now. We turn inside out as trauma unfolds and re-folds in our being, pitting body and mind against each other. How can you escape an internal emotional prison physically held within your cells?

Trauma’s ability to bend time back to its origins can grind a person to a pulp, arresting development on multiple levels. Sebastian Labelle’s bold and eerie turn as Francis shows how an adolescence of boiling isolation and sexual repression manifests into a grotesque and violent adult. Shelley Thompson’s Agatha balances a quivering despair and religiously-fueled briskness, a grieving woman who has been lied to for half her mothering years. (Plus “the lies I’ve told myself,” she laments near play’s end.) Agatha has had visceral hatefulness projected onto her by her eldest son, to the point her relationship was severed with the youngest. Was she so homophobic that lives had to be destroyed to keep her from knowing her son was gay? Thompson hits each ruptured layer of truth with stirring clarity and pain while Labelle evokes disgust, fear, and even slivers of empathy by tapping into the lost child soul within Francis’s darkness.

With Stewart “Light Flower” Legere’s alluring, tumultuous Tom we see grief feeding an inner recklessness,  detaching him from common sense almost completely. Legere’s authenticity in all he does makes for a refreshing and relaxed performance and a dynamic and detailed Tom. There is a simplicity to being, especially as he crosses into a delusional devotion to “farm life,” that gives Legere’s Tom a slippery, concealed descent while keeping the suspense momentum high.

Common Sense, or at least an outside eye, show up in the poised, hushed comic relief of Tom’s colleague/dead boyfriend’s Beard, Sara. There was a literal ripple of excitement and I think withheld entrance applause when the lights mercifully come up on Stephanie MacDonald ¾ of the way through. Sara is the only character who doesn’t share direct address with the audience, and with the magnetic and masterful MacDonald holding court there’s no need — she can palpably ripple an inner world through the house just by the way she sits onstage.

With Sara comes further clarity about the deceased’s sexuality. Francis weaponizes his brother’s bisexuality against Tom, and on top of his grief and the physical and mental torture of sadistic farm games, Tom still manages to be horrified not necessarily that his lover cheated on him, but that he deigned to have sex with women. The pain seeded in Tom’s reaction is clearly rooted in biphobia: a binary-bound belief that if your lover is intimate or has been intimate with a person of a different gender than your own, their attraction to you is compromised.

Gay Men belittle their bisexual brothers and monosexual queer folks gatekeep the 2SLGBTQ+ community in myriads of micro-ways (it means attraction to “two or more genders” not to “men and women,” just so you know).  But let’s not ignore that biphobia has roots in Straight Up Misogyny: “ew, women” is one ingredient, “bi men are actually just in gay denial” is another, oh and of course all bi women will “end up” with a man “anyway!” (Good Lorde, I’m gonna puke just typing all that Patriarchal nonsense.)

Labelle and Legere play the flippant nuance of how prejudice against bisexuality presents itself, even/often by other queer people, not to mention the misogyny held by men regardless of their sexuality. The boyfriend’s bisexuality is dismissed, barely even considered as an identity. This is a painful erasure tactic that isolates many folks from the very community that should be embracing them, or keeps people in a binary sexuality way of thinking that can further confuse, closet, and compromise a person’s being. Lake does not overcomplicate the moment beyond allowing the truth of that harmful thinking to land onstage, the same as other moments of hatred, violence, underbelly emotions.

Particularly within the present context of Halifax’s theatre scene, it’s reassuring to attend a queer story by a queer writer presented by a team of powerful queer artists/explicitly active allys. When a story of marginalized characters are presented without an artist representing that group on the inside (or only in there as a token of diversity, not in a decision-making authority), how could that same particular group feel safe in the audience?

Sad to say I feel the need to say this, but I do so I’m saying it: I’ve felt On Guard during entire performances when this hasn’t been the case, distrustful of how sensitive subject matter – trauma in particular – will be handled (how’s that for “too optimistic about my local theatre scene,” [redacted]?). Workshirt Opera’s production brings us the raw, the grotesque, the painful. The team certainly don’t “play safe,” but I didn’t feel UNsafe from my seat as risks and boundaries were being creatively pushed.