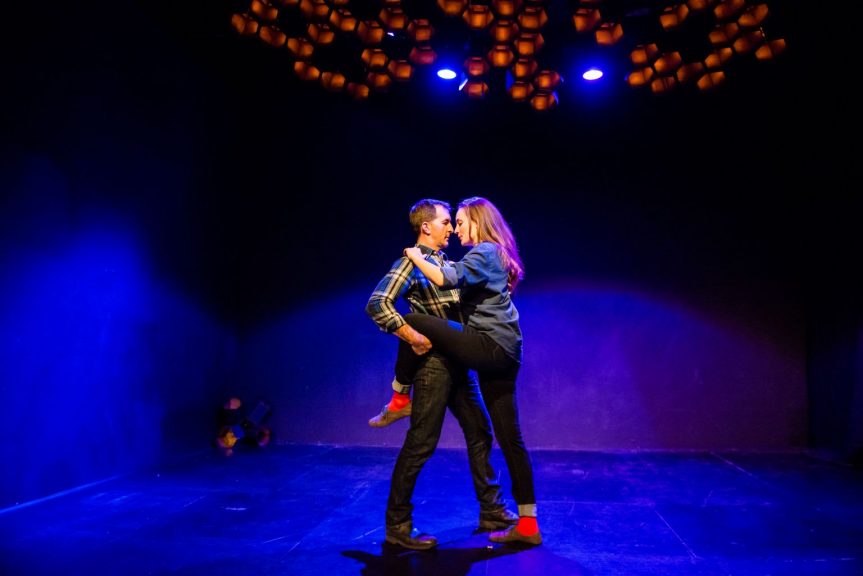 Constellations, presented by Keep Good (Theatre) Company, is British playwright Nick Payne’s most recent hit. Using string theory and the idea of multiverse, the show explores love, mortality, free will and relationships, jumping from universe to universe as the actions of Roland (Jeff Schwager) and Marianne (Lesley Smith) influence their reality. Directed by Keep Good-er Laura Vingoe-Cram, the play is a rapid-fire showcase of possible outcomes, where entire lives can change depending on levels of inebriation, proposal locations, one’s mood at dance class, or the ability to land a joke.

The seamless moves between possibilities are contrasted by specific scenes from the “Real” universe, in which Roland and Marianne stand and deliver lines of their conversation to the audience. This marks the tragic beginning of the end of their life together, revealing just how how high the stakes are and why Roland and Marianne might be obsessing over meeting in the first place.

Smith and Schwager are delightful and engaging as they spiral through motifs, razor-sharp in every universe they land. Both are incredibly giving performers, offering guttural moments of grief, romance, heartache and bliss, a perfectly cast duo. Smith’s gift for earnest vulnerability is outstanding — she never ‘plays’ at an emotional state but truly lives in it, gracefully taking the audience with her.

While the “rapid-fire” pace of the overall piece serves Constellation’s lighter tones, it occasionally does a disservice to the actors and emotional reality of its characters. My heart could have stayed in some of the heavier beats longer, and my brain could’ve used space to unpack parts of the script’s evasive nature.

Seeing an independent company in Halifax produce a contemporary script is refreshing and ambitious. Keep Good’s stellar team pulls it off, bringing a lovely myriad of moments to life.

Constellations runs 8pm Saturday and closes at 2pm on Sunday October 23rd.
All advance tickets are sold on a Pay What You Can basis until 48 hours before the performance.
Tickets will be available at the door for $20 (cash, cheque, or credit card).

Tickets are available at www.constellations.brownpapertickets.com