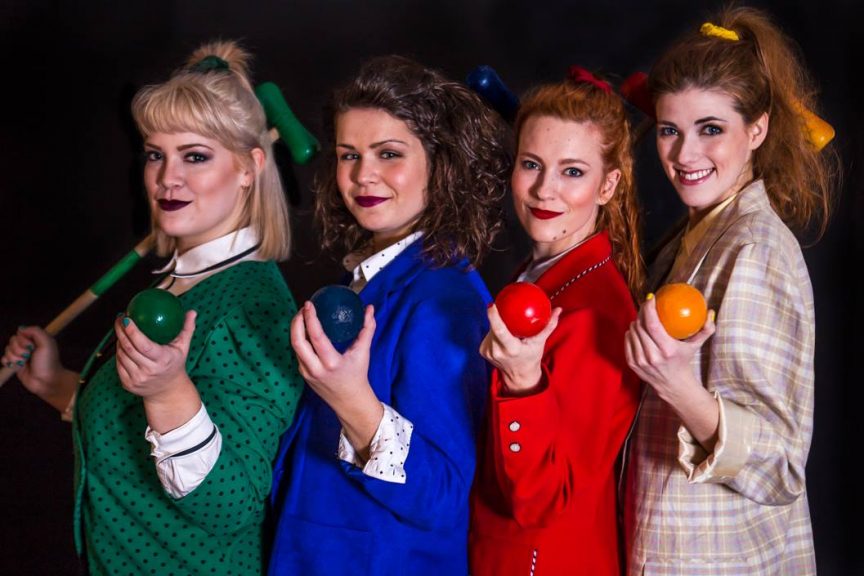 The first time I saw 1988 cult classic Heathers, it was midnight in a pre-gentrified Saint Henri. I was 21, crammed in a tiny living room drinking cheap Dep wine from the bottle.

The movie was bleak, dry, and scathing. It was my beloved Mean Girls, but meaner. It was Jawbreaker — remember Jawbreaker? — with worse behaviour and better writing. And it provided a satisfying yet chilling critique of teenage life. Rather than glorifying the high-school underbelly, Heather blows the ugliness up, creating darkness and discomfort and earning itself an R rating.

Heathers follows teenage Veronica’s journey from misfit outcast, to high school royalty, to an unwilling albeit lovestruck revenge artist. Eventually Veronica’s “teen angst bullshit” starts racking up “a body count” and she must choose between saving her classmates, or her dark and broody boyfriend J.D. – the embodiment of toxic white masculinity.

Halifax’s Whale Song Theatre has brought Heathers: the Musical (book and lyrics by Laurence O’Keefe and Kevin Murphy) to the Bus Stop Theatre this week. Directed by Emily Jewer, the production merges brand new actors with upcoming professional artists, and uses the framework of community theatre.

This hybrid leads to a somewhat uneven production: a mix of excellent performances and affected greenness, kick-ass musical direction and rock star voices with underdeveloped staging ideas that squish a large cast onto a tiny stage. It’s clearly an ambitious feat for the company, and their production has plenty of brilliant moments.

Melissa MacGougan’s Veronica is a delightful departure from the infamous Winona Ryder performance. She is a fresh presence in Halifax’s theatre world and a much needed combination of earnestness and vocal prowess. Having missed the more recent Shakespeare by the Sea seasons, this was my first experience seeing the heralded “Googs” onstage, and she was, as the Heathers would say, very. I left the show wondering “who is this dope artist and how long can we keep her in Halifax?”

I did miss the hateful dryness of Winona’s Veronica, but I feel that has more to do with how the film was adapted, than performance. It’s no easy task to step into the role of a beloved character from pop culture, and I don’t know how I’d fare walking the line between audience expectation and authentic character development.

Tamara Fifield plays the queen of the Heathers, a foremother of Regina “Why Are You So Obsessed With Me?” George. Fifield looks – and definitely sings – the part, but much of her text was lost on me, all her lines delivered in the same cadence and rhythm.

There’s a handful of standout performances in the show, and lots of new faces in the theatre scene to look out for. My favourites were Shanoa Phillips as Heather Duke, who absolutely shreds her vocals and is hilarious as Chandler’s second-in-command. Morgan Melnyk nails all her one-liners with ease. Nick Cox & Tyler Craig are the jock duo who get a bulk of the fun songs, and are a treat to watch play off one another.

Julia Topple as the most vulnerable bitch, Heather McNamara, steals the show. Topple is the real deal and plays the mean girl trope with a perfect balance of nuance and humour. She effortlessly moves from the comedic and campy style into a striking performance of the show-stopping, grief-soaked solo “Lifeboat.” Topple can break your heart as easily as she makes you cackle-snort, and watching her perform is a dream.

Admittedly, when I first heard that a Heathers musical was being made a few years ago, I was uncertain of how the “up-chuck factor” would translate when infused with pop songs. The camp nature and hormonal teen energy make Heathers an obvious choice to score. Now having seen it, it’s clear that the characters remain scathing but the musical itself loses the original script’s crass satirical bite.

All that being said, the vocals are this production’s highlight and musical director Sarah Richardson proves the company’s strongest asset. And if you’ve never seen the film (or aren’t looking for the differences like my obsessive self), it’s such a fun night at the theatre and damn if that’s not exciting in itself. I love that we now have a group of Halifax artists dedicated to musical theatre and new work, and I look forward to whatever the next installation of Whale Song brings.

Heathers: The Musical plays nightly through Saturday at the Bus Stop Theatre.
7:30pm, Saturday/Sunday matinee at 2pm.
All shows are currently sold.

From Whale Song Theatre:
“Doors to the theatre open at 7pm and the bar will open around 7pm as well.

Any tickets that aren’t claimed by 7:25pm (or 1:55pm) we reserve the right to release and re-sell. There will also be no late-comers call, so if you’re late you will have to wait in the lobby until intermission.”