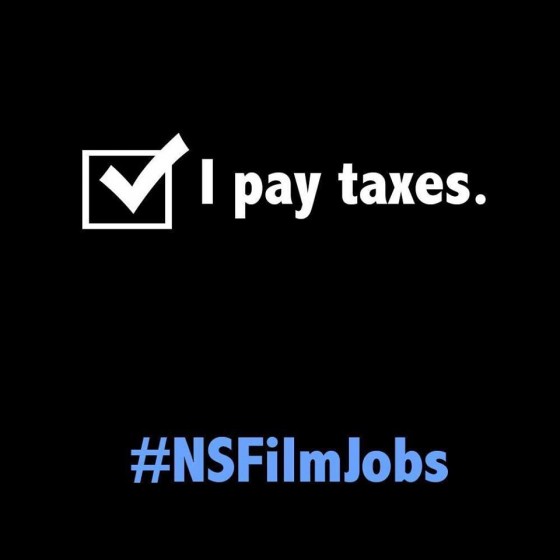 Anyone who rolls their eyes and thinks that’s what politicians do…maybe take a second to think about how helpful that complacency is.

Excusing politicians ISN’T helpful.  We live in Canada where we have the right to have our political voices heard. To change our minds if our leaders fail us, and to take a stand and protect our livelihood when that livelihood is threatened.

Finance Minister & Deputy Premier Diana Whalen has threatened to cut our province’s Film & Television Tax Credit. The province paid $24 million dollars in credits in 2014, a steep number for the tax-payers sure…..except that this credit ushered in $139 million for the province and employed over 2,000 Nova Scotians. That’s actors, sure, but it’s employing scenic designers, caterers, technicians, who got their supplies from Nova Scotia businesses. That money was spent enticing film companies from all over the world to sleep in our hotels, dine at our restaurants, rent our cars, check out our province and add to its economy. It’s a tax credit that keeps young Nova Scotians in our province, and employed. Considering how many over-educated, under-employed buds I know, this is a feat in itself and enough reason to keep the credit around — to say nothing of the fact that the Liberals’ 2013 platform promised to extend the Film Tax Credit for another five years.  (Do the math! Spot the DECEIT!)

Now, I am a theatre-person and this is a theatre-blog. At first I was confused about this whole Tax Credit debacle and unsure of how it would affect me. It took a phone-call from local actor/producer/Sailor Scout/politically-minded feminist/long-time best friend Lesley Smith to help me draw a somewhat obvious conclusion. This threat to the Film & TV industry is a direct threat to the theatre community as well. I could list at least thirty theatre artists I know and whose work I enjoy that depend on Nova Scotia’s booming film scene to get out of debt, buy property, pay their bills (and taxes) in between less lucrative theatre gigs. It’s a blessing that so many of our theatre artists can be employed creatively through movie-of-the-week shoots and television hits like Mister D, Trailer Park Boys and Haven, as opposed to the clichéd and less flexible table-waiting. (But let’s be honest, even a job waiting tables or coffee-slinging is hard to come by in NS’s economic climate.) We lose the film industry, the theatre community suffers too. Furthermore….these artists will leave Nova Scotia, and it will not be pretty when they do. (Or fun, who wants to live where there’s an absence of artists?)

Something to remember is that you gotta spend money to make money. Not just in the arts, but in any business whatsoever. As mentioned previously, Whalen has fought for this tax credit in the past, stating “The Film Tax Credit is an essential part of this industry’s success here in Nova Scotia.” Past-Diana, you are CORRECT.

But rallying against Whalen’s threats is more than just trying to save an “industry.” I personally am tired of the old adage that artists are somehow separate from society, as if we live in a distinct land free from government or responsibilities or taxes,  as if we don’t care about our city/province/country.  The most politically active people I know, who brush up on party platforms and do research before voting, are artists.

Artists are important members of society. It’s more than filling galleries or filming trailer parks. Artists design buildings and parks, they write and illustrate and compose evocative advertising for businesses.  They are often environmentally conscious, forward thinking, and open-minded. They make the world around them beautiful and they inspire change by demanding more when the world isn’t so beautiful. They are not DIFFERENT from society, they are the very people who make the melting in a culture’s ‘melting pot’ happen.

I urge you to sign this petition being sent to NS Premier Stephen McNeil to preserve the Tax Credit and help maintain jobs and living wages for thousands of Nova Scotians.

You can read more about what MLAs and Politicians have to say (or avoid saying) at OpenHouseNS.Ca

For more information on Screen Nova Scotia’s Call to Action, and how to contact your MLA, click here