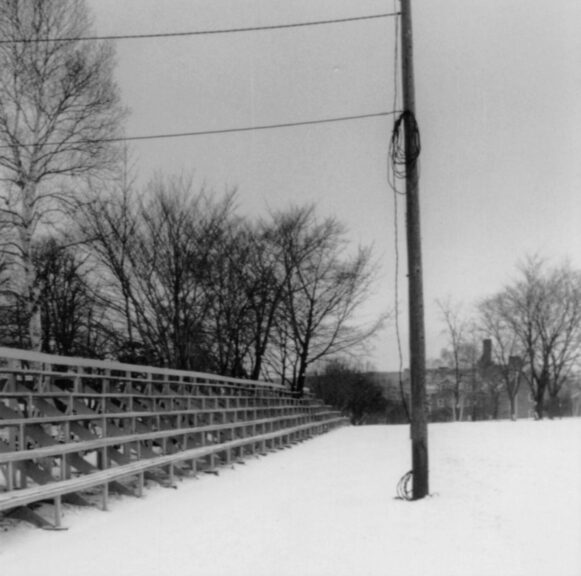 This is the second album of my little collection of photos, arranged in more or less chronological order.  A selection from 1965/66.

Here are a couple of views from Citadel Hill. These days we don’t go up there from one year to the next, but then it was a more vital destination, with three museums and an art gallery located inside the fortifications. How old and tired the city looked. In this photo the most outstanding building is also the most recent, the 1936 Dominion Building with its distinctive tower.

I turned my camera slightly to the left for this view. The focus was on the two guys, lounging like cats, pretending not to notice one another, or perhaps shouting a remote conversation. This block was cleared around 1980 for the Metro Centre. I had hoped for more modern building. Be careful what you wish for. 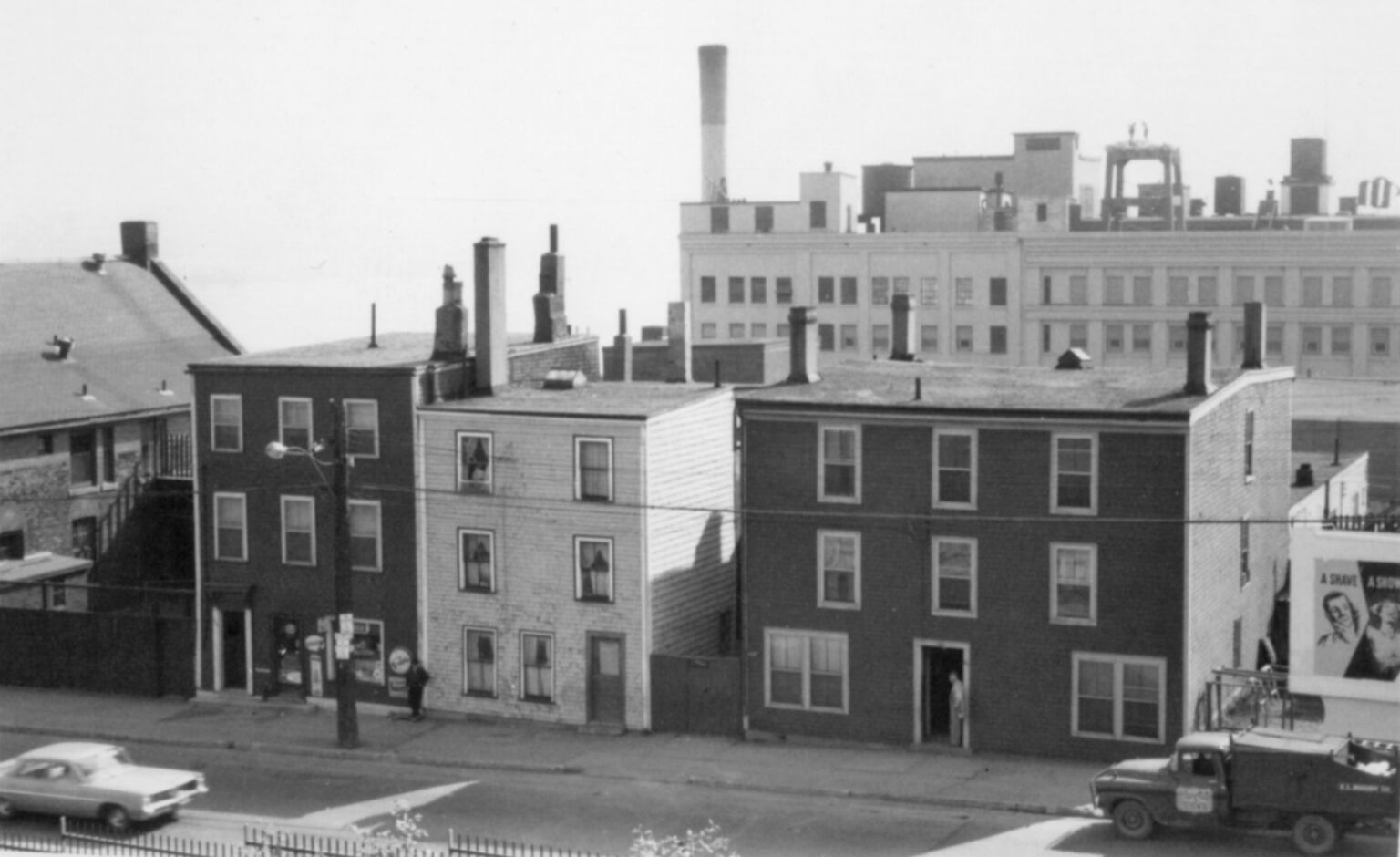 On another occasion I took this street level shot of Joe’s Grocery, also shown above. 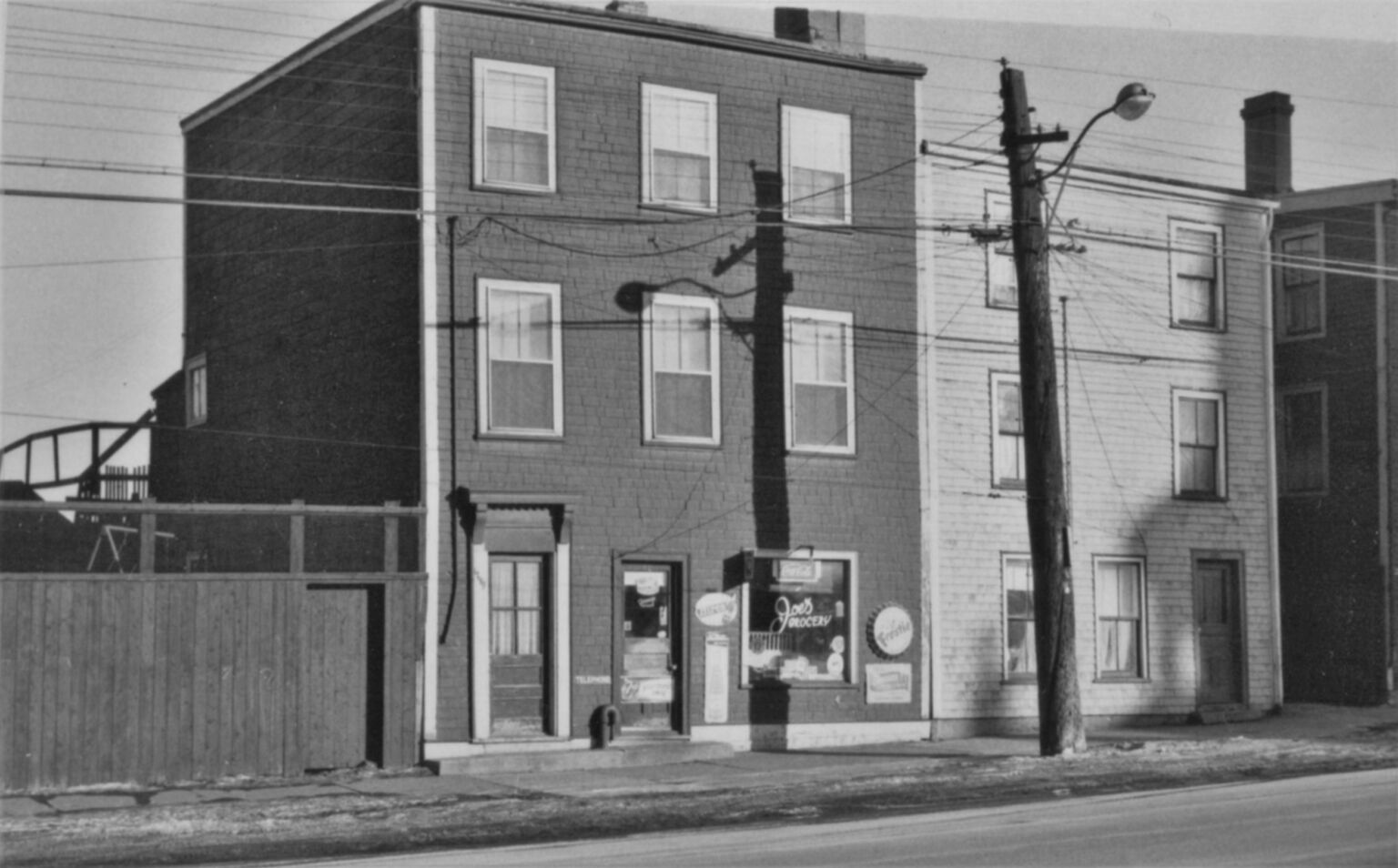 Away from the main commercial streets, downtown Halifax was incredibly rundown. My photo of the Town Clock captures this decay. 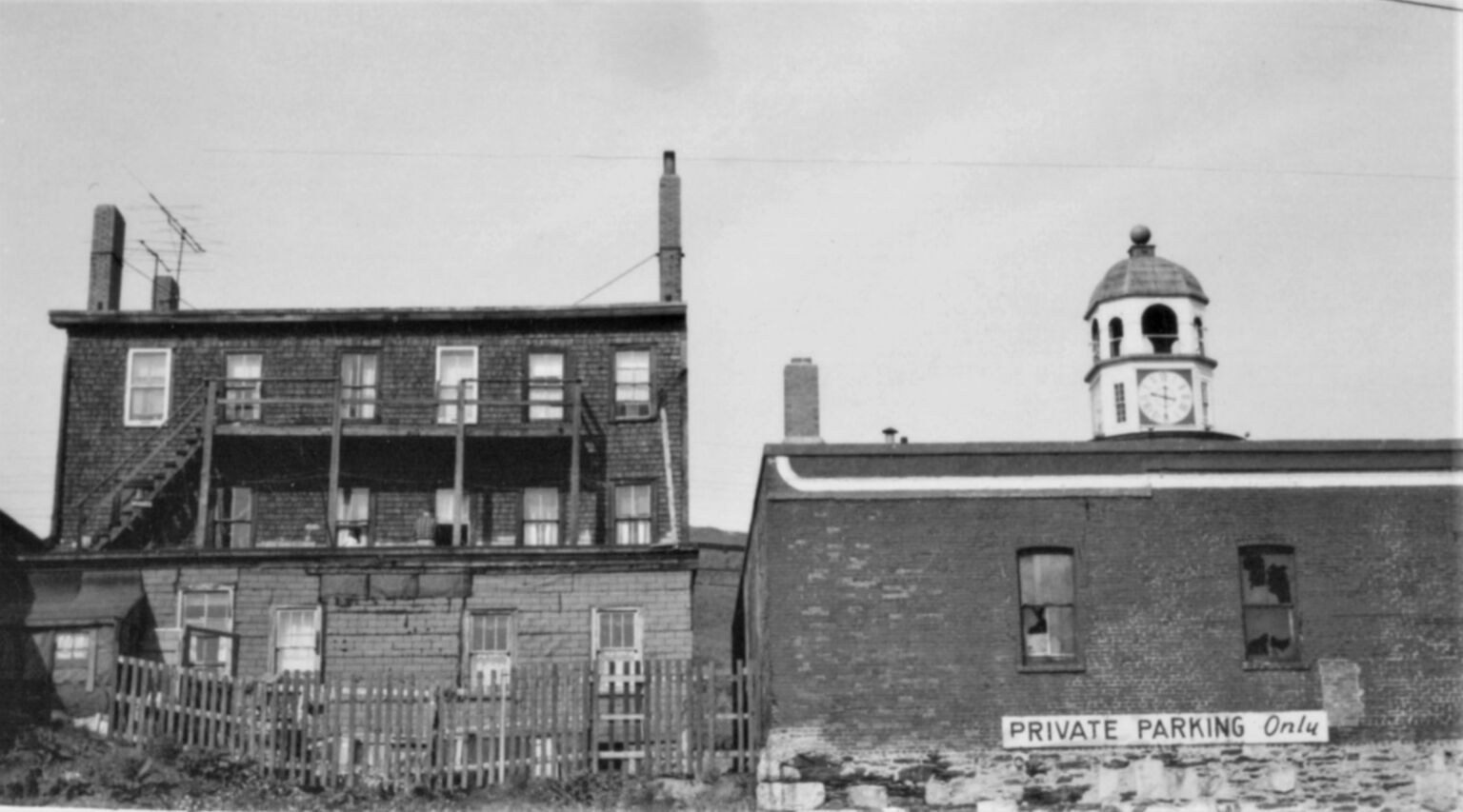 Nova Centre now occupies the first two blocks on the left. Further down the street is the Canada Permanent building that was only about three years old in this picture. What a well-mannered addition to the streetscape. You might now know it as Durty Nelly’s. 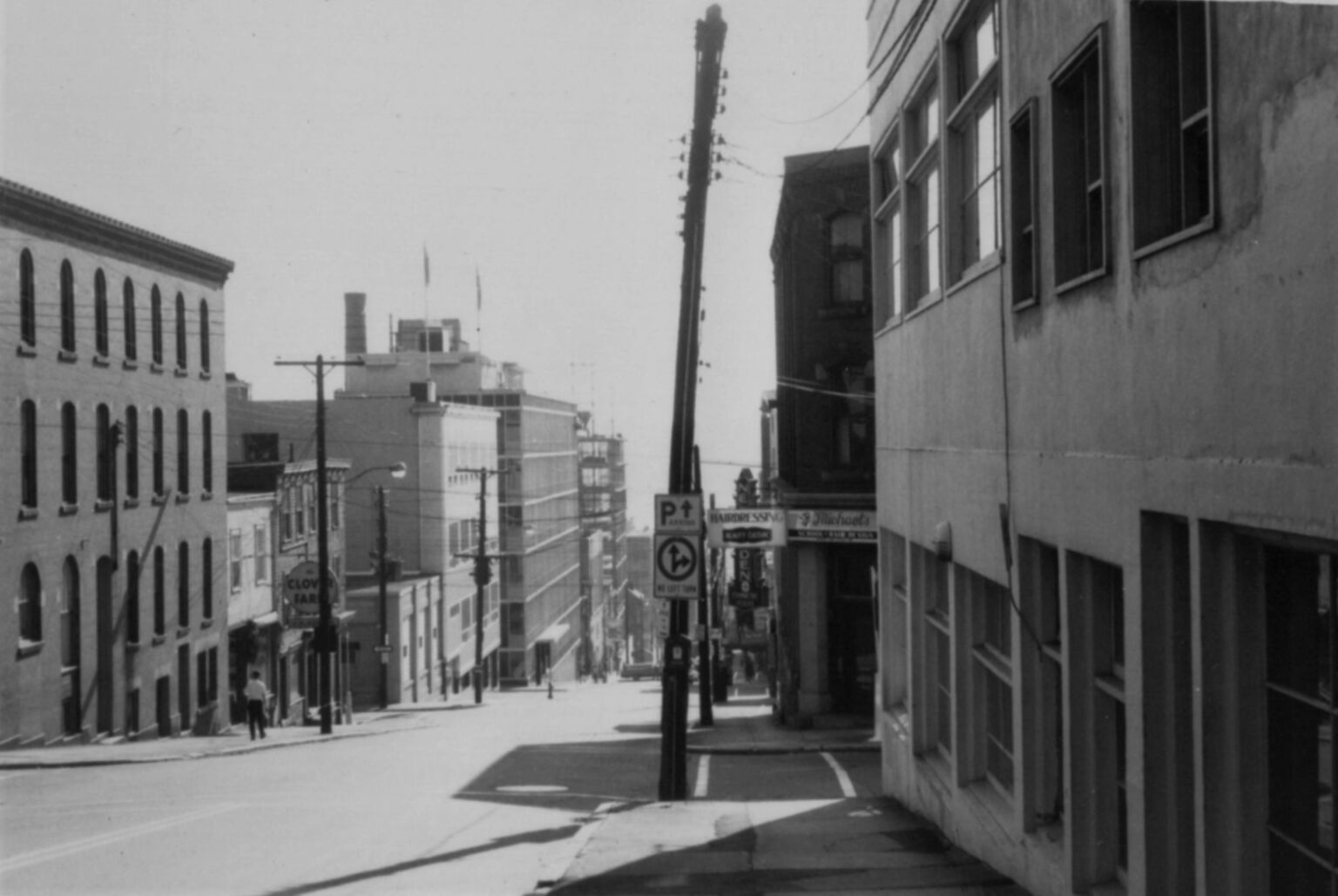 I suspect that this poorly focused image was just me trying to capture a street scene but this would soon be one of the most notorious locations in Halifax. The low stone wall bordered a patch of lawn at the corner of Spring Garden Road and South Park Street and became a gathering place for counter culture youth, who could spend many hours sitting here doing not very much. Various attempts were made to discourage the long-haired hippies, which only made The Wall more attractive. Eventually the Lord Nelson Hotel built out over the tiny green space and removed the opportunity for sitting. 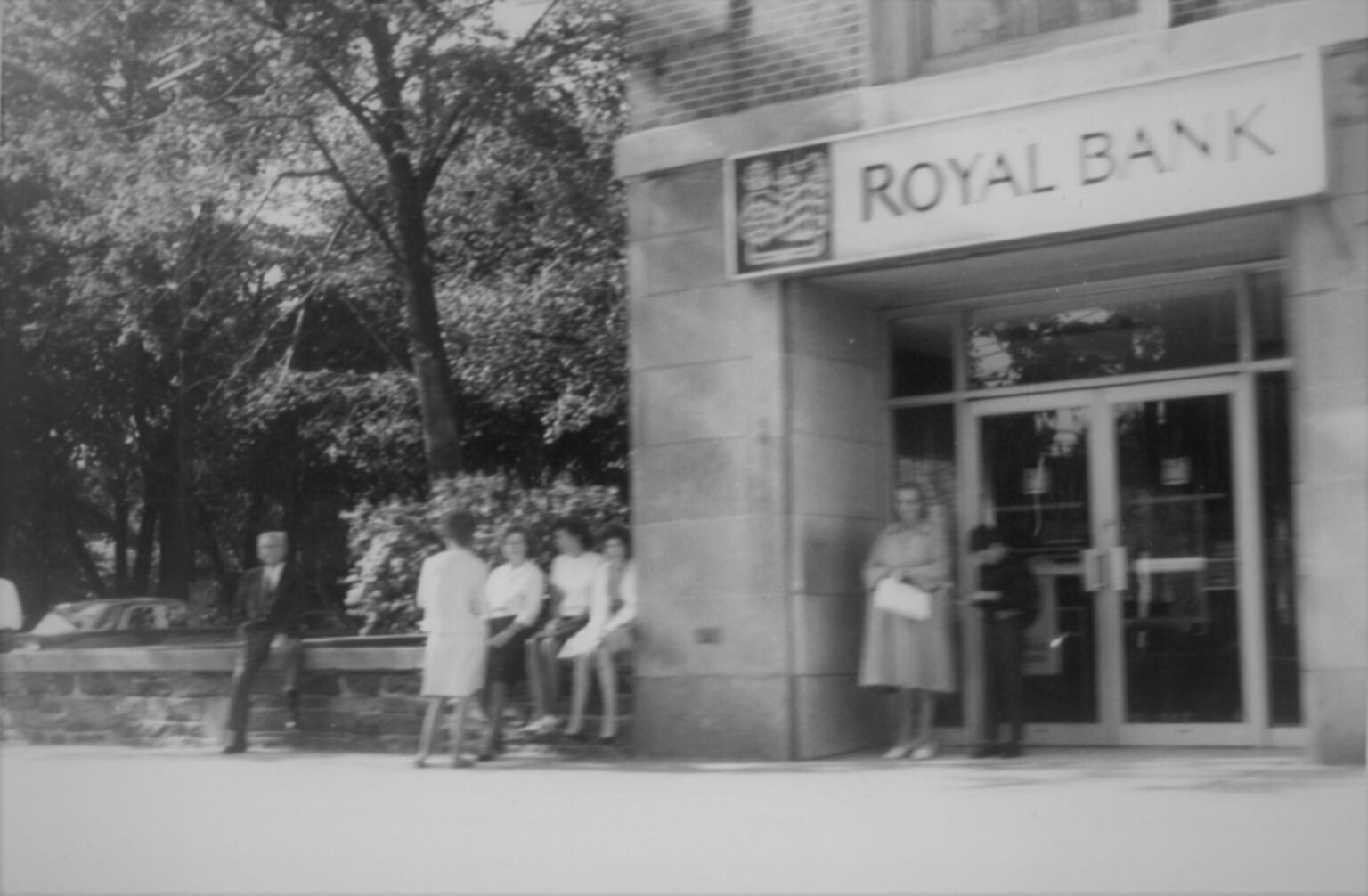 Silent as the Grave

A green space that virtually no one visited in 1965 was St Paul’s Cemetery, at the foot of Spring Garden Road. In the early 1960s I read about a new interest in gravestone art (in Time Magazine!) and this started me on a lifelong interest in cemeteries. My first visit to the Old Burying Ground was a revelation, as I discovered what were clearly masterpieces of 18th century stone carving. 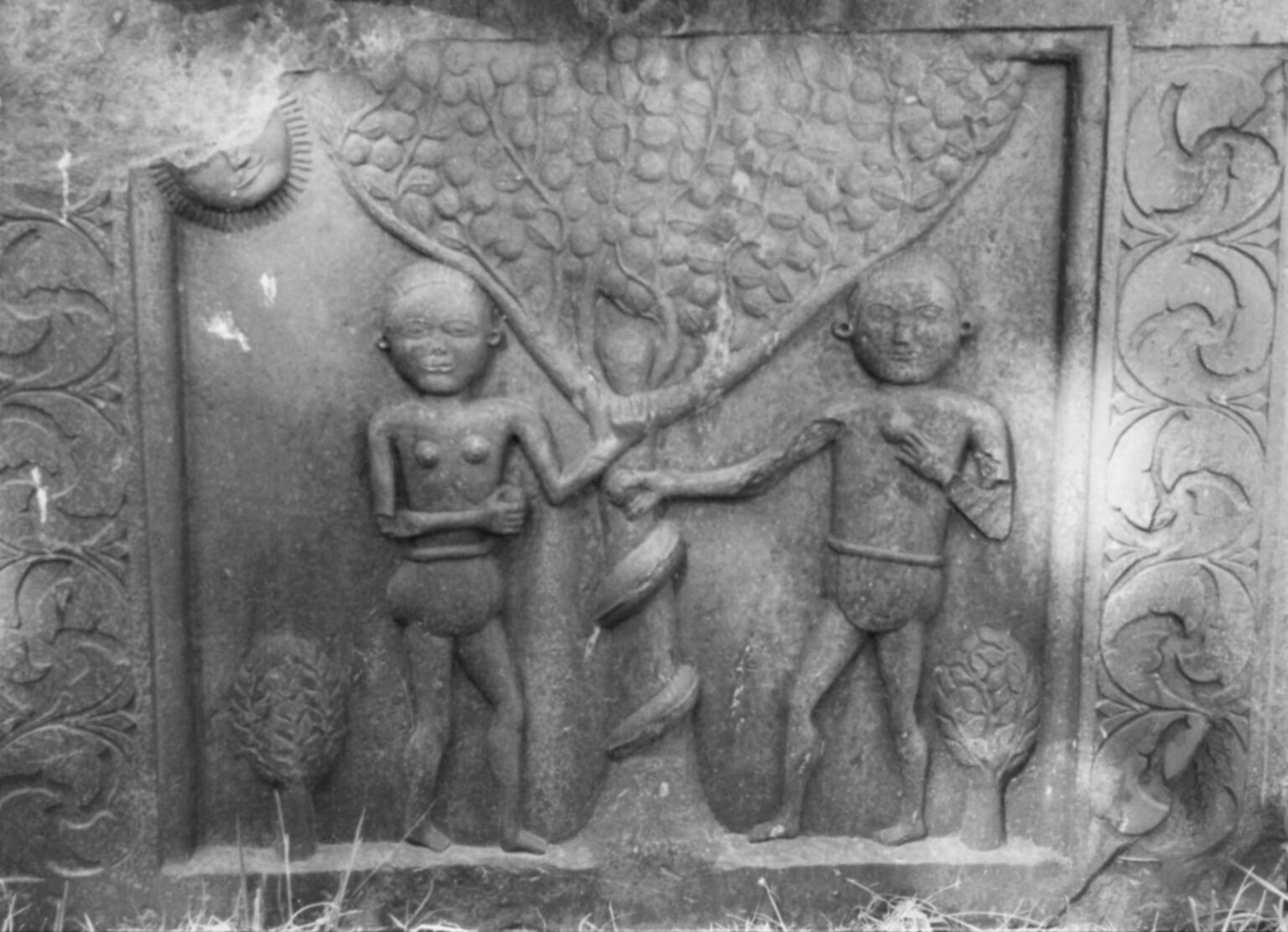 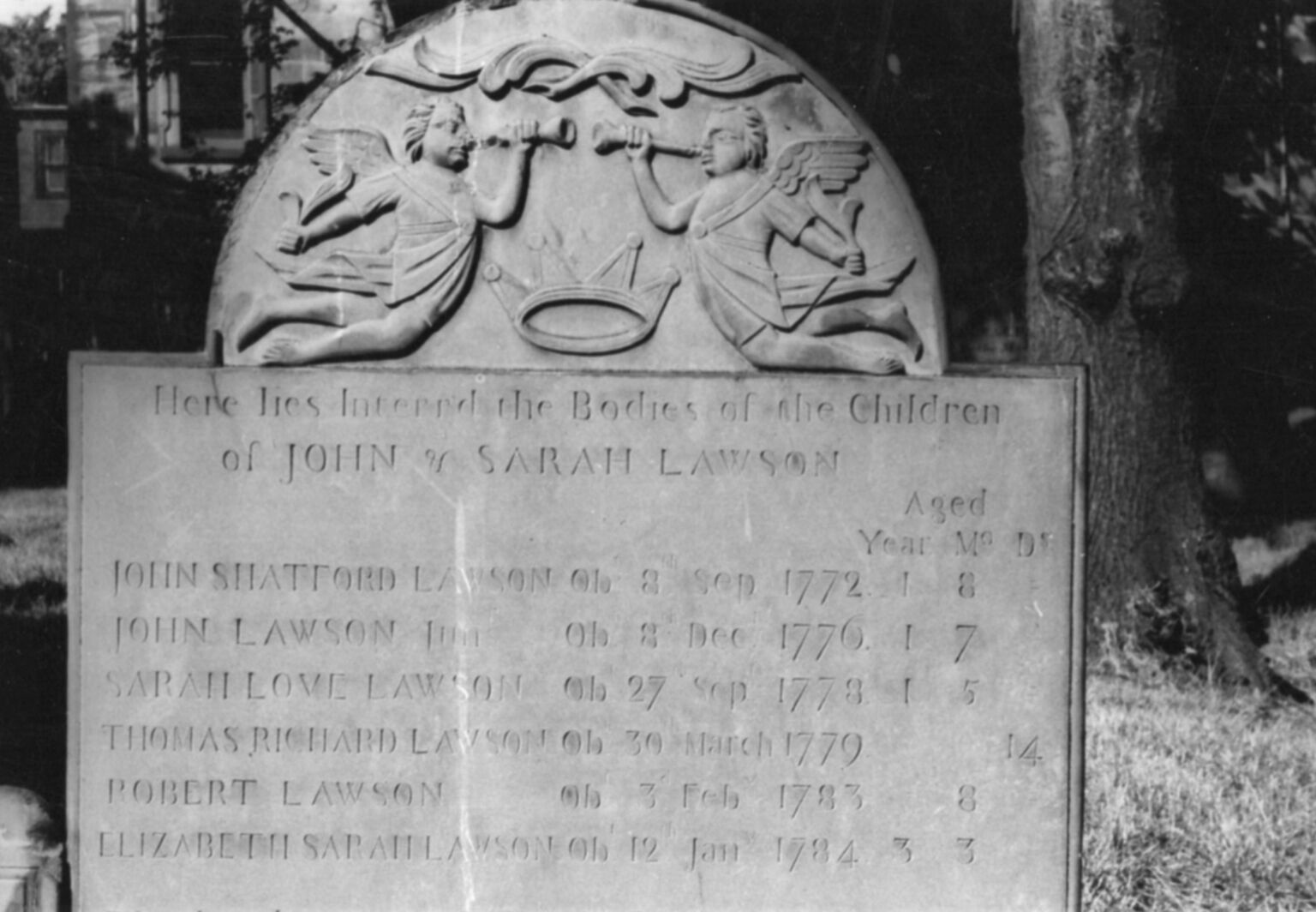 Away from the downtown I remember trying (and failing) to take artistic photos on a dull winter Sunday afternoon. The result was a series of pointless shots of the wooden bleachers at Studley Field on the Dalhousie campus. 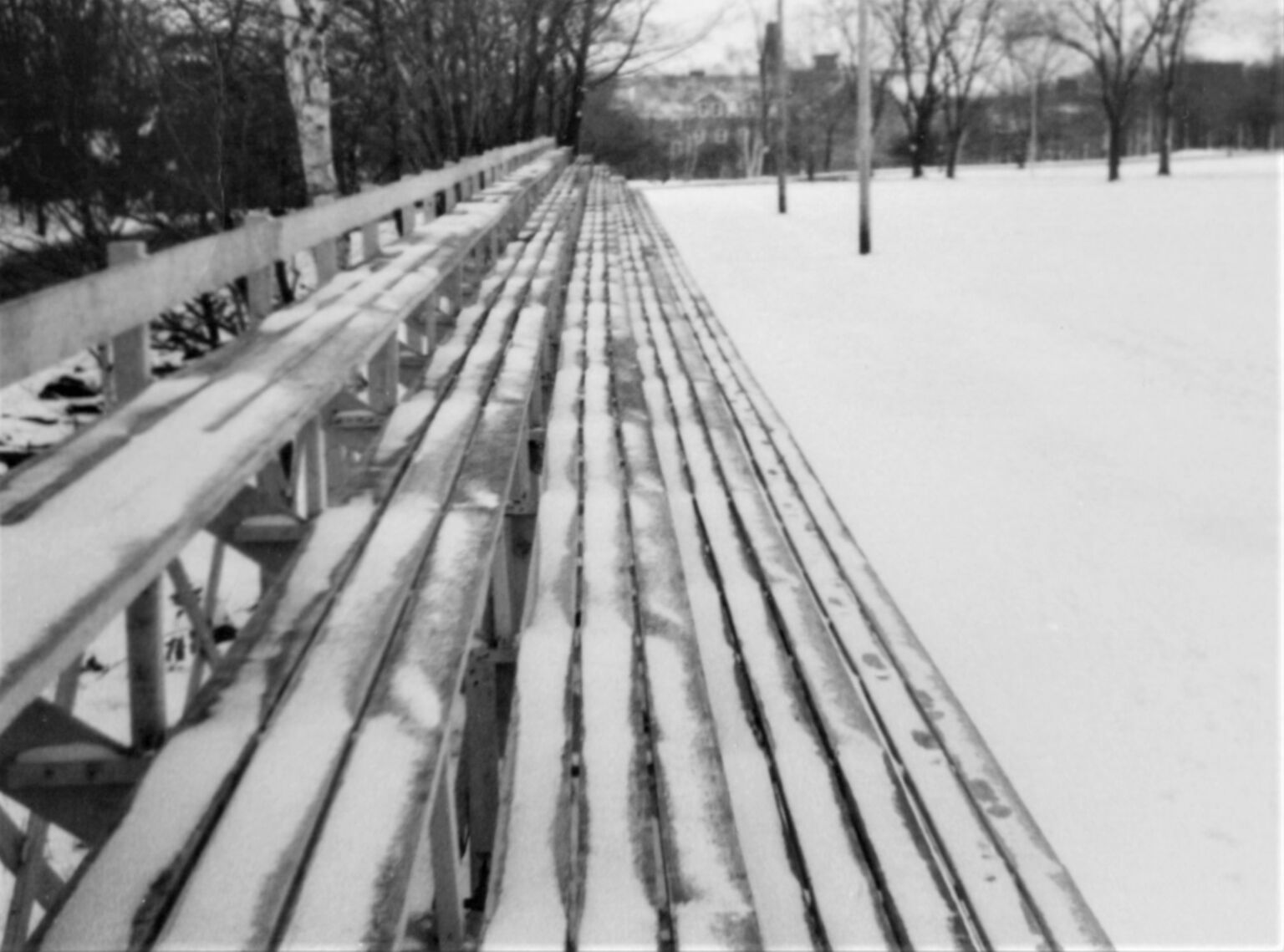 Now this is called Wickwire Field to honour football star Ted W., who had only stopped playing a couple of years before this picture.

Then I started on the tracks in the railway cut. 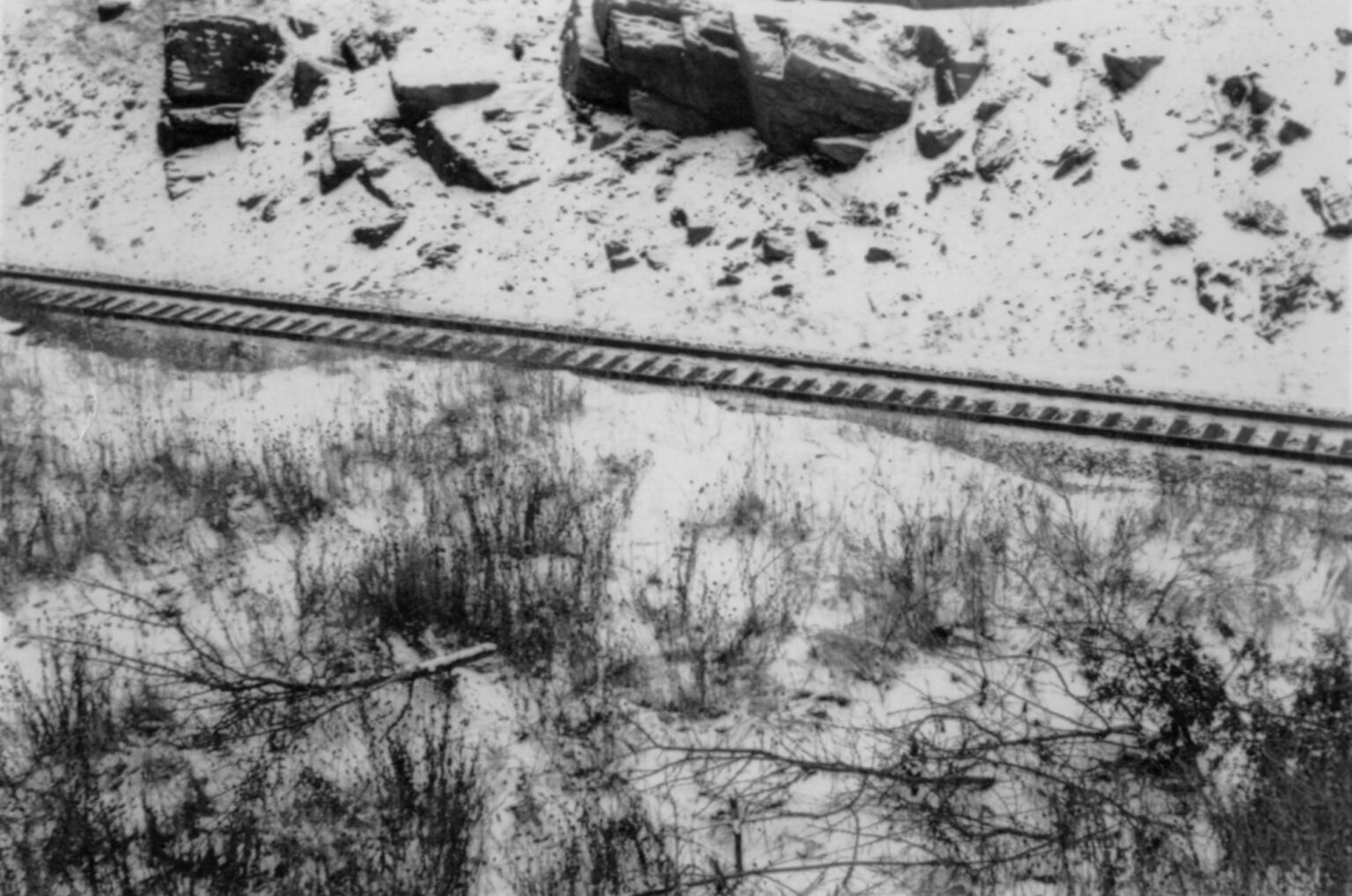 Took a picture towards the Arm at the end of Oakland Road, a view that is virtually unchanged after 50 years. 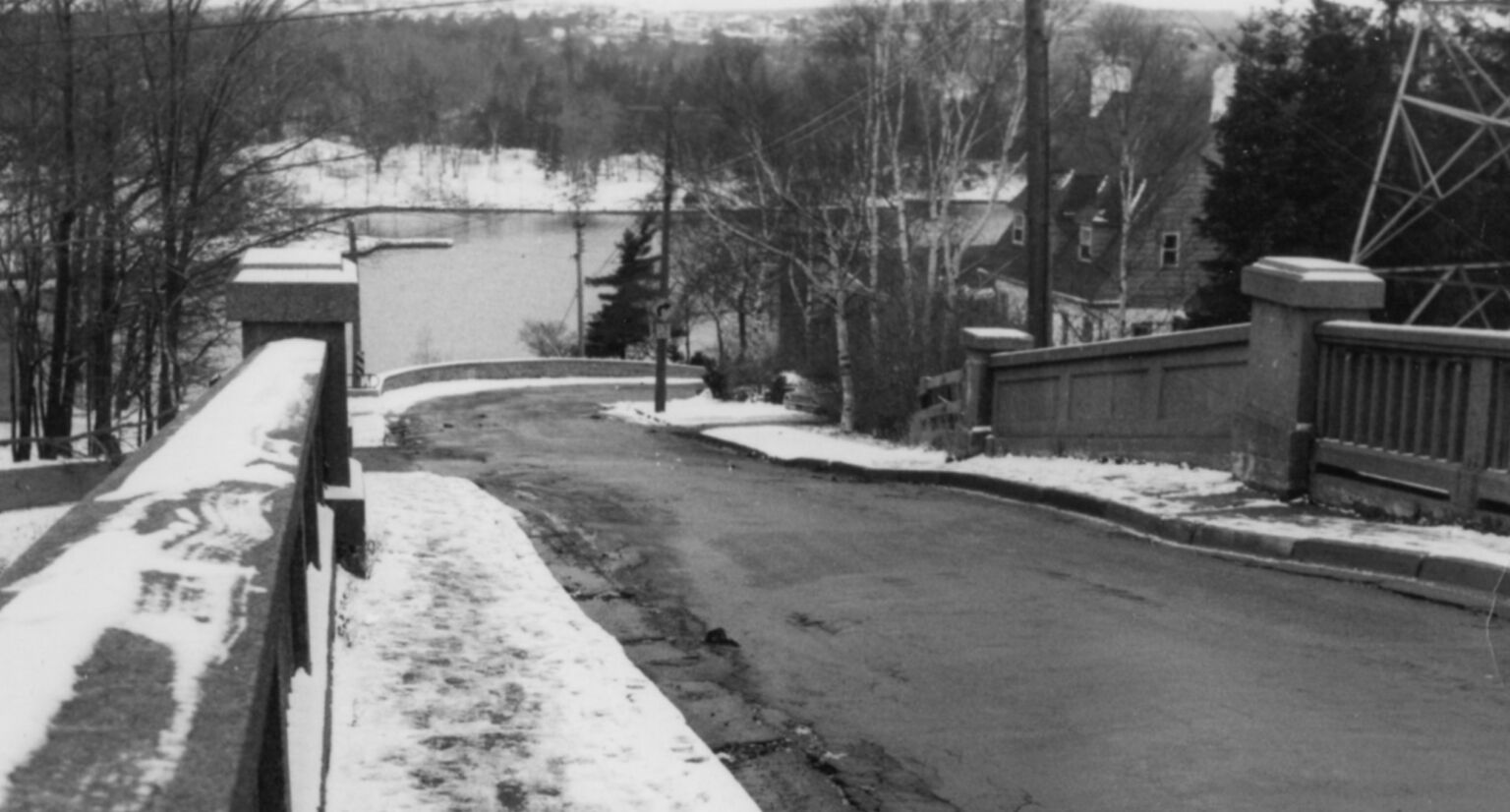 And took pictures of a house that I liked on Beaufort Avenue, and still appreciate. 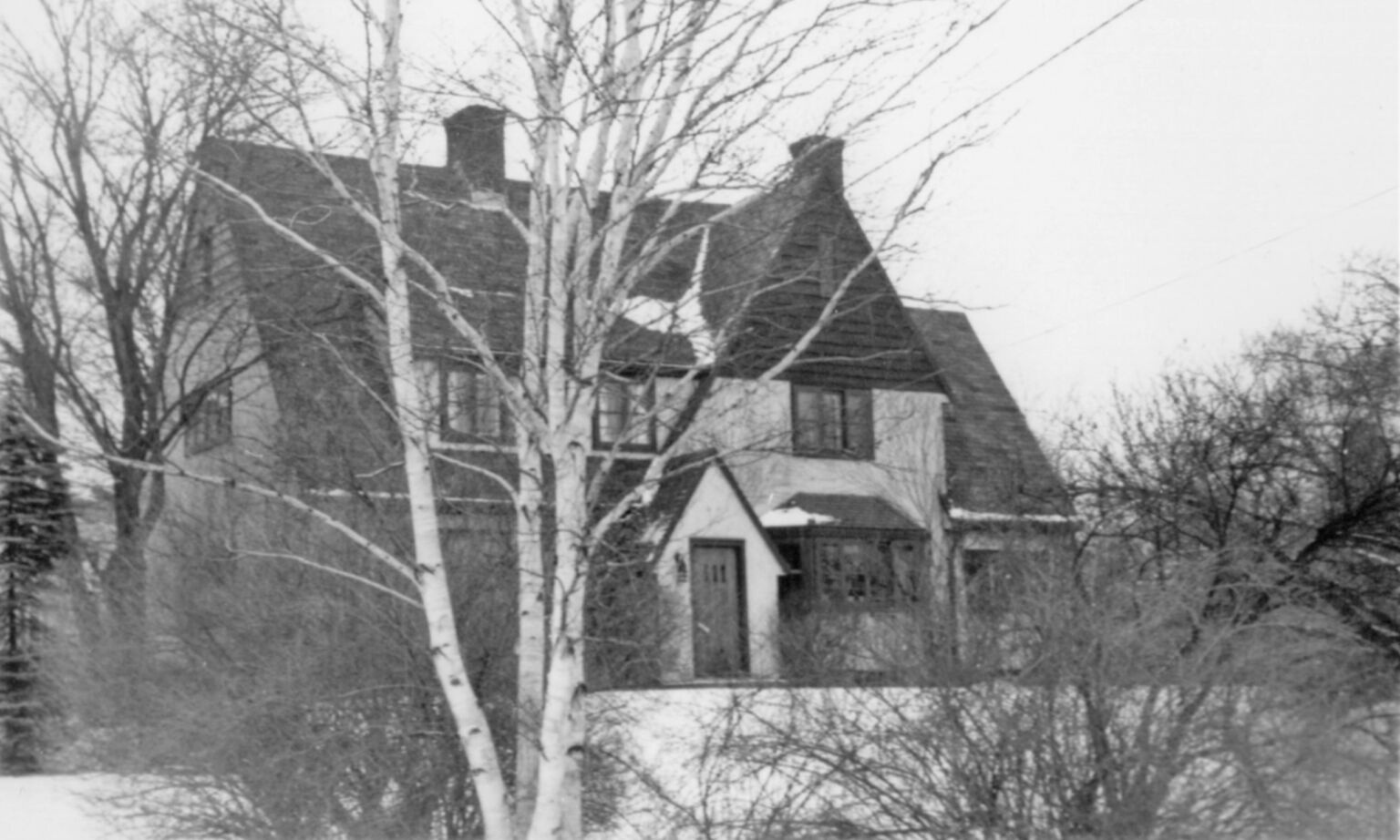 I remember being chastened when I got the prints of these snow scenes. Next Album I’ll try to do better.