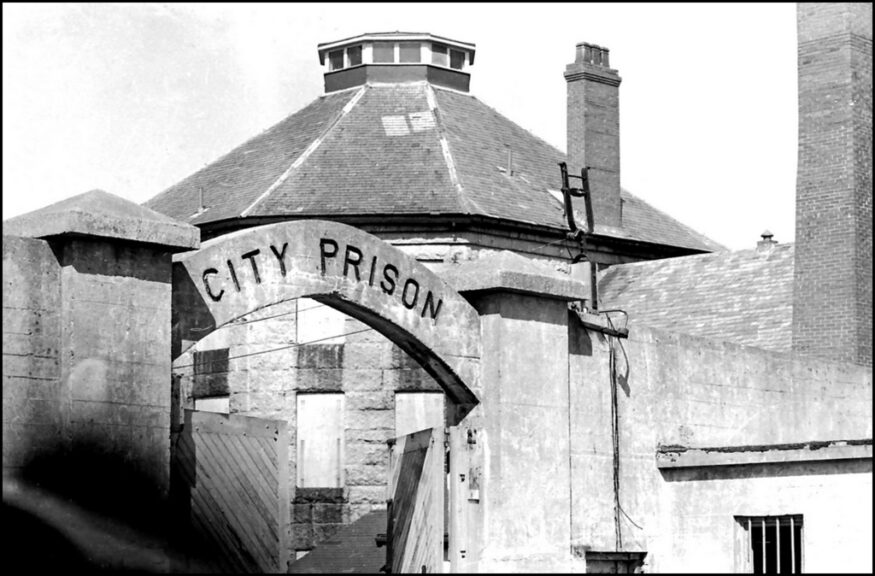 This is the sixth album of my little collection of photos, arranged in more or less chronological order. Watch me self-consciously trying to be arty. By this album I’m getting a bit vague about exactly when each photo was taken, so let’s say they all come from the very last years of the 60s and the first few of the 70s.

Old signs and typography, in general, were subjects I sought out. This is a portion of a Shamrock Tobacco sign that was on the side of a building near the Halifax ferry terminal, at the base of George Street. Several of these huge signs were painted on waterfront buildings, and similar Shamrock signs could be seen in St John’s and Saint John. 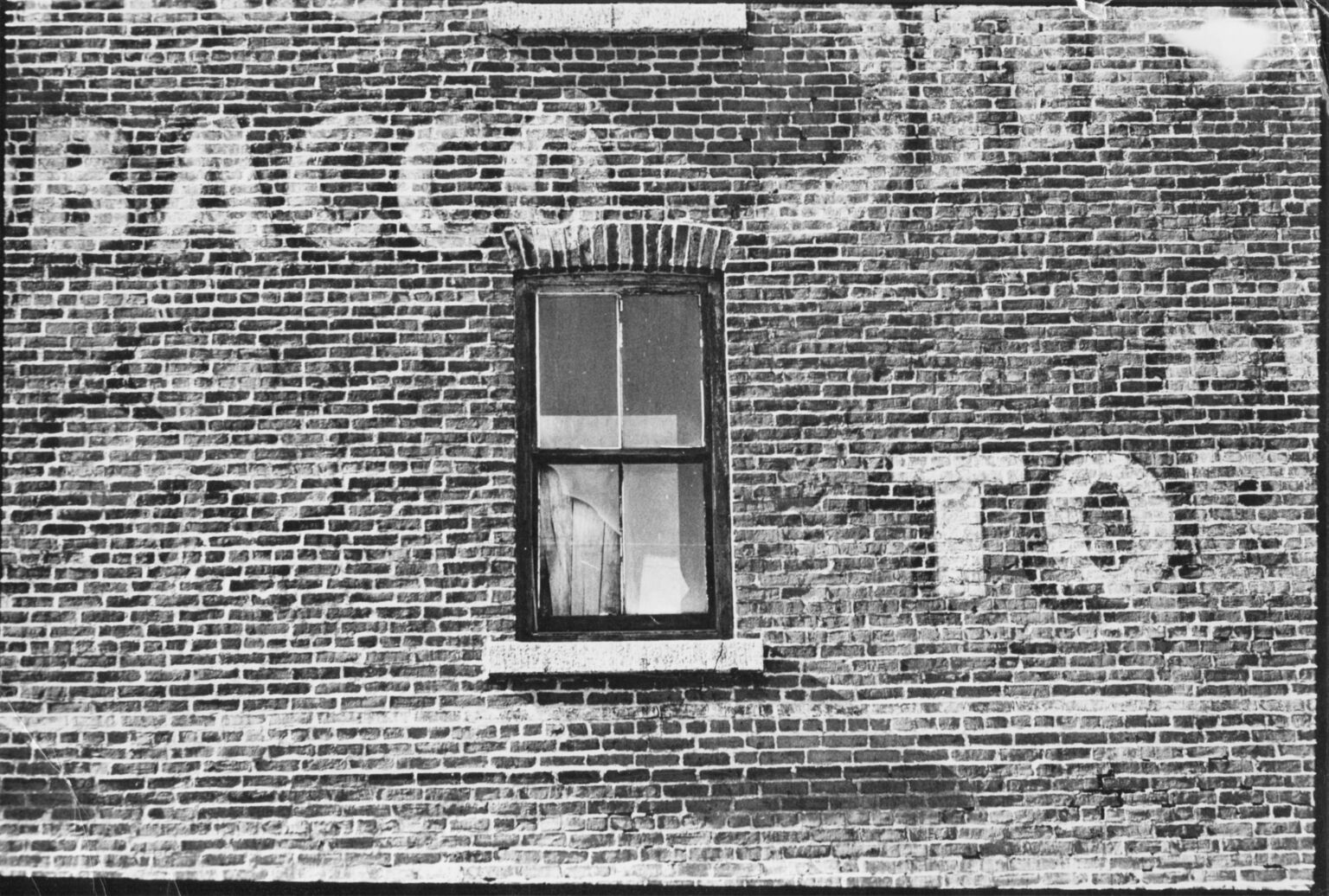 On the west side of what is now the Granville Street Mall was grand signage for Quality Shoes. 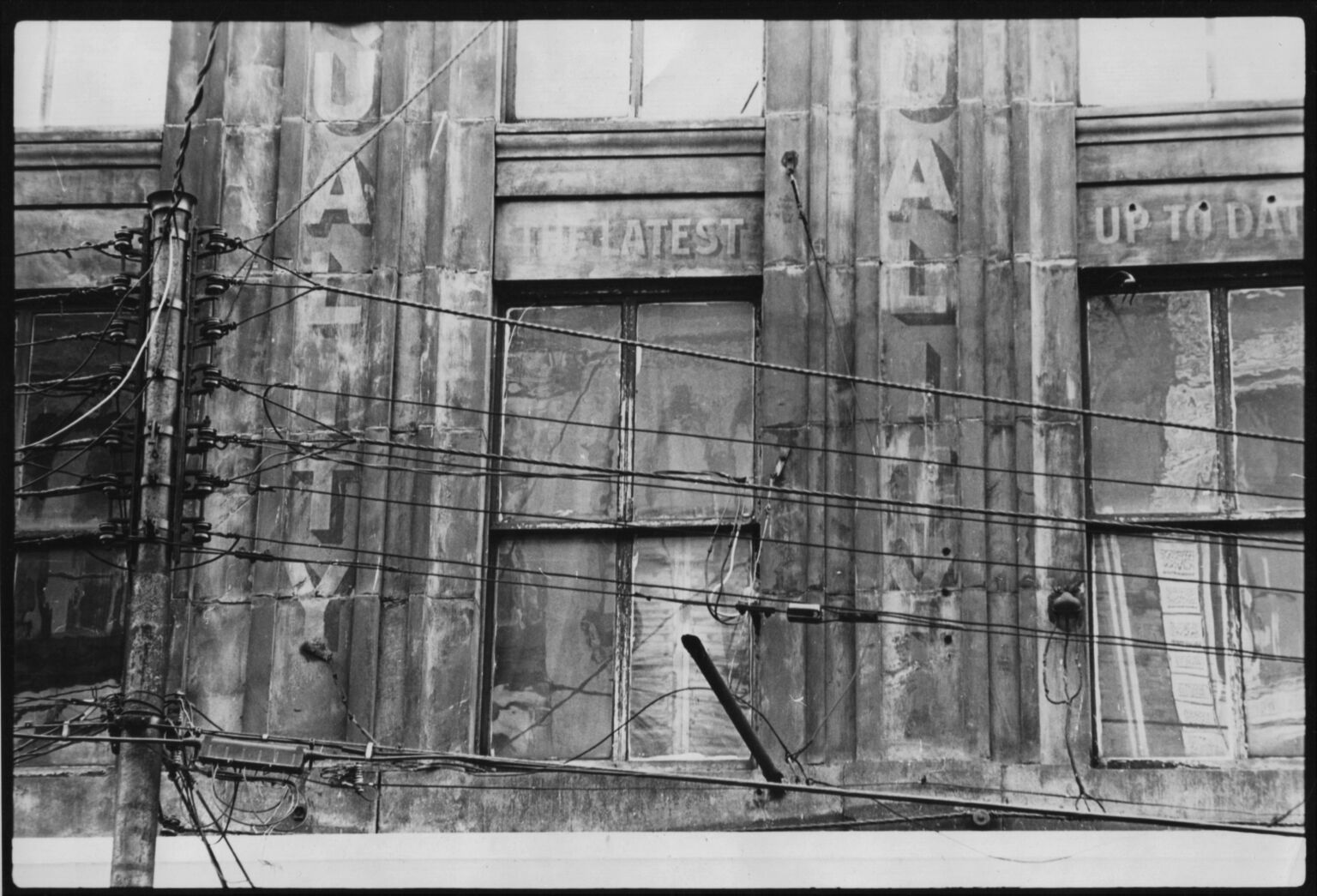 This is the Privateer’s Warehouse in Historic Properties before restoration. Imagine trying to save such a thing today. Only if you stuck a tower through it. 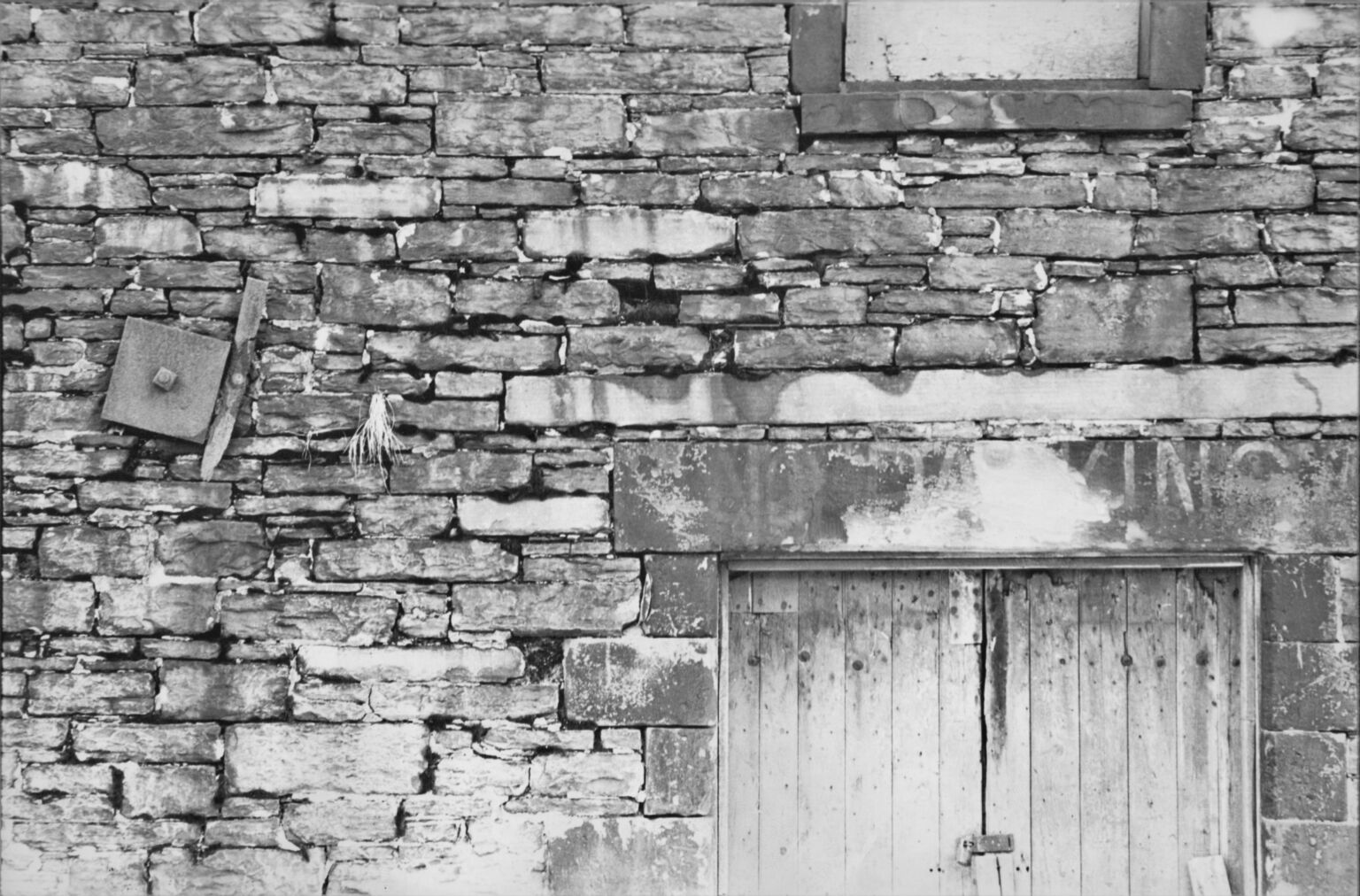 Buddy is walking by numbers 53 and 55 in this Google Streetview. The numbers disappeared when the sandstone was sandblasted, the cleaning method of choice in the 1970s. 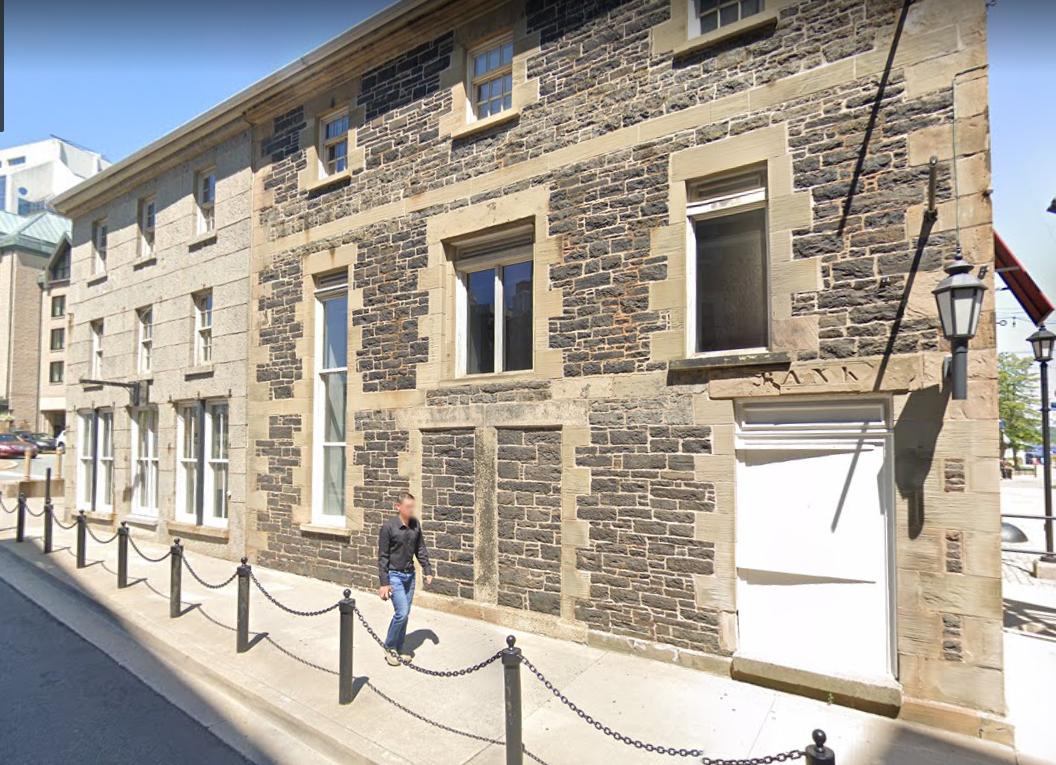 Mike O’Brien’s pharmacy at the corner of Coburg and Lemarchant was just across the street from the Art College’s 1970s location. I like to think that someone from NSCAD designed this super-graphic, that radiated in shades of purple, and perhaps orange. A big bright gesture in a winter city. 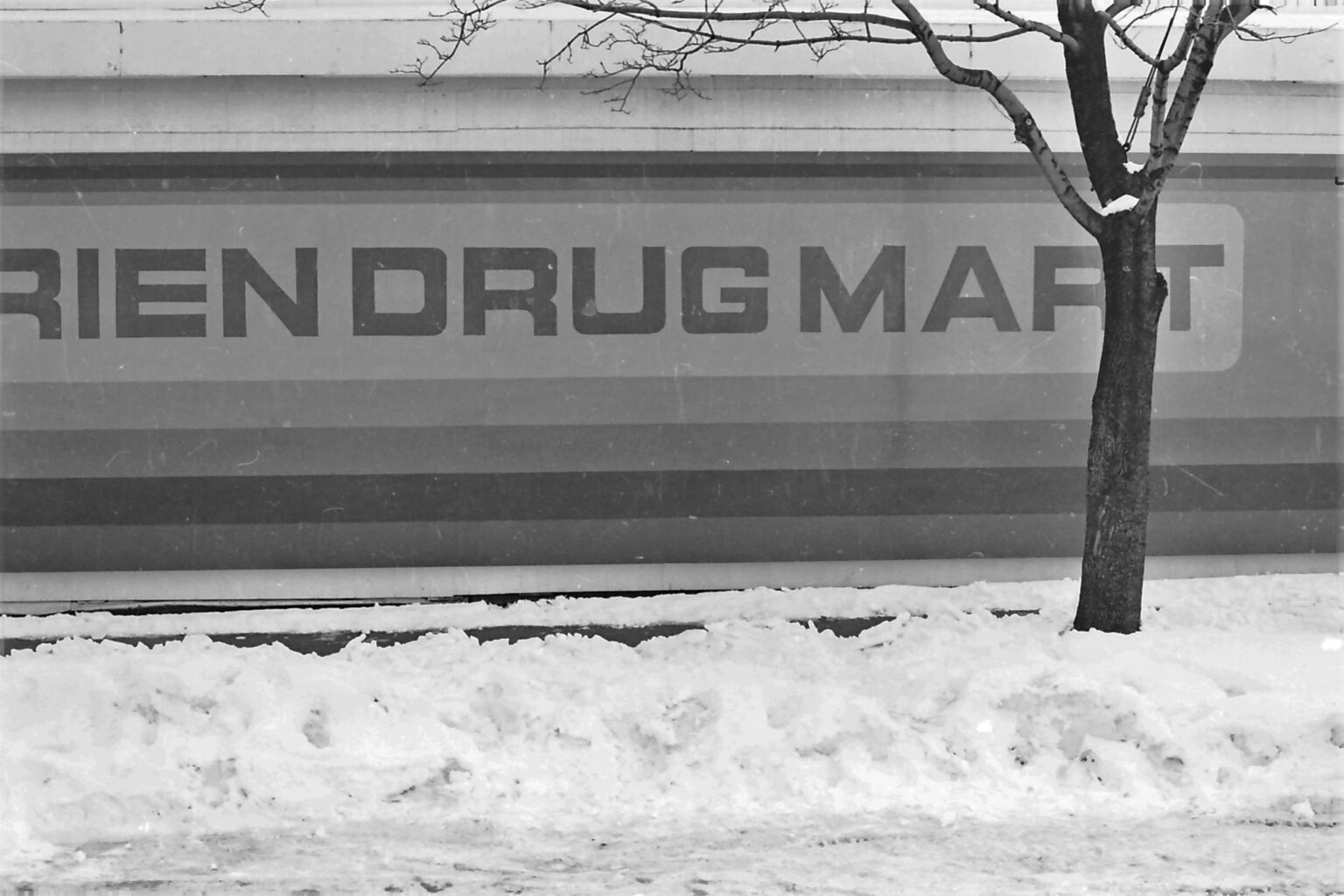 The current building in that location is all about taupe. And if that sad tree has not yet been replaced, put it on the list. 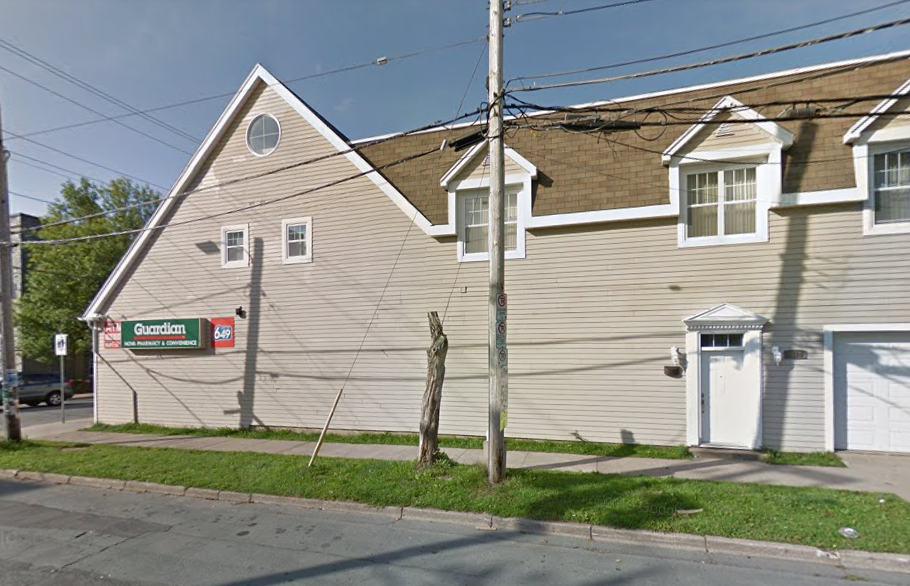 Around 1970 the Gondola on South Street was one of the best restaurants in town. It also had rich surface decoration in an Italian style. 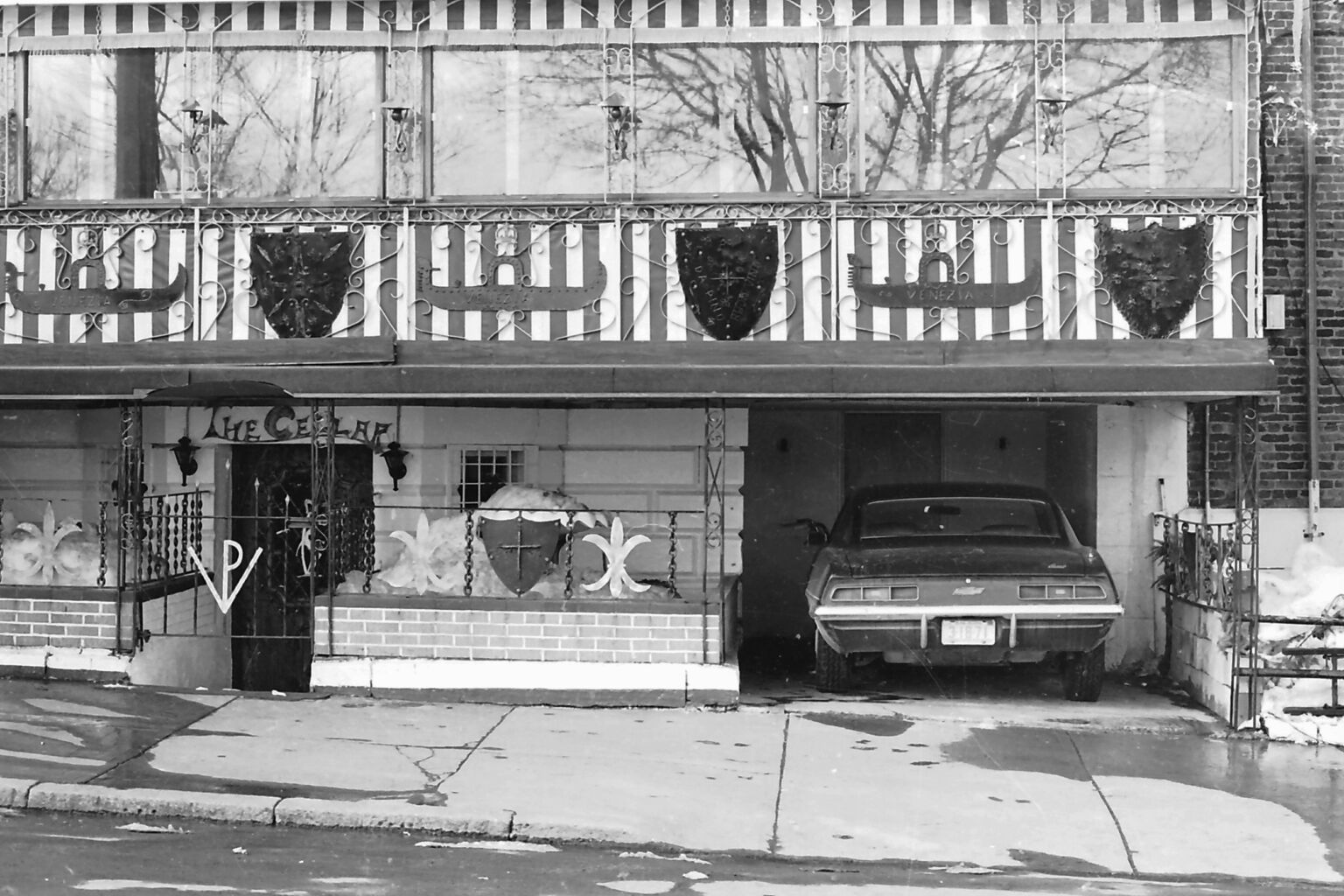 In the 60s there were lots of gas stations downtown (with staff to pump the gas for you, and who then sprinted back from the office with your change). This photo shows a station on Argyle at the corner of Prince (that’s the Carleton across the street reflected in the window, along with the photographer). The white glazed brick must have sparkled at one time. 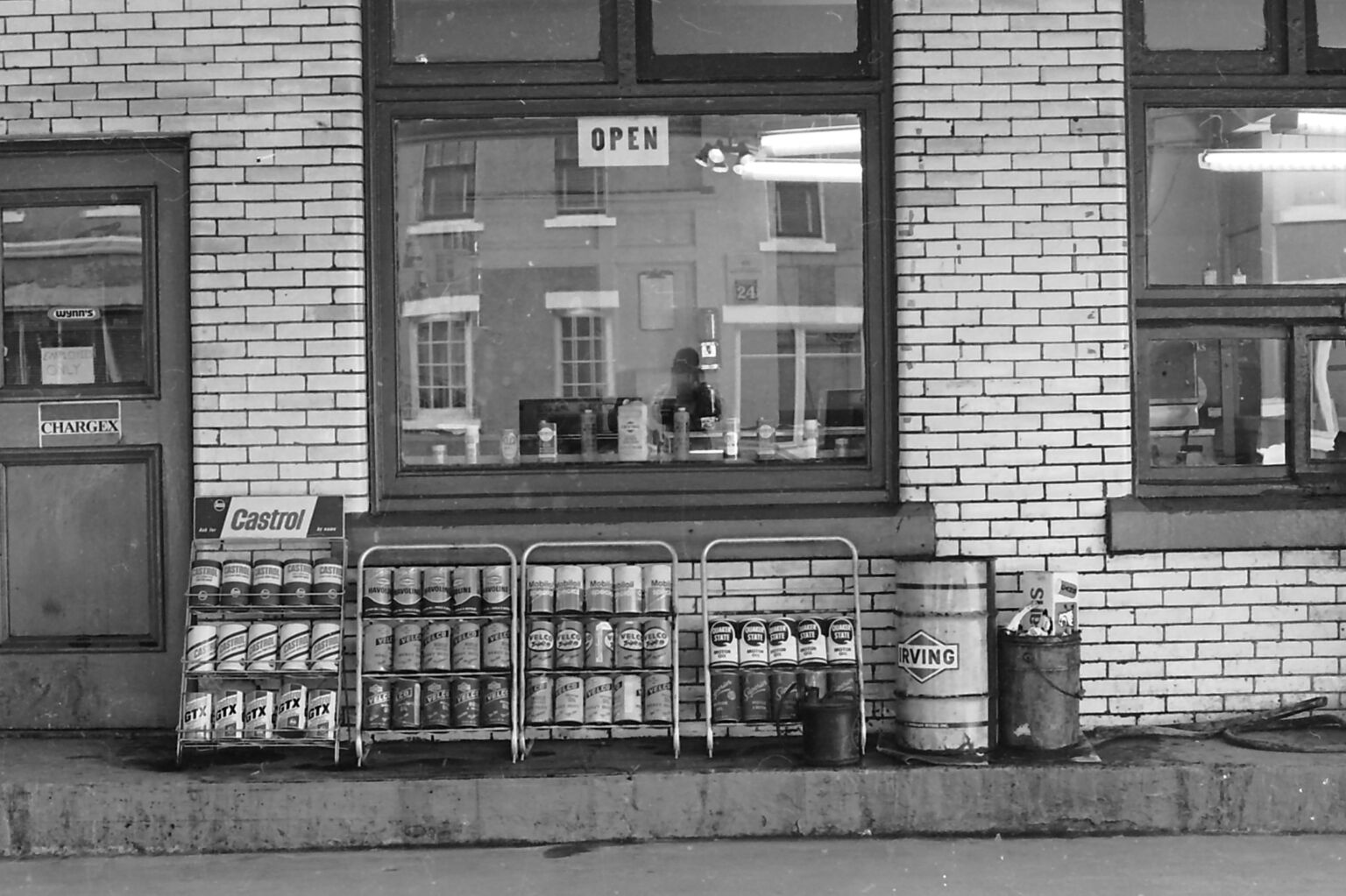 Further along Argyle was the tiny office for Maple Leaf Taxi, offering “sight seeing.” In the 1980s this housed a tiny, popular sandwich shop. 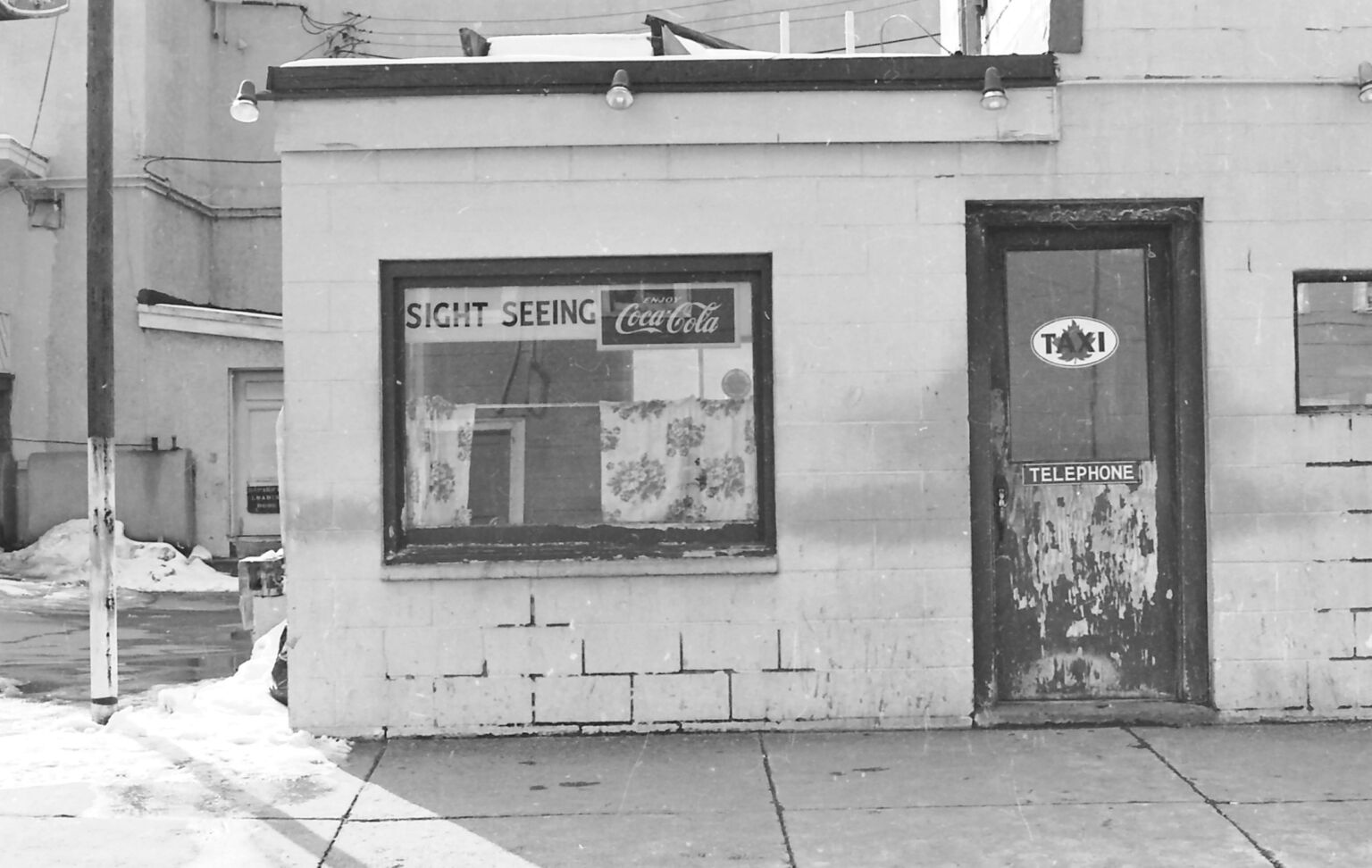 Snack bars were also plentiful. Here are a couple of shots taken through windows on a Sunday morning when the businesses were closed. 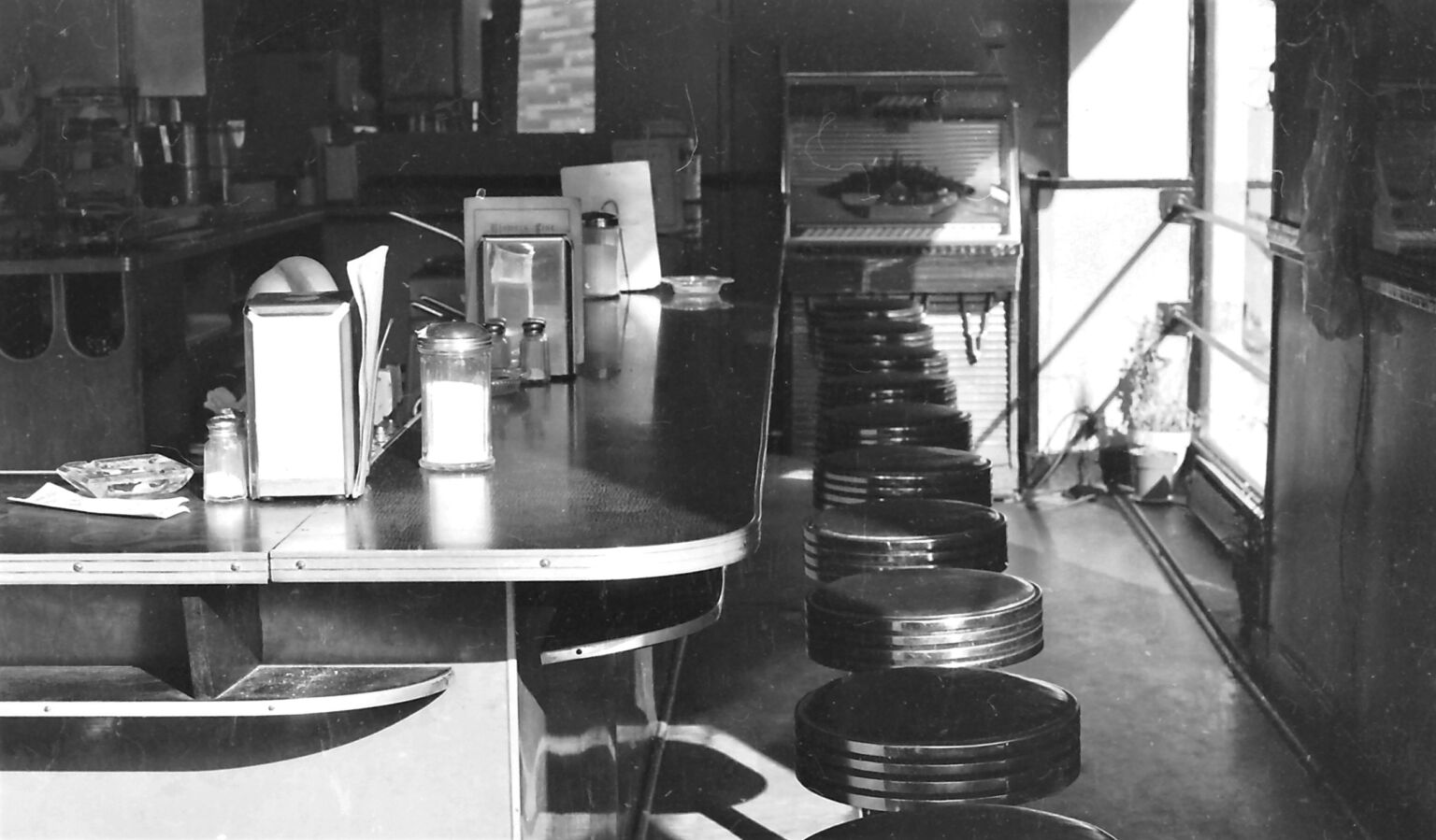 The menu suggests this place was on Grafton Street. What a lot of sugar in that dispenser. Occasionally you would observe sugar-coated flies that had crept into the sweet hereafter. 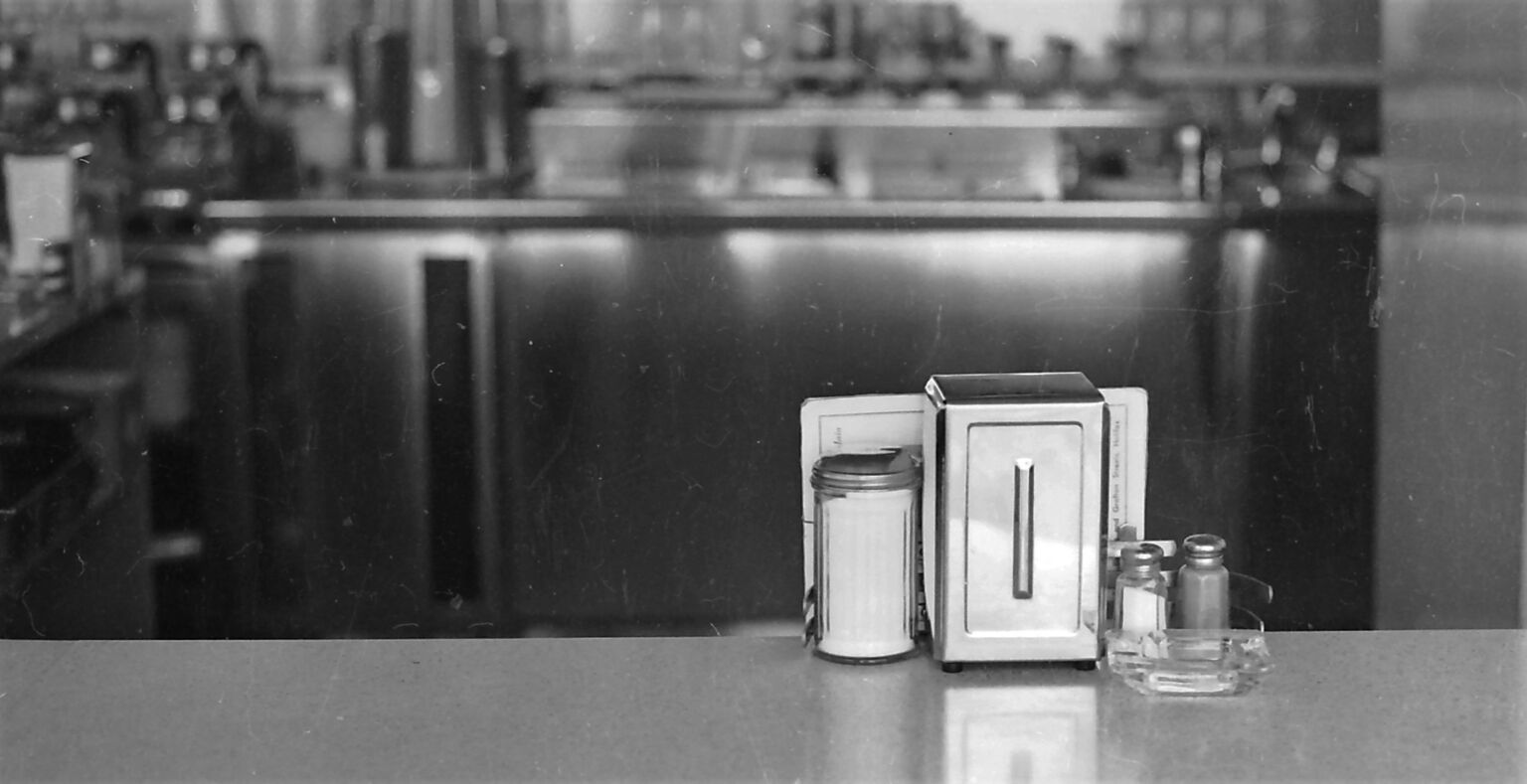 A favourite stop in Windsor was an old, wooden coal shed on the waterfront. I was besotted with this giant ampersand in a sign that read “Coal & Oil.” 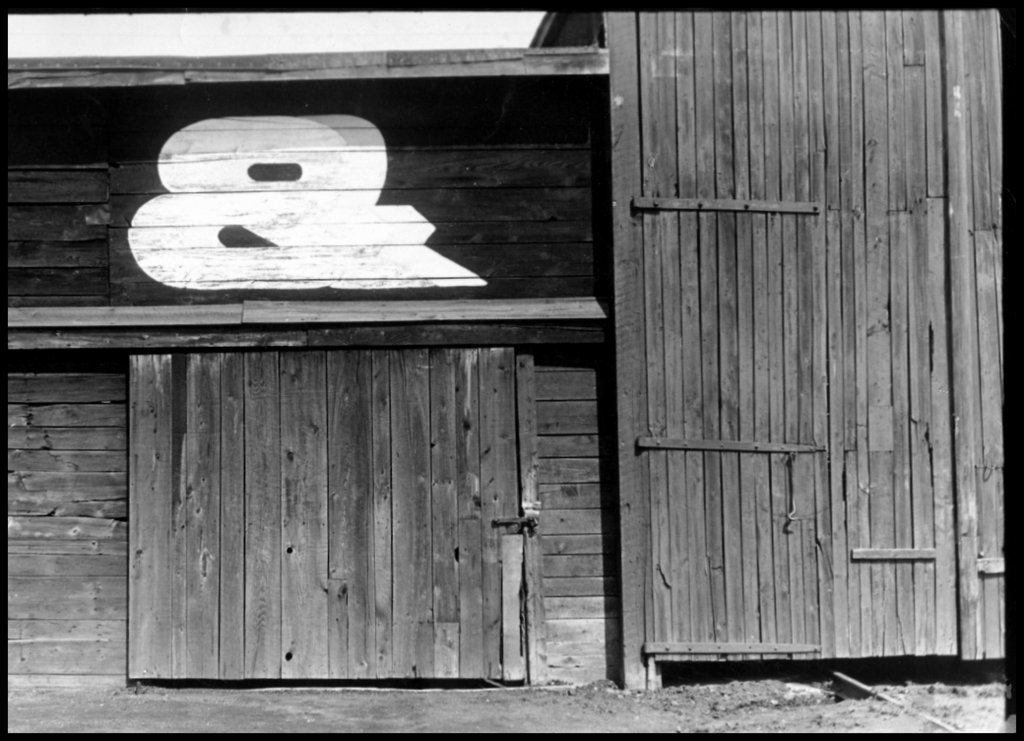 More or less in the same location today is this Tim’s, where I do not stop. Google views can be so delightful, I wonder why I bother leaving the house. 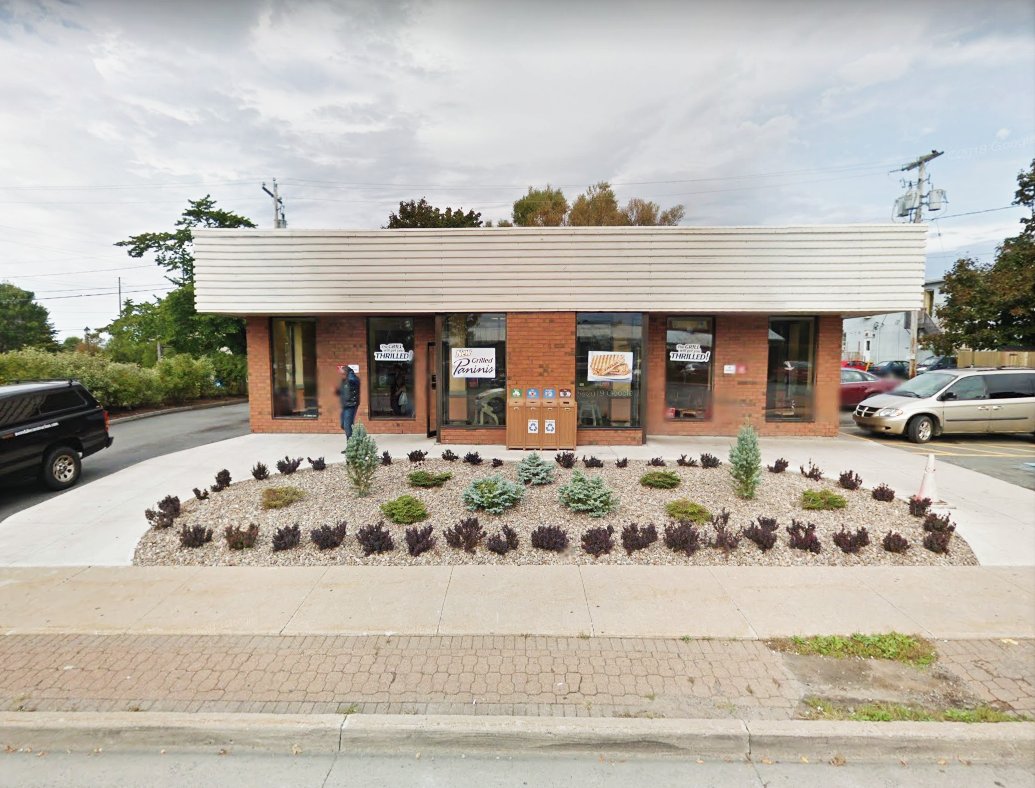 This call to action was on a Cabot Trail restaurant; Cape North in the summer of 1969, I believe. 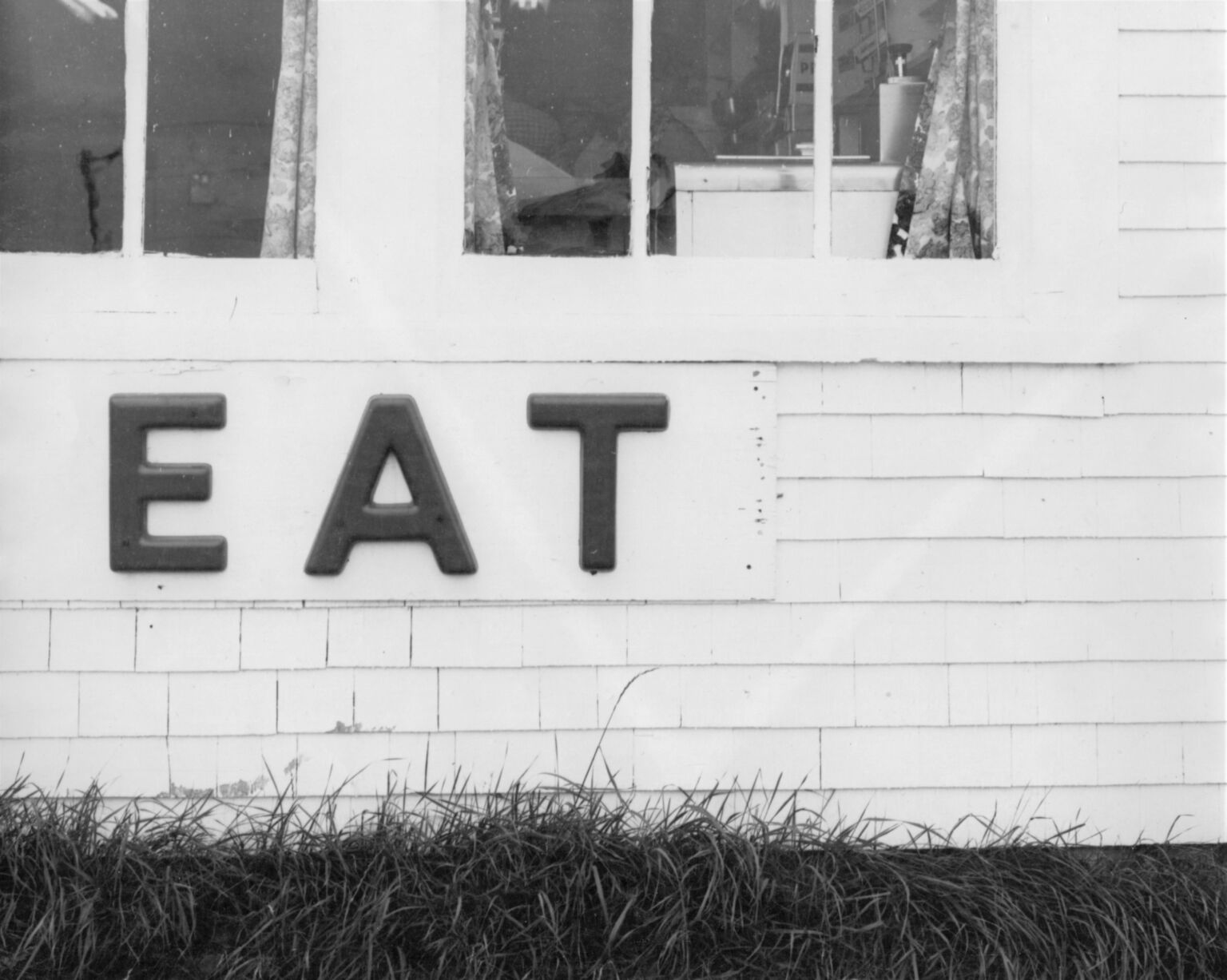 As proof that this style of photography was considered artistic at the time I offer the announcement for the Attitudes Towards Photography exhibit, August 1971, in the Anna Leonowens Gallery. The show was curated by an acquaintance, Ian Murray, who invited me to show along with, mostly, NSCAD students like himself. 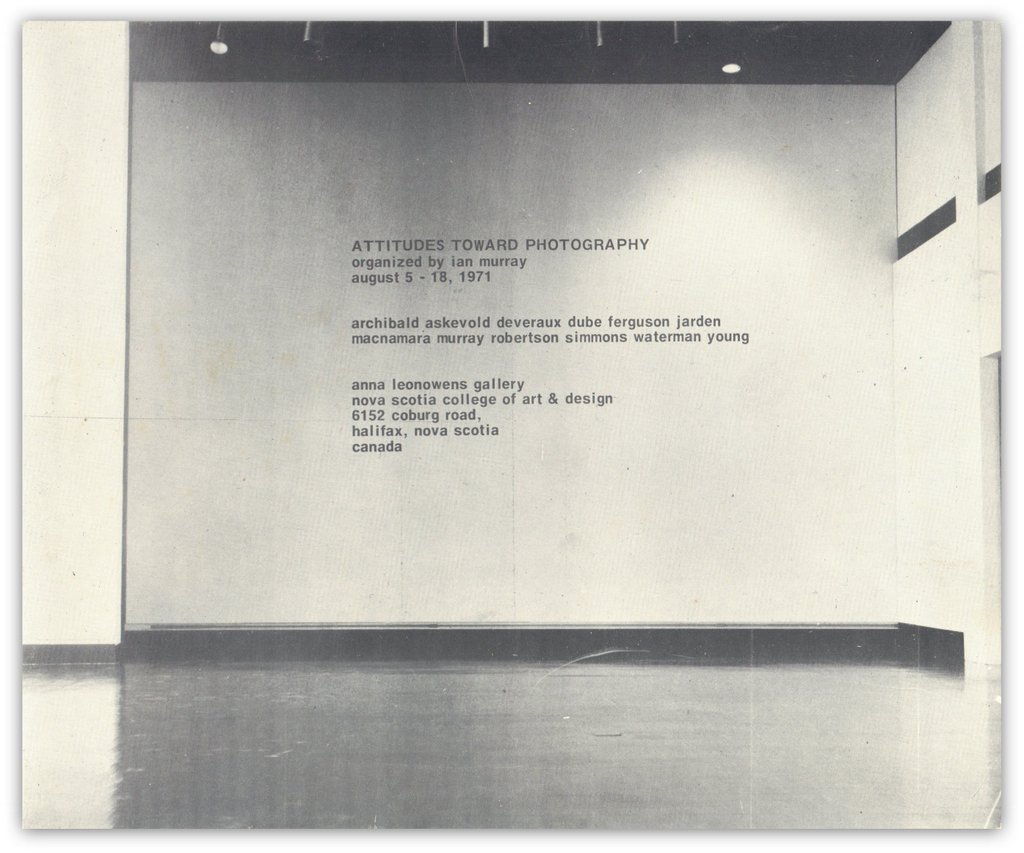 Images that Ian chose included cars in a Dalhousie parking lot, that is now the site of the Life Sciences Building. 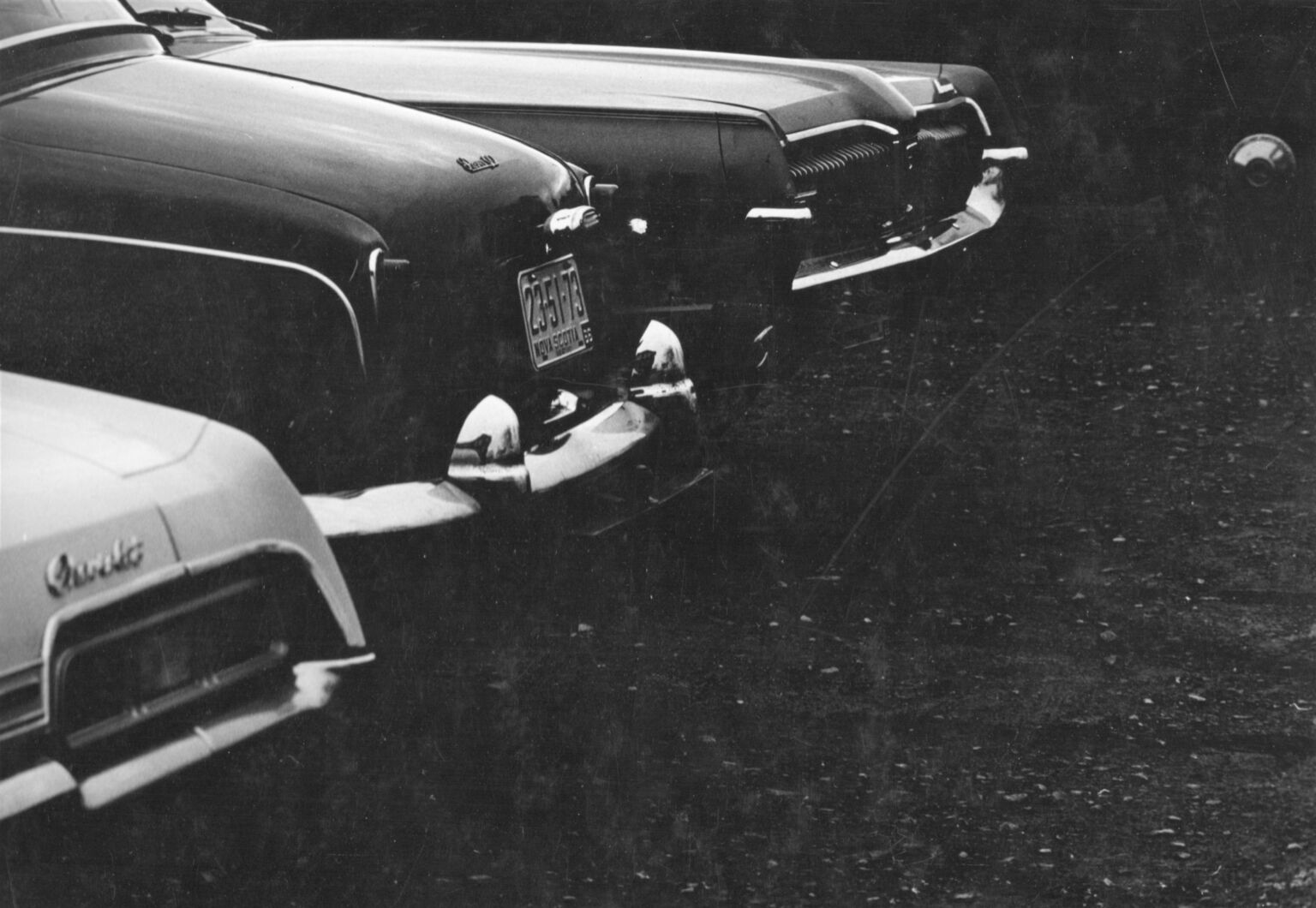 The exhibition had several of my shots of Rockhead Prison, located in the far north of the Halifax peninsula. All of my Rockhead images are in this blog post, and one is on permanent display in the window of the Rockhead wine store. 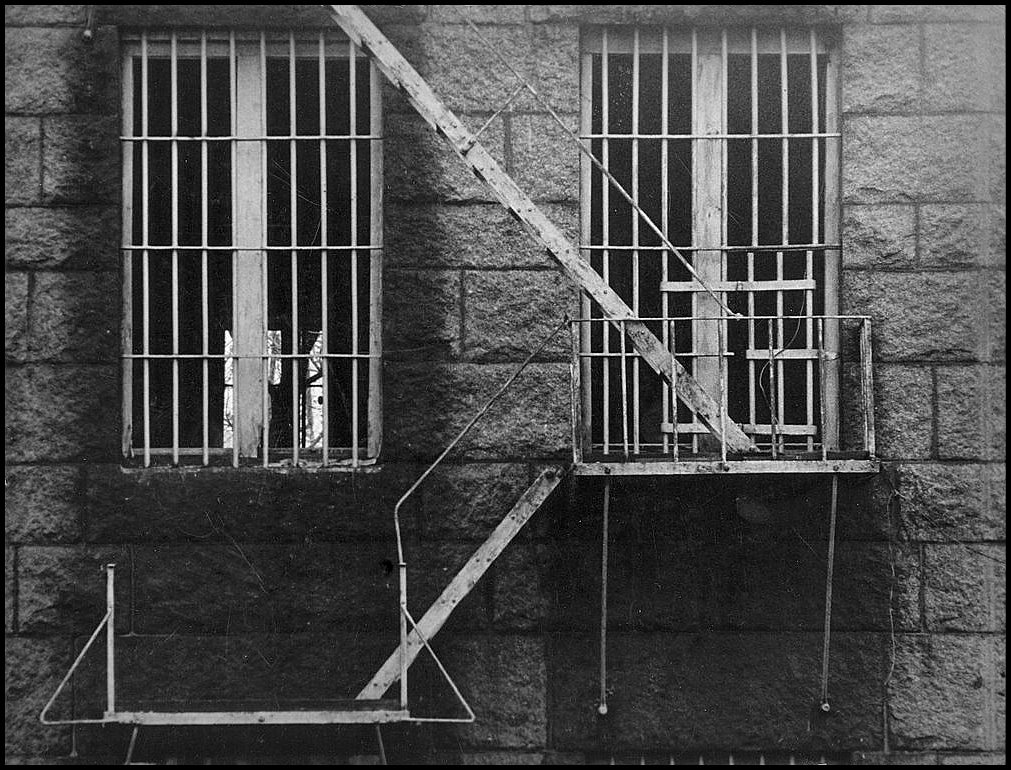