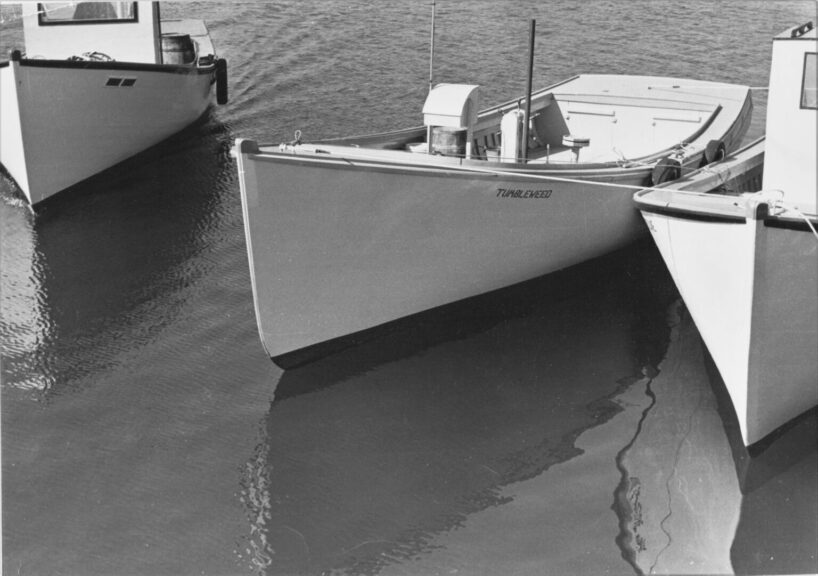 This is the eighth album drawn from my little collection of photos, arranged in more or less chronological order. These photos were taken about 1970 -75, and all over the province.

Let’s start with some landscapes.

A particularly Canadian feeling to this moment on a morning in January 1973.  A crew from the Sherbrooke Village project was dismantling an old barn, up the St Mary’s River in Glenelg, and I was there to record the process. A warming fire was started every morning and would be roaring by the time the school bus stopped at the crossroads. 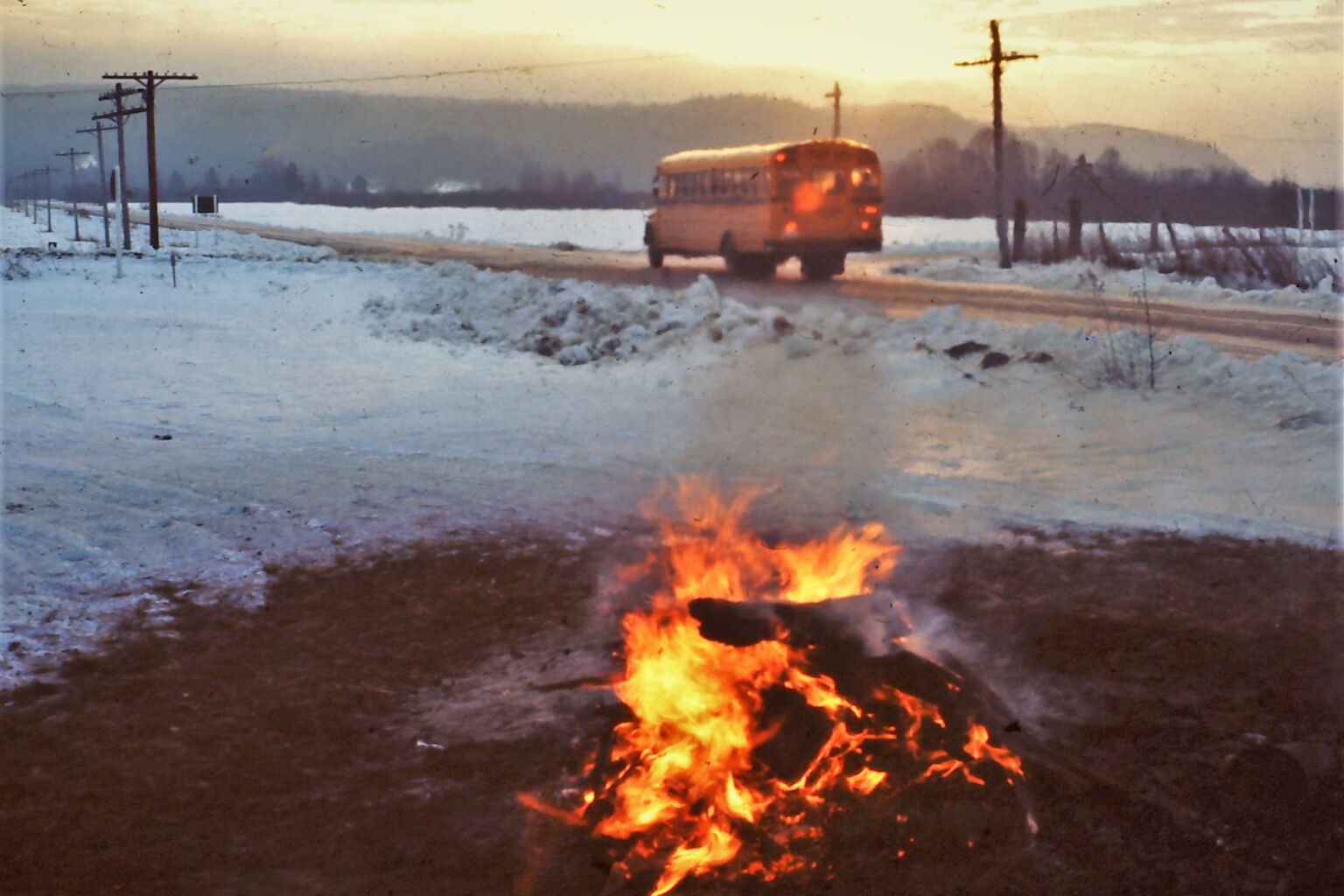 Compare that to a snowy morning in Halifax about 1975. The back of a picturesque Irving service station at the corner of Dresden Row and Sackville supports this billboard of travelers standing too close together. The Citadel, in the back, was fenced at that time because you never know when the French are going to try storming up the hill. 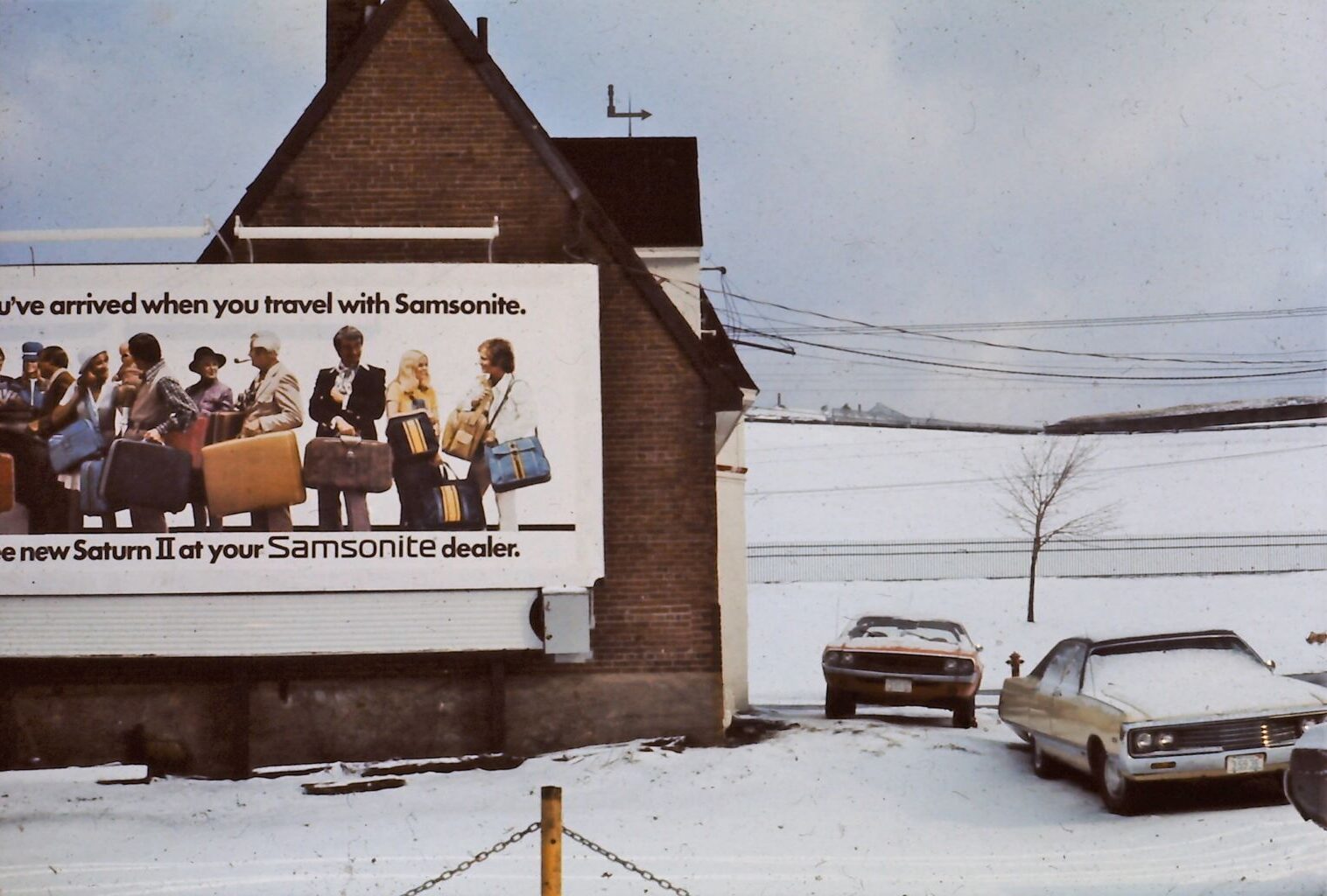 Those French the original Citadel was defending us against were in Louisbourg, seen here on a particularly sunny day in 1971. Of course that fog bank could roll in at any moment. This project feels unimaginably grand, both for the 18th century and for the 1960s. The features I was excavating were just behind the newly reconstructed buildings in the centre. Great summer jobs for me. 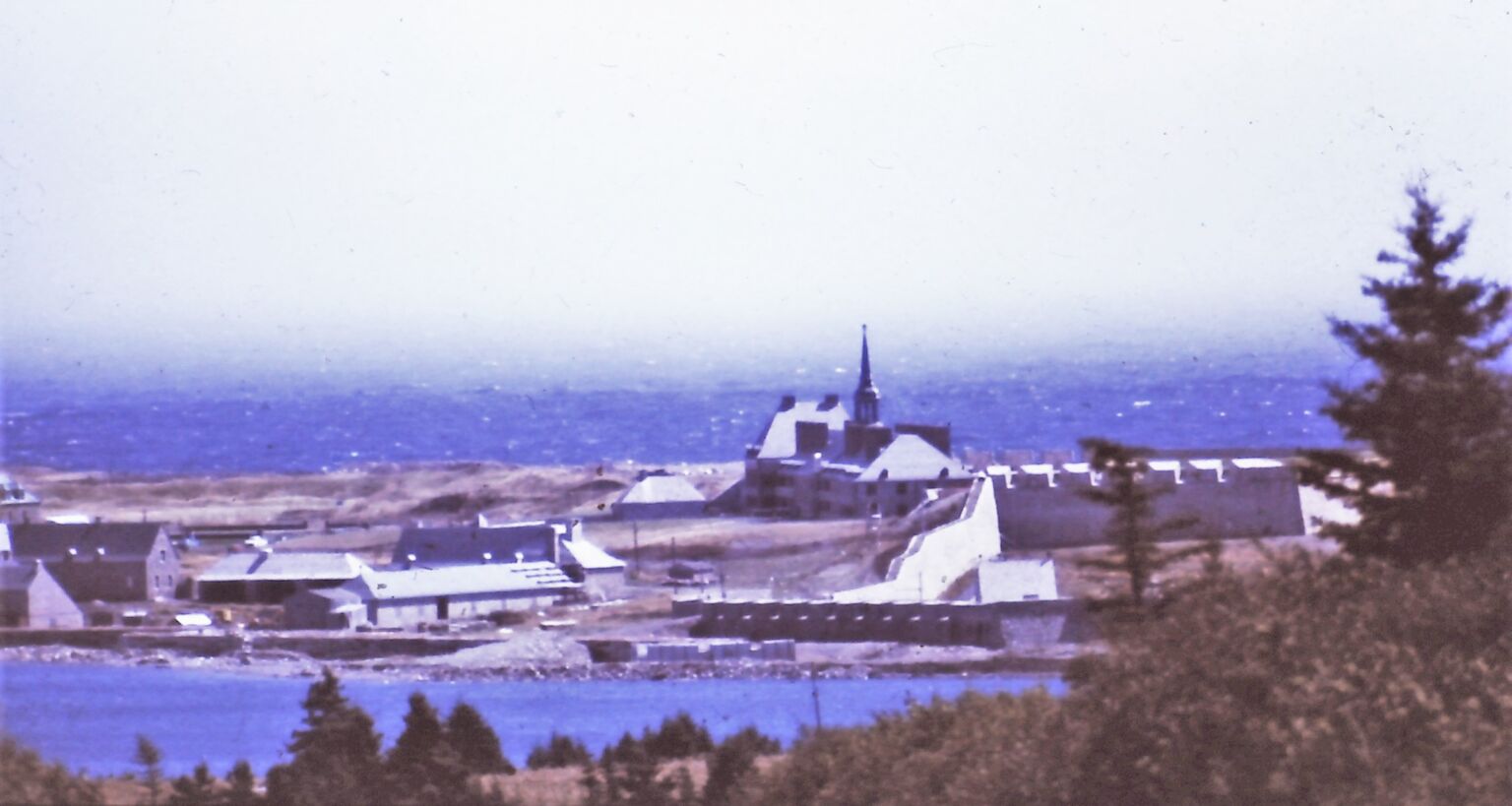 In 1970 or 71 the first reconstructed buildings were opened to the public.

Equally dramatic was a landscape of identical company houses approaching shore like lemmings, in Industrial Cape Breton c1970. One of the reasons for the Louisbourg project was to provide employment for folks as the coal mines closed. I was told there was one former miner working there by my time, 1969-71. 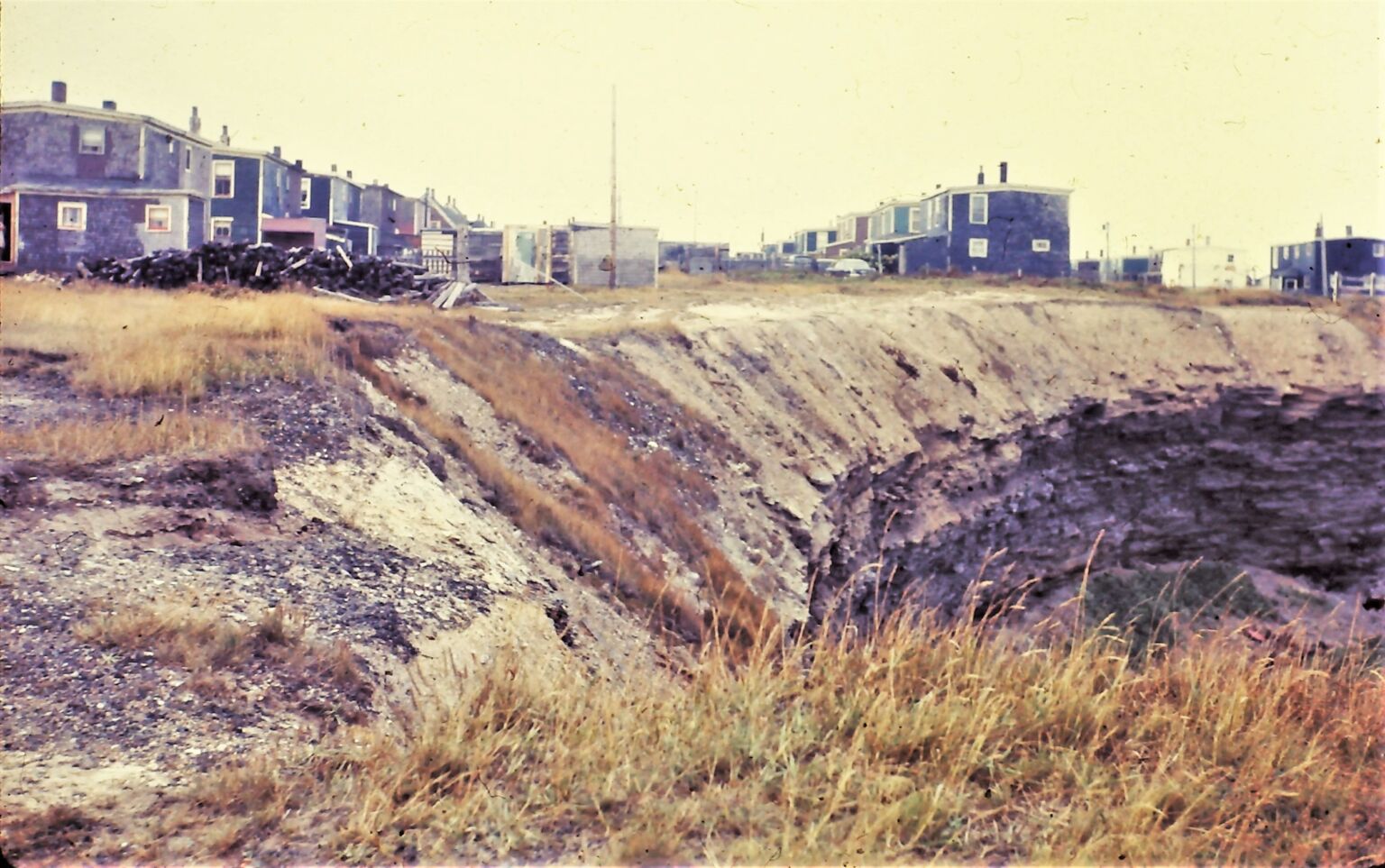 I think this may be Dominion.

From houses that all look the same to those that are all very different; here is Duncans Cove at about the same time. A spectacular landscape so close to Halifax, no wonder it attracted many residents from the creative classes.

It feels like the Chickenburger has always been there in Bedford. This view is from the early 1970s.  A vintage car helps distract your view from the surrounding wasteland. 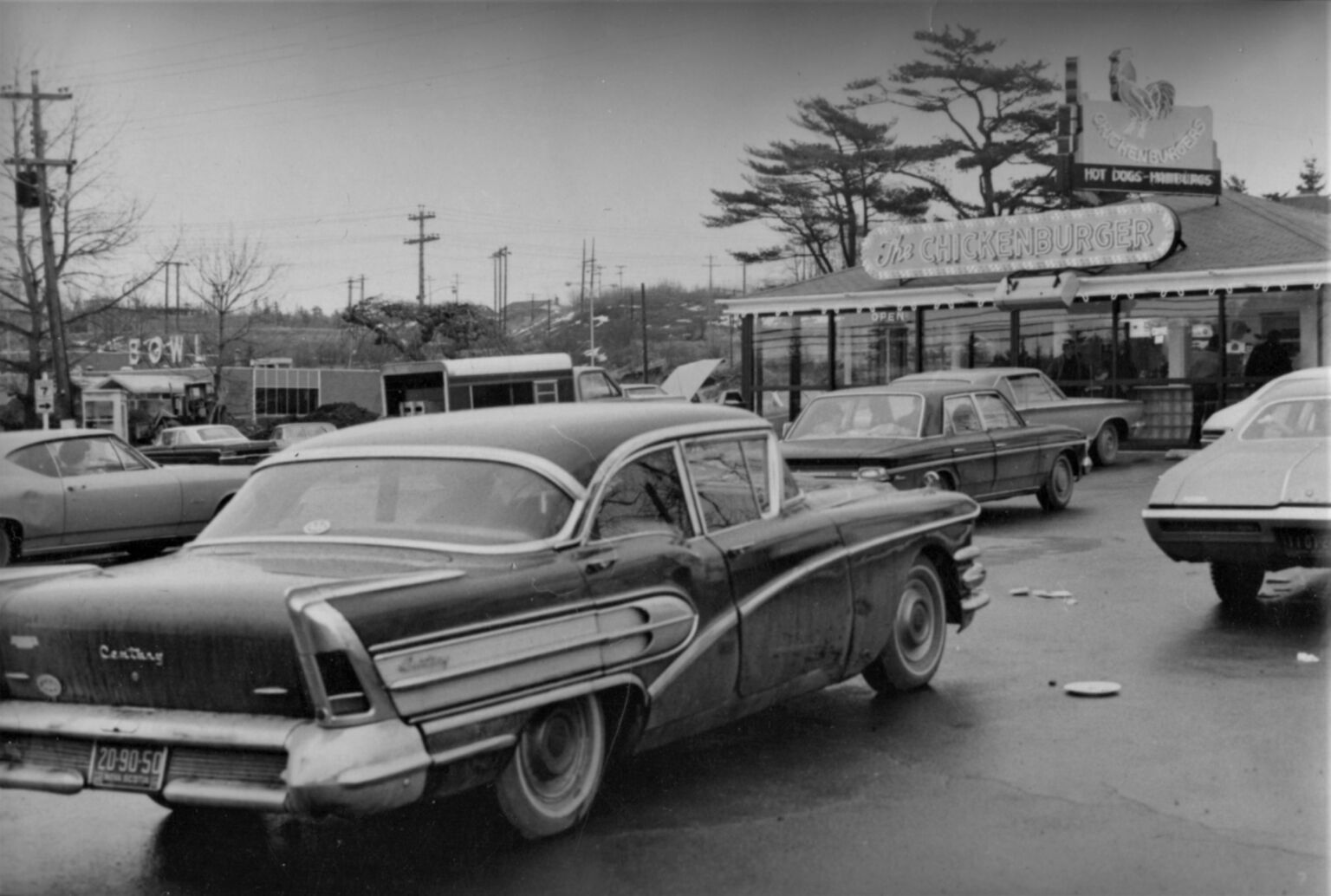 Isn’t this a perfect little store with gas pumps, I believe in the Issacs Harbour/Goldboro section of the Eastern Shore. 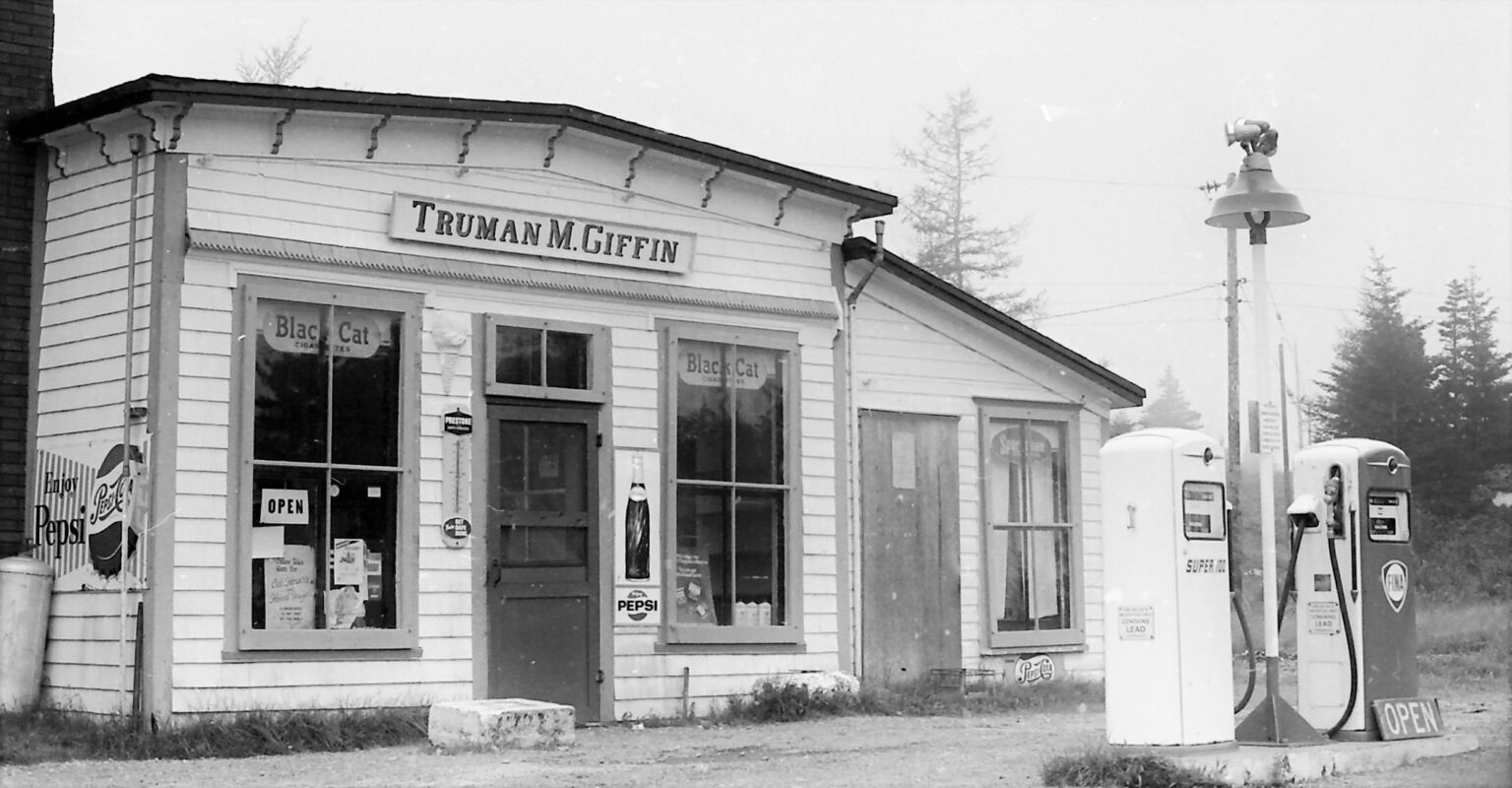 On the long drive back to Louisbourg after going to the movies in Sydney, this store and gas pump was always a spot of brightness. It was looking particularly Edward Hopper-ish on the night I stopped to try and capture the atmosphere. 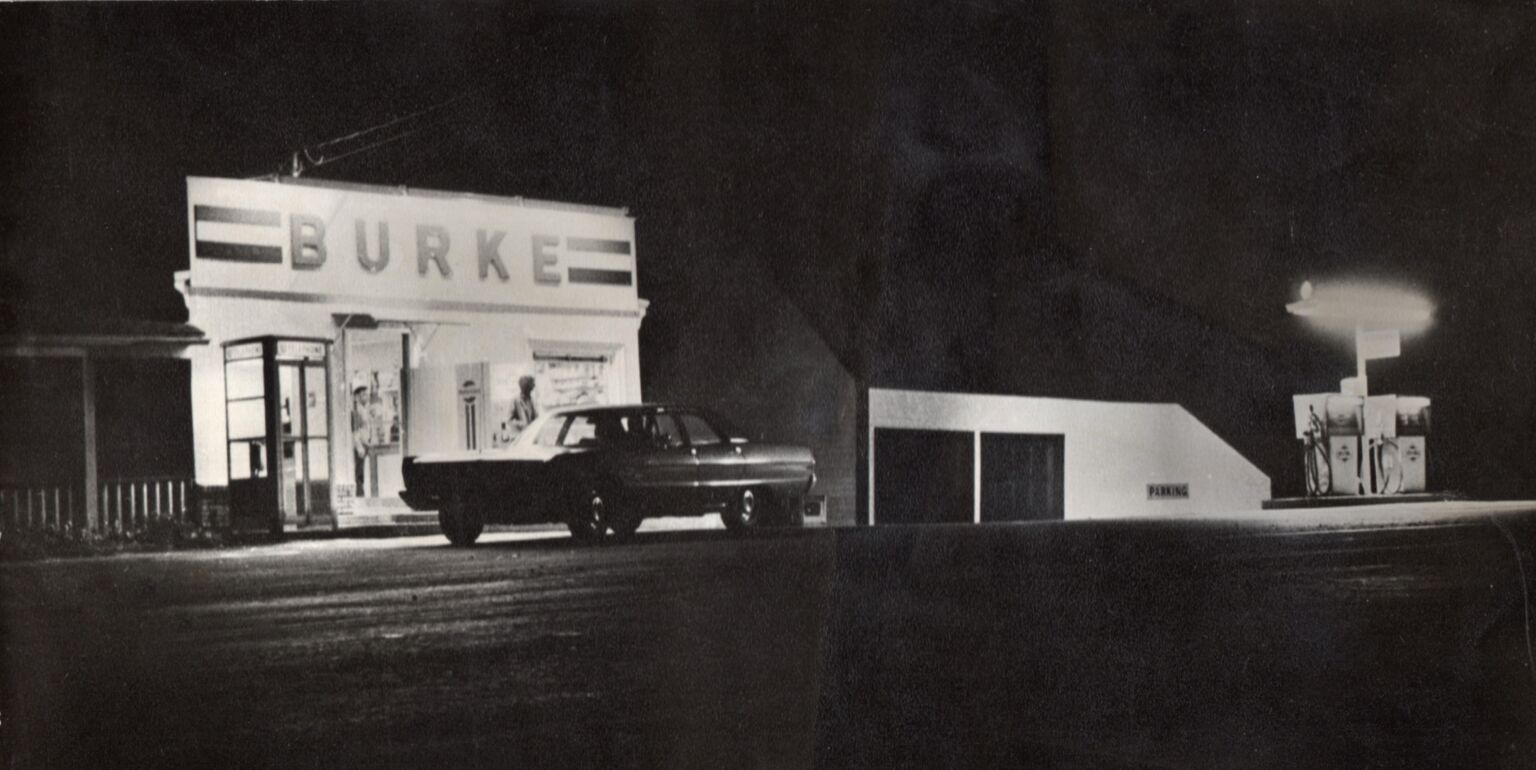 In 1971 Louisbourg this shop, where I bought groceries, had a perfect grid of handwritten signs filling a window: flour, beets, picnic ham, haddock fillets. And a display of fruit and vegetables outside, like a European grocer. 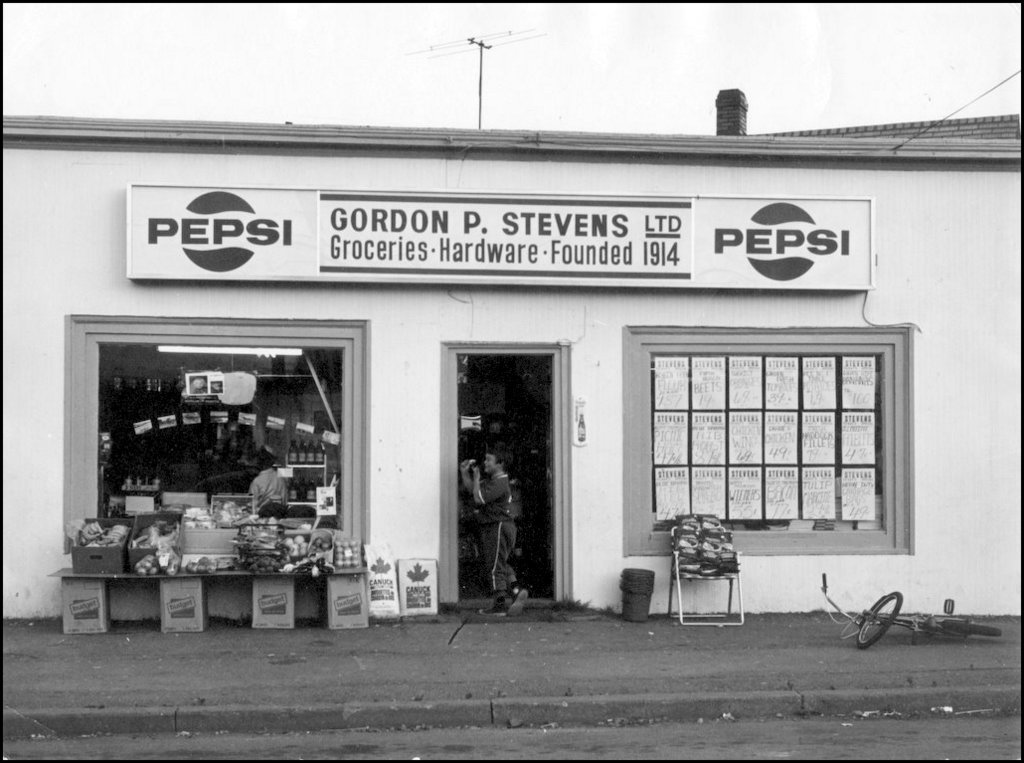 Early in my social media career I tweeted this photo to the young Gordon Stevens. My most successful Twitter ever.

This shop + shed in Fox Harbour, Cumberland County has the massing and balance of solids and voids that contemporary architects strive to achieve. It anticipated, by several decades, development nearby at Fox Harb’r Resort. 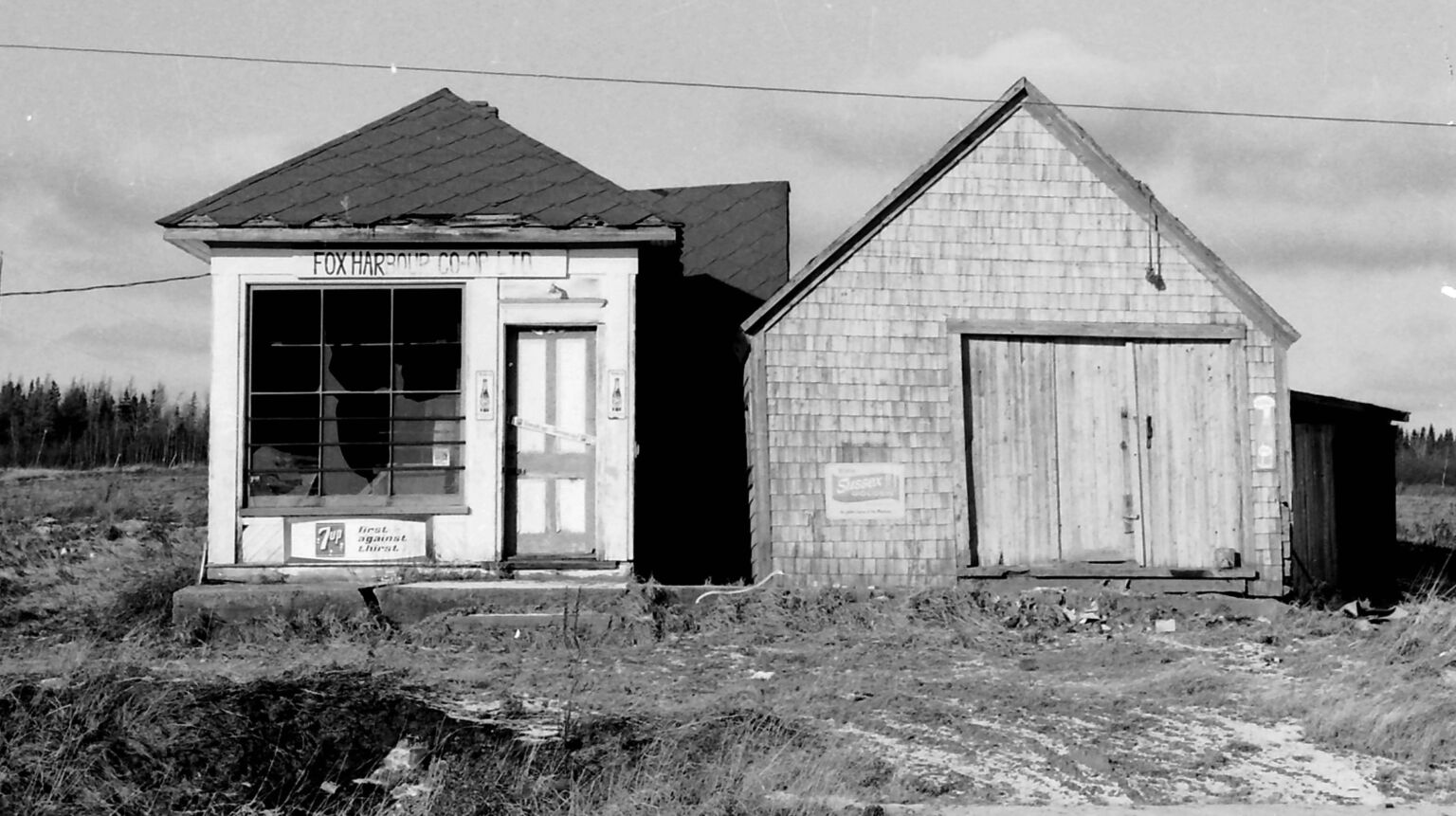 A collection of gable ends in Lakeville, in the centre of the Annapolis Valley, would always make me smile. Eventually I stopped to take a picture. In the late 60s and early 70s “Love” painted on a building was still a refreshing thought. 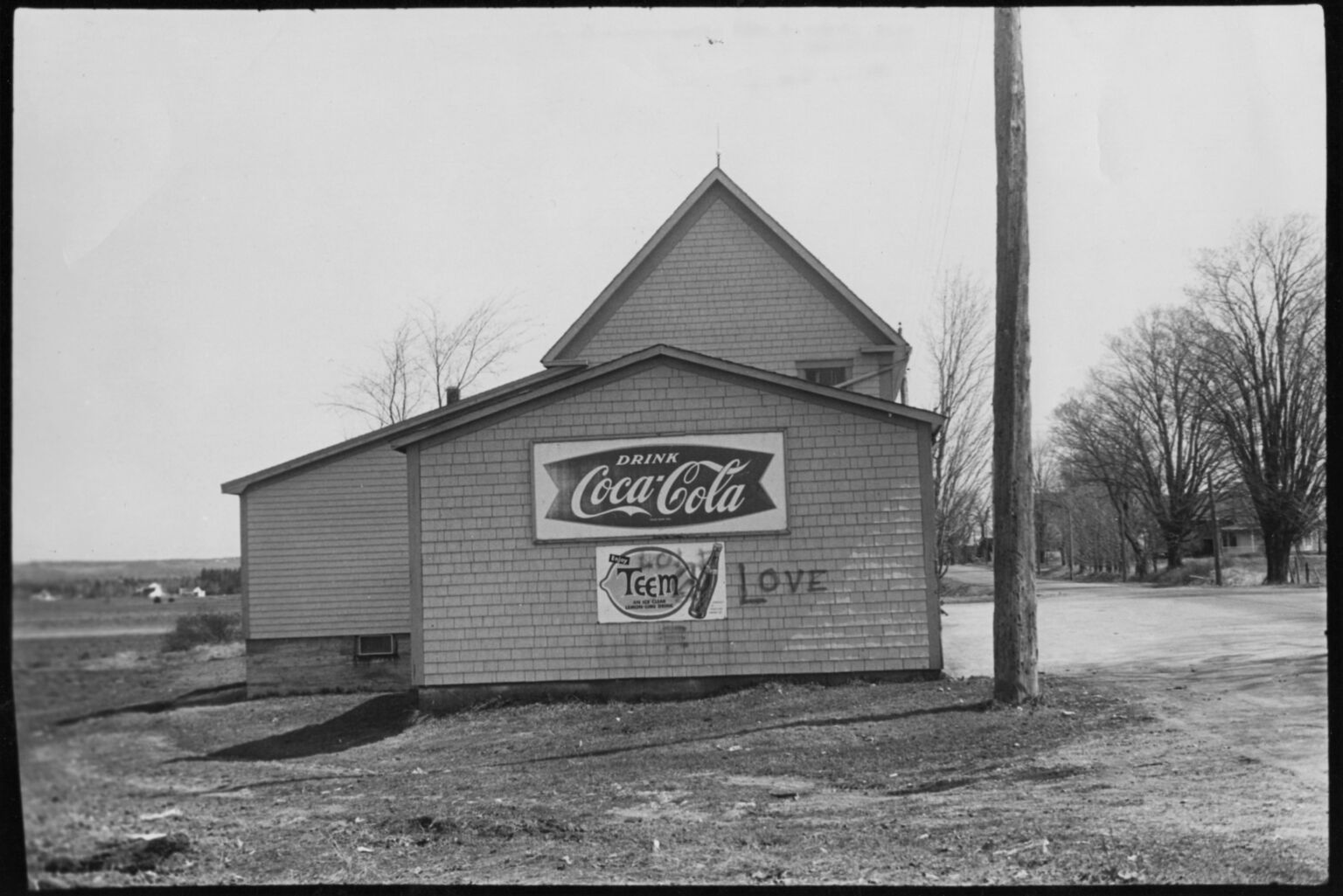 A delightful cascade of gables on a movie theatre in industrial Cape Breton, 1973. Imagine the children’s squeals at the Saturday matinee. 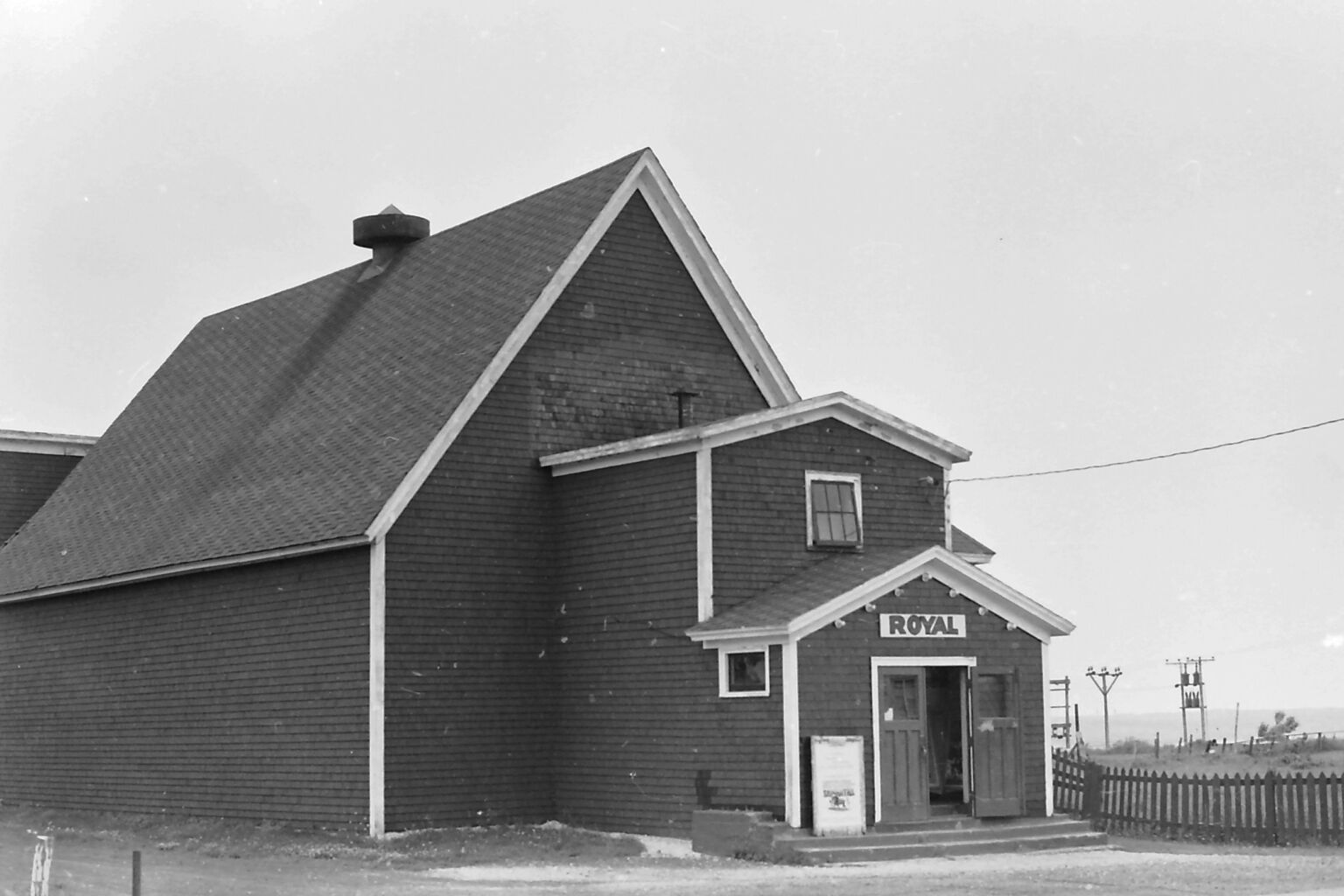 A collection of architectural forms on one of the steep streets of Bear River, 1974. The community used to be branded as the “Switzerland of Nova Scotia.” 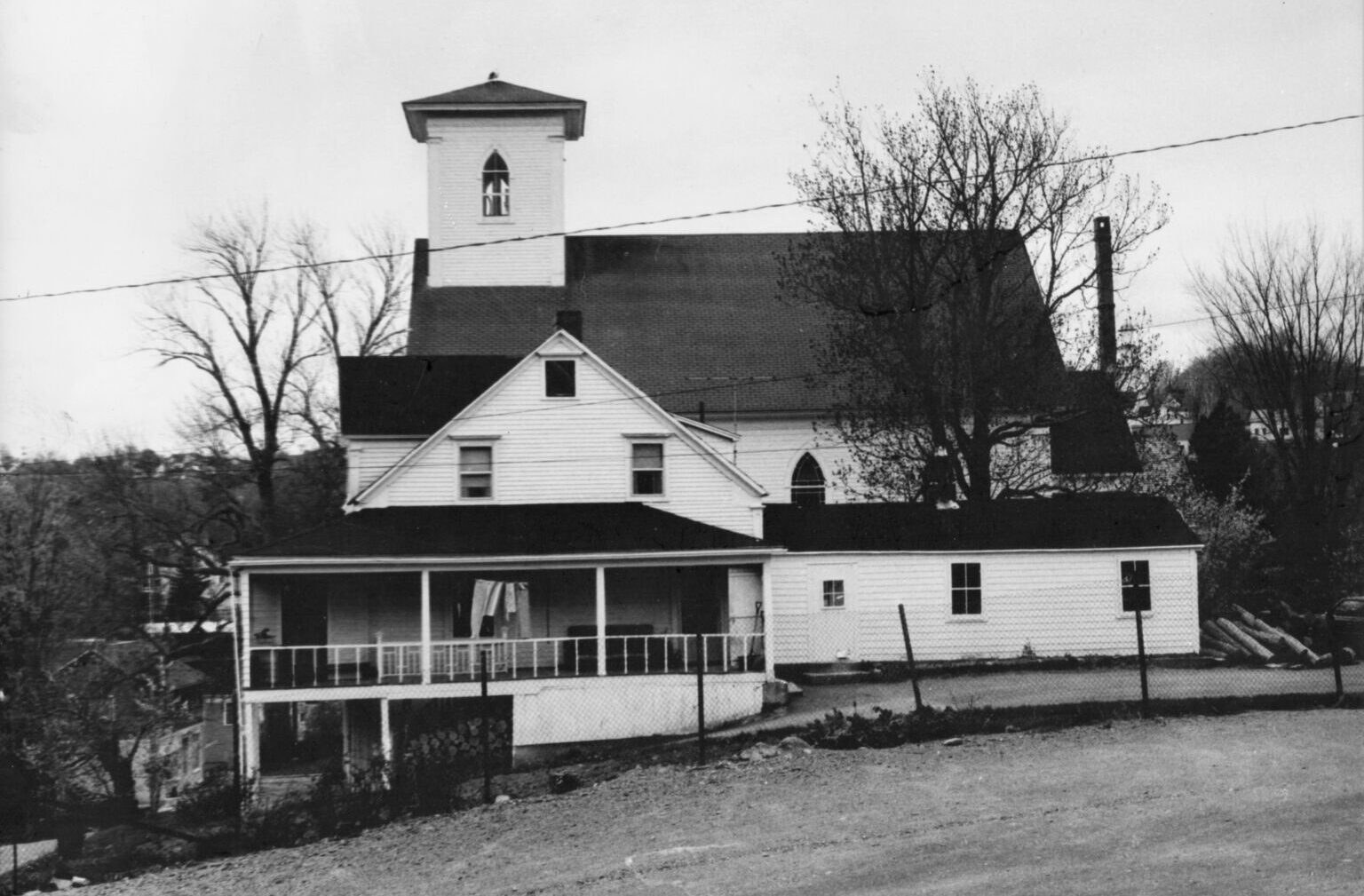 On a 1973 visit to the government wharf in Port Bickerton, I noticed that all the fishing vessels had a hooked mat in front of the wheel. A charming piece of domestic labour decorating an industrial workplace. And Scottie dogs. 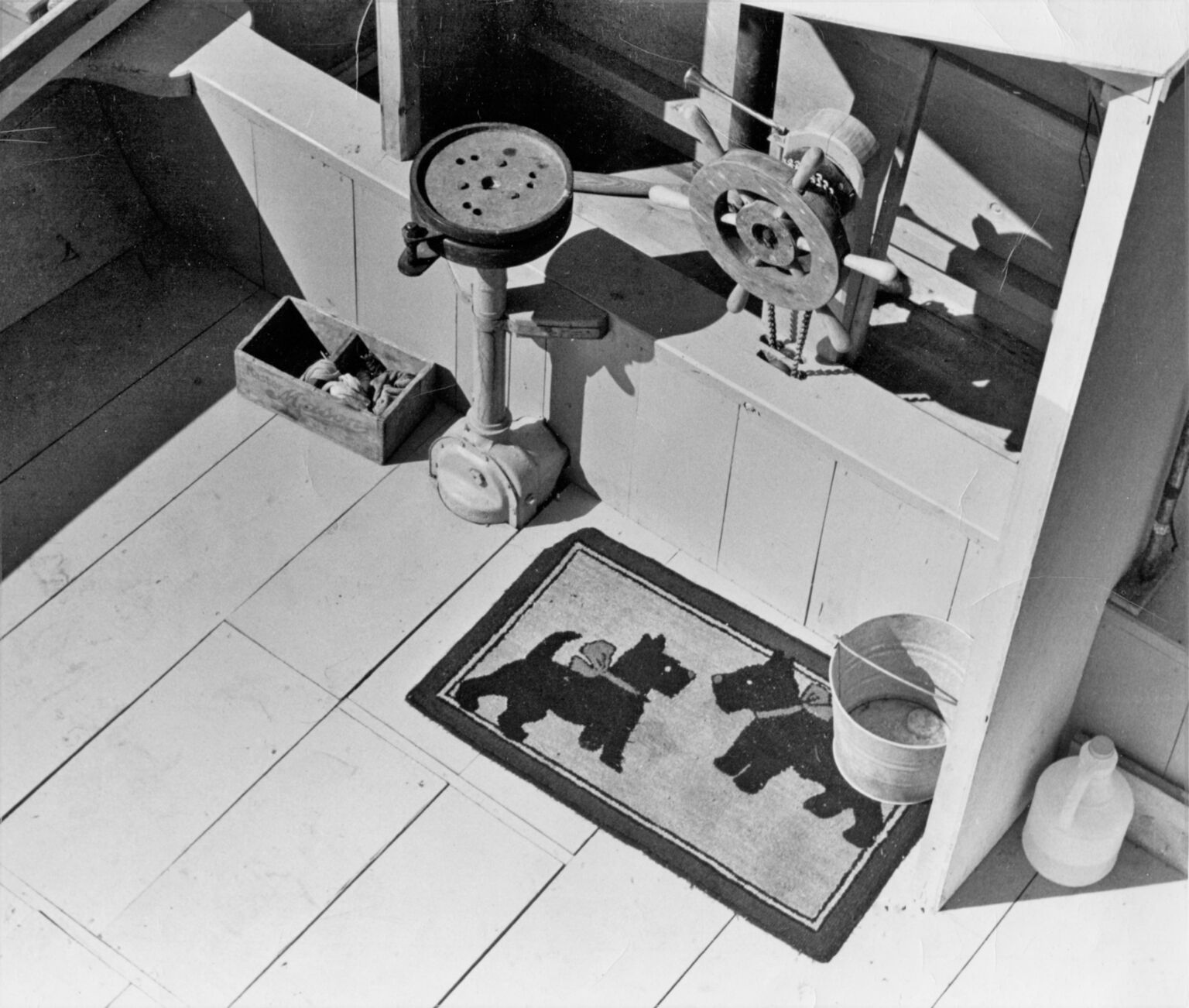 An abandoned house in the Valley had its door wide open. 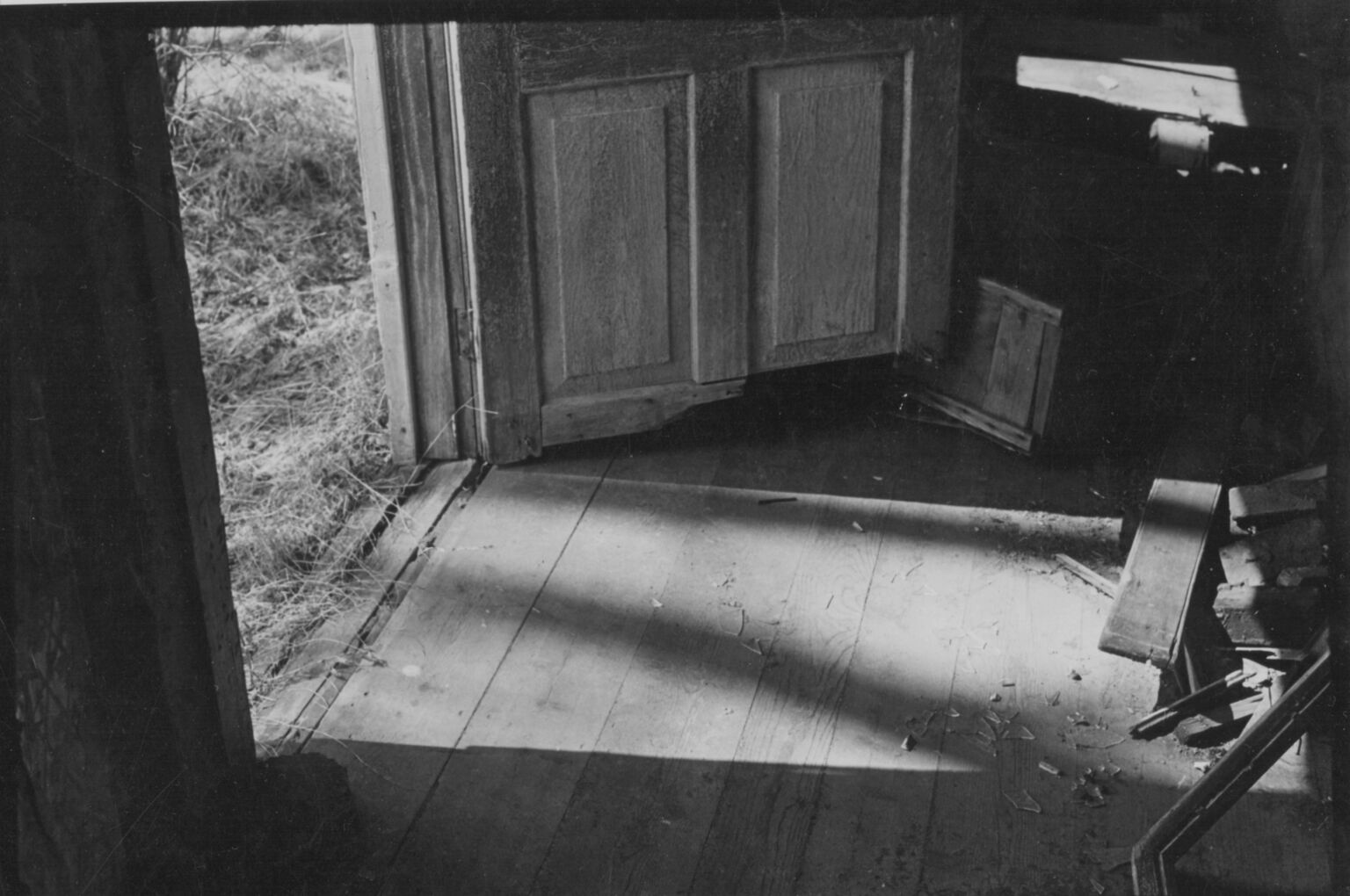 This ruin of a stone house was on the Inverness side of Cape Breton, I don’t recall the exact location, but it was prominent. The second story hearth, made of three slabs of cut sandstone, feels both modern and ancient. 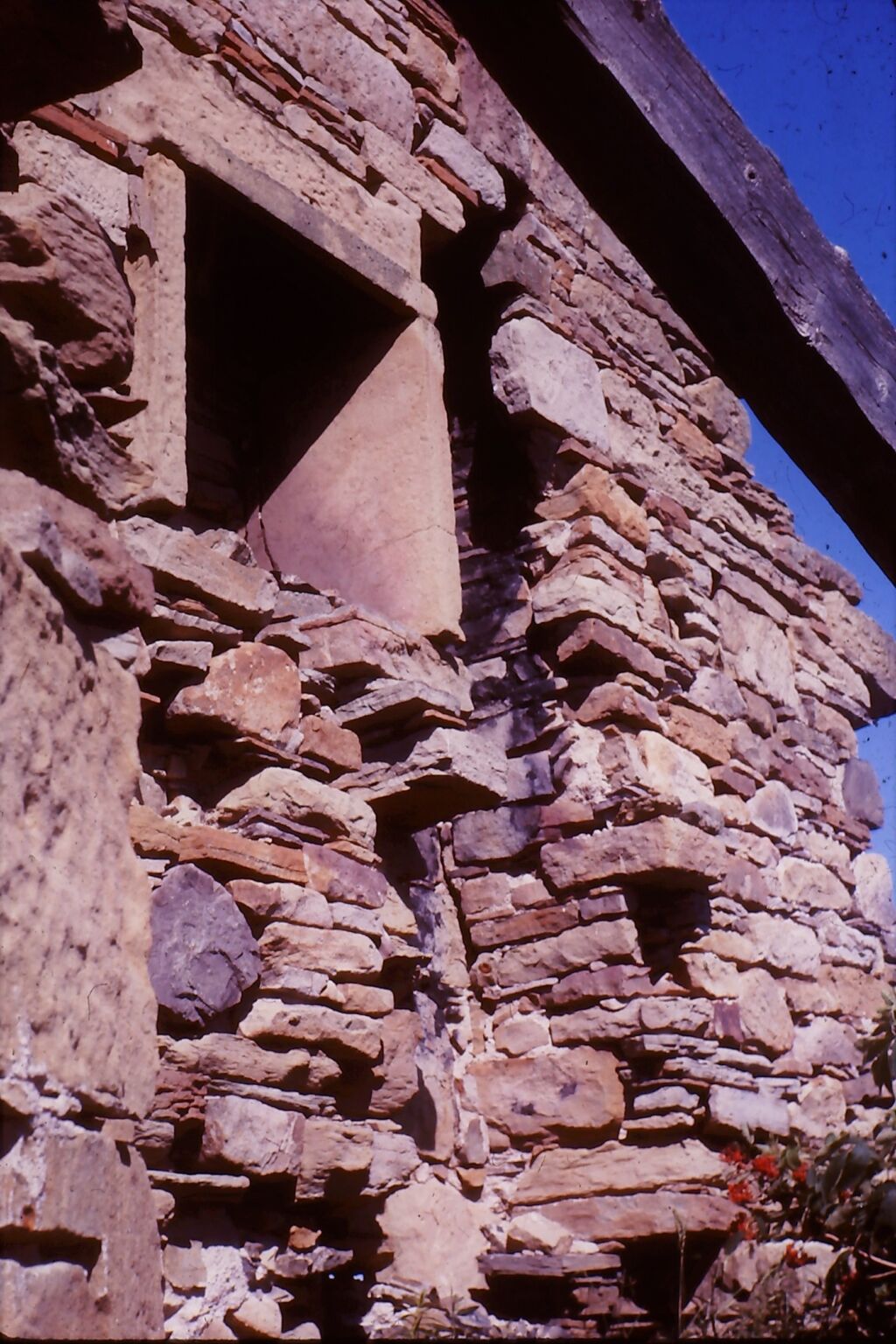 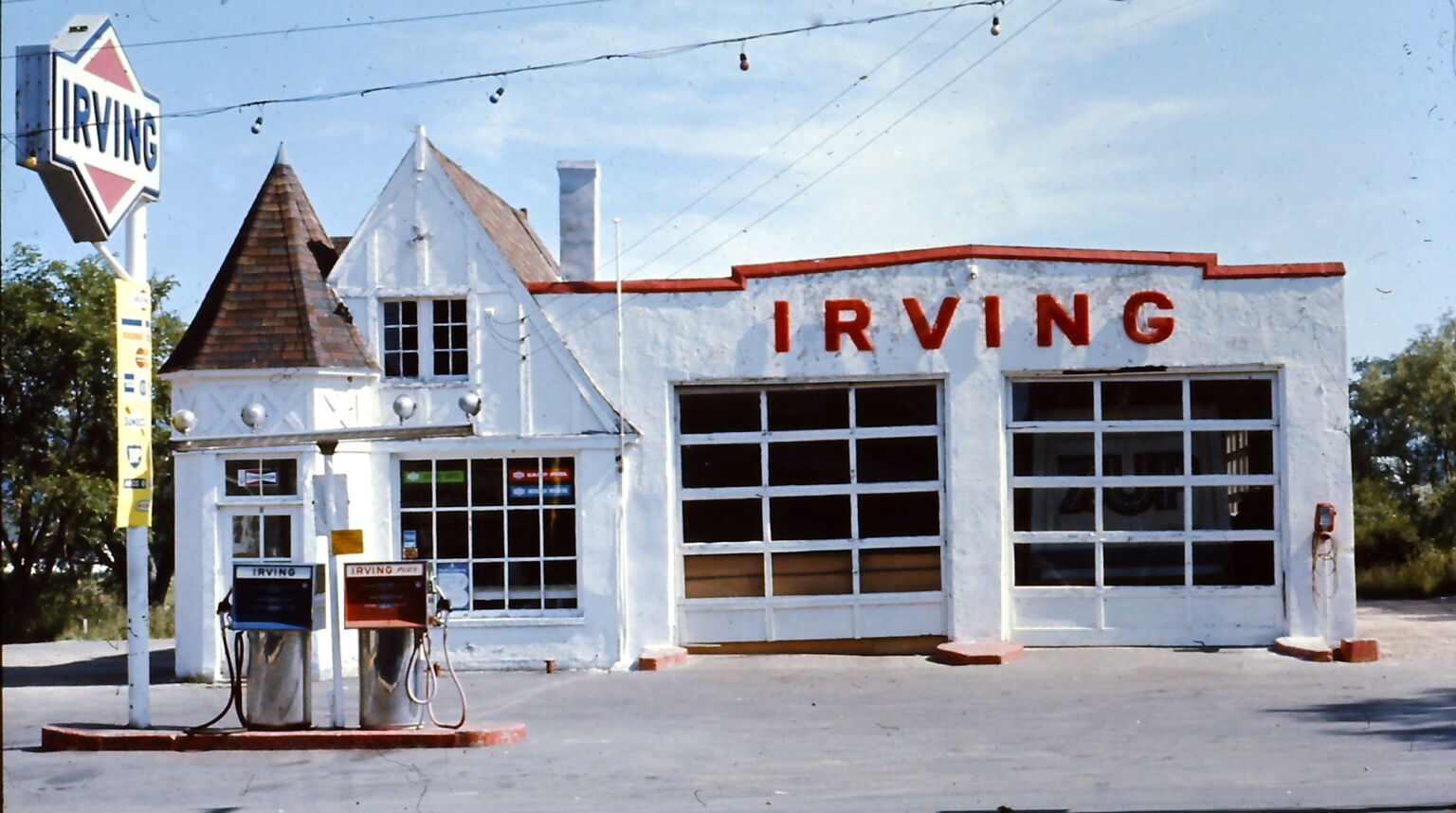 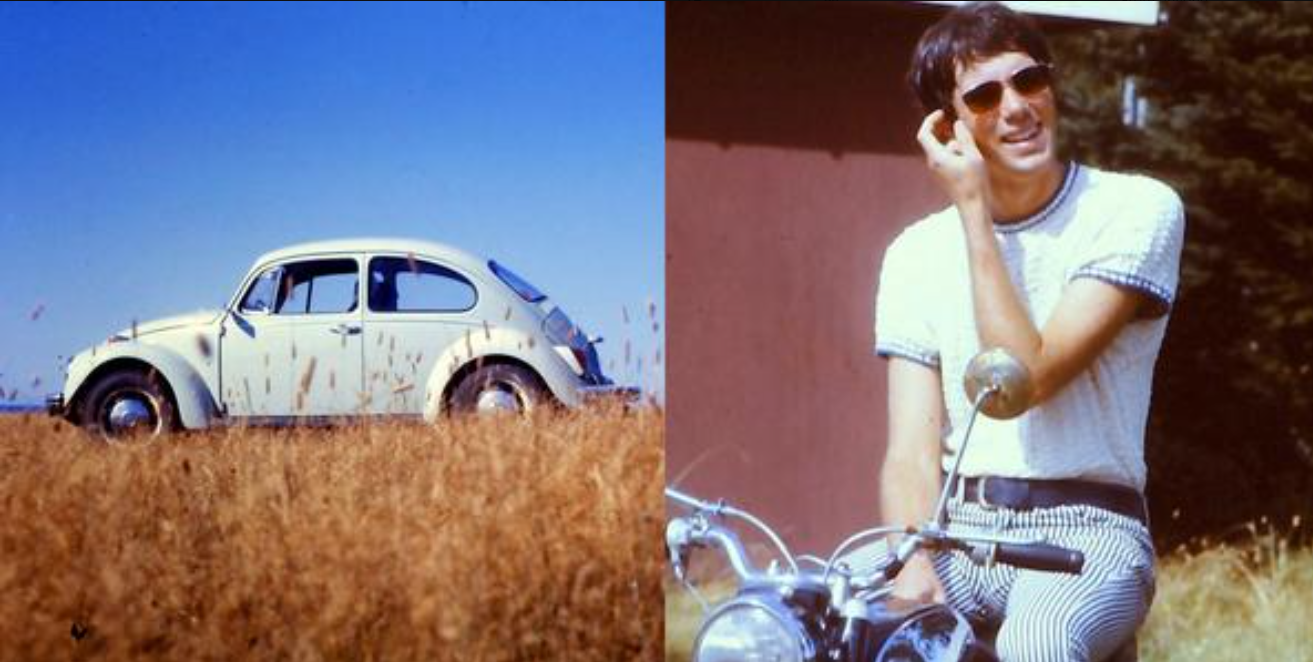