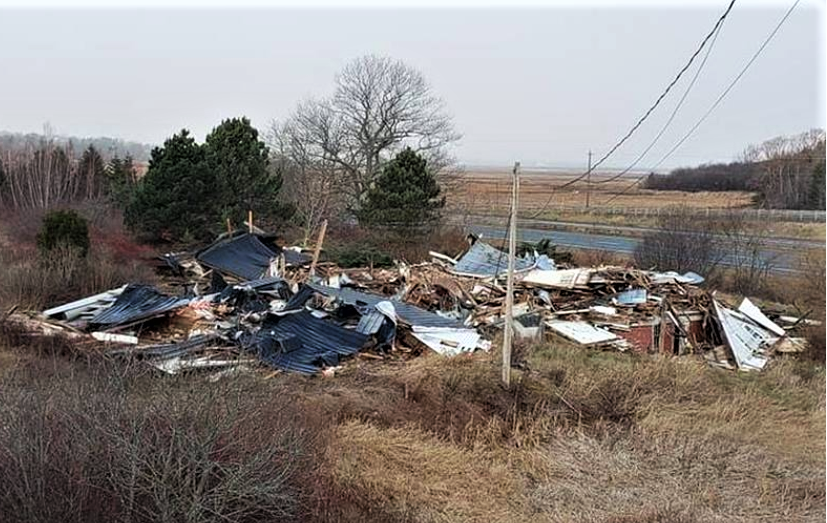 On Sunday December 6, a house and its outbuildings near Avonport were demolished. The destruction was a shock to the community, and to the provincial government who since 1993 had the buildings registered and protected as a Heritage Property. I have a few thoughts.

The premises will be well known and fondly remembered by tens of thousands of people who travel on the 101. As you sped towards Halifax, the house was outstanding, just before the Avonport overpass at exit 9,

Because the property was so visually connected to the highways, Google streetview provides the photos of the site.

It was not a surprise to learn that parts of the home probably dated back to the 1760s, and that during the 19th century it was a stage coach inn. Even at 110 kilometers an hour the buildings radiated an aura of antiquity and welcome.

From the overpass it was clear that the house had acquired several additions over time. A cupola on the carriage house increased the charm of the compound, and trees partially screened the four lane divided highway from view.

Oh what a feeling

The house took authority from its place in a cultural landscape that dates back to the earliest periods of European settlement. Most houses show their backside to the big highway, but this one confidently exposed its charms to the road. In my mind it had an emotional impact similar to THE tree, near Shubenacadie, which is also experienced as a high-speed drive by. Imagine how you would feel if this beloved oak was suddenly removed. It was that feeling. 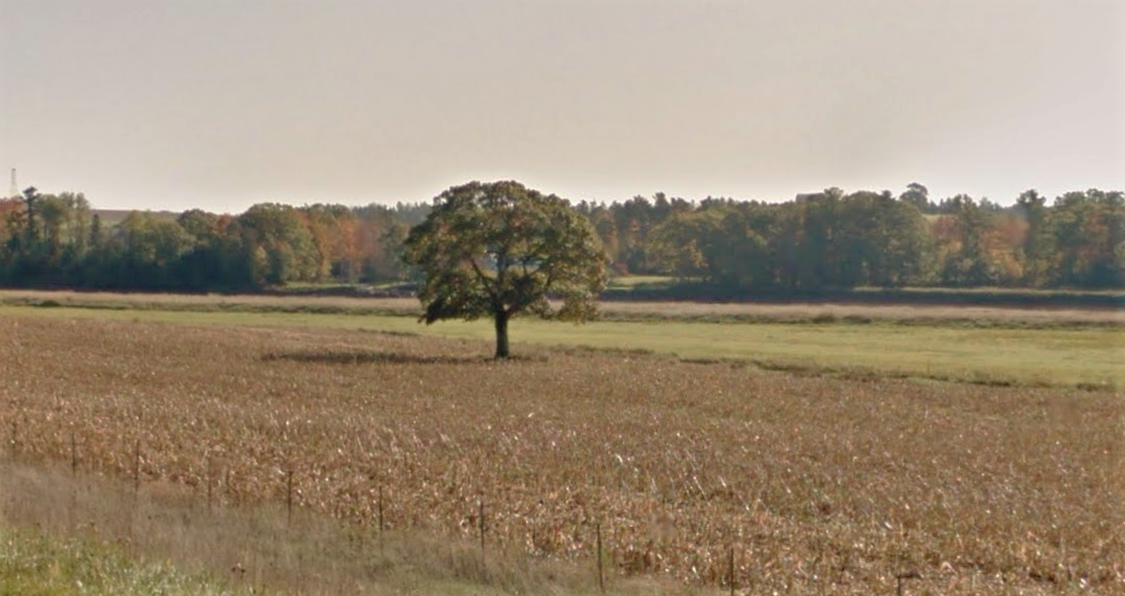 As you drive to the Annapolis Valley what a delight to come over the crest and see Blomidon in the distance, with the bay and agricultural lands in between. A British visitor, Captain William Moorsom, called this “the finest view in Nova Scotia” in his 1830 guide to the province. He produced an illustration to prove his point. The demolished house was at the base of this hill and around Moorsom’s time it became an inn, offering hospitality to travelers like him. 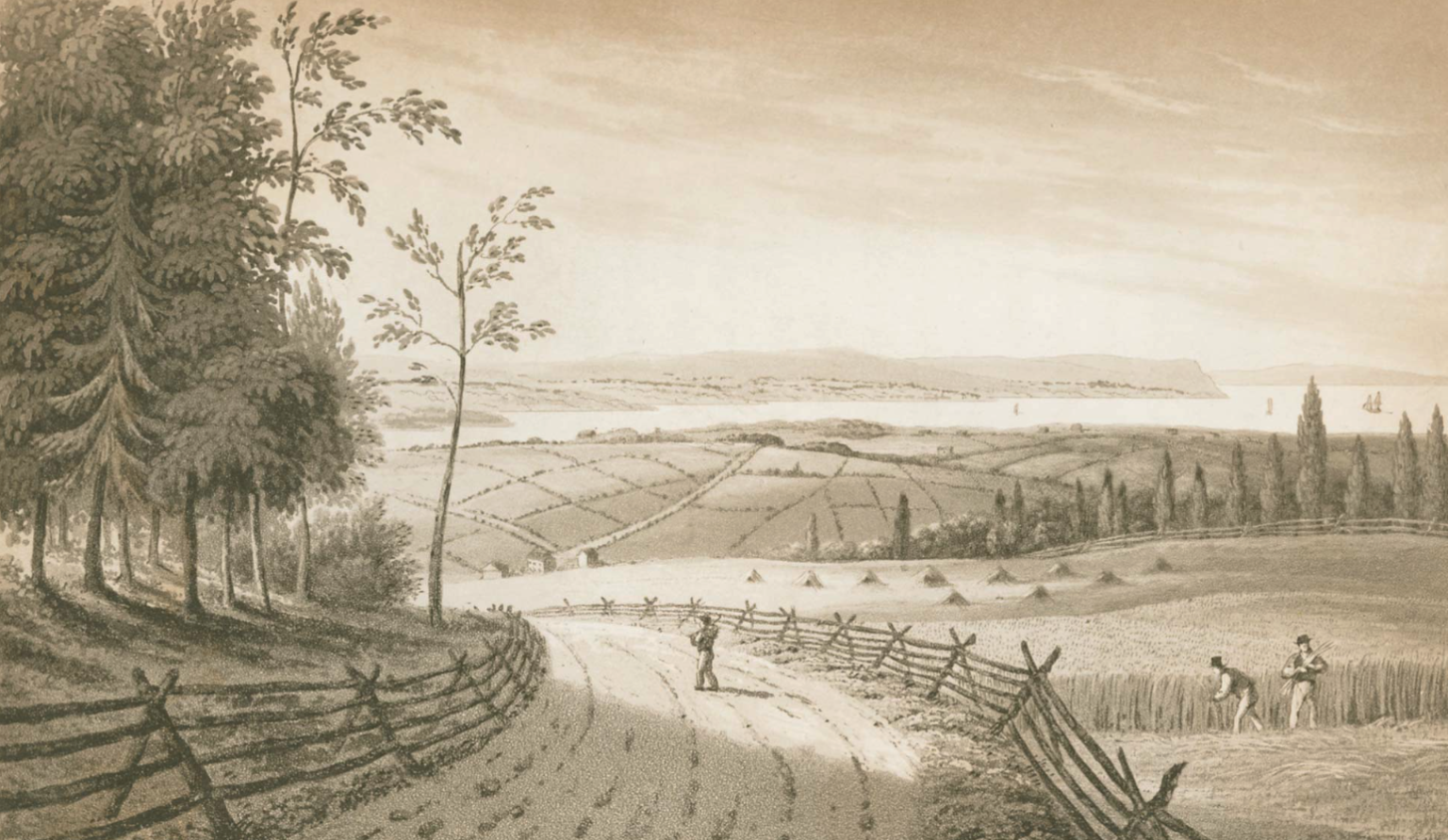 I’m reminded of the boiling frog metaphor when I look at how our lifestyle choices have changed that view. 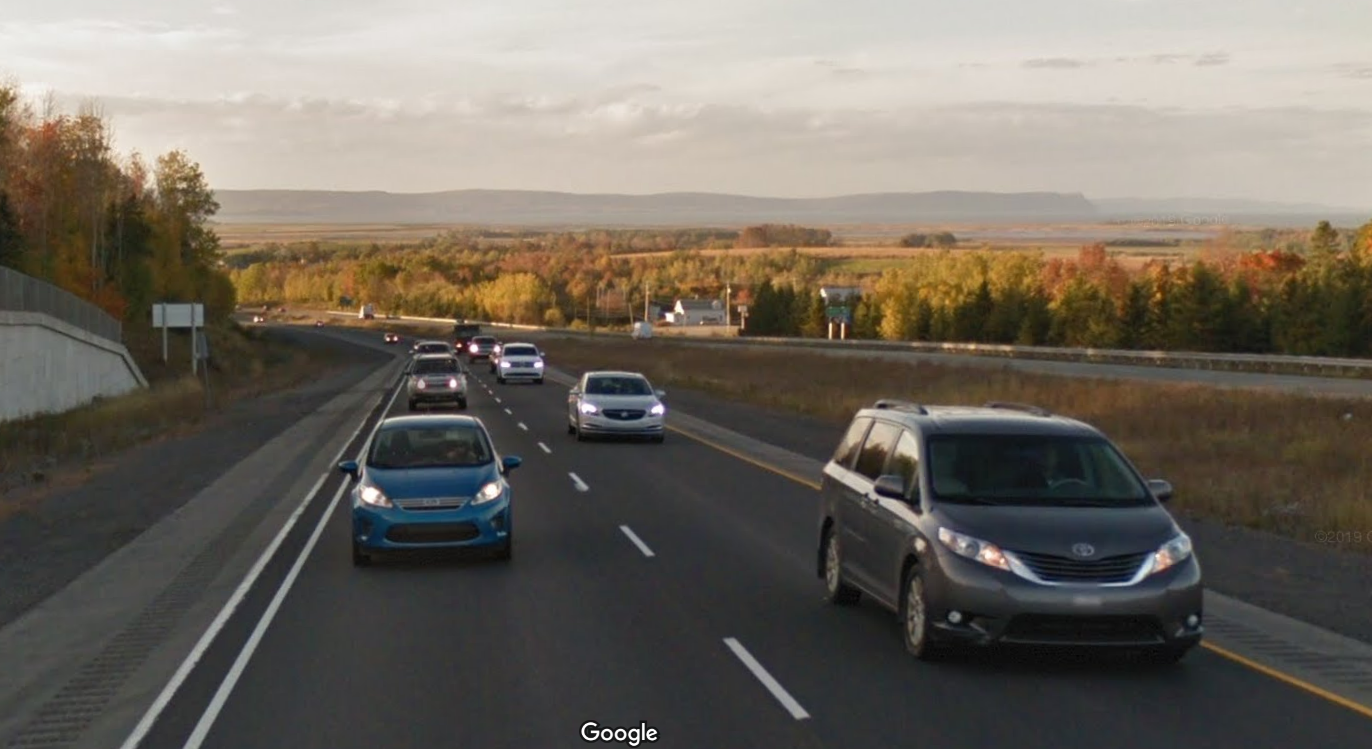 Fun fact. Once upon a time the Province tried to knock down the house. When the highway was being built they wanted to expropriate the property but the owner, Margaret Reid Magee, fought and saved the homestead of her ancestors. On this aerial view the house site is in the red circle. Looks like the roadway had to shift slightly; think of it as a Department of Highways blink. 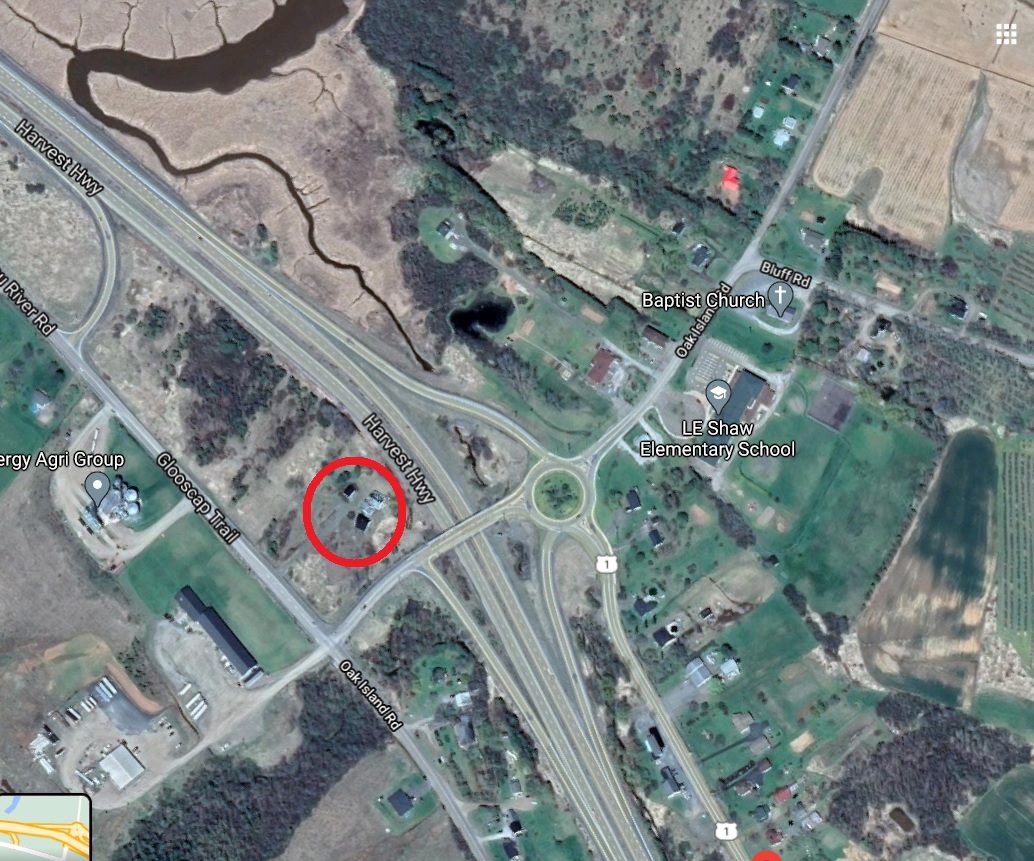 The aerial view also shows that the house was in a power position beside a little waterway that flows into the mouth of the Gaspereau River. The site may well have been used by First Nations folks and Acadians before the Planter settlers from New England.

Enough blame to go around

The Reid House and its property (oh alright, I’ll name it) was purchased several years ago by Nanco Developments. The house has been empty, and apparently fairly open, for some time. There are news stories from 2019 that say Nanco was open to giving the house to the community if it could be moved, or selling it and the land. Despite public affection for the property there was apparently no big idea that people could get behind in an actionable fashion. Without really strong and connected champions it was clear the Reid House was not going to survive.

What was surprising was the sudden, and total, demolition, on a Sunday two weeks before Christmas. This is not a good look. People who use this tactic appear guilty of something even if they are not. In this case Nanco failed to get the Heritage Registration removed so they could be subject to a fine of up to $250,000. That sounds about right.

It deserved a better death. Contributed to the Chronicle Herald

You don’t know what you’ve lost.

It feels to me like the Reid House had been doomed for quite a while. But here is an imaginary future where some good can come from its loss. Let’s say Nanco is fined a couple of hundred thousand because there needs to be a chilling effect so everybody doesn’t start knocking down Registered Properties. That money is a seed for the Reid Fund that helps pay for detailed recording of buildings that are about to be lost. In some cases this might just be detailed photography, but it could include measured drawings of construction details, and samples of such things as paint colours and wallpaper.

In the Reid house there should have been detailed recording of the early cooking hearth with associated beehive-shaped brick oven. The use of the sandstone with the brick looks distinctive to me. But who knows, these features have never been recorded in Nova Scotia. 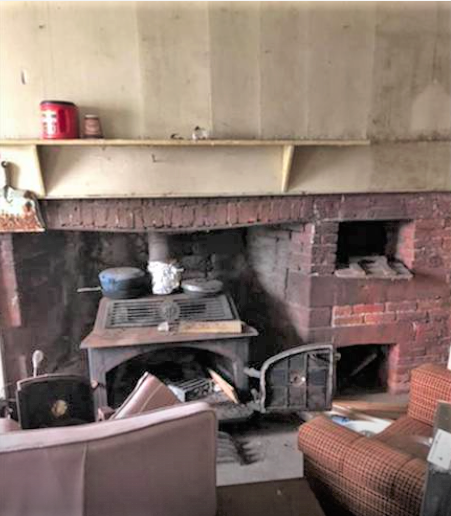 Contributed to the Chronicle Herald

A parlour ceiling in the Reid House looks sort of 1900, but not recorded so who knows. Get the idea? 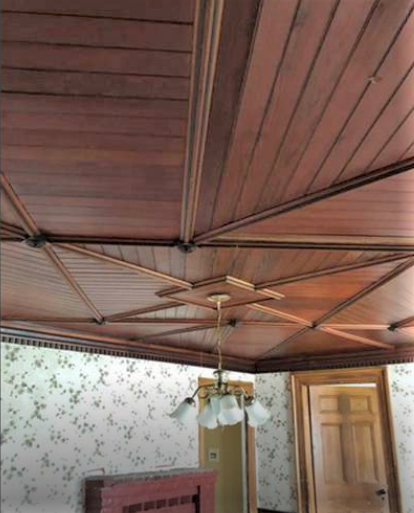 Contributed to the Chronicle Herald

For years archaeologist Laura de Boer has been encouraging detailed studies and recording of standing buildings. There was a recent CBC story about her work.

To my eye the Reid House always felt like it would be at home in Quebec. Perhaps I was remembering the paintings by Cornelius Krieghoff of boisterous celebrations at country inns. 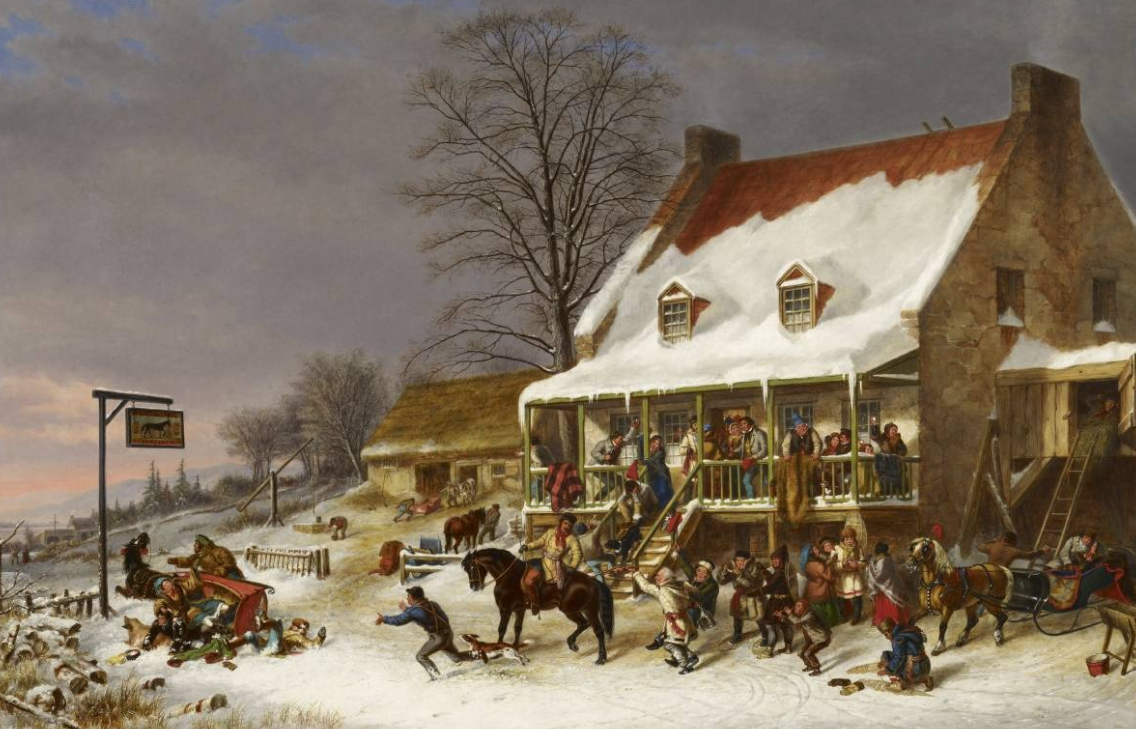 Cornelius Krieghoff, 1857, oil on canvas. The Thomson Collection at the Art Gallery of Ontario

A picturesque 19th-century inn building, with tremendous curb appeal, at the gateway to our wine valley. You would almost think somebody could work with that.