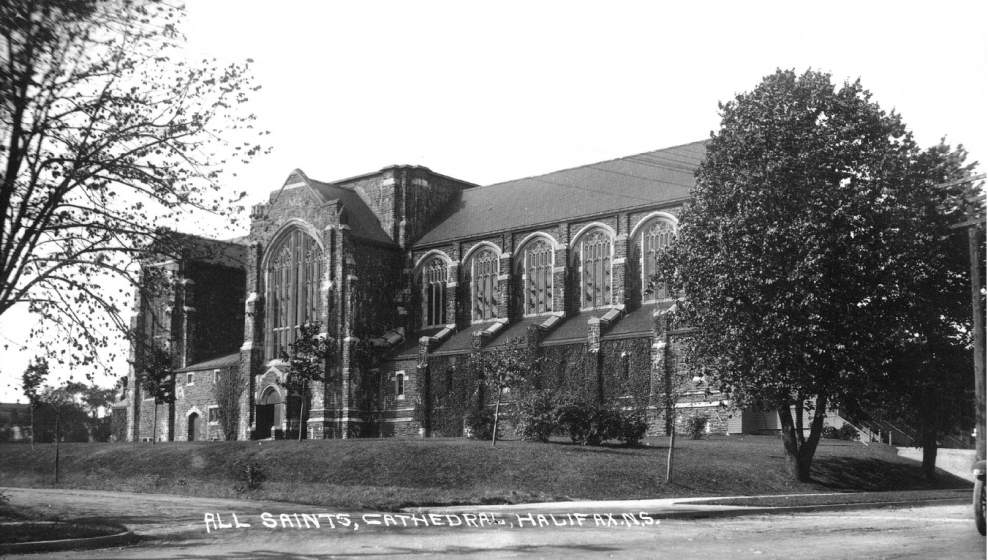 The All Saints Cathedral is tucked away between two condo buildings on Martello Street, facing Victoria Park. It is unfinished, and her corner stone was originally laid at the corner of Spring Garden and Robie. Bishop Binney (of Black Binney House fame) dreamed of a stone cathedral to serve the needs of the western suburbs.  A site had been selected at the corner of Spring Garden and Robie, and plans were drawn up by British architect Arthur Edward Street in 1888. A temporary wooden chapel was built on the site, and a corner stone and single buttress constructed after Binney’s death in 1887. Bishop Frederick Courtney, Binney’s successor, lost interest in the cathedral project – the temporary church met the needs of the community. The bishop was seated at St Luke’s on Morris Street, since 1865, when the chair was moved from St. Paul’s. There was other work to do in the diocese, and money was tight. Courtney resigned in 1904 due to ill health, and took a rector’s position in New York. He was replaced by Clarendon Lamb Worrell, a parish priest from Smiths Falls, Ontario, and English teacher at Royal Military College in Kingston. Shortly after Worrell took over, St Luke’s burned to the ground. Suddenly a new cathedral was needed.

Cathedral comes from the latin word for chair. A cathedral contains the chair of a bishop, which is what makes it a cathedral.

The late 1800s were seeing new cathedrals built throughout the British Empire. There was again a renewed interest in such buildings, and Worrell had $20,000 in insurance money to seed the project. The street plans from 1887 were pulled out, but found not to meet the needs of the church. Local architect William Critchlow Harris, of the firm of Harris & Horton, rather self-servingly dismissed the plans, and gave Worrell the answers he wanted. By March 1906, the Spring Garden site was too small and cramped for the building and facilities Worrell wanted. Harris was from PEI, and while he had completed several churches and public buildings in the Maritimes, he was less successful in the rest of Canada. He prepared a concept and presented it to the bishop.

Worrell now had 2 designs, and did some of his own research. He had an idea of what he wanted, and wrote to Ralph Adams Cram, principal partner of the firm of Cram, Goodhue and Ferguson from New York. The firm had experience with chapels, and working in a “modern” Gothic style, including the commission for the chapel at the US Naval Academy at West Point. Goodhue visited Halifax and was excited by the project. He produced a couple of sketches of what he envisioned, and this probably won his firm the commission over Harris. Harris was persistent, and forced the bishop to hold a competition. Basic plans were to be drawn up for a church to seat 1100, plus a chapel, organ loft, vestries, chapter room and vault, for a total cost of $150,000. The plans were to be judged by  Professor Percy Nobbs, Director of the McGill School of Architecture. Nobbs awarded the competition to Goodhue, chastising Harris in every aspect of his design except cost, writing “…it would be nothing short of a calamity to entrust a Gothic church to Harris, however competent he may be in other branches of architectural practice…”

Nobbs warned the bishop that both plans were over budget and that a great deal of work would be required to reign in the costs of the Goodhue proposal. Goodhue went on to produce working drawings for the entire building, though only a portion would be built initially.

Worrell was on a tight budget. The budget was $150,000, no more. Goodhue calculated his design to come in at 169,000. Before the project went to tender, Harris was retained as superintendent of the project to work with Goodhue. The call for tenders was requested for August 1907 and called for the first construction of chancel, transepts, crossing and three bays of the nave with a temporary wooden front. Three bids were received, and all were over budget.

S. M. Brookfield, Ltd., contractors and builders, bid $155,474.00. it was an all inclusive price. Samuel Brookfield worked with the bishop to bring down costs by changing methods and materials of construction, and was able to project a reduction in costs of almost $24,000. In the end, the final construction contract was signed for $124,245.00. $15,000 was saved using concrete pillars not granite, and 1700 for substituting molded concrete trim rather then concrete block trim. Sod was turned on 26 September, 1907, and completion projected for June 1909. This was to be the then largest civil construction project in Halifax. As construction progressed, three more bays were added to the nave, financed directly from Samuel Brookfield. This left the Cathedral only one bay short of the original design, rather then 4 as stated by the build contract.

Construction progressed slowly, likely due to shortage of funds. Donations from the laity were projected at $40,000, but by 1909, only $16,000 had been collected. Goodhue was non-compromising, so Worrell often turned to the more sensitive Harris and Horton when seeking advice on cost-cutting. The church leaked, as mortar specified by Goodhue failed around the ironstone. This appears to have been a result of the condition of the stone and the mortar, and was finally solved with a new mortar formula derived by a Dal Chemistry professor, when the same problem affected buildings underway at the campus. The cathedral was never finished as designed. Continued water issues plagued the church, and  wrongfully S. M Brookfield bore the blame for shoddy construction. Funds were required for constant repairs. There is a certain irony that Brookfield gets wrongly blamed for the issues with the church, despite him enabling it to be built.