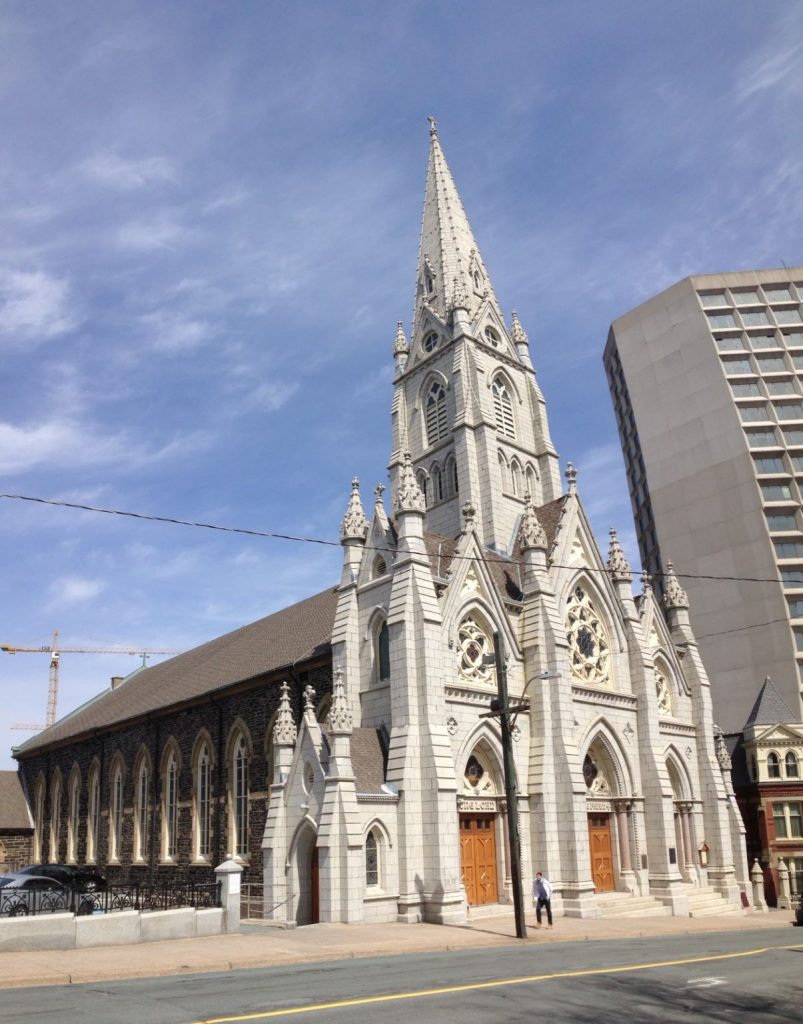 St Mary’s Cathedral Basilica is the seat of the Roman Catholic Bishop in Halifax. Located on the corner of Spring Garden Road and Barrington Street, the initial construction of the church occurred between 1820-1830.

Catholics were not permitted to build a church in Halifax until 1783, presumably in an attempt to prevent large numbers of predominately Catholic French from overrunning the city. The Church of Saint Peter, a small wood frame building, was constructed, and opened on July 19, 1784. Located roughly on the site of the current final 2 bays and apse, it faced Grafton Street, and was in use until 1829. The original facade of St Mary’s was rather simple – three pointed arch doorways, with pointed arch windows above, with a projected central bay. The flat-topped tower was terminated with a parapet and pinnacles on the 4 corners. Though simple in form, the church slightly predates Montreal’s Notre Dame as the first significant Gothic revival building in Canada.

The Gothic revival (or Neo-Gothic) style was based on romanticism, and renewed interest in the medieval period. The original Gothic period ran from the 12th to 16th century, and was responsible for a number of very famous European churches. Neo-Gothic details include pointed arches, ribbed vaults, and flying buttresses. The Gothic style was particularly suited to the Canadian climate, with steep roofs and thick walls. It also served to tie Canada back to its European roots.

Though no notes or documentation of the original design survive, it is thought that the interior is a Gothic interpretation of James Gibbs’ St Martin-in-the-Fields. Early Gothic revival buildings in Canada maintained a Georgian look to them  –  the form and proportions of the building were Georgian, but featured Gothic detailing. In the initial interior of St Mary’s, the nave and aisles were present, as were the vaults without ribs. The interior appears to be faced stone, but was most likely plaster imitation. The church featured a semi-circular apse, though it appears to have been screened from the nave by a series of pointed arches. Also notable were the galleries above the aisles.

An extensive renovation program, begun in 1862, saw the original church building expanded with the demolition of the original apse, construction of an additional 4 bays and a new 5-sided polygonal apse. The expansion was designed by Irish-born, Brooklyn-based architect Patrick C. Keely. In his expansion, he chose to integrate and renovate the existing church. Among the changes, Keely installed larger windows, replacing what had formerly been 2 windows per bay with a single, larger lancet window.

The interior changes included a new apse, and the removal of the side galleries, opening the aisles to the roof. The vaults were ribbed, and the style of the columns was changed. St. Mary’s Basilica, as we know it today, is best known for its granite facade, which was erected later in the renovation program between 1868-1874. The remainder of the church is constructed of iron stone, and Gothic details are limited to lancet windows. 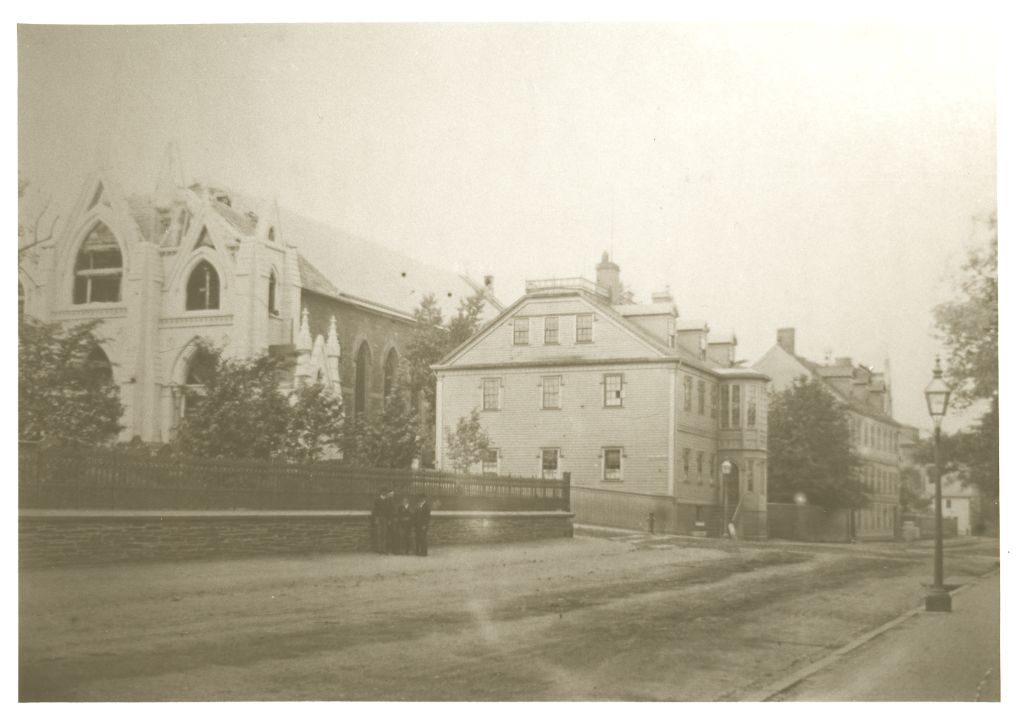 The St. Mary’s Glebe House on the corner looks Georgian in form and proportion, but if you look closely, you can see Gothic details over the windows, and the entry porch. This Glebe House was erected in 1802.

The Canadian Architect and Builder, a professional architectural journal, featured a plate and wrote of the new facade in 1893.

“St Mary’s Cathedral is regarded as being the finest sacred building in Halifax. The architect was a Mr. McCarthy of New York. The entire front and spire is built of dressed granite. The sides are not in keeping with the front of the structure, but are built of iron stone with free stone facings. It is a matter of regret that a structure upon which so much money has been spent should be finished in this manner. If the whole building had been completed in a style to correspond with the front, and erected in a square by itself instead of allowing other buildings to hide a part, it would have shown to much better advantage.”

Heaping some criticism, obviously unaware of the building’s history, and getting the name of the architect wrong. 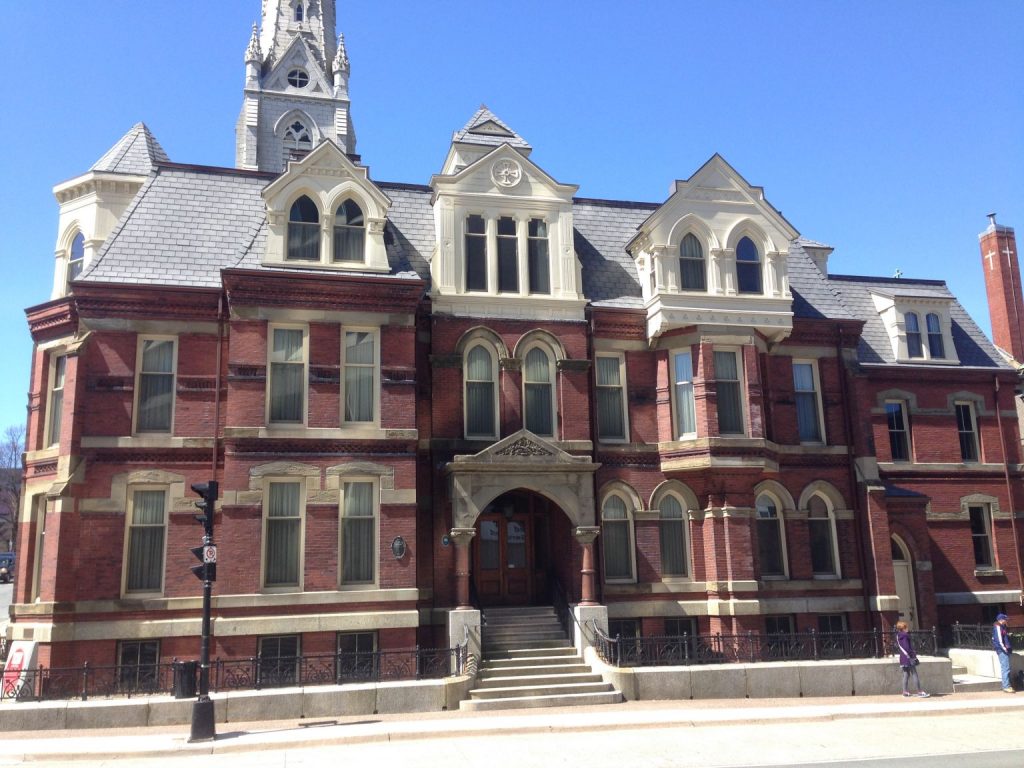 The current St Mary’s Glebe House was built in 1897, and also features Gothic detailing but is more eclectic in nature.