The Italianate style was common in Canada from 1850-1870. It was particularly popular for commercial buildings in Halifax, possibly due to a number of large fires requiring reconstructing entire blocks of the city.

The main identifying features of the style include:

Cornices are a decorative moulding found at the roof line of a building – they can be thought of as a building’s crown. These, combined with the round headed window and flat roof, are common to almost all Italianate buildings. The cornice often appears to be supported by corbels – which are decorative bracket-like devices attached to the facade of a building. In Italianate, they often are scroll-like. String courses are protruding horizontal bands on the facade which will sometimes follow the round head of the window, and quoins are large stones to give prominence to the corners of the building.

Granville Street was rebuilt beginning in 1859, after it was destroyed by fire. After previous fires in Halifax, a law was passed in 1857 that banned wooden construction. Fire was always a growing concern in cities – especially Halifax, which was predominately made of wooden buildings until the 1857 bylaw. This bylaw came much later than in other jurisdictions, probably because Halifax had escaped large fires that affected other cities.

The buildings on Granville Street represented the growth of the merchant sector of the city. No longer were proprietors living above their shops, instead these buildings were dedicated to commerce. Retail and sales offices were located on the first floor. The upper floors were constructed to be warehouse or manufacturing space, and merchants now lived elsewhere.

The 1850s were a time of prosperity in Halifax. Railway service to Windsor had begun, and a reciprocity (free trade) treaty was signed with the Americans, improving trade. Many of the buildings on Granville Street were designed by William Thomas, a prominent architect from Toronto. He emigrated to Canada in 1840, and designed numerous courthouses in Ontario. He was also responsible locally for St Matthew’s Church and the Spring Garden courthouse.

All of the Granville buildings feature cornices, supported by corbels, string courses, and rounded arch windows. The Coombs English Shoe Store is an Italianate-style storefront; however, the facade is constructed of cast iron, allowing for larger windows. The facade again features a cornice, round headed windows, and prominent moldings, and was designed and manufactured by the Architectural Iron Works of New York City.

The Colwell Building was constructed on Barrington Street in 1871. It features a white stucco exterior, elaborate cornice supported by corbels, and round headed windows. Also prominent are the string courses between stories. 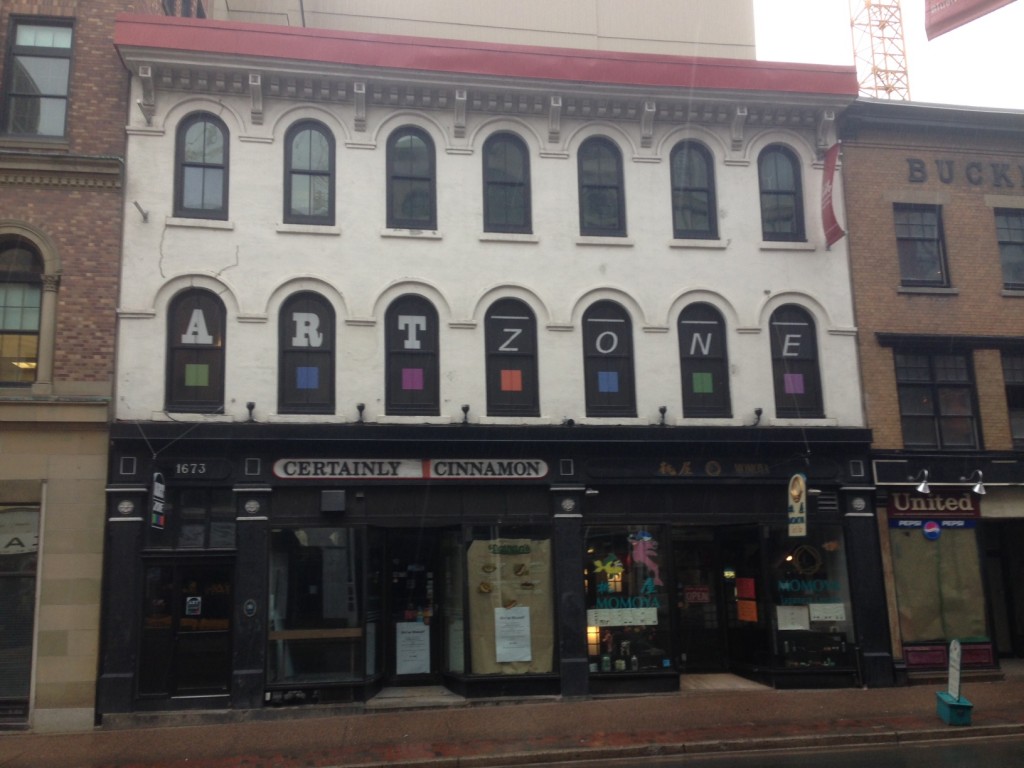 The style also found its way into public buildings. The current Art Gallery of Nova Scotia was built as the customs house and post office building in 1868, and modelled on an Italian Renaissance palazzo. 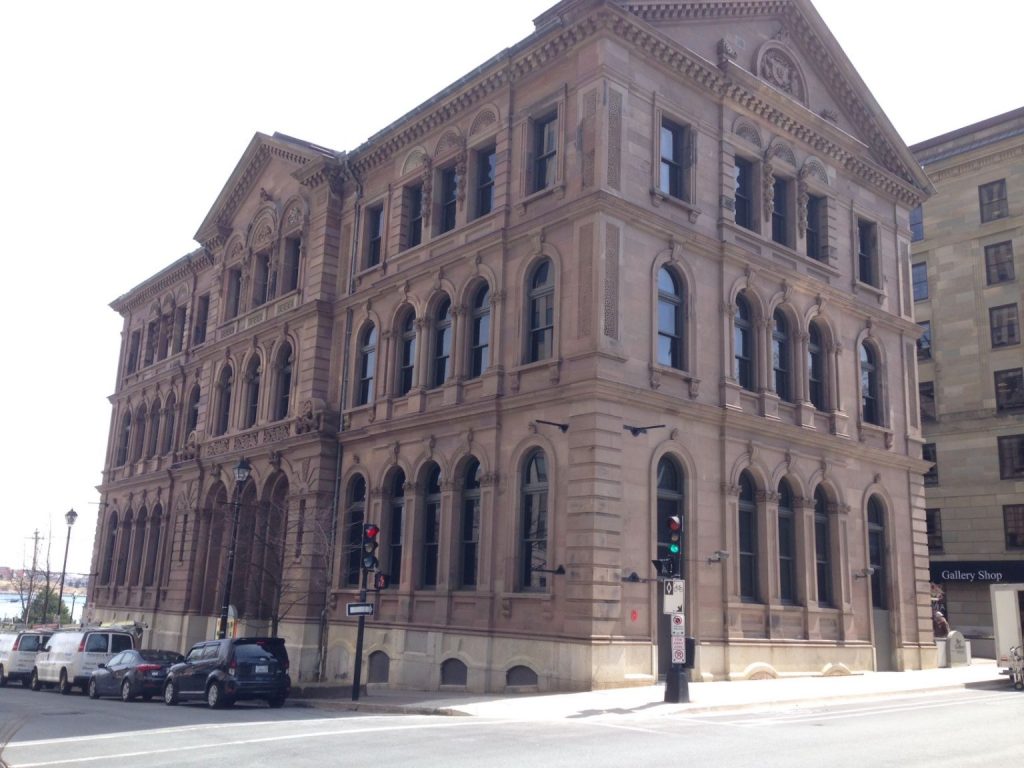 Designed by David Stirling, it was built in 1868 under the direction first of contractor George Lang, and competed by John Brookfield. The building features the Italianate round headed windows, string courses, and shallow sloped roof. The building also is a good example of quoins on the first story corners and, like the courthouse, features a protruding central section.

The original St Agnes Roman Catholic Church on Mumford Road was thought to be designed by Arthur F. Pelton. He was a prominent builder in Halifax and Windsor who worked for the Rhodes Curry Company, and was an employer to W.D Piercey, who would go on to start Piercey Supplies Ltd (now part of Rona). Built in 1889, it falls outside the period of the style’s prominence, but is none the less an excellent example. Devoid of surrounding context, you would be hard pressed to say this photo wasn’t taken in Italy, given the church’s resemblance to Florence Cathedral. 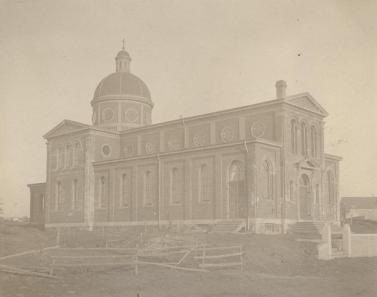 In 1961, it was determined that the original building was no longer serviceable, and it was replaced by a contemporary Italianate structure, which opened in September 1965. The new church got a modern treatment, but maintained the form, round headed windows, and cornice of the original, and added a clock tower out of an Renaissance plaza. 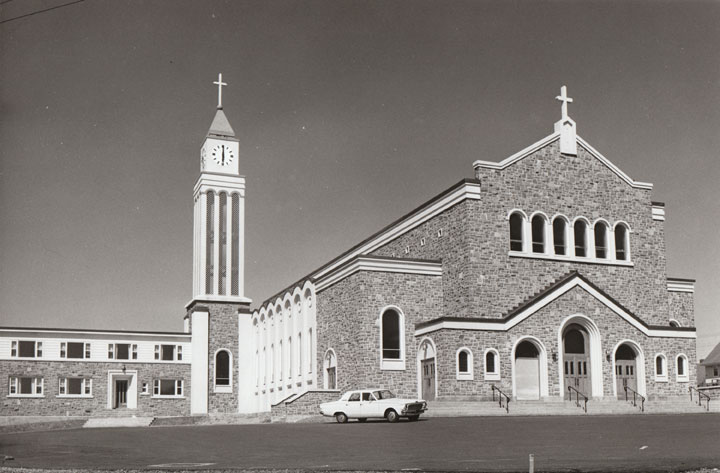 The original and most prominent central section of the courthouse was completed in 1862. A rear wing was added in 1882, and west and east wings in 1908 and 1931, respectively. William Thomas and Sons of Toronto won a competition in 1851 to design a building for Halifax County that would house the Supreme and County courts and ancillary services. Their mandate was also to create an impression of stability and strength befitting the halls of justice. The construction tender was awarded to George Laing of New Brunswick.

The Halifax Courthouse provided permanent space for the Supreme Court of Nova Scotia, with two courtrooms, judges’ chambers, registry offices, and a law library. When county courts were established in 1875, the 1882 wing was added to accommodate it. When new Law Courts were built on the waterfront, opening in 1971, the building became a Provincial Government library. In 1985 it was restored to serve as a courthouse for the Nova Scotia Provincial Court. 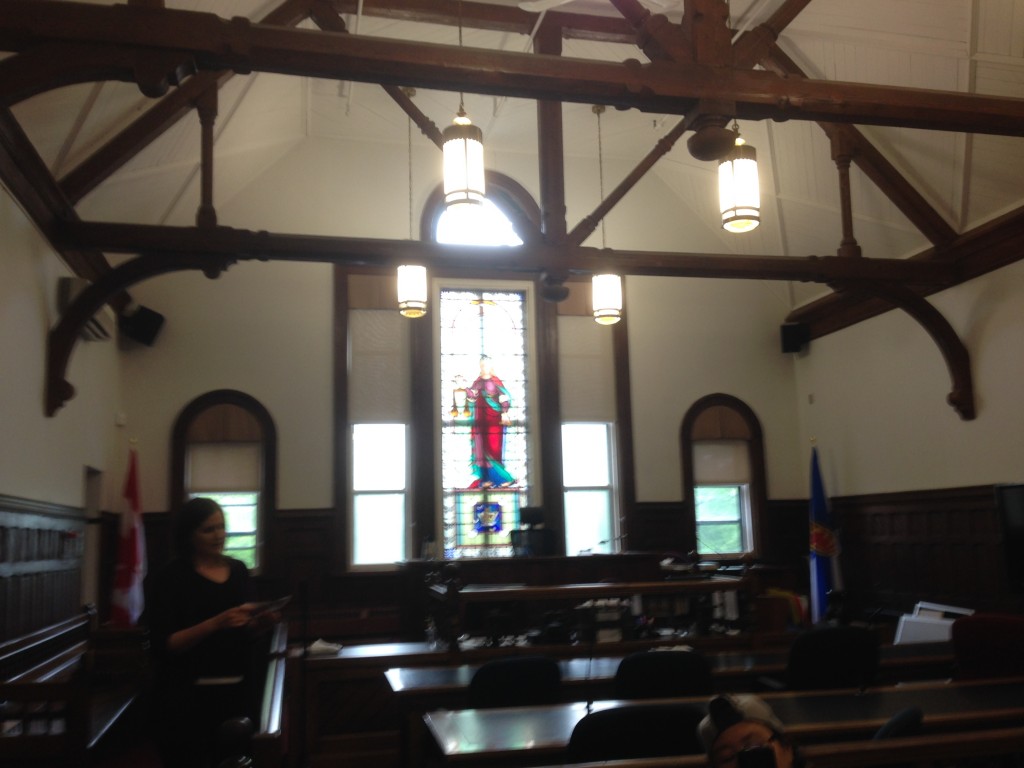 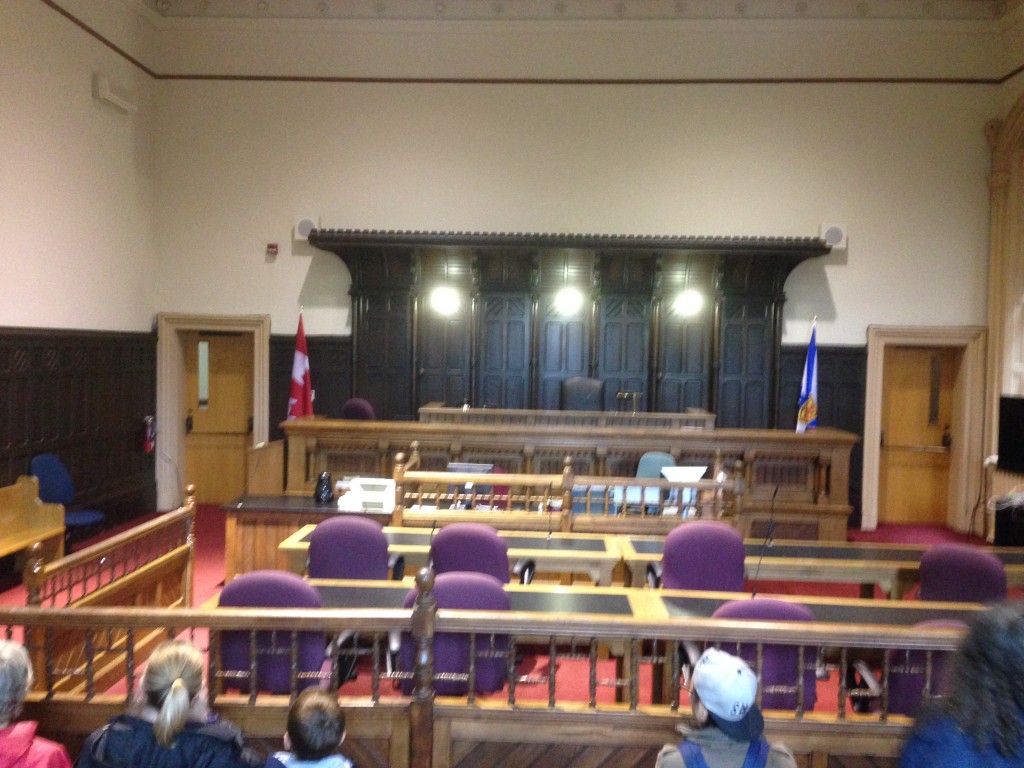 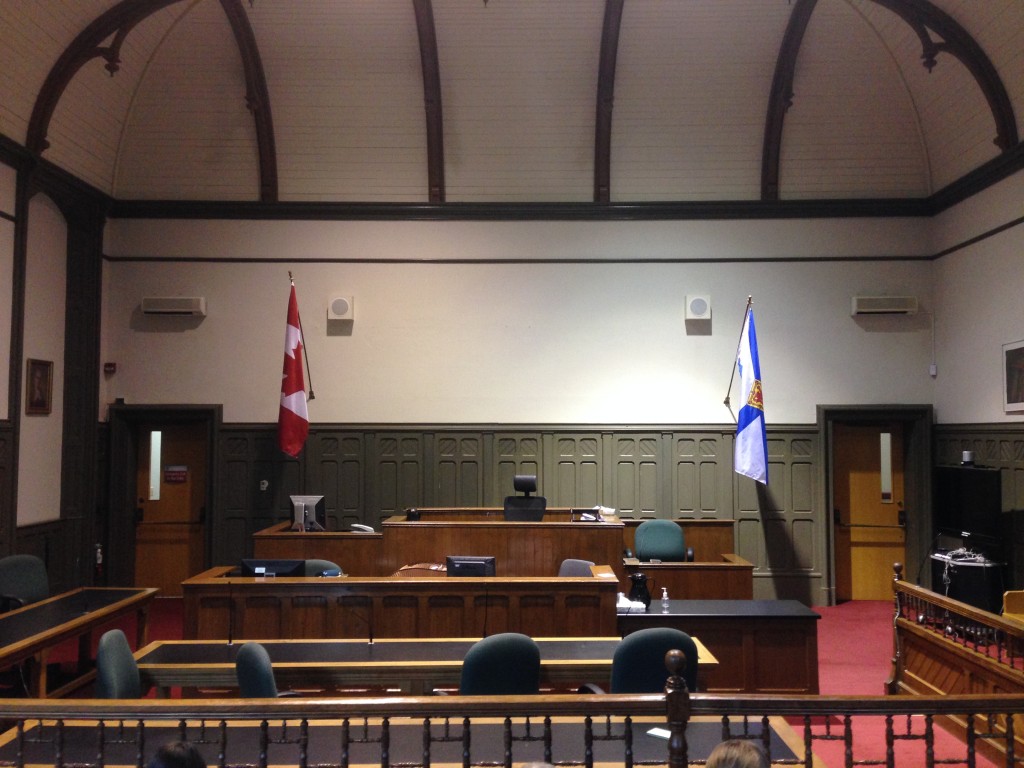 The former Admiralty Court. This is the room where the inquiry into the Halifax Explosion was held.

Of interesting note: as built, the courthouse featured a cupola on the roof, as seen in this photo from the unveiling of the Parker Welsford Monument. 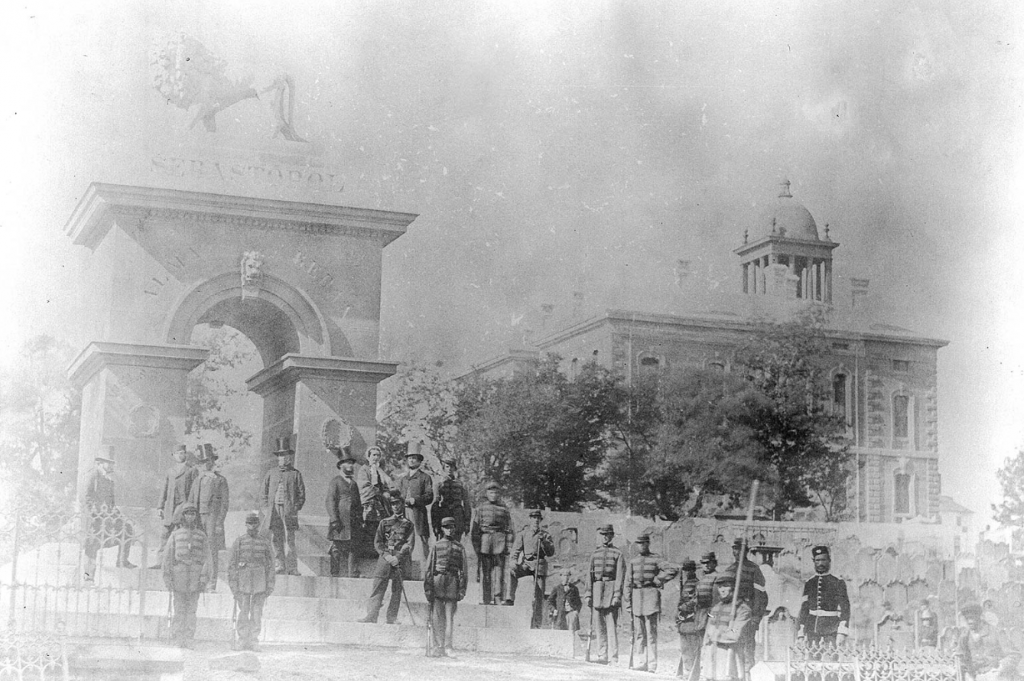 The Italianate style was also popularly used for residences. 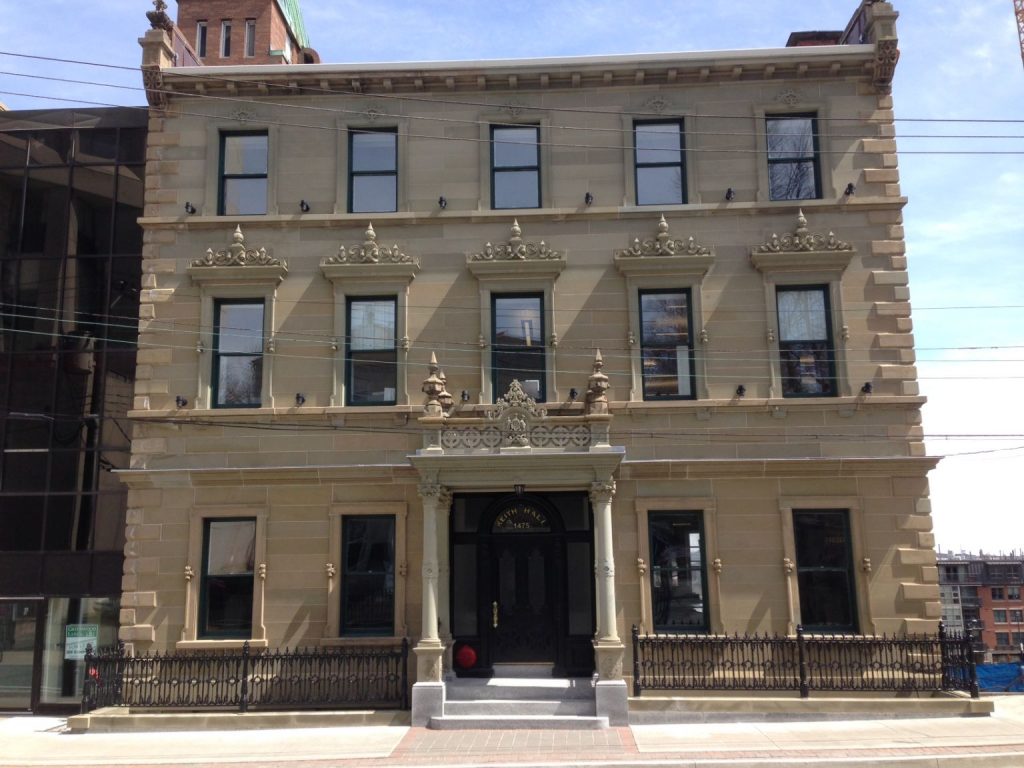 Begun in 1863, Keith Hall was the residence of Halifax brewer (and 2-time mayor) Alexander Keith. The house was designed in the Italianate style by Scottish architect William Hay. Keeping with the neighbours, it features a Georgian 5- bay facade with central door. The roof, however, is flat. The building features a cornice, string courses, and classical detailing around the windows.

Benjamin Weir House, located next door and constructed in 1864 of Wallace sandstone, is more of a Italianate villa. A symmetrical 5-bay facade features sandstone-bracketed round headed windows, a cornice, and shallow sloping roof. A wrought iron balcony features on the front facade. 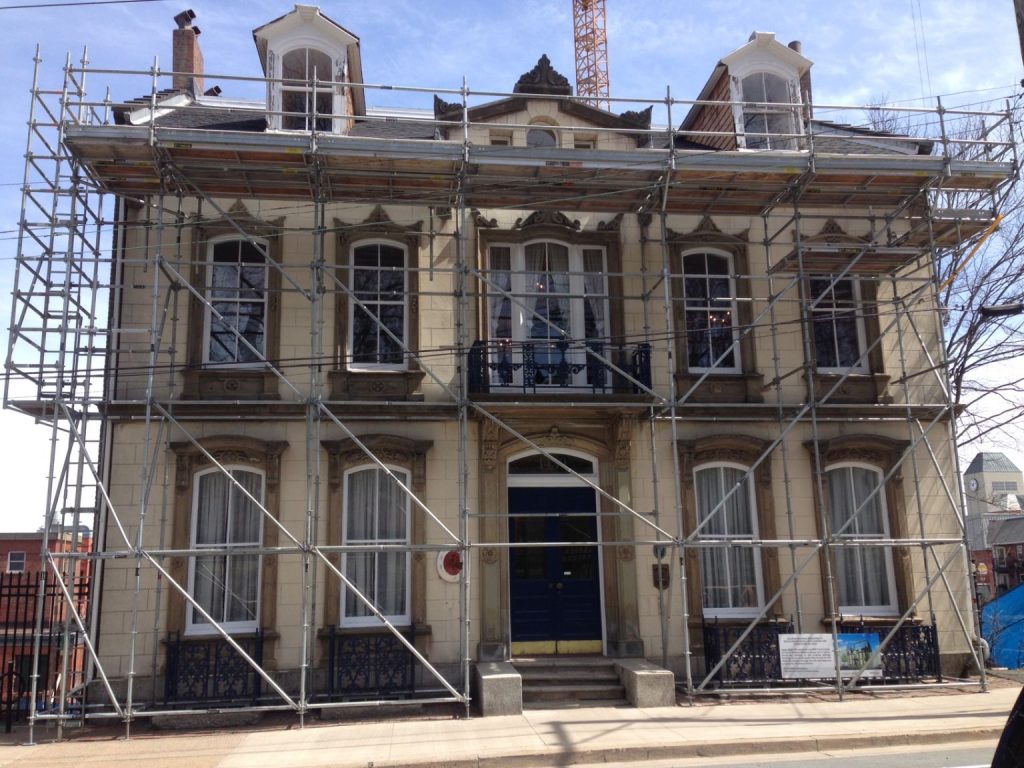 While it has many of the features of a Italianate villa, including a Romeo and Juliet balcony on the rear, this house lacks one of the most common features of the Italianate villa, namely a belvedere. Belle vedere means “beautiful view” in Italian. A belvedere is typically a tower, or other feature above the roof, offering a view. The 4 dormers technically could count, as they offered a view when the house was built. A better example would be Hart House, which since 1925 has served as the Dalhouse University President’s residence on Oxford Street. The house was built in 1860 for Levi Hart, who was a West Indies merchant. 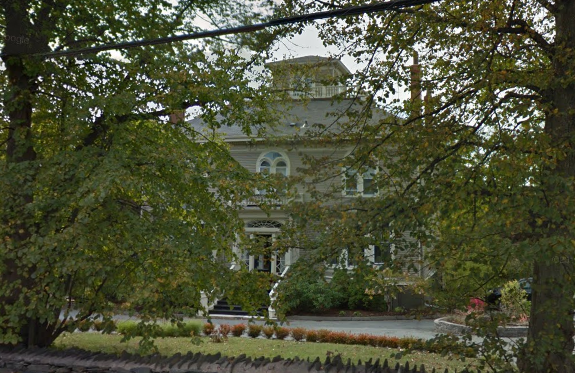 Today, the house is obstructed by trees, But the NS Archives has a photo of the neighboring Wylde House from 1870, which appears to be identical. Ambrae Academy is now located on this site. 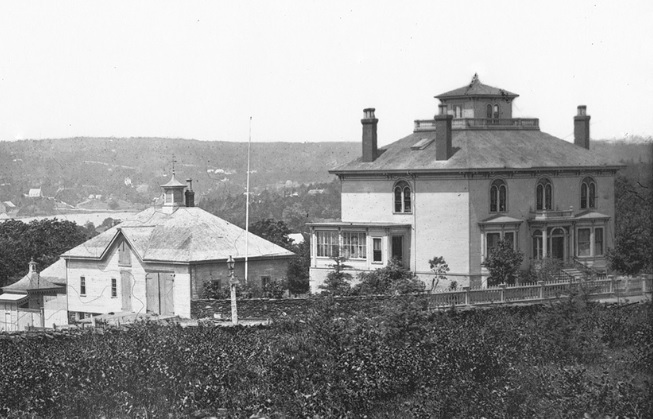 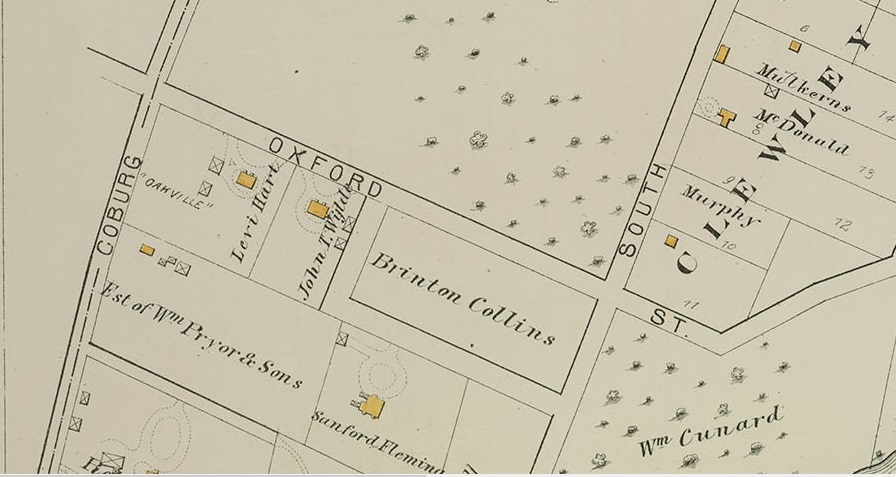