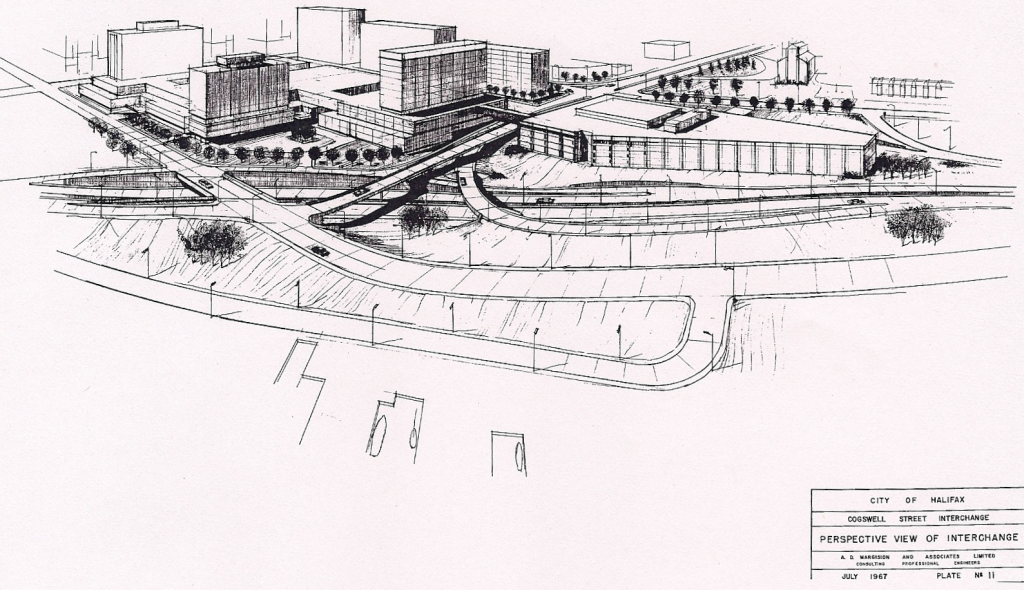 Harbour Drive is one of the more interesting aspects of the city. Its proposal is responsible for the single most awkward urban artifact in Halifax – the Cogswell Interchange. Most people know Cogswell was meant to be the start of Harbour Drive.

The roots of Harbour Drive come from the development community, and a desire to improve transportation in Halifax. Both the post-war plan from 1945 and Stevenson’s 1957 Study enabled the land clearance required to build the highway, as well as arguing for improved transportation. The 1945 master plan in fact described an elevated expressway starting at Water and George streets, and running to Cunard and Gottingen, finally running to North and Robie.

In June of 1965, the DeLeuw, Cather & Company of Canada Limited was retained by the city to create a functional plan for Harbour Drive, from the foot of Prince Street to the  corner of Devonshire and Barrington. The plan was completed in November, and called for a 50mph controlled access highway. It was estimated to cost 9.5 million, not including land costs.

The Roadway was planned as a 4 lane divided highway. a 12′ median would be provided, with 8′ shoulders. Interchanges were suggested at Devonshire,  the MacDonald Bridge, and at Cogswell, with a grade separation occurring at  Cornwallis. The report  also a Suggested Building a Second crossing over the Harbour, and a bridge over the northwest arm. A Bridge parallel to the MacDonald, was listed as a possibility, for the second crossing.  The plans called for the expressway to be grade separated through the central business district, with pedestrian overpasses. New modern buildings would replace demolished structures on either side of the expressways. As in other jurisdictions, the expressway was meant to be modern, clean and visually pleasing and orderly.

The following images are from the Geometric design study. This report went on to become the Functional plan, and was also prepared by the DeLeuw, Cather & Company of Canada Limited 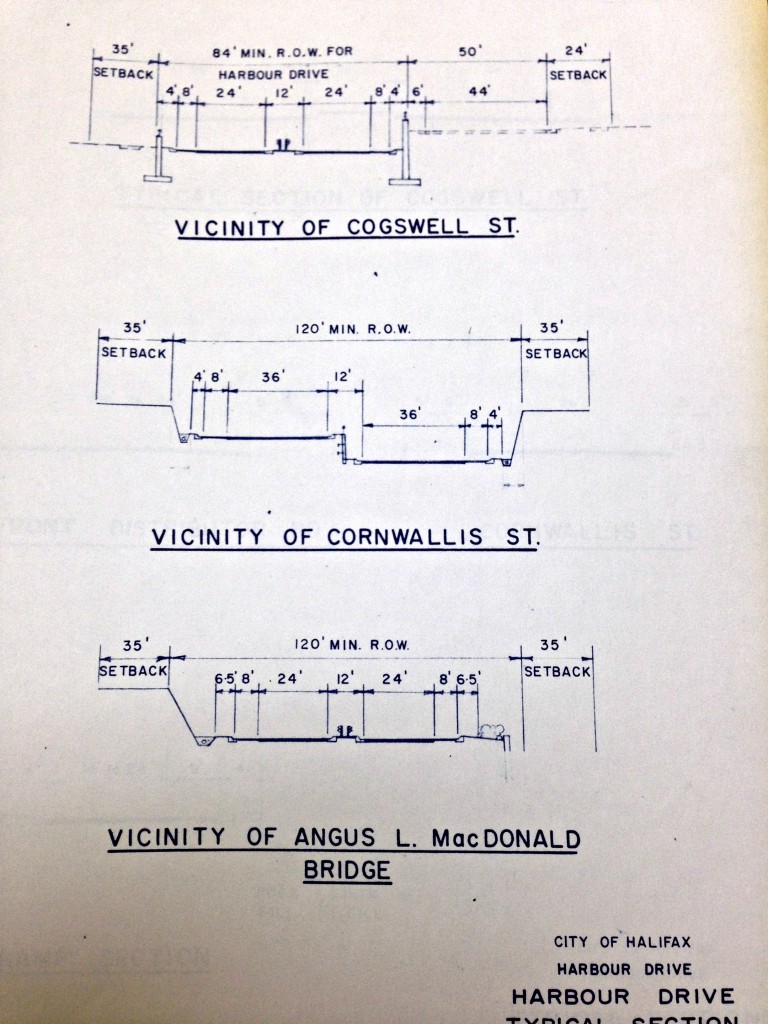 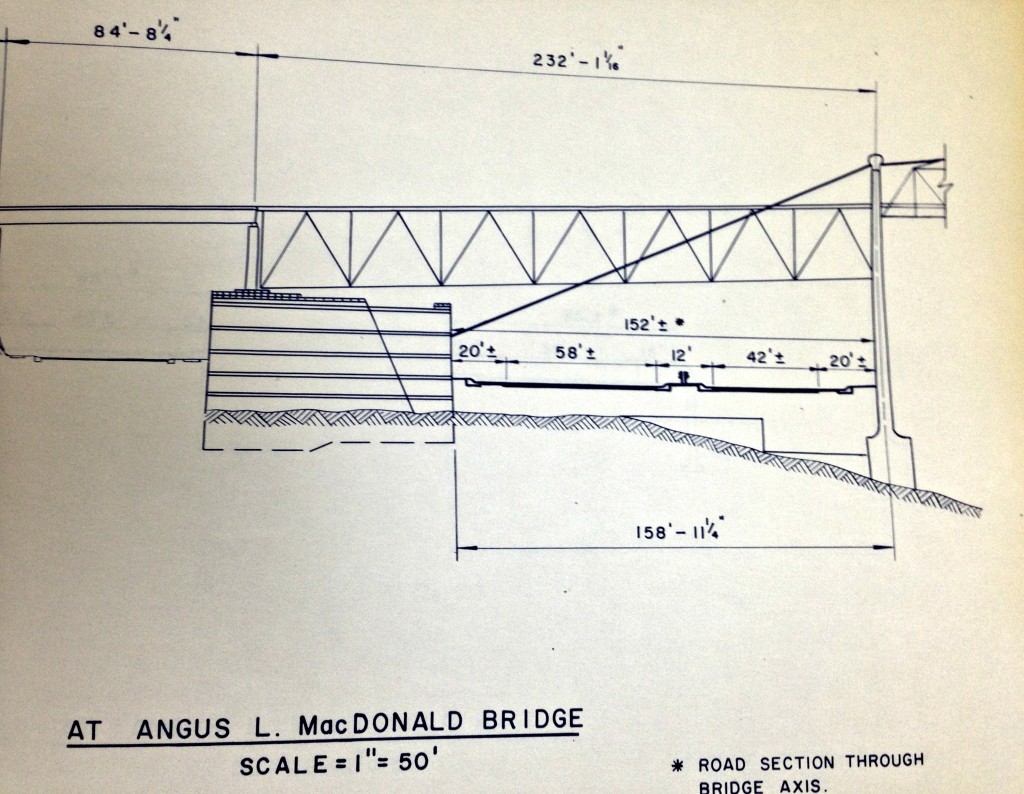 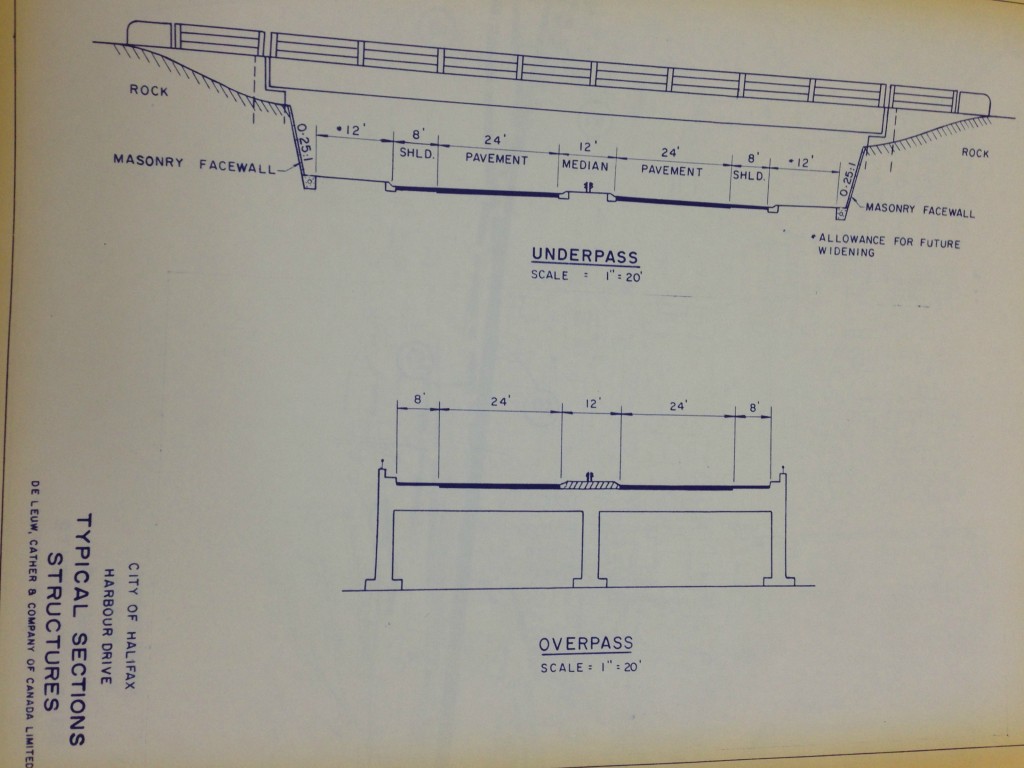 The  Functional Planning Report for Harbour Drive” from November 1965 outlined the entire full concept for Harbour drive. the proposal actually begins in the North West End of the City – Cogswell was simply the first and only piece to be constructed. 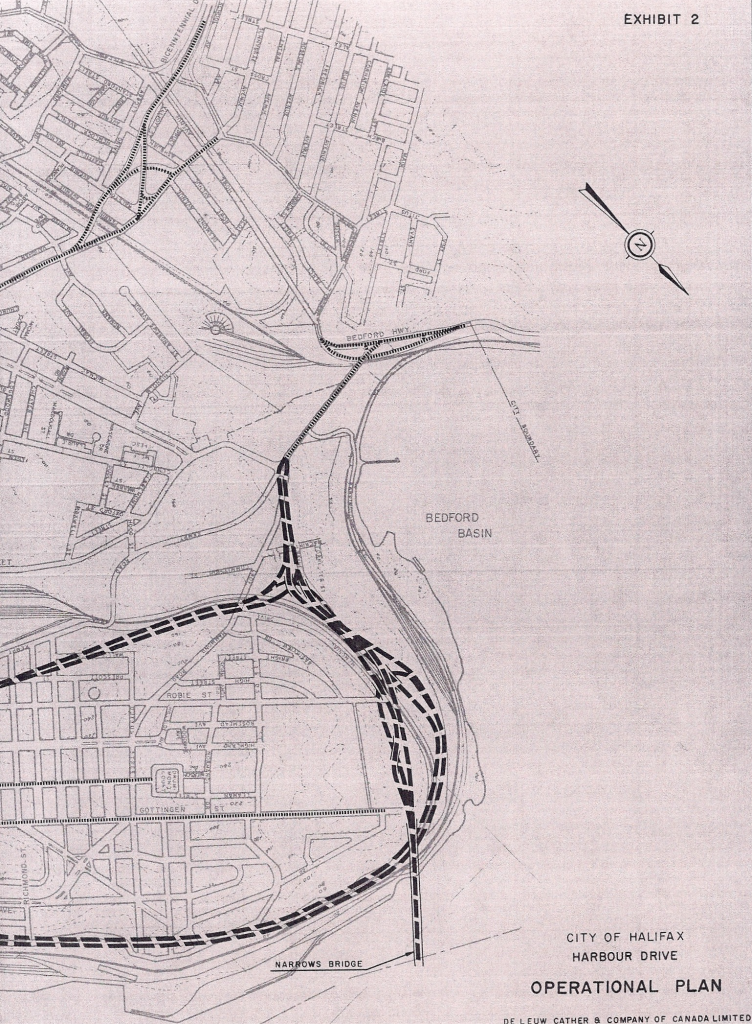 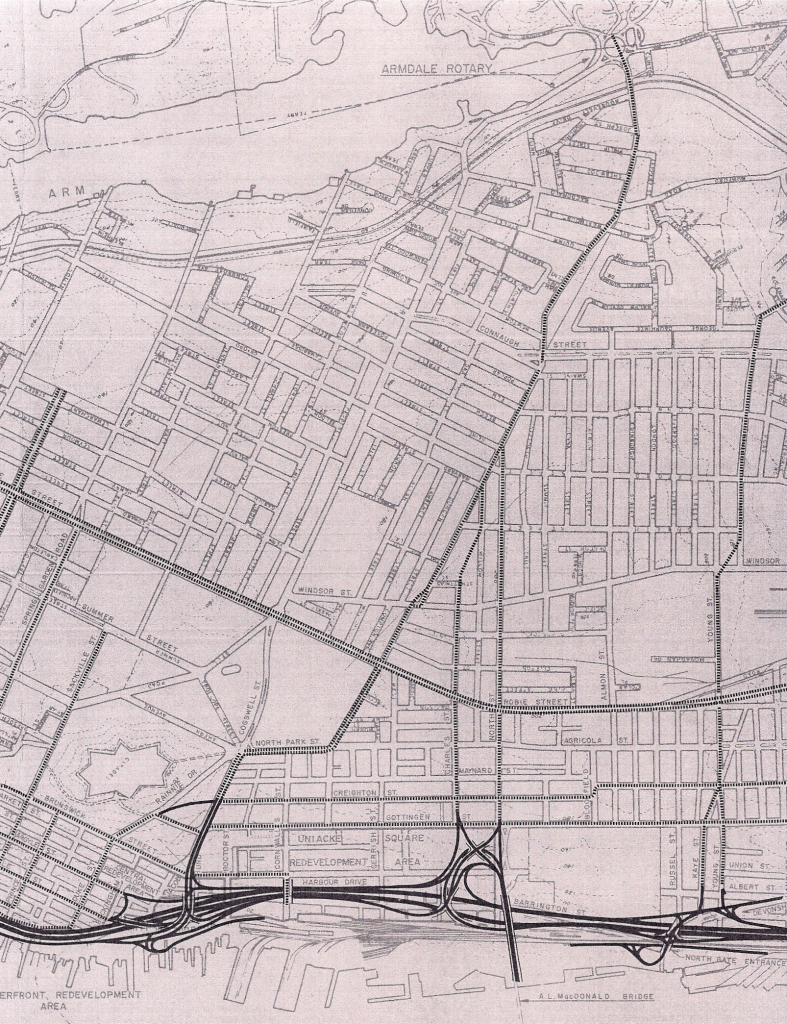 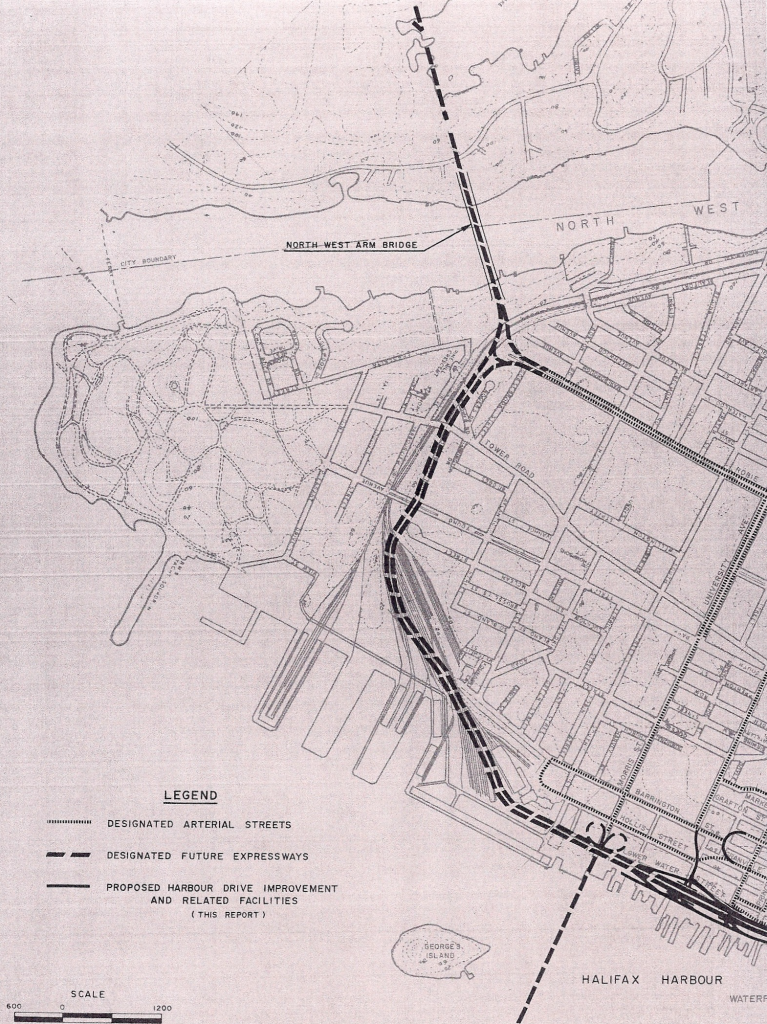 From the beginning there was doubt about the need for such an expressway, and the city’s ability to finance it. City staff pointed out that most of the route would be through blighted areas that were to be cleared for improvement. Approval of the plans was also a prerequisite for the city to secure Scotia Square, as well as a public housing project. This was due to CMHC’s involvement in the redevelopment schemes. An agreement between the city and CMHC required officials to submit the Harbour Drive functional designs months prior to the second stage of Scotia Square construction.

Between 1965 and 1968, various adjustments to the route and details were worked out. City staff had the right of way expanded to 168 feet, but most felt it was too wide, and was cut back down to 70 feet, keeping the project alive. Opposition also appeared from those wanting to preserve heritage properties that would be destroyed by the expressway. 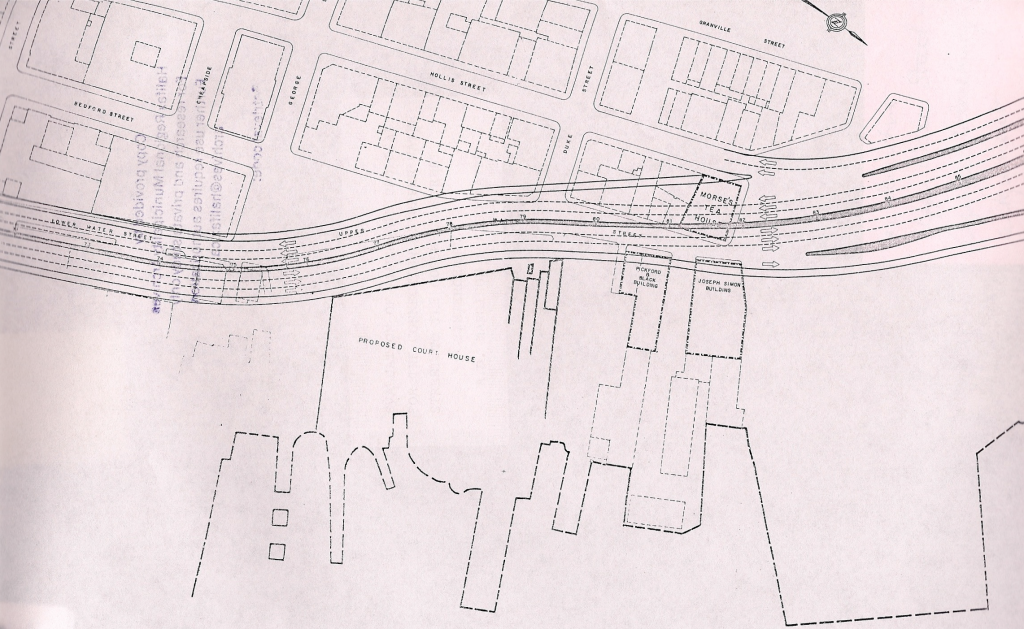 In March 1968, Council approved the Cogswell Interchange portion of the project, despite wide opposition based on the need and protection of heritage. Among the largest proponents were the developers of Scotia Square, who considered the highway a necessity, as it would be the replacement for the streets that were buried under Scotia Square’s footprint. Halifax Developments Limited emphasized that Harbour Drive and Scotia Square must be completed simultaneously. 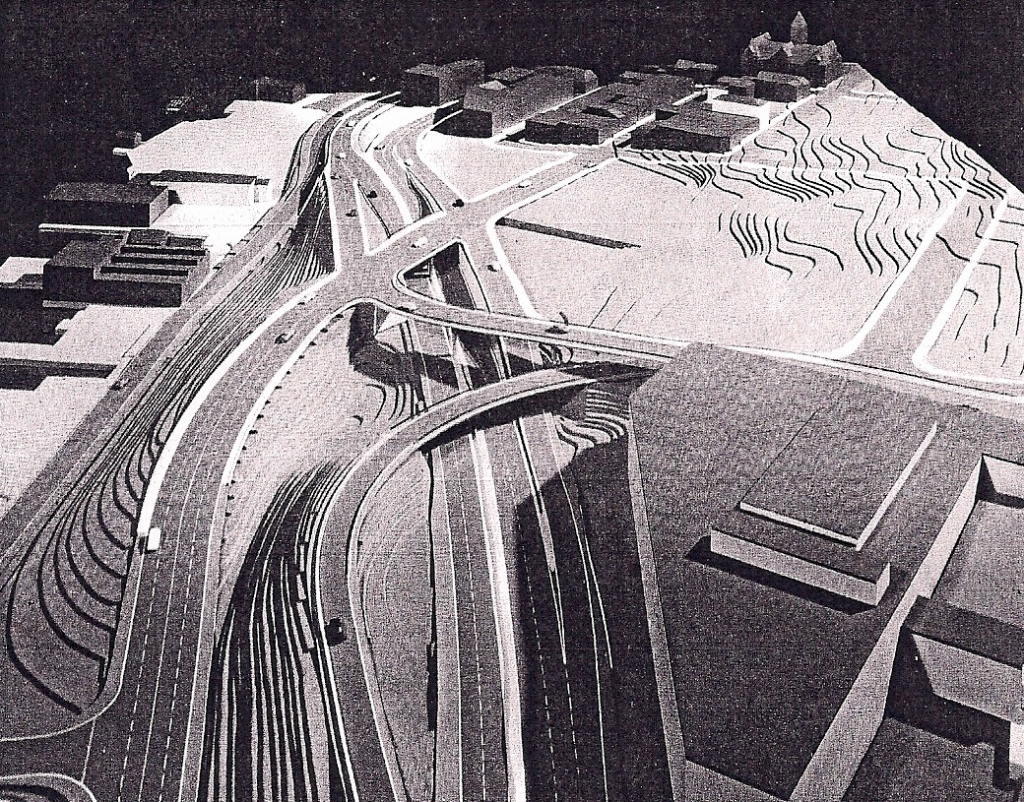 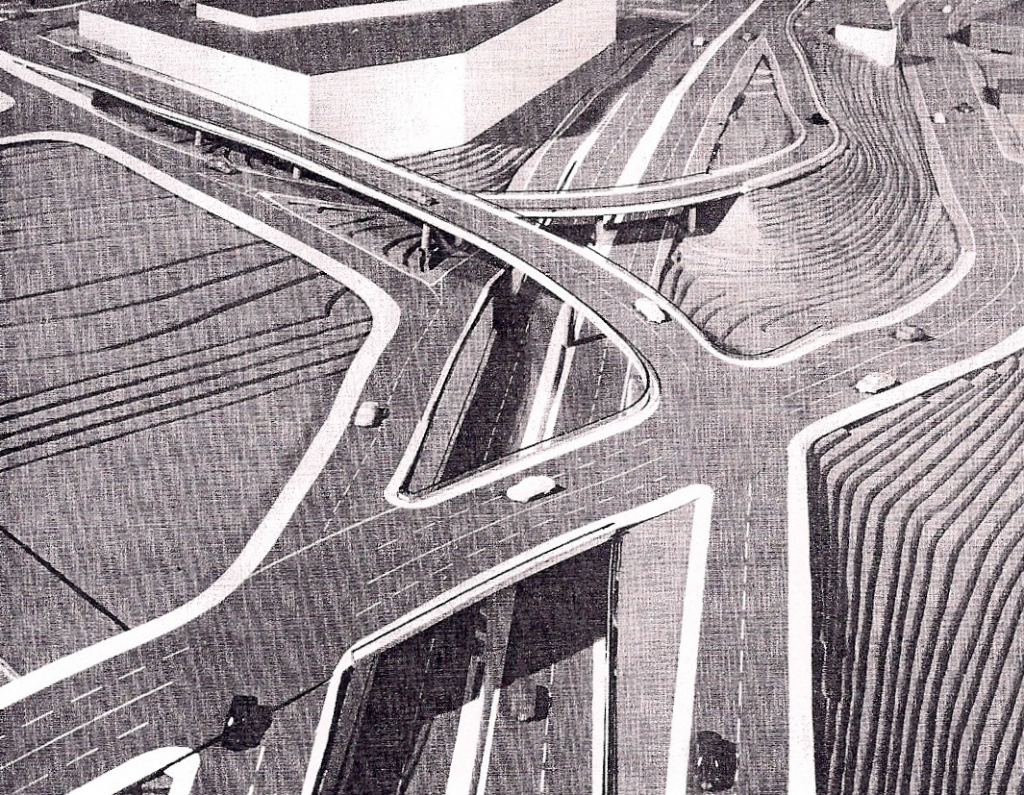 Construction Started on the interchange after it was approved – Demolitions hadent even been completed yet. 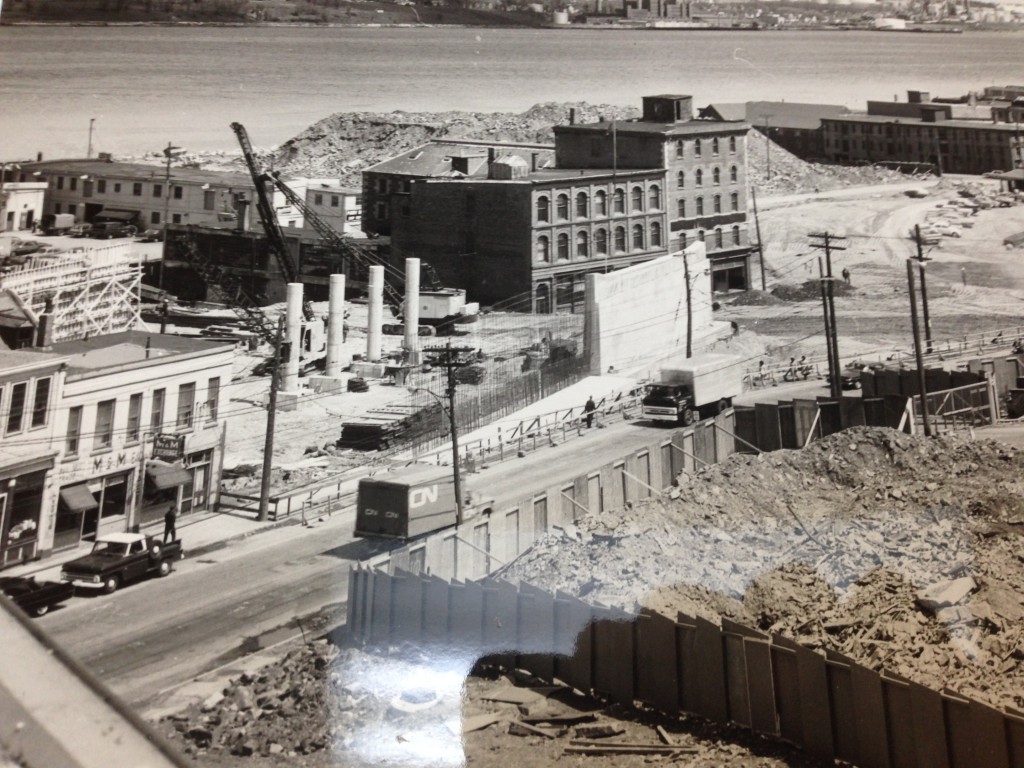 Barrington Street overpass. Note buildings still in the way of the highway.. 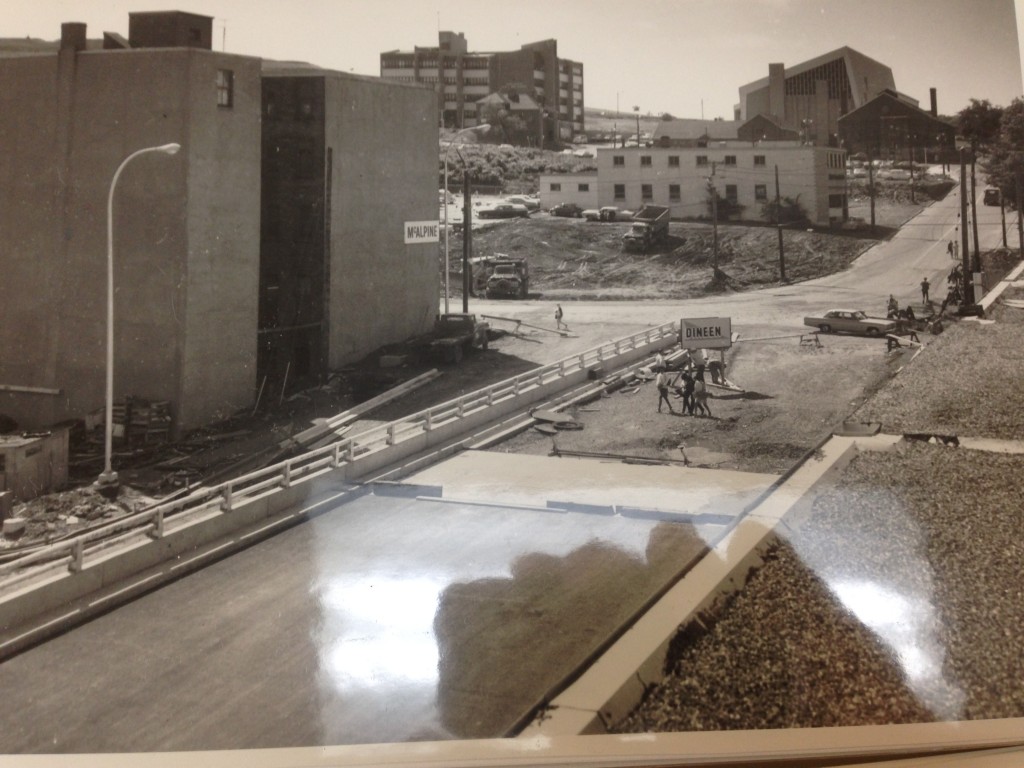 Corner of Cogswell and Brunswick

By 1972 Cogswell would be the end of Harbour Drive. The expressway would end, and funnel through downtown as it does today. The North End expansion would be built as planned. Opposition however was strong, with groups arguing the highway was unnecessary and that it would destroy neighborhoods. In the end, funding couldn’t be found and, combined with enough opposition to make proceeding politically unpalatable, only the Cogswell portion was ever built. 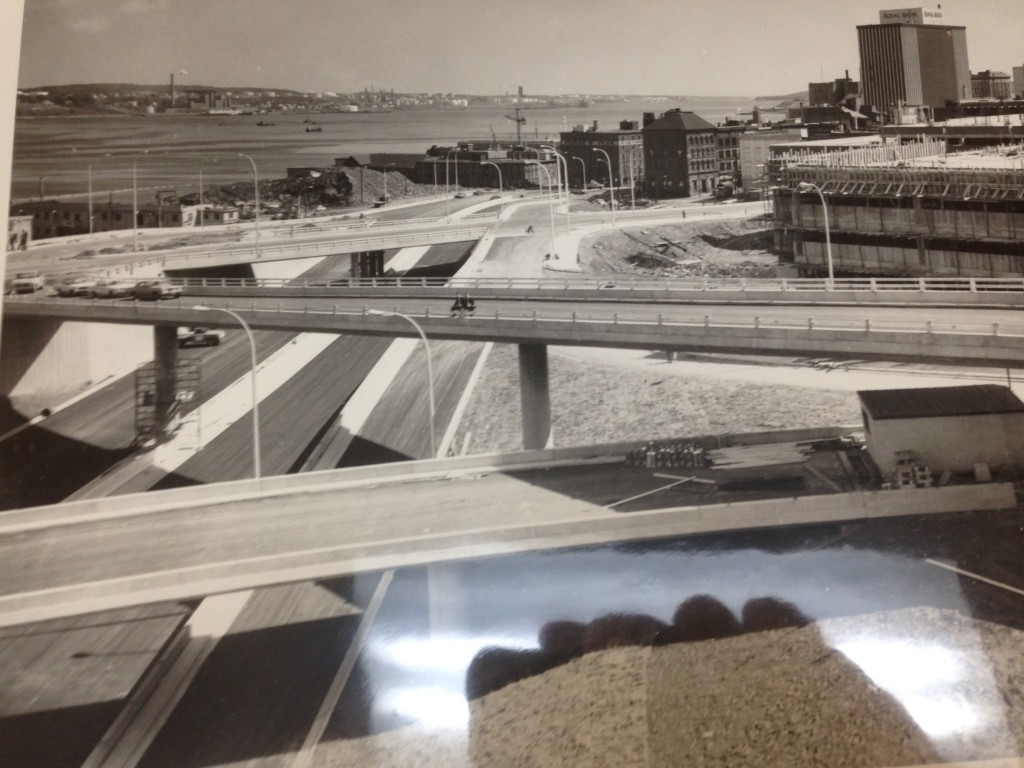