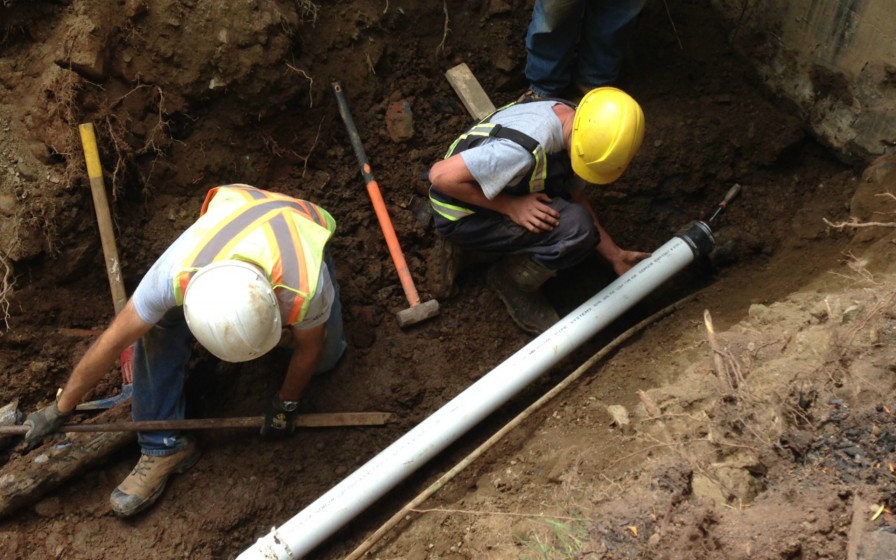 2 weeks ago, a critical piece of my houses infrastructure failed. I got a flooded basement, and my insurance company got a claim.

If your house was built prior to 1976, your sewer lateral is likely at the end of its serviceable life, and is in need of replacement. Between about 1956 and 1976, sewer laterals – that is the pipe that runs from your house, to the pipe in the street were constructed of a pipe known as No-Corrode.

No-Corrode was originally developed around the turn of the century for use as an electrical conduit.  The pipes construction varies, but it basically consists of layers of a fibrous material impregnated with coal tar. The conduit was buried, noticed that it held up well in the ground, and began to be used for Sewer drains during the postwar housing boom. No-Corrode has many of the advantages of modern PVC pipe – its easy to cut and handle, and it doesn’t fail due to rust, nor is it brittle like clay that preceded it.

The flaw with no corrode however, is that it de-laminates from the inside. This causes bubbles to form, and like Plack in your arteries, makes them prone to clogging. and when it clogs, you get water in your basement.

The City of Halifax identified No-Corrode pipe as an issue in 2005, and has actively been replacing their portion of the Lateral as they do work in the streets. Mine was done in 2008. The city is responsible for the portion up to the shutoff in your lawn. Everything after that is up to you.

if your house was built after 1976 it probably has a PVC lateral and is fine. You can confirm this with Halifax Water, who has a lateral card describing the pipe. Sewer Lateral Card for my house.

In my case, the card is from 2008, and there are 3 kinds of pipe. The line at the bottom of the drawing is the sewer in the street. Coming off that is PVC, which transitions HBPL (A Flexible pipe, that was installed via horizontal drilling so as not to disturb a tree) and finally the No-Corrode.

If you have Something other then PVC, you should hire someone to do a video inspection of the pipe. this will give you an idea of how bad the issue is, and if you need to do something about it. Get the Video on DVD – Halifax water will want to see it if there portion of the line is No-corrode. They may replace it at the same time, as you do yours. the new lateral in place. you can see the old no-corrode pipe to the left. it was cut in pieces with a spade.

Your options for replacement are 2 fold; you can have your yard dug up and the pipe replaced, or you may be able to have it lined with a fiberglass liner. I elected to dig.