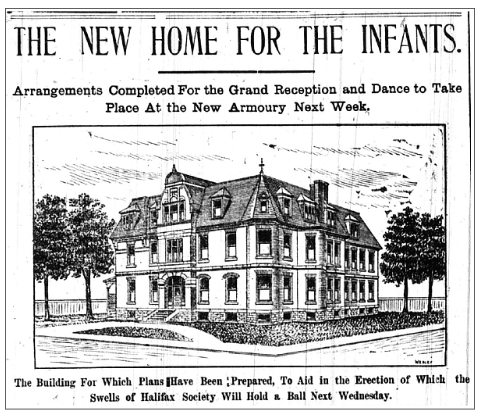 The Halifax Infants Home, now known as Bethany House, is located at 980 Tower Road, on the corner of Inglis St. It was built to accommodate the Halifax Infants Home (from 1900 – 1959) and subsequently sold to the Salvation Army, who ran it as the Bethany Home for unwed mothers and their children (from 1960 – 1998). The house was purchased by Saint Mary’s University in 1998, the building has accommodated educational uses.

It was designed by J. C. Dumaresq for the Infants Home, and replaced an older structure on the site. Done in the Second Empire Style, the Home features unique tower like features along the Inglis Street facade. (Above) Article pre constrution, Halifax Morning chronical, June 19 1899, Incidently, the Ball they mention was held in the (then) brand New Halifax Drill Hall

Interestingly, this new home, replaced Belvidere House, also located on this site. At the time, Heritage advocates were arguing in favor of Saving Belvidere House, for its historical status as one of the oldest buildings in Halifax. It was demolished due to wear and needed repairs.

For a more Complete History of the Site, see http://www.smu.ca/webfiles/BelvidereHistoricalProfile.pdf