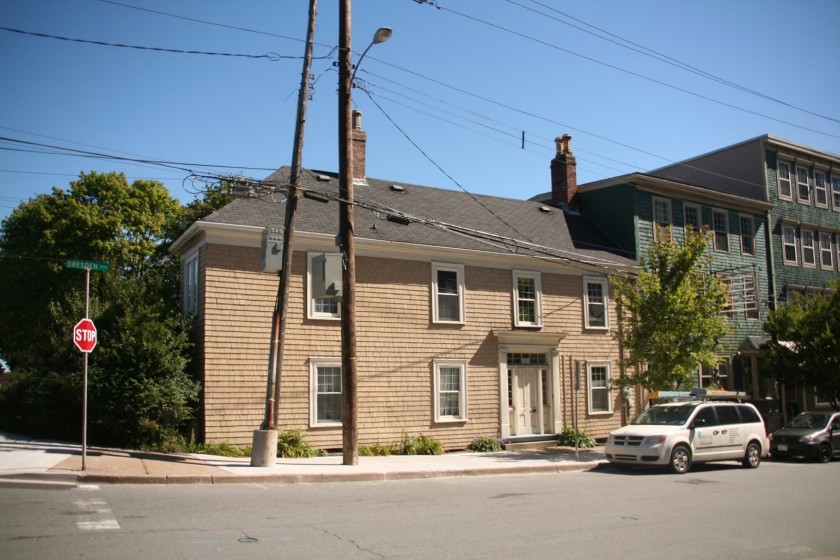 September 17, 2013 BuiltHalifax
Located on the lot bounded by Queen,B Sackville and Dresden row, Bollard House is uniquely shaped. Built in c.1840, with an addition c.1865, Bollard House is a Provincially registered heritage Property.

from the register of historic places:

The Bollard House is a two storey, wood frame structure, with a five sided plan and both a hipped and a gable roof. The house was originally built in the Colonial style but was transformed when a triangular section was added to the building.B

Character-defining elements of the Bollard House include:
– two-storey wood frame structure with wood shingle cladding;
– five-sided plan with a hipped roof at the north, which continues as a simple gable;
– narrow double doors, each with two panels;
– narrow entrance foyer, with the transom and sidelights repeated in the entrance to the interior of the house.
Character-defining elements of the Colonial Style of the Bollard House include:
– Dresden Row entrance surmounted by plain, un-bracketed entablature supported by Doric pilasters with capitals;
– transom window and sidelights at both entrances on the original part of the house and transom above the entrance on the addition;
– two chimneys, placed at either end of the original house;
– nine-over-nine windows on the original section of the house. Recently Concern was brought up that heritage markers were removed. Also a Contractors Sign was seen on the back door. I have contacted the contractor to find out what the plans are, however they appear to have extensive experience renovating period buildings, including have done work on the citadel for Parks Canada. If i had to guess, the building was due for some maintenance

UPDATE, From the Contractor:

A car drove into the wall and window on the south end of the house, Queen Street side. The structure has to be repaired and the window replaced.
Also we are replacing the doors on the Queen Street side, which have rotted extensively.
As there are difficulties with the insurance company, I have to proceed slowly as some of the work was unanticipated, and unbudgeted.B B