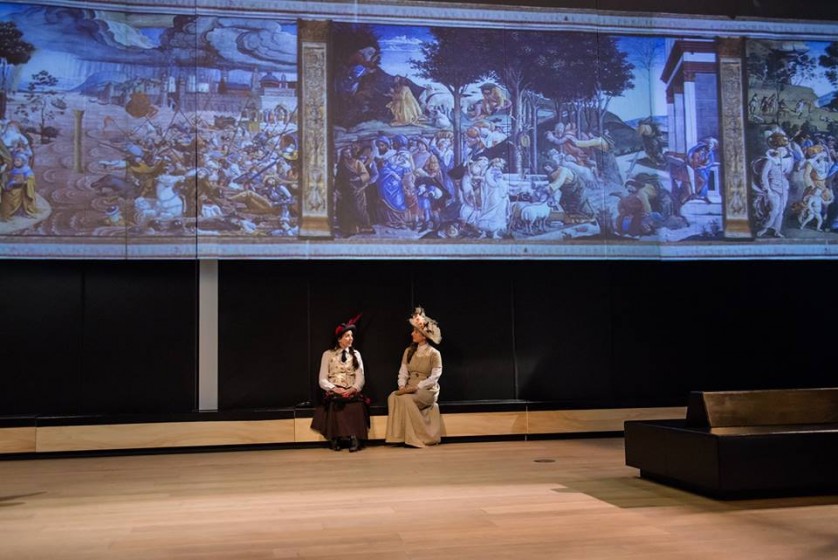 2b Theatre’s Unconscious at the Sistine Chapel, by Michael MacKenzie and directed by Anthony Black, centres around a chance meeting between avant-garde novelist James Joyce (Tom Lute) and Doctor Sigmund Freud (Marcel Jeannin). The two are visiting the chapel with Joyce’s pregnant wife Nora (Rebecca Parent) and Freudian sister-in-law Minna (Rosa Labordé).  A contemporary story-line intertwines with the historical setting, following a modern digital entrepreneur and her sordid power-play relationship with a young archivist.

As a general rule I don’t think one needs to intellectually understand a piece of art to feel emotionally moved by it. However, more times than I liked I found myself feeling grateful I did a year of philosophy in university, and took home a bunch of As in my literature and classics courses before I dropped out to have a baby. I can only imagine how much more enjoyable my night at the theatre would have been if I had stuck around long enough to study Joyce! I don’t mean to say I couldn’t understand the point — the excitement of this chance meeting between influential men is clear, and I understood the stakes and tension between the  modern characters — but it seemed that their hearts and spirits, particularly in the contemporary timeline, were a dramaturgical afterthought.

The writing proved full of passion for the lives of the historical giants, but not a lot was left over for the emotional humanity of the characters. I intellectually grasped the sentiment and stakes, however they did not truly land in my soul and cause a stir. Not everyone goes to see plays for this reason, I guess, but it is personally my favourite reason. Get me in the guts.

As with any 2b show there was plenty of exceptional work to relish in. Designer Daniel Oulton used computer magic to transform our beloved library into the freaking Sistine Chapel (!!!) and his set-change-projections are amazing to behold.  At intermission, audience members strolled onto the stage and took in the art, transported to a fabulous gallery without leaving the area code. Rebecca Parent gives an engaging and electrifying performance as Nora, some of the most fearless and fun work I’ve seen onstage recently. There is great joy in Lute’s Joyce and his attempt to mess with Doctor Freud, and an Artificial Intelligence assistant whom I felt great affection for (may we all be forced to consume more female authors, human or robot, who’s with me?!).

What I was looking forward to the most, which I feel could have been far more explicit and radical, was a story about the brilliant unspoken women behind their genius male counterparts. Mina and Nora’s influence were outwardly discussed by the present-day characters, but that only left me craving a bolder exploration of this highly probable proposal. Perhaps, once again, my own feminist expectations misinterpreted the publicity material and I ended up watching something different than what I had hoped to be taking in. I guess if I look closely at the press release I was only promised an “introduction” to the women….my question now is: who is going to write a daring sequel and show me what these lady geniuses were truly (imaginatively?) up to?

2b is an extremely important presence in our theatre and arts world, and I am inspired by the community and student outreach they do — hosting discussion series, programming affordable workshops, and (correct me if I’m wrong) the city’s only emerging artist residency.  They’re also offering free tickets to the show for those unable to purchase a ticket. Whether it’s to my exact taste or not, their shows constantly raise the bar for anyone making theatre in Halifax and their inventive nature and longevity is always worth checking out.