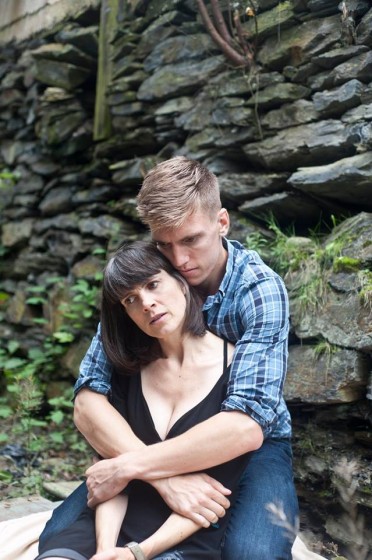 Leaving Wonderland, a new play by Shelley Thompson produced by LunaSea Theatre, was just one of those plays I went to with vivid expectations and left feeling slightly let-down.

I went in to the show knowing that Thompson plans on adapting it into a screenplay, and was already feeling a bit uneasy about that. Having a brand new play be described as “cinematic” and “sexy” isn’t exactly to my taste.  One of the best things about live theatre is that you don’t have to be a smokeshow to do it.  The people on stage look human, and humans are far more interesting than the Hollywood notion of “sexy.”

Still, I was as usual excited to see LunaSea’s work as they’re masterful artists, humans I love, and champions of female stories.

I was also looking forward to delving into such a potentially difficult and morally stimulating plot: An esteemed poet and professor, Jane, grieving over the loss of her son from alcohol poisoning, begins an affair with Rob, one of her young students.  As the show unfolds, we learn that Rob’s mother was out of the picture for most of his childhood, making the dynamic between him and Jane even more electric and peculiar.

I don’t know if I was just expecting a grittier exploration of their problematic romance and in having an expectation missed out…or if perhaps the playwright does not utilize all they can from Jane and Rob’s situation.  I’m not saying the subject matter isn’t complicated or challenging…but for a pairing that seems so taboo, and with the uncanny connection between loss of their family members, Jane and Rob’s romance is presented as a little too sleek, dare I say too “sexy” to satiate.  The scenes are so short, which seemed to keep the emotional depths from fully landing with both actors and myself in the audience.

Exception is found in both young students, Scott Baker as Dale and Adrian Shepherd-Grawinski’s Rob.  Shepard-Grawinski is exactly what we need more of onstage: being and not “acting.”  His performance is gracious, brave, and committed to each moment with richness and ease.

Above and beyond ANY of the above thoughts, which of course are just my own opinion and I encourage all of you to go to the show and come to your own conclusions while supporting new work and independent theatre….I think it’s worth mentioning two immense problematic threads in Thompson’s story.

If you don’t want to see some “spoilers,” scroll no further.  If you do read forward: Sexual violence / R* trigger warning:

First, a quick note:  it is time to retire the exhausted trope of  “lonely-gay-sidekick-in-love-with-straight-lead.”  The LGBTQ+ community needs representation onstage, onscreen, etcetera, but they do not need to be trapped in cliche, hetero-fantasy characters.  This is what my mom and her partner call “Gratuitous Lesbiansm,” and it doesn’t make them (or me or allies) feel super-awesome to see.

Okay, and secondly:  Writers need to stop using rape simply as a plot device to spice up their stories. It was extremely distressing to see sexual violence on stage (or at least blatantly insinuated).

The complexity of the rape (husband to wife) was not unpacked, and only there to add a touch of mystery to the play’s conclusion.  Writing sexual violence into a story, dropping the “r-bomb” onstage, and then not dealing with any of its collateral, is irresponsible.  Maybe not dealing with it is part of the character’s world, but what about the audience?  I had a really hard time moving forward from that scene, hoping for it to be dealt with, needing it to be dealt with, and I’m sure I won’t be the only woman who experiences that discomfort from my seat.  I was so…I don’t even know, dismayed?  Depressed? That once something so traumatic was introduced, it was not more explicitly dealt with.

Furthermore, it seemed that the rape was more about the desperation and downfall of Jane’s husband, making it about the perpetrator and not the victim.   Thompson gives all her characters their own individual journey, a feat in itself, but it is highly problematic when a rape-plotline serves the rapist’s journey and not the victim’s.

I look forward to seeing how Thompson’s story develops, as the Open Spaces production seems to be a pit-stop on the road to the Silver Screen. The premiere of new work is a tender time and I hope Leaving Wonderland settles into its structure for its next trip down the rabbit hole.