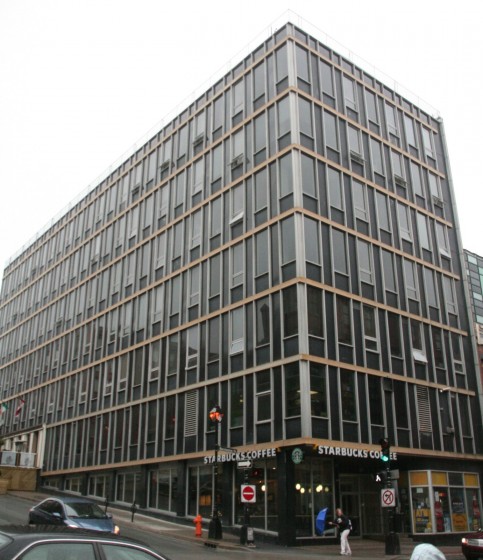 Canada Permanent Building, built in 1961-1962, Was designed by Charles A. Fowler and Jamie Macdonald. It is Significant because it was Halifax’ s First Completed Curtain Wall Structure.

A curtain wall is an exterior wall that is hung from the structure (Like a curtain) its only function is to keep the weather out. in other forms of building the walls have a structural function, even if it is to only hold themselves up. it is typically made up of glass and metal panels.

The Previous Canada Permanent Trust headquarters was destroyed by fire. Though the client preferred a more tradional 3 story masonry building however the site was constrained, as the ajoining lots were unavailable. Fowler was able to convince them that the site called for a more slender lighter approach, and produced a 7 story International Style building.

Canada Permanent Trusts buildings in Toronto and Edmonton are both masonry construction (though also older) The new Style Building Fit with the expansion of services trust companies were begining to offer, and brought the company into the modern era. The Press at the time considered the building to be “an Ultra Modern Structure”

Given the slope to the site, a 2 story pentagonal atrium was built with a sculptural terrazzo stair to connect the Argyle and Barrington Street entrances. The  bank Entrance was located on Barrington, and the trust company offices off Argyle. Most of this has been lost, though a portion is still visible off Barrington Street, and in the floor of the Starbucks. Canada Permanent Trust merged with Canada Trust, and was eventually acquired by the Toronto Dominion Bank. The building now houses a Starbucks and Convenience store on Barrington Street, An Irish pub off Argyle, and the remaining 5 floors are residential. Since built, the Barrington Lobby has been destroyed,  and the Sun Screens have been removed from the Sackville street windows. Window washing rails have been removed, and the porcelain enamel panels have been painted black.