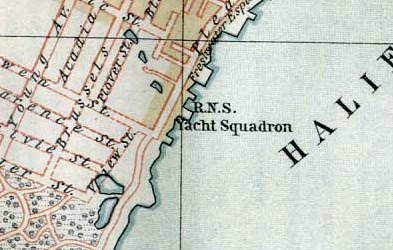 Summer Club House for the “Royal Nova Scotia Yacht Squadron,” Halifax, Designed by the firm of Edward & Webster of Toronto. From Canadian Architect and Builder 1889, Issue 9:

This little building, though intendeded for summer use only, is very substanially built. the material is frame on foundation of brick piers. the exterior walls are covered with stained shingles laid in Straight lines 3 1/2 inces to the weather. this gives a more quiet and architectural effect then where the shingles are cut as has been fasion of late years. The color of the walls is brick red, and that of the roof sea green. The trimmings are yellow and green, and the window sash white. Inside the walls are lined with clear pine and varnished.

The Entrance faces the street, as the view is taken from the water front, very little of the porch is seen in the sketch. The club room occupies two-thirds of the first floor of the building and opens on the balcony. there is a large brick fireplace with built in sets, etc. The windows of this room are filled with Amber tinted, wrinkled glass. there is also a secretarys office and locker room on this floor. the ground floor contains lavatories and a large store room. The Janitor is well provided for in the attic.

In 1887 the Club was located at the foot of Hanover street, however they were forced to move, due to the construction of the Halifax Graving Dock. (Above) Hopkins Atlas of Halifax Showing Location of the Yacht Club 1887 (Below) Photo of the Yacht clubs North End Location. Their next location was in the south end, where the current ocean terminals now stand. They are shown in this location in a map of Halifax from 1894, and is where the  Summer Club house was built. (Above) The Yacht Squadron as the Ocean Terminals are constructed around them. (Below) The Clubhouse earlier in life. The construction of the Ocean terminals would cause the club to finally move to its current home in the North West Arm.