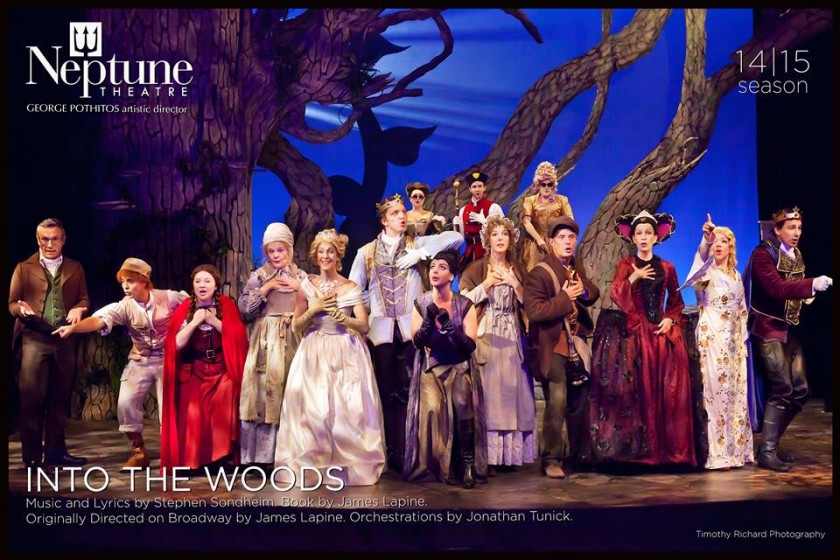 INTO THE WOODS is my favorite thing.

I’ve seen two live performances, mentored young actors when Neptune Theatre School produced the “junior” version in 2012, have watched the dvd of the original Broadway cast over 10 times, listened to that same cast recording every single day of tenth grade and a million more time in the last decade.  Yep.  A decade of unwavering obsession.  A decade of reclaiming the the allegorical tales as metaphors for my own life –“into the woods each time you go/there’s more to learn of what you know!”

But enough about me, Halifax! Why should YOU go see Neptune’s production?  Here’s ten good reasons;

It’s Conceptually Genius
The magical musical premiered on Broadway in 1988 and earned composer Stephen Sondheim and librettist James Lapine Tony Awards for best score and best book.  Imagine if the adventures of your favorite fairy tale characters happened on the same night.  In the same kingdom.  And they all MET each other and played a part in each others’ story!  THE BEST.  That’s essentially what Act One of Into the Woods is.  Act Two is set “later,” once everyone’s wishes have come true.  Everyone is left to deal with the consequences and responsibilities of getting what they want.  The Giant who Jack (of beanstalk fame) killed?  He had a wife, and she’s come to seek revenge.  We learn that Cinderella’s Prince is a doggedly womanizer.  Rapunzel has a serious case of PTSD.  It’s the dark side of ‘happily ever after.’  The premise is irresistible.

You Are In This Musical
Using fairy tales as the story’s ground work means facing some bold archetypes, but the beauty of Sondheim’s lyrics and Lapine’s take on the characters are so detailed, so gorgeous, it’s impossible not to see yourself in a character (or two).  The show is an exercise in morality, where the woods forces its inhabitants to take bold action and lose their sense of self in honour of finding out who they truly are.

Dat Sondheim Doe
Aside from the lyrical mastery of juicy Sondheim rhymes (Jack’s mother sings of their cow “we’ve no time to sit and dither/while her withers wither with her,” I mean come on!!), there is Into the Woods’ orchestration itself.  This is a musical that musicians fall for.  Music tells the story as much as the words do. I don’t know how to read music, nor do I play an instrument, but I know Jack sings deep low notes in his ‘discovery’ anthem “There Are Giant in the Sky” as a way of portraying his growth and development into manhood.  Much like Little Red Riding Hood’s post-wolf “I Know Things Now,” where she breaks from her nasally cartoon squeak and hits high notes in a full womanly voice.  The music implies and supports character development. Nothing is arbitrary. It’s a feast.

The Play’s The Thing
This is a musical non-musical fans can get onboard with. The book is as sharp and meaningful as the music.  Not a single jazz-hand is waved.  Not a single fan-kick is thrown above a bendy person’s head.  There’s literary idioms!  It’s actually perfect.

“On The Steps of the Palace”
Neptune’s Cinderella, Elodie Gillett, is an unstoppable example of how to ‘act‘ a song.  While most audience members don’t see musical theatre for its fine fine acting, an exception can be made for Gillet.  Her choices as Cinders are interesting and imaginative, intelligent and often hilarious. Her take on the musically convoluted “On the Steps of the Palace” is a moment of standout story-telling.  The sheet music calls for an allegretto grazioso feeling, or as Google translated for me, “fairly fast and graceful.”  Gillet is both.  AND she’s smart and funny and completely in the moment.  All while spitting chewy Sondheim rhymes in 6/8 time easy as pie.

“Two Princes…each more handsome than the next!”
Did you know Cinderella’s Prince and Rapunzel’s Prince are brothers? Well in Into the Woods, they are. They are dreamboat asshole comedy gold. Legend has it every time their duet is performed, from wherever he is, Sondheim whispers “you’re welcome.”

The Woods
The Fountain Hall stage is looking mighty fine.  Geofrey Dinwiddle’s forest is clear and concise but maintains the mysticism of a fairy tale world.  The set is in harmony with the story’s action — it never pulls focus nor does it come up short.  His notes in the program tentatively suggest the woods “may possibly” be another character in the show.  I say be bold, Dinwiddle! It IS another character, and she’s bewitching.

Locally Sourced Step-Sisters
Kirstin Howell and Ann Doyle as the wicked step-sisters are exquisite.  They’re at once gigantic presences and subtle comedians, completely alive in their own evil world.   BONUS — they’re Haligonians!  Paired with Marty Burt, Margot Sampson and Karen Myatt, that’s a whole 33.3% of the Into the Woods cast plucked from Neptune’s own backyard.  Support Local!

Sara-Jeanne Hosie
There are two characters James Lapine created for the musical not plucked from pre-existing fairy tales; The Baker and his wife.  Let me tell you, a character called The Baker’s Wife isn’t as faceless and man-reliant as she sounds (hashtage feminism). In fact, The Wife is arguably the smartest character on the stage and the role is one of musical theatre’s most coveted. There are few things more satisfying than a dreamy Baker’s Wife….and Sarah-Jeanne Hosie is mega-dreamy.  Sondheim says he prefers “actors who sing to singers who act,” and Hosie is electrically earnest in and out of the musical numbers.  Come for her exquisite voice, stay for her dynamic embodiment of a legendary role.

So maybe I’m biased because Into the Woods is my favorite thing.  But I can also tell you that when you love something so much and know it so well, it’s just as easy to be disappointed. And I wasn’t disappointed. I was enthralled and surprised and heard lines and made connections I had never heard or made before. The show still meant something new and special to me. So that’s why you, Halifax, whether you love or know nothing of Into The Woods, should head to Neptune and let the show lead you through your own personal forest.