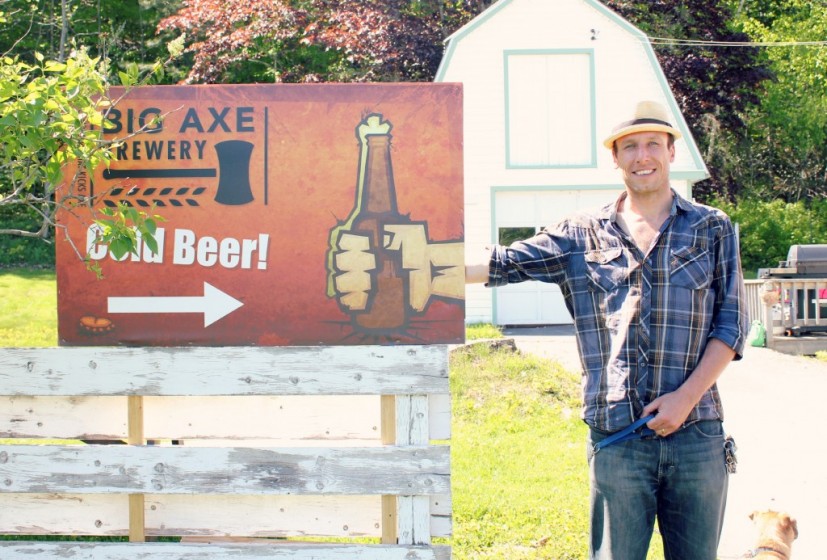 Sea caves, seafood, ziplining, craft beer, the world’s largest axe, breathtaking natural sights and hikes, and adorable farmers’ markets. With summer officially underway, and the first long weekend of summer 2015 in front of us, it’s prime time for an adventure.  Any of these eight would make for a great day or weekend adventure, all eight have the makings of an epic, memorable summer.

Did we miss one of your favourite stops? Let us know about it in the comments so we can check it out on our next NB adventure! 1. Beaches and Boulangeries:Shediac is the perfect place for a beach retreat. Located along the Northumberland Strait, it boasts some of the warmest ocean waters in Canada. On the way there (or back), snap a selfie with the world’s largest lobster. Shediac is the lobster capital of the world, so be sure to crack into one (or two) while there. However, it’s far from the only great food you’ll find in Shediac. Stop into Adorable for an espresso and hand crafted chocolates (like strawberry basil), to Boulangerie for beautiful French bread, pastries, and picnicables, or dine at the posh French inn, Maison Tait.Where to Sleep: Maison Tait Walk or bike the water trails. There are more than 85 km of non-motorized trails that stretch around the river in Fredericton. The trails will take you past a lot of cool stuff. Say hello to Dali at the Beaverbank Gallery, view one of the finest examples of Gothic architecture in North America at the Christ Church Cathedral, take a dip and a bite at The Dip poolside restaurant at The Delta Fredericton, and explore Government House. This National Historic Site was where most of the important decisions affecting New Brunswick were debated between 1828 to Confederation. It also feels like walking onto the set of Downton Abbey. Shop the boutiques downtown, read the Whiskey Bible at The Lunar Rogue, grab a growler for later at Picaroons Brewtique, and go for a picnic in Officer’s Square. Snap and share your favourite stops as you go – Fredericton was one of the first cities in Canada to offer free city-wide WiFi. There’s a lot of other free things to see and do in Fredericton. See 39 more here.Where to Sleep:The Quartermain House (ranked best B&B in North America in 2013 & 2014 by Booking.com). Think three-course breakfast, goodbye truffles, pashminas & umbrellas at the door, and an inspirational and kind host.  Travelling with pets? Opt for the extremely pet friendly and ultra cozy Delta Fredericton. 3. Family Fun and Drool-worthy Food:Float down the lazy River then splash through the many slides and pools at Magic Mountain, then scoot next door to Magnetic Hill Zoo and say hello to the more than 400 animal residents of the largest zoo in Atlantic Canada. Pay a small fee to experience the odd phenomenon of Magnetic Hill, a road that will seemingly pull your car uphill and where the water appears to run uphill, as well (a natural optical illusion). Head to Resurgo Place where you’ll be so busy playing you won’t realize you’re learning (you too, adults!). This is a must-see museum with oodles of hands-on exhibits that let you build, race, shoot, soar, and more! Refuel on boar poutine at Tide and Boar, the epic brunch and ever-changing always-dreamy plates at Manuka, or espresso, craft beer and small plates at Marky’s Laundromat, which still looks like an ACTUAL laundromat. Really. Keep your eyes peeled. Finish with a sunset stroll along the Petitcodiac River. 4. Art, History, and Food:
Start with a free walking tour. The city of Saint John has put together self-guided tour maps of the cool public art and historic sites around the city. Visit the City Market. It’s the oldest common-law market in Canada and has been in continuous use since 1876! Next, walk the harbourside trails, and, if you’re up for it, take them all the way to Reversing Falls, where you can watch as the powerful Fundy Tide reverses the flow of the Saint John River. If you’re feeling adventurous, soar over top of the falls by zipline.

Where to Sleep: Chipman Hill Suites 5. Chocolate, Flowers, and Day Spas:Start in Saint Stephen, the chocolate capital of Canada and eat your way through a history of chocolate at The Chocolate Museum, where exhibits are paired with truffles and sweets. In August, the town plays host to a chocolate fest, an especially great time to go. Next, head to Saint Andrews, a century-old resort town whose seaside shops, gardens and historic sites will steal your heart. Shop the market and the artisan shops, and walk through Centennial Park. There’s a National Historic Site right along this stretch, too, The Saint Andrew’s Blockhouse, preserved to commemorate its defensive role in the War of 1812.For more garden tourism, check out the award winning Kingsbrae gardens, then head to Chance Harbour Spa, Atlantic Canada’s only nordic thermal spa. A $40 day fee gets you access to their wood-fired Finland sauna, steam room, hot pool, and hiking trails. There’s a waterfall on site, or join the polar club by taking a dip into the fresh water pond by the waterfall in the waters of the Bay of Fundy! Where to Sleep:The Algonquin Resort 6. Sea Caves, Pillars, and Statues:
Plan to visit St. Martins at low tide. The St. Martins Sea Caves are natural caves carved into 250 million year-old rocks by the powerful Fundy tides. You can only access the caves for a few hours each day, and they are worth the trip. From there, head along the road to Sussex and look for this odd statue along the side of the road.  Canada’s known for oversized roadside statues and Sussex was once home to “Animal Land”, a sculpture park. Now closed, you can still see the remnants, and many of the statues still stand. Many were carved by the late Winston Bronnum, who created some of the better known giant statues in Canada. The rest of this route is all about nature and try-to-keep-your-eyes-on-the-road views. Explore the vast network of nature trails in Fundy National Park then head to Alma to experience the famed Hopewell Rocks, pillars carved out of a mountain chain older than the Appalachians by the powerful Fundy tides. Refuel with your fill of lobster and scallops in the darling town of Alma. 7. Ziplining, Chips, and Giant Axes:
Start at Mactaquac Provincial Park and explore the stunning nature trails by foot or by air – you can swing through trees and over rivers at the TreeGo adventure course located in the park. From there, head to Kings Landing Historical Settlement, and step back in time to 1800’s New Brunswick. Try your hand at butter making, wool spinning, nail forging, and wood splitting, all led by interpreters in period costume. Head to Nackawic, home of the world’s biggest Axe. Snap a selfie then head just down the road to Big Axe Brewery and B&B and grab a growler of chanterelle cream ale or one of their other unique craft offerings for later.

Head north (about 30 minutes by car) to find the world’s longest covered bridge. It is still in use today. Around the corner there is a chip factory named after the famed bridge. Take a tour and try your hand at making your own flavour. You’ll want to bring some pocket change along to pick up a few bags for the road – Covered Bridge make truly exceptional chips in more than 30 flavours.

Where to Sleep:
Stay overnight at Big Axe Brewery, it’s also a cute, comfy B&B, or head back to Mactaquac Provincial Park and camp or stay in a rustic shelter. 8. Craft Beer and Waterfalls:Start at the New Brunswick botanical gardens (a magical stop you won’t want to miss) then head into downtown Edmunston and sip some locally brewed Petit Sault craft beer paired with a ploye, a thin pancake made with buckwheat that’s traditionally topped with butter, molasses, sugar or maple syrup.

There’s a lot going on for nature lovers here. Rent a bike and explore some of the 134 km of trails, accessible two minutes from the downtown, rent a kayak or canoe and explore the Madawaska River. Head to Saint-Basile and float down an old logging river (Riviére Verte) in a tube, an ultimate, all natural lazy river experience. You can also opt to kayak or canoe if that is more your style. Finally, head to nearby Grand Falls, which boasts one of New Brunswick’s finest waterfalls right in the centre of town. Explore it on foot, take a pontoon boat for an up-close look, or depell right into the gorge.

Where to Sleep:
The Four Points Edmundston. It’s within walking distance to the market and many other Edmundston attractions, plus there’s an awesome on-site restaurant serving up local beer and food. We loved the little pops of odd decor like cogs and wheels, but the rooms were modern, cozy, and welcoming of dogs (and birds!).

Other BIG Attractions:
I mentioned a few giant statues in this post, but there are many more spread across New Brunswick. You could easily plan an itinerary across the province based around stops like the world’s largest potato. In writing this post, I found a really great blog post written by an NB local on giant statues which you can read HERE.

Our most recent trip to NB was made possible with financial support from New Brunswick Tourism. We selected our favourite NB adventures from the past three years for this post and can’t wait to get back to add even more finds to this list!