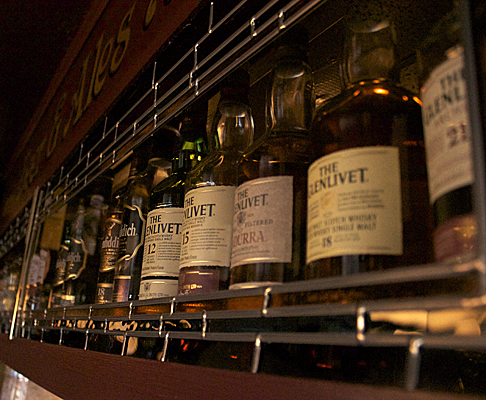 My employer talked a lot about other whisky greats in the area, and Frank Scott’s name came up a lot.  Frank runs The Lunar Rogue (@TheLunarRogue), Fredericton’s oldest pub. It is also home to one of the largest collections of whiskey in the world, with more than 420 selections lining their shelves (500 by the end of the year). In its 24 years in business Lunar Rogue has become a favourite for both locals and visitors and has received numerous awards, most recently “Best Pub of the Year” and “Best Patio of the Year” by HERE magazine. One look around the bar and you understand why. It is a traditional maritime pub with large cozy booths, an expansive dark wood bar and bottles of whiskey everywhere. But perhaps what is most impressive is the stained glass. Both the exterior windows and booth dividers are made with intricate stained glass depicting things from the namesake of the bar to classy beer advertisements for the many brews on tap. It is impossible to tell the story of the Lunar Rogue without a detailed account of its owner. He is the third generation in his family to work in the liquor industry, opening his first bar in 1977 when he was just out of school. The pub was a big success bringing in acts like John Allan Cameron and the Cheiftans and hosted Stan Rogers’ first Atlantic Canadian gig. It was voted the “Best Folk Spot in Canada” by the CBC. Despite its success, they sold the place in 1979.  Frank says that first place taught him how to do everything wrong. “We partied every night, I learned how to not run a bar, drink, stay late, party with customers.” A smelling kit used to train nosing for whisky

Whisky came a little less naturally to him. He didn’t like whisky growing up, but when he met his now wife on a trip to Scotland, that all changed. He started traveling to Scotland more and more to visit her. On those holidays, they would get in a car and head North until they found something interesting. “There were sheep and there were distilleries,” he said.  “I chose to see the distilleries.”

At the time, the distilleries were not really open for public tours. They happened across Glen Fiddich and despite a sign that said no visitors, Frank went and knocked at the door to ask for a look around.  From there, they just kept going, taking in over 80 distilleries in Scotland. After trying so many whiskys and meeting the distillers behind them, his passion was born.  Today, his personal collection has more than 800 bottles.

He is an active member of the local community, and a well respected voice in the international market. In addition to running the Lunar Rogue he is the past president of the Fredericton Highland Games, and Chairman of the NB Osiris Festival, the oldest spirit festival in Canada. He frequently travels to Scotland to give lectures, and has been across North America providing whisky education. After 24 years in business the Lunar Rogue shows no signs of slowing down. The bar is packed year-round, and even after a recent expansion it is still hard to get a seat on their patio. but despite all of the personal and professional success, Frank stays humble. “Reputation is fluid.  You are only as good as the last meal you serve or the last pint you pull,” he said.

For Frank, at the end of the day, it is about creating great jobs and providing superior service. “Every 5 new tables is a university student with a job,” he said. He makes it clear that school comes first, work second. But he also believes that food and beverage is a great profession, one he would like to see get more recognition.

You’ll see the names of regulars around the bar, marking their favourite spot to sit.

Of the 420 whiskys at The Lunar Rogue, the oldest are 33 and 38. As for price, whiskys start at a palatable $4.50 an ounce, with the most expensive ringing in at $139 an ounce. His collection is chronicled in what he calls his Whiskey Bible, an extensive list of each whisky in the bat along with his tasting notes. You can check out parts of a digital version of the “bible” here. Not into whisky? The Lunar Rogue has a great selection of beer, including local craft options from Picaroons. Lunar Rogue has been serving Picaroons on tap for many years. In 2014, they’ll carry an exclusive series of seasonal draught beers from Picaroons in celebration of Lunar Rogues 25th anniversary. They also serve a large menu of tasty pub fare. It is the perfect spot to spend an evening over beer and nachos with friends, or celebrate a special occasion with a whisky or two.