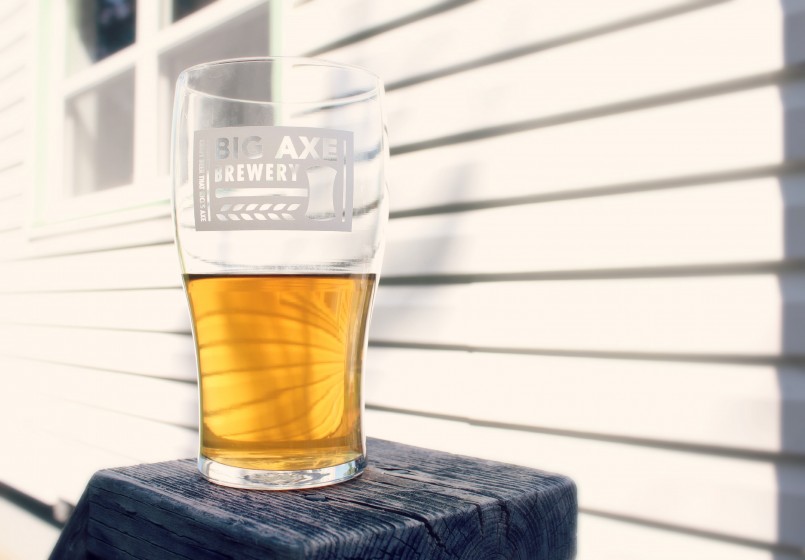 Ten years ago I spent a lot of time driving back and forth between Nova Scotia and northern Maine. This was before the Trans-Canada was twinned west of Fredericton, so I used to see the “World’s Biggest Axe” roadside attraction as I wound my way along the old highway that ran parallel to the St. John River.

You can no longer see Nackawic from the highway, but there’s more reason to take the exit here than a novelty selfie of your best Paul Bunyon impression. Early in 2014, Big Axe Brewing joined the growing ranks of New Brunswick nanobreweries. Located right along the banks of the St. John River, you couldn’t ask for a prettier place to pick up some ale. In fact, you might just find it so pretty you want to stay to enjoy a pint or two on the deck. Owners Peter and Tatiana Cole thought of this, and will soon have a license to serve by the pint.

We were greeted by their dog (and mascot) Shakespeare who gave us a friendly once over before welcoming us in to try some beer. For a new nanobrewery, there’s already a nice selection of ales to choose from to enjoy. Big Axe’s first beer was a Chanterelle Cream Ale. The idea came from a foraging lesson Tatiana took. She is from Eastern Europe, where chanterelles are very popular, and it was an obvious choice to experiment in a brew. The result is a nice, mild, refreshing ale that will please anyone from people used to commercial beer to craft beer enthusiasts. There is also the Two Bit IPA (named after the double bit axe). It has a nice aroma, nothing too intimidating and you really get the Chinook in both the aroma and the flavour. Peter has expanded the selection with their Shakesbeer chocolate oatmeal stout (my favourite of the four) and a maple wheat amber ale that was made with sap from the trees on their own property, rather than with syrup or extract. This means it’s less sugary than you might expect, with a delightful hit of maple at the end.

We opted for a growler to go, but if you’re in the mood to stay for an extra pint, Big Axe also happens to be a Bed & Breakfast. The B&B is set in the former residence of the original owners of the  old Nackawic saw mill. Peter and Tatiana have done an excellent job turning the historic space into three bright, beautiful rooms, two with their own private sunroom overlooking the river. Gillian especially loved the little breakfast nooks, and the former mill doors re-purposed into headboards. And while Nackawic seems, at first glance, to be off the beaten track, it is right in the heart of some amazing adventures. They’re just 15 minutes from Kings Landing, 20 minutes from Crabbe Mountain, and provincial four wheeler and cross country ski trails are accessible from the back yard of the B&B. Because they’re right on the Saint John River, you can even arrive by boat if you feel so inclined. We went with the IPA, after much deliberation. When we come back, Gillian says she isn’t leaving without one of the Big Axe tees, adorned with none other than a very dashing looking Shakespeare. Season: Both the B&B and the brewery are open year-round