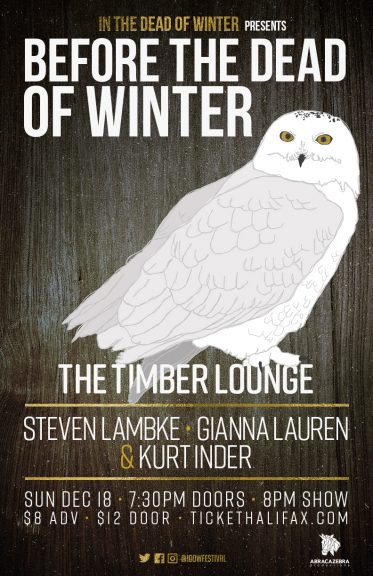 (Halifax, NS) – Like the calm before the storm, there is the show “Before the Dead Of Winter.” At the In The Dead Of Winter (IDOW) Society we like to think of the coldest and darkest winter months as romantic, heart warming, and the best time to cozy up with pals beside the fiery timbers. It is in that spirit that IDOW is hosting “Before the Dead Of Winter,” with IDOW alumni Steve Lambke and Gianna Lauren, and one of IDOW’s 2017 Emerging Spotlight artists, Kurt Inder, at Halifax’s coolest new venue The Timber Lounge, December 18, 2016.

In The Dead of Winter (IDOW) festival is an acoustic-based music festival held annually in Halifax, Nova Scotia, on the last weekend of January (January 19 – 22 2017), and in Wakefield, Quebec on the second weekend in February (February 5 – 7, 2017). The Halifax festival began in 2006 at the legendary Khyber Club with one small stage and eleven artists. The Wakefield festival began soon after, in 2009, at the Black Sheep Inn.

For all info on the festival you can head on over to  www.inthedeadofwinter.com