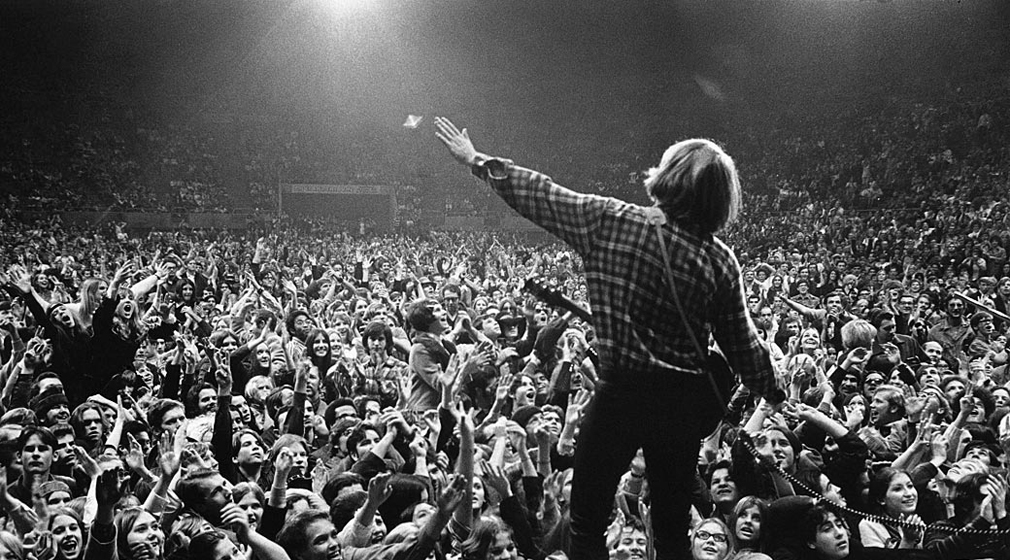 On Monday night, John Fogerty turned the inside of the newly named Scotiabank Centre into a 1969 love affair. Tie-dye patterns plastered the massive white screen, which doubled as a background for the show’s opening stills and cover for the main stage prior to the show. As two large monitors on each side of the stage played videos of Fogerty’s recollection of the year 1969, the stage was set for what was about to come.

With that classic John Fogerty stance and untucked plaid shirt, Fogerty spent the next two and a half hours blasting the subdued Halifax crowd (more on that later) with hit after hit after hit.   At one point I honestly wondered, at what point in the evening would we get to a song that was unrecognizable.

But it wasn’t just about the music that was being played, but also about the showmanship that Fogerty has perfected over the past 40 years. Running from stage left to stage right while shredding apart the neck of his guitar, CCR’s former front-man was energetic and engaged from start to finish. He also built the performance around 11 large video screens which showed close-up videos of the band (but mainly Fogerty) and psychedelic images helping to hammer home the vibe from 1969.  Streamers were blown from the rafters, pyrotechnics were blasted from the stage, fireworks were shot off and pinwheels twirled around on stage helping to create a performance that would have had most crowds chomping for more. But not Halifax.

No, Halifax, for some odd reason, decided that sitting for the show and displaying as little emotion as possible would be the best way to engage with Fogerty.  Hand clapping was reserved for when a song was done, not while a song was going on and standing up to dance, move around or simply get into “it” didn’t appear to be an option. It was about halfway through the set that I officially became baffled.

This show was not a good show, it was a great show. Fogerty might not be able to jump as high as he once could to signal the end of a song. He can still perform with the best of them. Fogerty doesn’t sound that much different from when he originally recorded these hits back in the late 60’s and from a musical perspective he can play guitar with anyone (which came as a massive surprise to me).  From chicken picking, to sweeping arpeggios Fogerty provided the lead in 98% of the songs on top of singing each one.  From “Proud Mary” to “Looking Out My Backdoor” to fan favourite “Long As I Can See The Light”, Fogerty left no stone unturned and still nothing more than applause afterward.

Sure, the majority of the crowd would remember hearing “Down On The Corner” coming through the local malt shop speakers, but it doesn’t mean they don’t know how to have a good time. I’ve been to many gatherings where people from that generation put what I considered partying to shame, yet I once again found myself at a show here on the East Coast, trying to figure out why it appeared that everyone in the crowd seemed as if they were more concerned what the person next to them thought, as opposed to just having a good time.

And finally after pulling out every stop you could think of (he even broke out the famous baseball bat guitar for “Centerfield”), Fogerty found himself standing on stage closing out the evening with arguably the most fitting song from 1969, “Fortunate Son”.

With a second shot of confetti (this time from the ground up)  and another round of pyrotechnics, Fogerty would send the subdued crowd out of the Scotiabank Centre and into the night, knowing full well that the show he had just put on should be listed as one of the top classic rock shows this city has ever been a part of. There was nothing more that this masterful artist could have done to make his performance any more engaging, and I hope that the capacity crowd is fully aware of what they have witnessed.

It isn’t very often that an artist can still be on top of his/her game forty years after the fact, but again it needs to be said. On November 10th, 2014 John Fogerty absolutely shook the walls of Halifax with one of the best classic rock shows I have ever had the pleasure of witnessing, but for some odd reason Halifax decided to not shake back.