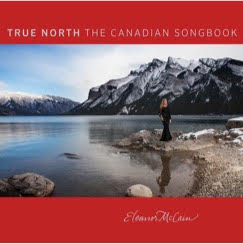 “Hallelujah is one of the most beloved songs in the history of recording. Some say it is perfect. Ironically, it was first rejected by Leonard Cohen’s recording company and it took at least a decade before it was noticed by anyone,” said McCain. “The song is so deeply personal, and for every listener and performer it means something different. The verses I chose for True North: The Canadian Songbook are the ones that resonate most with me, personally.”

“When I created the song list for this project, I wanted a cross section of genres and songs from across the country. Much has been said about The American Songbook but I feel we have our own incredible body of work, our own Canadian Songbook that we should celebrate, especially on the occasion of Canada’s 150th Anniversary of Confederation,” said McCain.

“It was a three year process of living with the songs from my original playlist, discussing and workshopping them with producer Don Breithaupt, and then editing the list to eventually settle on 32 songs that we thought suited this album,” said McCain, a classical crossover artist. “While I tried to be as diverse in the styles as I could be, I had to be mindful of choosing songs that match my style. Ultimately, this is an album that celebrates our rich heritage of song writing along with the incredible musicians who make them come to life. I hope this album inspires others to create their own Canadian Songbook.”

True North: The Canadian Songbook is now available for pre-order and will be on sale May 12, 2017.

McCain will be performing songs from True North: The Canadian Songbook with a number of orchestras in the upcoming year. Performances include the Winnipeg Symphony Orchestra as part of their Air Canada Pops series May 26-28, 2017, as well as evenings with the Kitchener-Waterloo Symphony Orchestra (Sept 29/30), the Niagara Symphony Orchestra (Oct 20-22) and Symphony Nova Scotia (Nov 4/5).

Eleanor can be found on all of the following social media sites.

About True North: The Canadian Songbook

Showcasing 32 of Canada’s most beloved pop and folk songs, True North: The Canadian Songbook is Eleanor McCain’s sixth studio album. Produced by Don Breithaupt and featuring the creations of 14 arrangers, 28 guest artists, and 10 symphony orchestras from across the country, True North: The Canadian Songbook was developed to celebrate Canada’s 150th birthday. In addition to the recording, there is an accompanying English/French hardcover coffee table book featuring fashion portraits in select Canadian locations by co-curator V. Tony Hauser, sumptuous full-colour landscape photography by 23 photographers from across Canada, complementary song lyrics, songwriter commentary, and behind-the-scenes shots by Greg Locke, along with a double CD insert. This epic, multi-year passion project is a touching tribute to the people, songwriters, musicians, photographers and landscape of Canada. Eleanor is joined on this project by a talented team of artists, performers, and industry experts all of whom worked passionately to bring this to fruition. An accompanying short documentary film will also be released. True North: The Canadian Songbook will be available for sale ‪May 12th, 2017 and can be purchased here and at www.EleanorMcCain.ca.