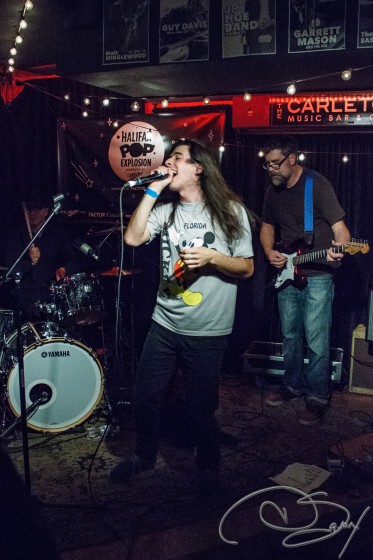 My first Pop Explosion in 2013 kicked off with a solid night of comedy and headliner Brian Poshen, so I opted to try my hand at the Eat Pray Lol show without being overly familiar with the lineup. From there we would see where the breeze would carry me.

I rolled into the the Company House around 7:15 and emcee Evarado Ramirez was on stage.  I found a spot at the back of the room and settled in to await my first chuckle. That chuckle didn’t happen for 15 minutes as Ramirez just didn’t hit my funny bone. I hoped for more from the evening’s comics. Steve Mackie was the first comic of the night and he looked a bit rough around the edges, but I held out hope that he would get this night on track.  Alas, this was not to be the case, Mackie’s set just felt forced.  His schtick comes off like a gruffer Ed the Sock fused with Red Green, which appealed to the chap in the back who boldly proclaimed that he was Mackie’s “homie”.  From a set that was loaded with non sequiturs, it barely generated a smattering of chuckles, but not a single person laughed (or over-laughed) as hard as Mackie’s #1 fan.  Thus far the night was 0-2, which had me wishing Evarado would get back on stage; it was apparent Mackie was not for me.

To say that my expectations had bottomed out, would have been an understatement. Fortunately, the third comic of the evening was PEI’s Meg Mackay (who now calls Toronto home), a comic who I loved when she opened for Brian Poshen at Reflections back in 2013.  Her style reminds me of Sarah Silverman as there’s a sweetness about her self-depreciating, autobiographical humour, which attempts to distract from the underlying message. She was funnier in 2 minutes than the previous two comics were for the duration of their sets, but it was her Murder Unicorn but that killed me, as I sat behind a row of them at my first Tragically Hip show.  At least the night is now 1-3. The last comic of the evening was headliner Nick Flanagan, who wasn’t bad, but I found him to only be moderately funny and somewhat awkward.  I took off partway through his set, as I had to make tracks for Psychic Fair over at The Carleton.  Meg suited my comedy tastes and she could have performed for another 30 min and I would have been fine with that.  Nick made me chuckle, but still wasn’t really wasn’t hitting my mark for funny.  It was time to hit up my first music act of the festival, Psychic Fair.

This was not only my first musical act of the festival; it was also my first visit to The Carleton.  In my head, this was a room to see some great mellow folk rock, never did I expect to see a band churn out a melodic college rock/grunge hybrid.  I detected some shades of Nirvana and Mudhoney in Psychic Fair’s crunchy, sludge-rock sound. Josh Salter had a definite Dave Grohl vibe going on, while Charles Austin was looking a little Novoslic-esque.  All in all, it was a tightly wound set, which I imagine left a few ears ringing in the Carleton.  It was a great intimate space, but I’m not sure it was the ideal venue for Psychic Fair. 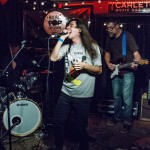 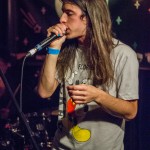 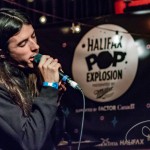 After I made my way back past the bar in the Carleton, I headed to check two other bands I was unfamiliar with, Unreal Thought and The Brood. I’ve seen The Brood’s name around town quite a bit, so it was a set I was certainly curious about.   When I arrived, the crowd was relatively sparse but Unreal Thought was about to launch into their set of melancholy chaos. It was a sonic lasagna; layered crunchy guitar, loaded with hearty amounts of feedback; distortion; sparse vocal; with a solid drum track draped overtop. Just like with most sonic pasta, it can be far too heavy and dense to be enjoyed properly. That was definitely the case here,  as Unreal Thought sounded like an aural abstract canvas as opposed to anything moderately enjoyable. It was definitely not for me. 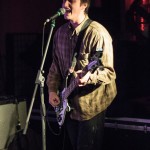 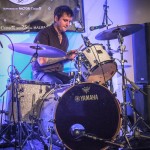 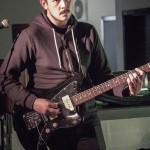 Once Unreal Thought had cleared the stage, it was time for The Brood. I was expecting something of the murky and gothic variety, I was happily surprised to find a funky rockabilly act. It took a couple of songs to clean the murk out of my ears, but once I did that I was thoroughly entertained by the charisma and talent exuded on stage. There was a confidence about frontman Seamus Erskine that I hadn’t experienced on the opening night of the 2015 Pop Explosion, and the support provided by Siobhan Martin, Billy Taylor-Habib and Matt Gallant was top notch.  Some bands find their way into a genre quite easily, but The Brood Isn’t one of those bands as they draw inspiration from a myriad of different genres; there’s definitely a healthy serving of funk, with elements of jazz, pop, psychedelic, rockabilly, blues and at the heart of it all, rock n roll.  When the Brood hit the stage at 11, they had the crowd grooving right along with them.  It was so infectious that while you may try to fight the urge to move, the groove just took hold and had you swaying along with the crowd.  I’d definitely like to see The Brood again, as this was a fantastic introduction. 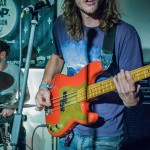 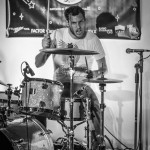 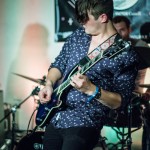 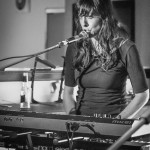 As the good vibes were still coursing through my veins, I opted to hang out to check a bit of Un Blonde’s set.  I was curious about the Prince comparisons and was wondering what exactly was going to transpire.  I didn’t expect a 19 year old kid wearing an odd fitting peach track pant and hoodie ensemble  to be the lead for this Montreal three-piece act.  By the time he strode to the microphone, his eyes were a tad bit red and glassy and he was noodling away on his guitar, but it appeared to be more of an experimental vibe, as it looked like he stopped and started a handful of times during the opening track.  To be honest, it felt like an artist who was trying to be pretentious (and succeeding) rather than just playing the music people came to see. Never have I witnessed such a diva-esque performance on stage, as front man Jean-Sebastien Audet requested tweaks to everything from the monitors to the house lights, and I’m not sure if it was in retaliation to the unfulfilled requests but Audet made a serious attempt to avoid playing to the crowd; he shifted his mic stand and body position in such a way as he appeared to either be avoiding the crowd or the searing houselights (which didn’t appear to hinder any of Unreal Thought’s set), and played primarily to the fairly vacant sides of the stage. As I stood there in the crowd, It struck me as odd so I pulled up some reviews to ensure this is what I was supposed to be seeing. All I could find was that Audet was a talented musician who has been playing in bands for a large part of his life and was described as something of a wunderkind. Unfortunately, it was the pretension that was being conveyed on stage that drove me to the door before the end of Un Blonde’s set, and it also overshadowed the obvious talents of an obnoxious musician (who had some serious virtuosity on the guitar). 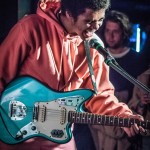 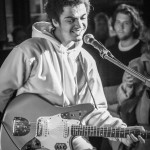 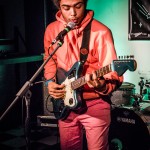 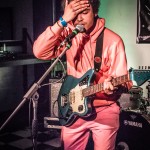