North by North East (NXNE) kicked off last night in Toronto. For those of you who don’t know, NXNE is pretty much a five day music festival featuring artists from a wide range of musical genres, coming from all over the world. What makes this festival so unique is that there is something for everyone to listen to, and you’ll probably come home from the festival with a few bands you haven’t heard before, but end up playing on your iPod afterwards. If you’re a fan of the Halifax Pop Explosion musical format, and you’re coming out to Toronto, you are totally gonna dig this festival.

Anyway, going through my travels in Ontario, NXNE just so happened to be going on at the same time, and since this is my first NXNE festival, I thought… why not check it out. Girlfriends & Boyfriends and Moon King played last night at the Horseshoe Tavern; Halifax Pop Explosion has a showcase going on tonight with Halifax’s Glory Glory and Vogue Dots, just to name a few. And tomorrow night, DIANA, Atlas Sound, No Joy and Warpaint are playing, all at different venues I might add. I don’t know how that is gonna pan out for me, but I’m gonna try and check out as many of those bands as possible.

Last night, I was at the Horseshoe Tavern, on the corner of Spadina and Queen Street West. How I was able to navigate through Toronto is beyond me, but once I got on the right road, with all the 20 to 30-somethings roaming the street I knew I was near the right place. If you haven’t been to the Horseshoe Tavern, it’s kinda like a spitting image of Halifax’s Marquee Ballroom, without all the shopping carts hanging from the ceiling. The vibe is very similar, and people are quite friendly at the shows. It’s something I’d expect from going to any venue downtown in Halifax. 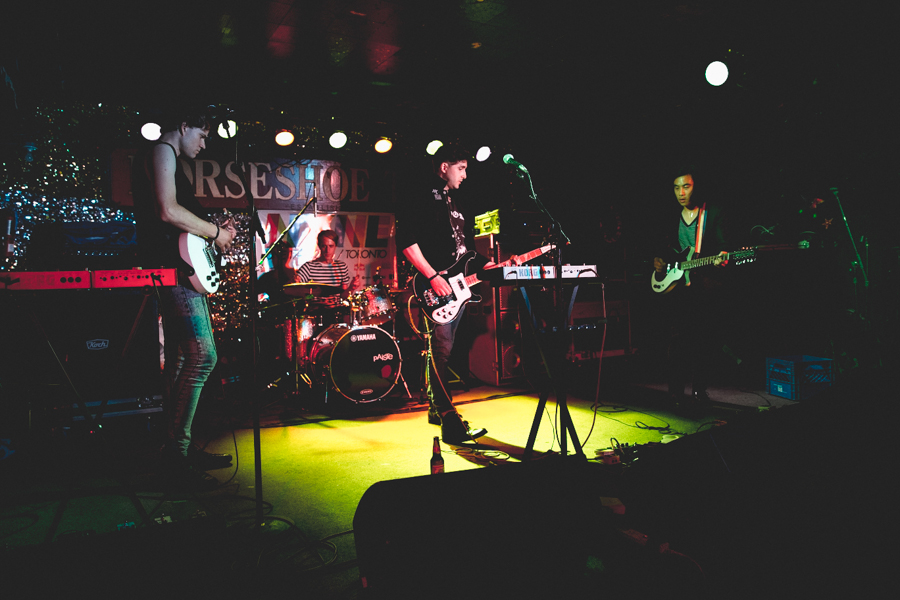 First band I got to see was Girlfriends & Boyfriends. They are tentatively a New Wave band, from British Columbia. Their genre was quite apparent when I was having flashbacks of the 80s while listening to them. If I could have gone 30 years back, I would have sworn it was Robert Smith of The Cure up on stage, in the spotlight. The vocals are similar, but the differences are how the lead singer carries himself through some really upbeat tempo. When I was listening to the band, I was hearing New Wave, and there were elements of punk thrown in. They had a good stage presence, and I was kept engaged throughout their entire setlist. My only regret of their show, was that this was one of those times where I was standing next to a merchandise booth, and didn’t pick up one of their albums. Ugh, yeah… total regret. 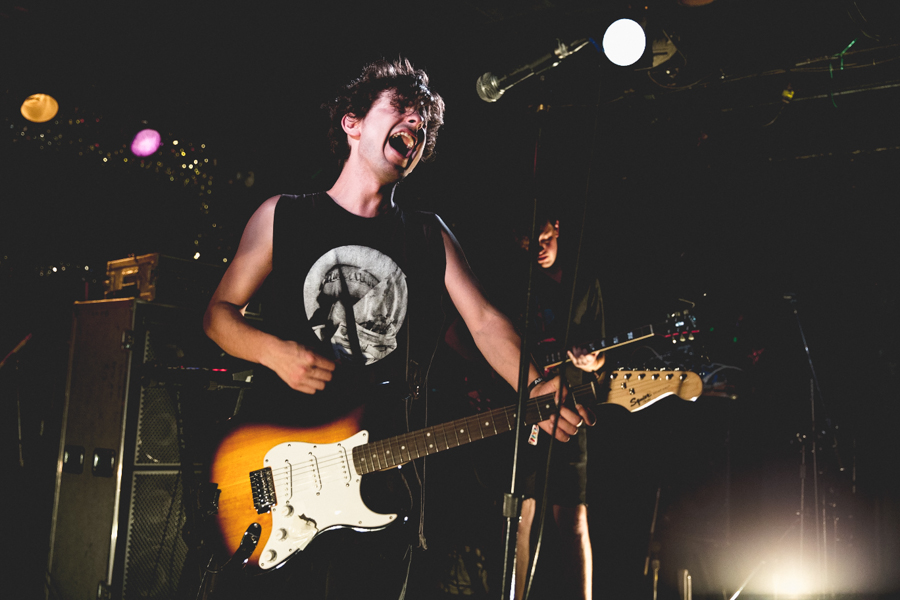 This is the band that sold me on the idea of hitting up NXNE this year. Moon King is a Toronto-based band, playing what I’d call some very spacey, dreamy rock music. Like literally, after repeated listenings of their 2013 Obsession album over the past few months, and their latest Secret Life album, if I could have a soundtrack for my dreams when I’m sleeping, this band’s music would be it. I could be daydreaming, and their music would put me into this enjoyable trance. If you get a chance, check their music out, or go to the extent that I did, and see them live.

Anyway, on to their live show. Within the first few minutes, this band was all out. I mean they were in full throttle, playing their music. The lead singer was all over the stage like some punk band, knocking over his mic stand, and yelling into the mic. I was thinking to myself… “is this the same band I’ve been listening to for the past few months?” I was expecting some dressed-up, proper, reserved band that would take the stage, and simply play their music. But these guys painted a new picture in my head, and they were just downright awesome. It’s one thing to sit back and listen to their music at home, and another thing to get out there, listen to their show, and be blown away.

They played a few songs I recognized, including one of my favorites, “Glass”. I don’t think they quite captured the essence of the song that is heard off of the album, due to the great production. But the song sounded really good when played live. I guess when it comes to playing live, sometimes the sound gets stripped down, there’s only so much you can do when you are playing in front of a live crowd. It’s like the band loses texture, but kinda gains this authenticity when playing live. I hope my explanation makes sense. Anyway, other songs like “Roswell” really sounded close to the album.

There were also a couple of other bands that were playing during my stint at the Horseshoe Tavern, like Jacco Gardner & Lower Dens. They both sounded great, but I didn’t get enough of a chance to check them out, well… not enough to pull up a full review on.

All in all, a good night of music, great way to start the North by Northeast festival. Tonight, I’m hitting up the Halifax Pop Explosion showcase at the Handlebar, downtown Toronto. Who’s playing you ask? Vogue Dots, Mardeen, Walrus, Glory Glory & The WAYO. Doors open at 7pm. It should be a good show.