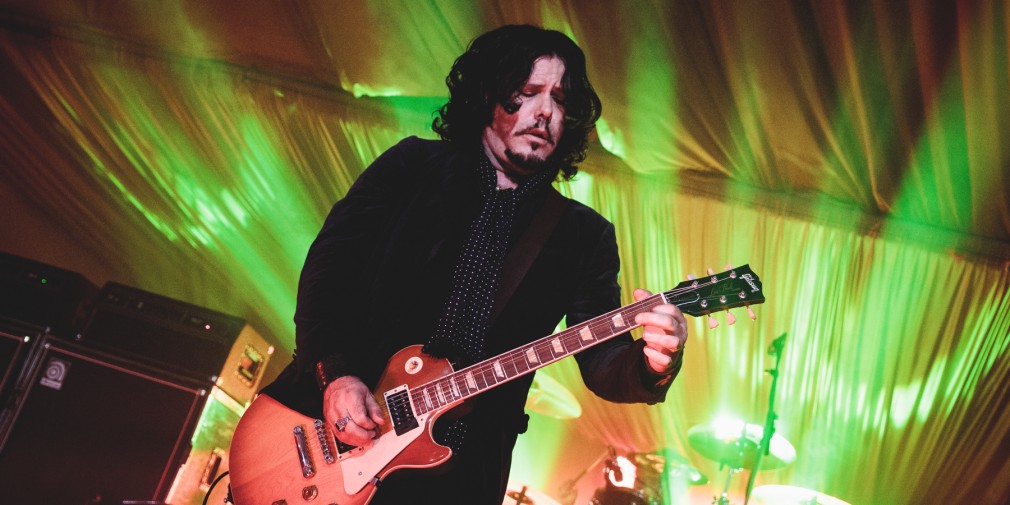 Let’s take it back to 2005: The Tea Party were on tour in support of their album, Seven Circles, playing a sold-out show happening at the Marquee’s Hell Kitchen. This was a band that was on top of their game when it came to playing live, but were on the edge of breaking-up due to creative differences. Yet, when they played, they threw their differences aside, and brought one of the most remarkable performances I’ve ever seen. I still remember how killer the guitar solo of the song “The River” sounded, and the intensity of a song like “Sister Awake”, that really gave goosebumps to me and the crowd. Fast forward 9 years to 2014, with an older version of the band playing at the Olympic Community Centre; but this time around, I’m having mixed emotions about their performance.

Where to start. Well, let’s start with Halifax’s own Alert the Medic, who opened up the show last night. For those of you who don’t know, Alert The Medic are a power-punk-rock band who grew up listening to The Tea Party. But at their shows, they’re the kind of band who attract a following of listeners who are in for an upbeat and cheerful time. The crowd at the Olympic Community Hall were sort of the opposite, a bit on the doom and gloom side. It was interesting to to see a few goths in the crowd, some metal-heads, and also there were quite a few drunks in the crowd, even before both acts stepped on stage. Remnants of the hard-rock arena of years ago, I felt quite young in the crowd, compared to shows I’d normally hit up. 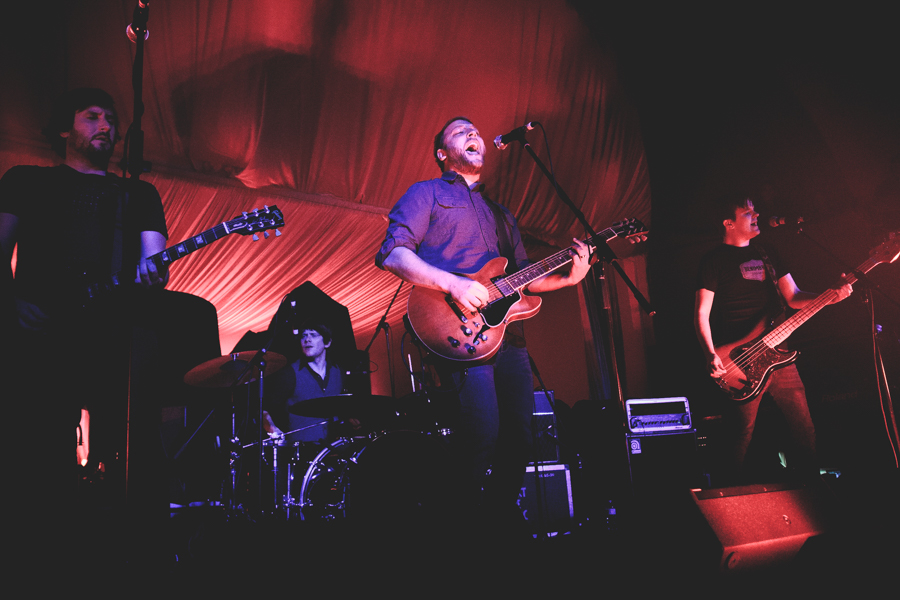 Anyway, back to Alert The Medic. I felt that they were catering to a more hard-rock sound that they are normally used to, when playing at their live shows. This is a versatile and colourful band in style, that really turned it up a notch to impress this darker, hard rocking crowd. They stepped up their performance in doing so, and it took a little while for the crowd to warm up to them; but eventually, by the end, the crowd came around with a good response. I thought it was quite funny that they ended their set with the song, “Echo & Fade”. It’s a really poppy song, that I think turned some heads last night. All in all, Alert The Medic was fun, their set was great, and probably much better in many ways than The Tea Party’s.

Onward to The Tea Party‘s set, to a modest crowd of music goers. They opened up with the first track off of their new album The Ocean At The End, with the song “The LoC”. I just gotta say, “awesome!”, perfect song to open your set and get the crowd involved. It’s an upbeat song that’s quite reminiscent of the Led Zepplin era of classic rock, that has highly influenced The Tea Party in some of their earlier work.

The second track to play was “The Bazaar”, one of my personal favorites, and also an old favorite to Tea Party fans. I really wanted to like this song, but the guitar & bass playing was just off tempo. I don’t know if the lead singer/guitarist, Jeff Martin, was taking a backseat when it came to playing the verse and chorus of the song, due to just focusing on vocals. But man, they didn’t do this song any justice.

Next up, “The Black Sea”, another track off of their new album. I also want to make note that they played quite a few songs from their new album, and all of them were quite impressive, including this one. Stylistically, they were quite comfortable playing this song. Musically it was a treat to listen to. The many transformations through verse and chorus made this song amazing. I think they really hit their niche when they played this.

After that, they played one badass version of “Fire In The Head” which really brought the atmosphere of the Olympic Community Hall to a halt. This is one of their songs, that I’ve mentioned before, that is so intense when listened to live, if not already intense enough off of their album. If there was one song from, their older library, that I could walk away with happy from last night, it would have been this song for sure. And also the song “Psychopomp” too, that they played after, and was just so mystical.

The next song to play was “Lullaby”, and like I said before about syncing tempo issues, this one had a lot of them. Also the weird sound effects, that they were playing during the solo, were just absolutely horrible. They should have just left this song at home.

“Water’s On Fire”, easily one of the best songs of the night brought the atmosphere to a mellow frenzy. It was beautiful, and Jeff Martin literally played the crowd like a orchestra. The crowd responded, and there was a lot of back and forth singing that was simply amazing. And what made the song bittersweet, was that during the outro, they tacked the outro to the song, “Release”, one of my personal favourites, into it. I loved every second of it.

Here’s the issue of the night, that came up during the song “Save Me”. I mean, the song itself was great. It had a lot of flange in the guitars, Jeff Martin pulled out a bow from a violin to play his guitar, and there was a pretty nice solo that came out of it. Those of you who were there, that can’t remember, he played the Christmas song, “The Little Drummer Boy”. It was cute. But here’s where the issues came out: the lead singer had lost his voice during the song, and the set was cut short. 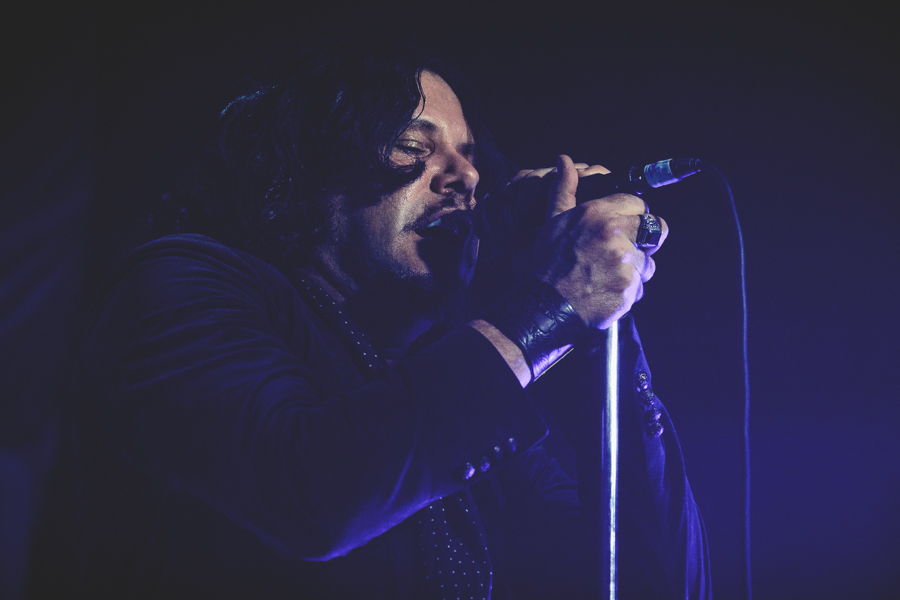 But man, he did soldier through though. The band decided to switch up their setlist, and started playing the song, “The Ocean At The End”. The very dark and depressing effect that this song had on the crowd, made me really feel sorry for the guy, for losing his voice. As subtle as the solo was, it was pretty amazing. And it’s not every time that the best songs that are heard live are the ones that are digging deep within the band’s catalog.

After that song, the band left, and came back for an encore with the song, “Temptation”, which had an amazing guitar solo. They pulled out all the stops for this track; featuring an insert halfway, with the song “Transmission”, which had been requested from a fan in the crowd earlier. Was that planned? I don’t know. But that, to me, was pretty sweet of the band to take into consideration, when the unfortunate had happened.

The band was later unable to keep performing due to the unseen incident. I was kinda disappointed that they didn’t get to play songs like “The River” and “Sister Awake”, that were originally planned as encores, but sometimes shit just happens. It was good to see the boys in action again though.

So… where does this take the band now? I’d like to see them once more come to Halifax; but that probably won’t happen, it took them 10 years to come back. I guess that’s the result of them being on hiatus for that long. And with that in mind, they are starting to show their age when it comes to their live performance. On a positive, their new material is excellent, especially when performed live. I think this might be a new chapter for the band, and hopefully they’ll stick around for much longer.

Thanks to Sonic Concerts for putting this show together. For more Halifax music reviews, and content, keep it locked and loaded to HAFILAX DOT COM & Halifax Bloggers. See yah!