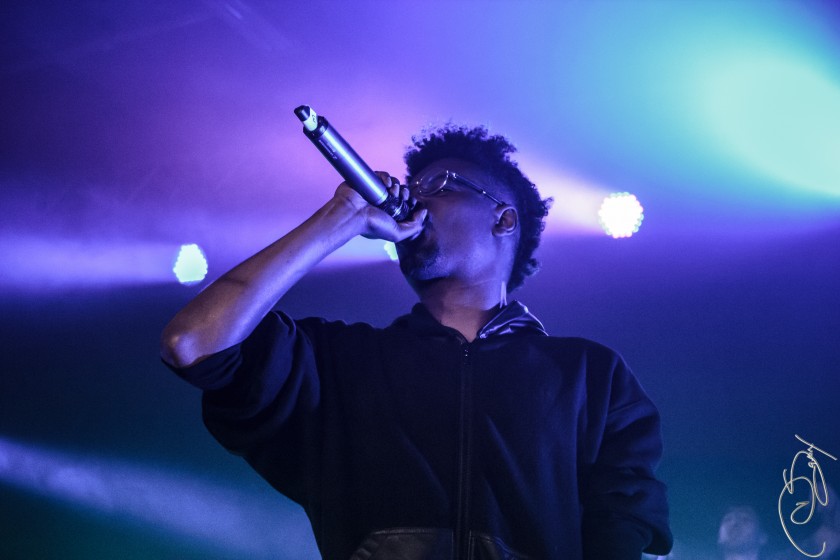 Even a seasoned concert goer has to take a knee and recharge the batteries during HPX week, and that’s exactly what happened on Day 4 of the Fest. There weren’t any big shows I knew I’d regret missing (aside from Jen Kirkman’s first HPX set) so it was a rather safe bet. I did follow along on social media to uncover who was headlining the pair of Secret Shows that evening (Badbadnotgood and Ryan Hemsworth), and I managed to catch up on some much needed sleep so that I could fully enjoy a jam-packed Day 5 of HPX2014. 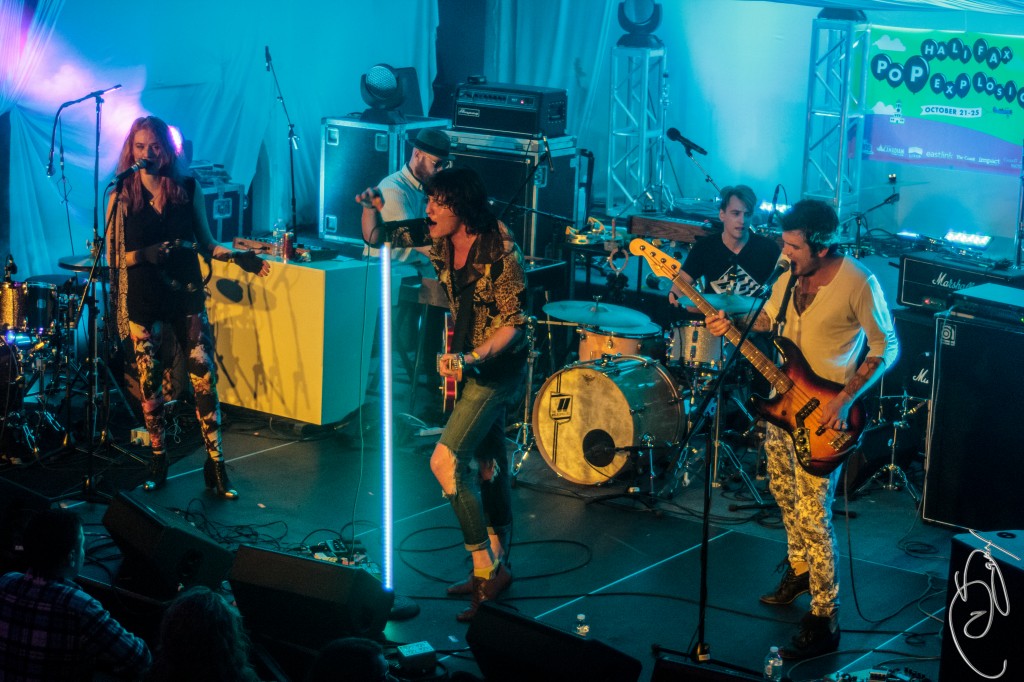 To kick off the final day, I headed to the Olympic Hall for the free show which featured the only HPX date for The Gay Nineties and the first of two sets by Canadian super-group The Mounties. I got there fairly early, as I expected the venue to be packed to the rafters, however upon arriving I could clearly see it was criminally under-attended. 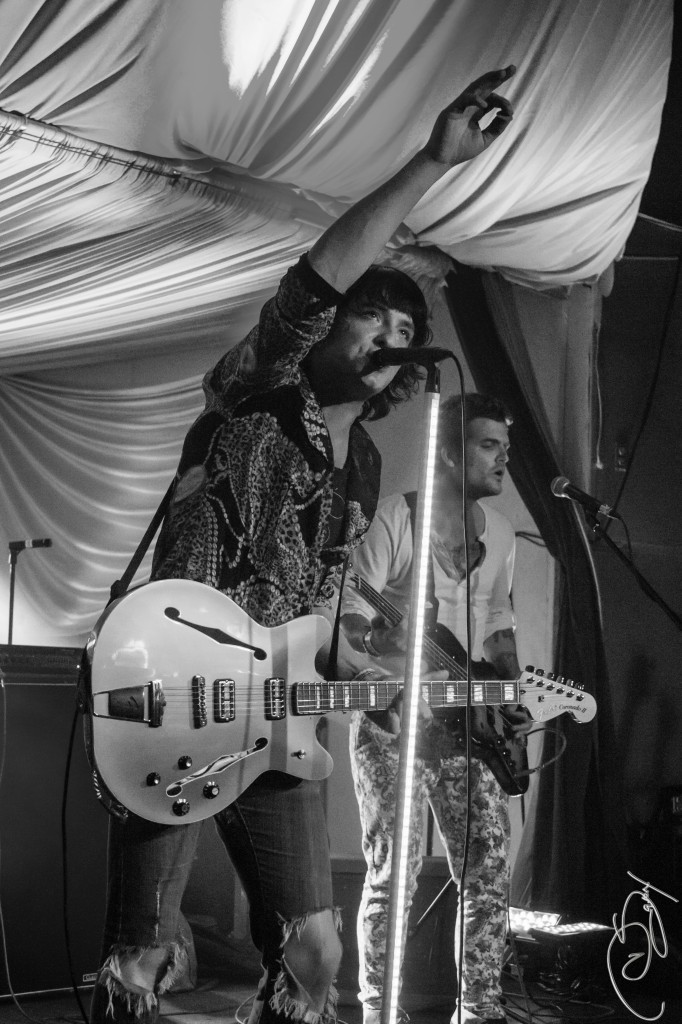 Fortunately, the sparse crowd didn’t deter the Vancouver-based band from imprinting the audience with its brand of indie psychedelic pop-rock. Considering it was only 4 in the afternoon, the Gay Nineties held nothing back and treated the meagre audience to one of the most electric performances of the festival. Parker Bossley and company were easily the biggest surprise of the fest due to their power pop tunes and the charisma which Bossley and company had in spades; they may not be massive rock stars at the moment, but they definitely had the swagger down for when they became massive stars. If you passed on this free show, you should definitely have some regrets now. It was cool to see Steve Bays and Hawksley Workman watching the proceedings from the side of the stage, especially when the Gay Nineties busted out a cover of Tom Petty’s “American Girl” to close out the set (a choice which was somewhat controversial, as some folks felt a band should close on their own material). 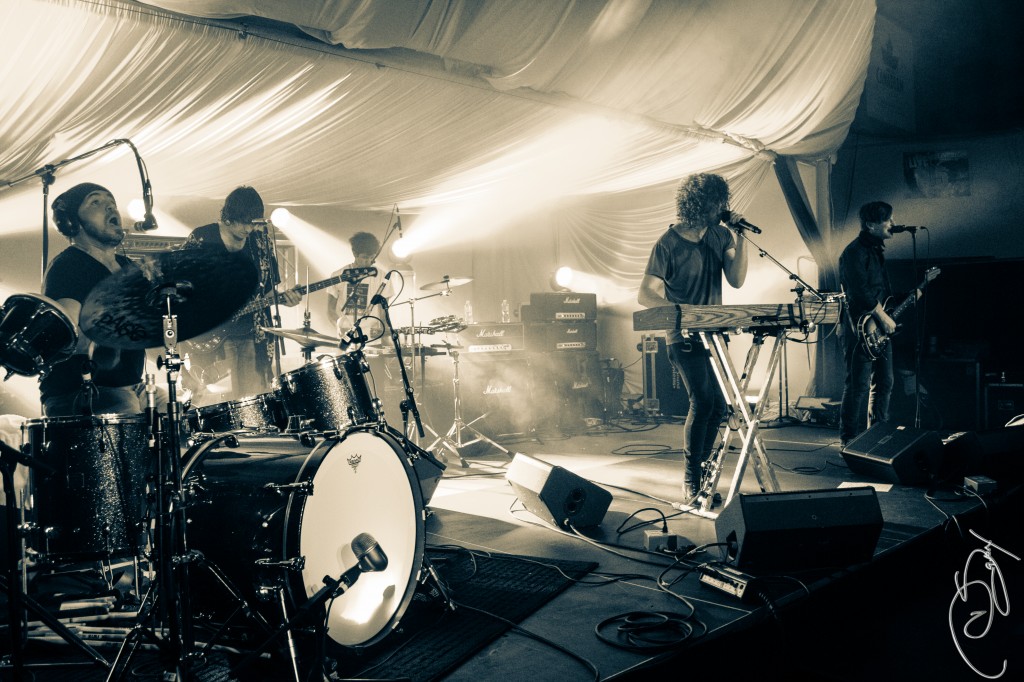 After a brief changeover, it was time for Canadian super-group The Mounties. Comprised of Steve Bays (Hot Hot Heat), Hawksley Workman, Ryan Dhale (Limblifter, Age of Electric) and Parker Bossley (Hot Hot Heat, The Gay Nineties), the band launched into “Pretty Respectable” from its debut album Thrash Rock Legacy and never looked back. Working through the lion’s share of that album, the band bantered both with the audience and amongst themselves, and absolutely dominated the stage with their power indie pop sound. These were songs that felt new, exciting and familiar (like an old friend you hadn’t seen in a few years), but definitely drew from the band’s varied background while remaining firmly in the indie/alt-pop-rock realm. It was great to hear my personal theme song “Headphones” get a warm reception from the crowd. Needless to say, The Gay Nineties and The Mounties served as a great one-two punch to kick off Day 5. 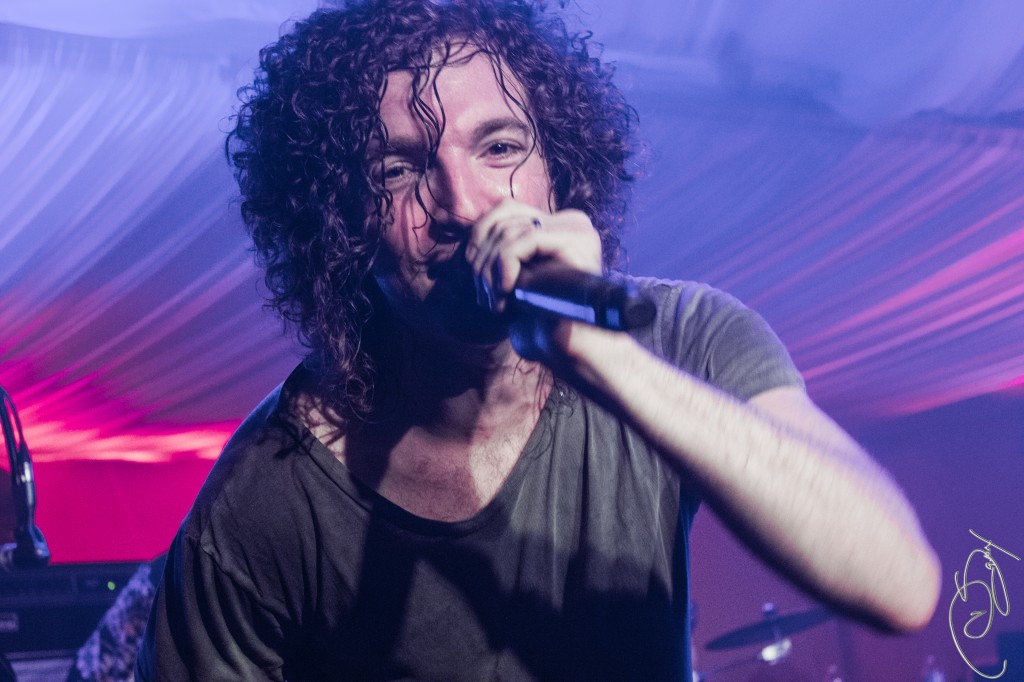 Once the band headed off stage, I made tracks for the Company House to ensure I would be in attendance for that night’s comedy showcase which featured local favorites Meaghan McDowell, Mark Little and headliner Jen Kirkman (@Midnight and Chelsea Lately). I knew that the comedy shows earlier in the week had been packed to the rafters, ultimately leading to a non-capacity room (aka I wasn’t gonna be getting in), so I planned to get there early and carve a solid 3 hour chunk out of my day to ensure I was there early enough to get a decent seat so I could check out the sets from the opening comics and ultimately Kirkman’s set. 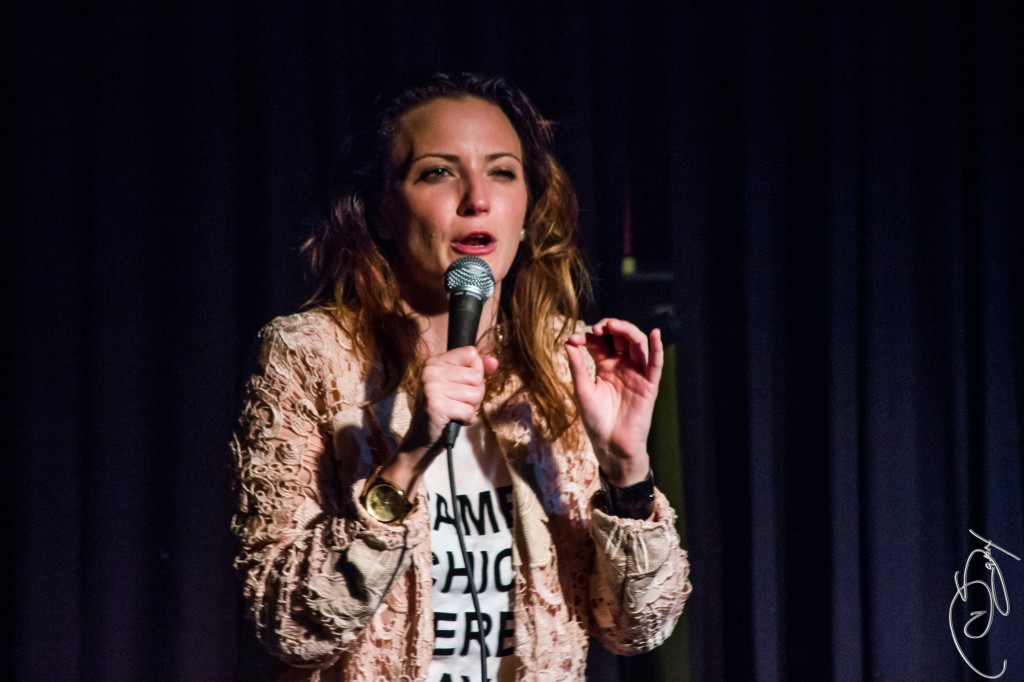 The lead-up to the show featured one of the most expensive domestic beers (Rickard’s Red) that I’ve ever purchased, and the pleasure of sharing a table with a clearly affectionate (albeit tipsy) couple (one of whom proceeded to spill a beer on the same surface on which my DLSR camera and iPhone sat), but as the emcee Adam Christie took the stage my hostility waned. 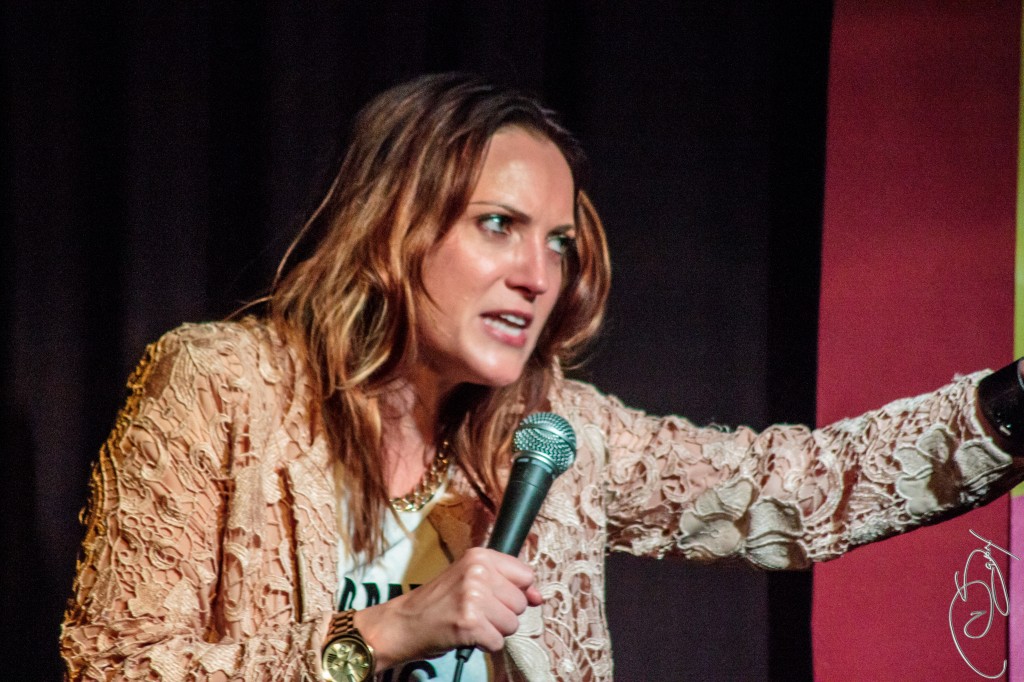 Christie did a great job as the director of the evening and he kept things moving along while working in some hilarious material (at times his set reminded me of Brian Regan). Over the next hour Abdul Butt and the aforementioned comics took to the stage with somewhat mixed results (I would have liked to see more new material from McDowell), but it was all worth it once Jen Kirkman hit the stage and launched into her highly entertaining hour-long set. She regaled the audience for a full hour, touching on relationships, life after divorce and her experiences in the wild as a cougar. It was definitely worth my time, and I was glad I was able to catch at least one of her two sets at the festival. From here, it was time to trade in my beer bottle for a cup of coffee before heading off to the Forum MPC. 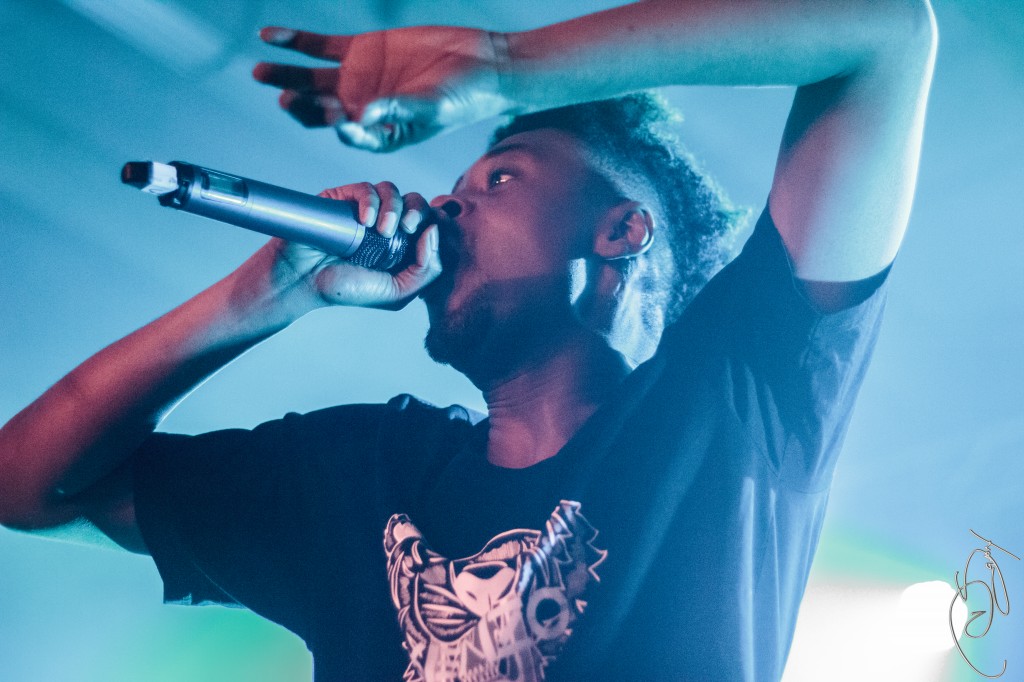 As it was after 8pm and I was suitably caffeinated, I headed into the Forum MPC. The venue was buzzing with the largest crowd I had seen all week, something that surprised me to an extent.  In thinking about it, the bill did include local EDM heavyweight Ryan Hemsworth, who just happened to be on stage plying his craft of creating mind-bending aural soundscapes when I arrived.  It was a great background vibe, but in the interest of integrity, it was doing very little for me. As talented as Hemsworth is, I was more pumped in anticipation of Danny Brown’s set.  The crowd was right there with him, grooving along with the vibe Hemsworth was putting down. 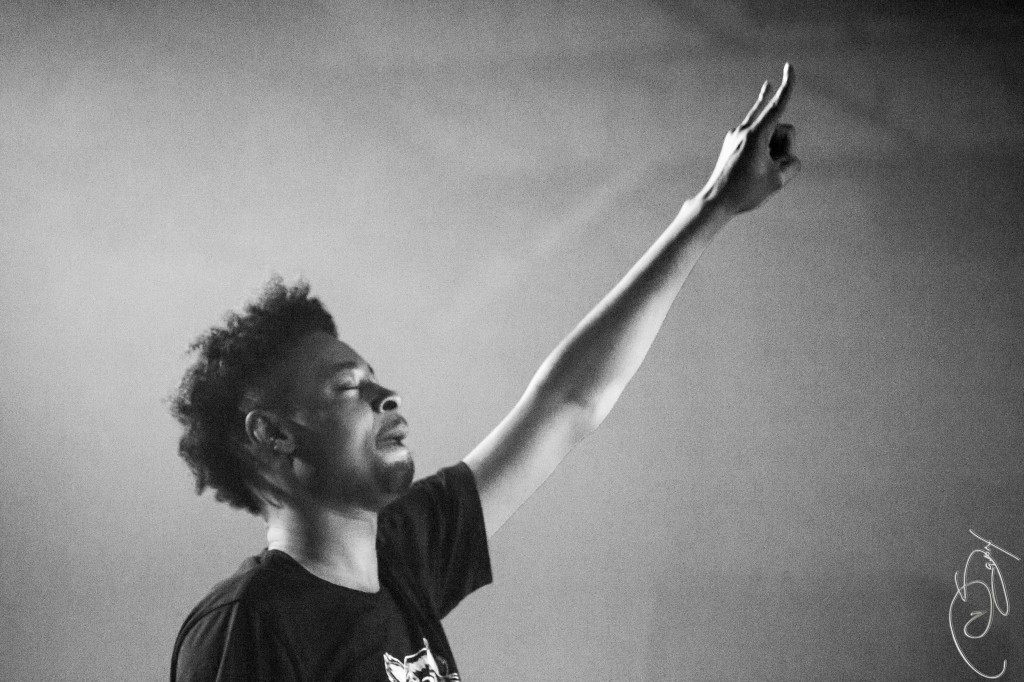 Danny Brown is a critically acclaimed emcee who is rooted firmly in the hip-hop underground.  His silver-tongued flow is rivaled by few emcees (see Kendrick Lamar and Childish “Donald Glover” Gambino).  It was great to see that people were appreciative of what the Halifax Pop Explosion folks accomplished in bringing Brown to town, as it was on par with the Jazz Fest folks landing St. Vincent earlier this year. 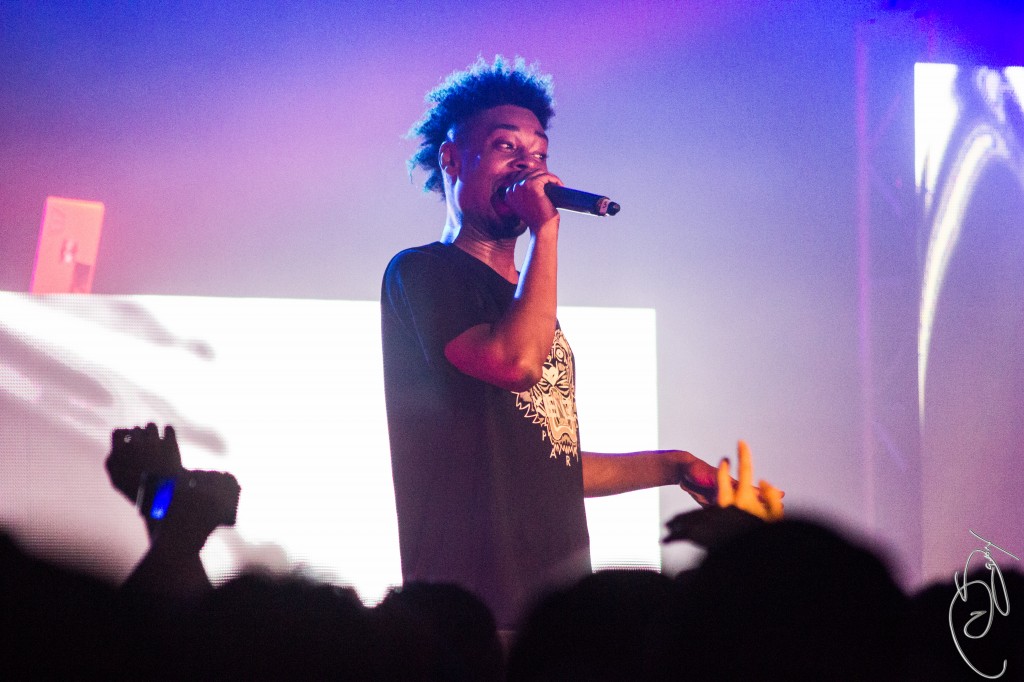 While it has been over a month since Brown’s set, my brain is still struggling with what exactly it experienced on Day 5 of the HPX. Danny Brown might in fact be hip-hop’s answer to Dave Chapelle, right down to his somewhat squeaky delivery.  His set crackled with an electric intensity as he churned through fan favourites “Smokin’ and Drinkin’”, “Kush Coma” and “25 Bucks”.  Brown is clearly on the top of his game and continues to grow stronger with each subsequent release; most recently he popped up alongside Eminem on Em’s latest offering “Detroit Vs. Everybody”.  With the typical festival problems, I headed off to the downtown core to see what was going on at Danny Brown’s after party as I wanted to catch Quake Matthews, Ambition and Dub Kartel. 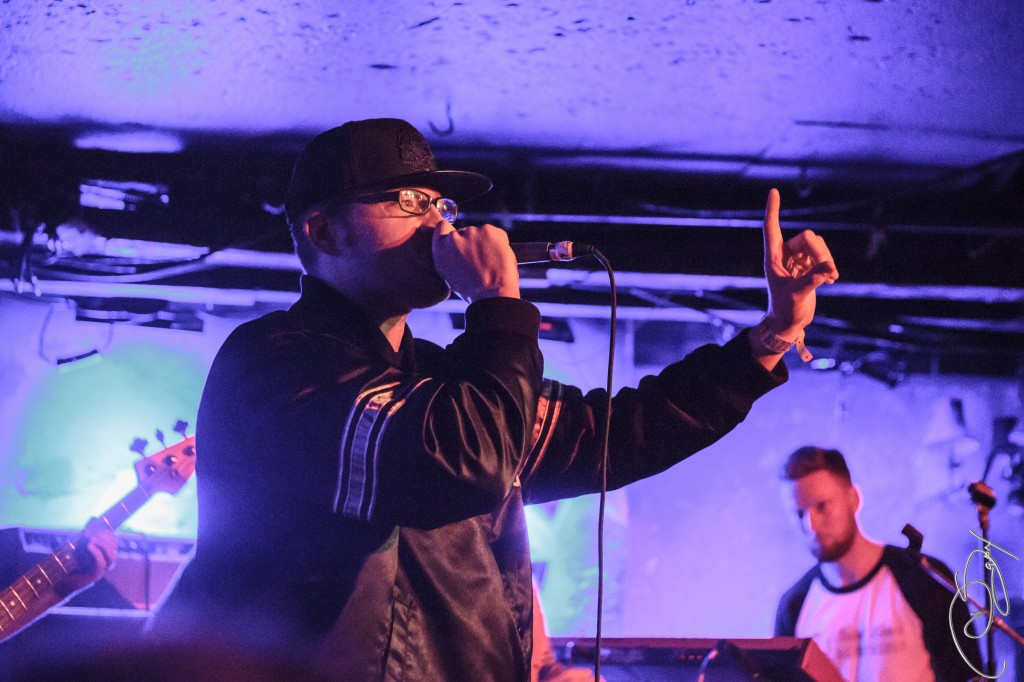 Arriving at the Seahorse, it was clear that the festivities had yet to kick off, so I headed back up those steps and set off towards Reflections to meet up with Justin and Jeff who were awaiting the midnight set from The Mounties (you can find Justin’s review of the show here http://bit.ly/11kGSl9). I was lucky enough to catch the end of Ain’t No Love’s set, and while I wasn’t familiar with the band aside from Justin’s endorsement, I was quite impressed with their brand of electro infused hip-hop and wish I had been there for their full set. 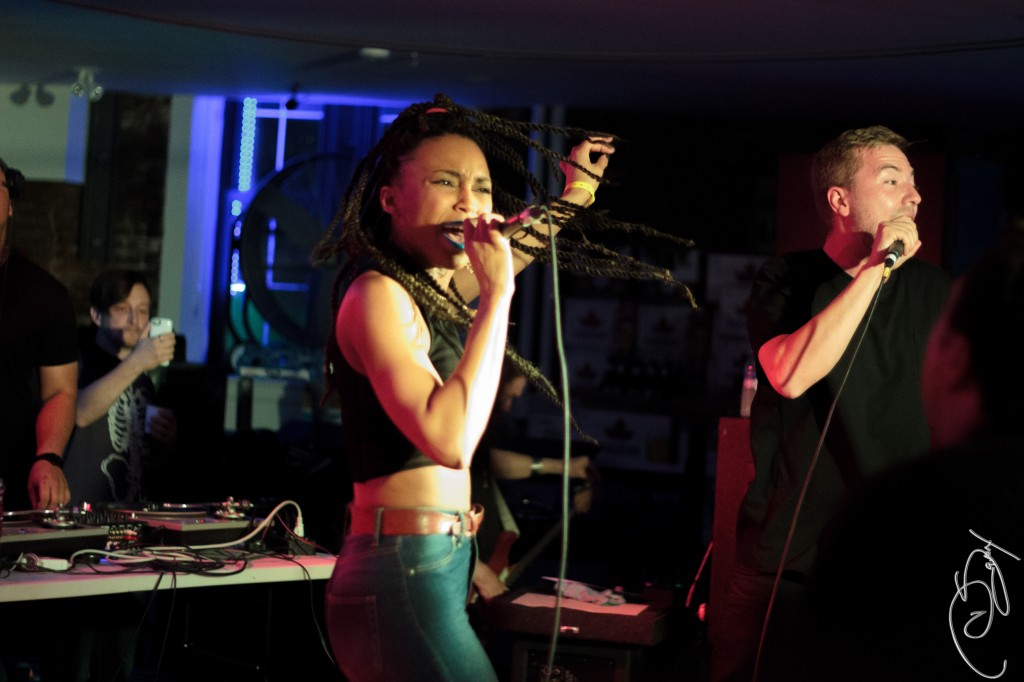 As Ain’t No Love wrapped up their set, I felt a tap on my shoulder and lo and behold it was Jillian Comeau of Like a Motorcycle (LAM) telling me that I did good work.  I was somewhat perplexed, as we had never formally met, however we shared a good laugh as she mistook me for the site’s lead photographer Justin (as we both had spiky hair and were sporting a HAFILAX.com shirt).  I introduced myself to Jillian and Kim Carson from LAM, and unfortunately my beer issues were transmitted to Kim as her beer took a header once she switched hands to shake my outstretched mitt (sorry Kim).  After that awkward interaction, it was time for me to cuddle up to the security guard positioned at the edge of the stage (there wasn’t a lot of space in which to maneuver, hence the cuddling). Then for the second time that day Hawksley, Parker, Ryan and Steve hit the stage to play cuts from their debut album. I hung around for a few songs, and then dropped a smoke bomb and headed back to the Seahorse for the Danny Brown after party.

When I got back inside, the party was in full swing and Dub Kartel and Quake Matthews had the joint jumping.  The Dub Kartel are quickly becoming one of my favorite live acts in Halifax, as their brand of hip-hop infused reggae makes for an excellent party-starting soundtrack.  Quake Matthew’s razor sharp flow continues to impress as does Halifax (by way of Sack Vegas) emcee Ambition’s deft skill on the mic and, as good as they were, the true standout of the evening was the surgically precise flow that Charlotte Day Wilson (of The Wayo) spit on stage.  As good as Quake and Ambition are, Charlotte proved that she’s an equally talented emcee.  After seeing the acts I came to see, I opted to head to the Marquee to hit one last show before calling it a night and closing the book on HPX2014. 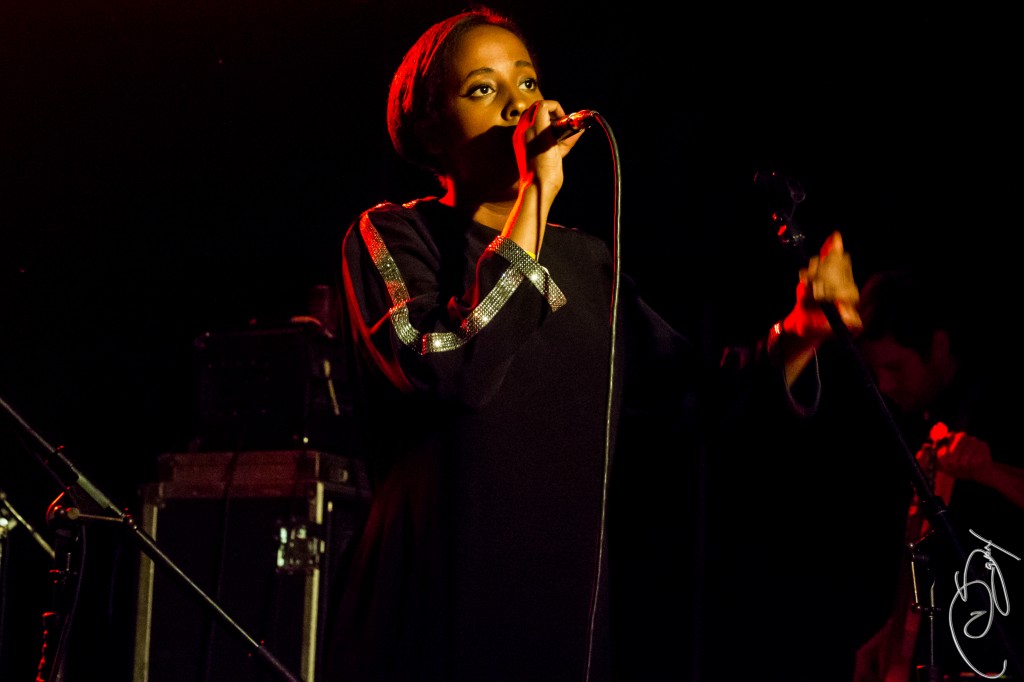 Fortunately, the late night Cold Specks show was as well attended as it could be, considering it was coming up on 2AM. I headed in and caught a couple of great genre-bending tunes which soared high and filled the the Marquee with a distinct Gospel inspired folk feel.  I didn’t stay all that long, as it had been a long day and my batteries were running low, so after checking out a couple of impressive tunes, it was time to call it a night. It was a great week of fantastic music, but as they do, all good things have to come to an end, and 2:30 in the morning felt like the right time to end my time at the festival.