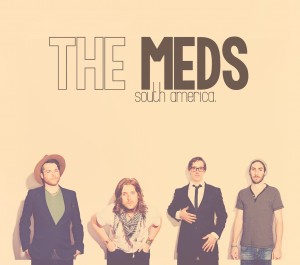 Earlier this year, PEI-based band The Meds released their debut full length record entitled South America,  and late in September unleashed the video for the album’s title track (which premiered on Canada AM).  While the band is based in a region of the country which has been a musical hotbed in recent years, this is an album which doesn’t bear a lot of the same ear markings as a lot of the material which is released from these parts.  This isn’t to say there aren’t some points in which you can hear elements of a couple other East Coast acts, but for the most part this is an album that isn’t going to find itself being easily pinned to this region.

There are albums which become increasingly grating by the third and fourth play, but this is not one of those albums, and with each additional spin the album begins to reveal different facets and starts to really grow on you.  I will admit my first experience seeing the Meds was not necessarily a positive one, and I was a bit trepidatious upon my first listen of South America, but what struck me was the strength of tracks such as “Dial Tones”, “Lonely Man” and “South America”  and it allowed me a develop a new appreciation for the band.  That first night could have been a case of a band needing some seasoning, or just one of those nights where I wasn’t in the mood for their brand of moody, pop-infused rock, but this album has erased that initial encounter and has far exceeded it. Fans of acts such as Wintersleep, Manchester Orchestra , and Matt Mays will find themselves in their wheelhouse here.  South America from The Meds is an album you need to discover today as it is one of the strongest albums to come out of the Maritimes in 2014.