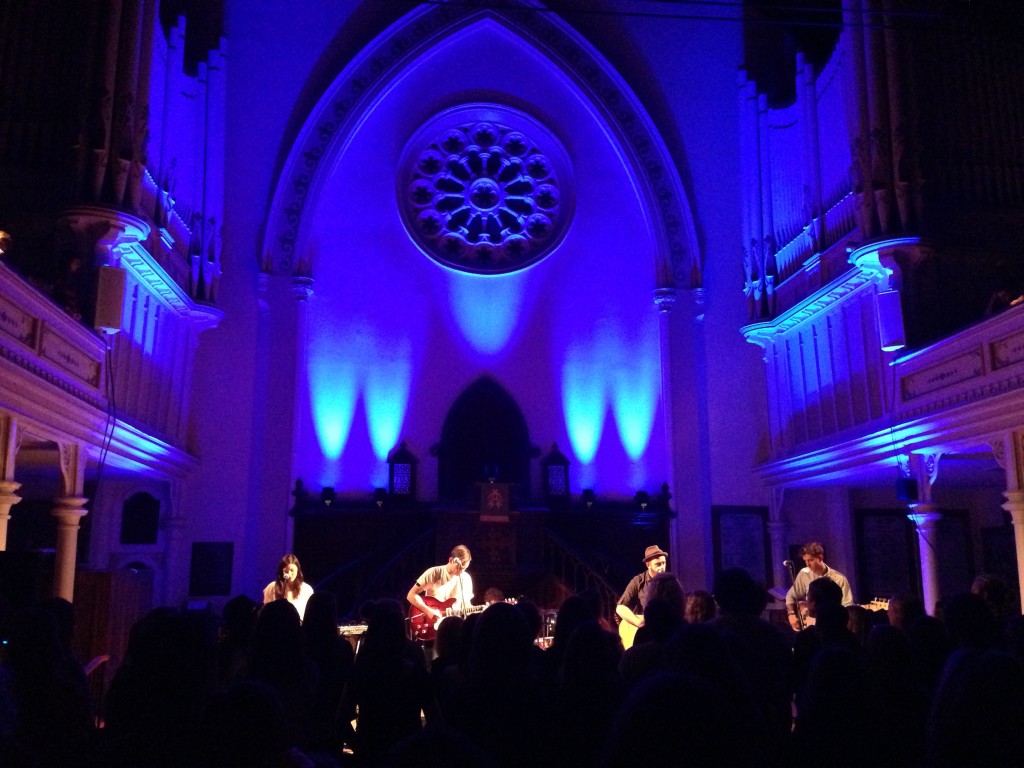 Let me preface this entire review with an important piece of information, integrity is important and the truth can hurt. Without that honesty, we’re just passing out participation medals and that breeds mediocrity. The criticism from the writer/crowd only serves to improve the band and the crowd’s experience the next time out. I know from HAFILAX, we’re writing from our point of view and we ensure not to make it personal. Sometimes, the expectations which we have, fall well short, and that is what we have to talk about in our review. With all of that being said, let’s get into Friday Night at St. Matthew’s Church with Said the Whale and Alvvays.

When I arrived at the Church, I was legitimately shocked to see the lineup stretching quite a ways down Barrington Street. I was going into this show with little prior knowledge of Said the Whale aside from the singles played on Live 105 and the like, I knew of the opening act but that’s as much prior knowledge that I had. This was more of an extension of the HPX experience, going in blind and hoping for the best.

When Alvvays strode to the alter of rock, I wasn’t expecting an opening act, so I hit google to find out who I was seeing/listening to. Surprisingly (or maybe not) Alvvays wasn’t listed as support on the Said the Whale site and it was only due to an article on www.thecoast.ca that I learned that Alvvays [pronounced Always] (seriously, double v’s ?!) was the band on stage. Sadly, it wasn’t even one song into their set when the sound issues (which would plague the night) reared their head. The sound was so murky that the lead vocals of which the band’s brand of shoe gazing indie rock (think slightly poppier Mazzy Star ) is founded, were completely buried under every other instrument and then a few blankets of bass. The sound was far too thick which muddled what might have been a decent set otherwise. The most frustrating part was when the instruments dropped out, the vocals sounded clean and clear, but that notwithstanding, Alvvays was not for me in the slightest as I was incredibly bored for the duration of their set. Unfortunately I know that sentiment was shared between the five folks in our row, as we turned to our phones to be entertained to ensure we were still awake when Said the Whale took the stage. (Our role drew the ire of the front woman who thanked the crowd for staying off of their smartphones – note that two of the five of us are music geeks/critics, and two more are musicians with sound board experience).

Had the sound been better, this would have been an ideal venue for the band, and the bright spot was the drummer as he was great and looked like he was interested in being there. I can’t say the same for the rest of the band, as they appeared disheveled and disengaged, look like you want to be there on stage and not like you just rolled out of bed. I’m not saying sign a contract with Hugo Boss, but don’t grab the first shirt on the floor and hit the stage. Granted there may have been travel issues, but you know you’re hitting the stage when you get to town. All in all, Alvvays failed to impress and whether or not that was partly to blame on the sound man is irrelevant, their brand of atmospheric navel gazing indie rock was not for me.

The opening act definitely sparked some discussion between our group about the sound issues and that helped pass the time, but it was now time for the headliner Said The Whale.   Hailing from Vancouver BC, this quintet has been riding high on the success of their latest release Hawaii and the single “I Love You” (which has been getting steady airplay on local station Live 105.3FM).    Personally, it was on the strength of the singles “Heavy Ceiling” and “Loveless” which brought me here, and they didn’t disappoint [even though they (to a lesser extent) were hampered by technical difficulties], but it was the folk-pop tunes (such as “Curse of the Currents” and “Helpless Son”) which really caught my ear on this night (and were better served by the venue) and really drew me in once the bass and keys dropped out.   It turned out to be something of a case of the band having a degree of a split personality as one wanted to be an radio friendly indie pop-rock unit which the other yearns to be a folk-pop entity, which for me was the more interesting of the two.  I made a mental note to dig deeper into Said the Whale‘s catalogue upon hearing the range of their material.

The first of two moments which made the night truly stand out for me, involved seeing drummer Spencer Schoening sheepishly take to the microphone for a powerfully quiet acoustic number which gave me chills and reminded me a lot of Ben Folds (I still haven’t been able to determine what the name of that track was. UPDATE: as per the band’s twitter account it was “Seasons”), it was one of those special, concert-defining moments.  The other was more unexpected as the band busted out a cover of Father John Misty’s “Hollywood Forever Cemetery Sings”, which unto itself is a great tune which didn’t appear to be well known among the Halifax crowd.  It was a great cover served as the other highlight of the night for me.

As it turns out, Said the Whale almost didn’t make the show in Halifax due to a windstorm in St. John’s which almost prevented the band’s plane from taking off.  As such they were late arriving to the venue, which led to an abbreviated sound check which led to the sub-par sound which plagued the evening.  While the sound seemed far too thick and muddy for the venue, not to mention the vocals being mixed so far down on the list, it was all part and parcel of the short sound check, which under the circumstances is completely understandable.  Personally, I walked away enjoying the set as a whole and knew that the sound issues were an anomaly (stranger still was the fact that this was the 2nd non-HPX show I saw in the past month which had sound issues), and I will definitely be in attendance the next time Said the Whale is in town.